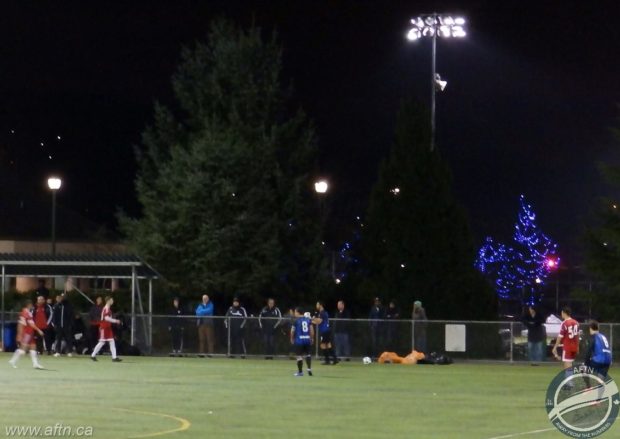 Turkeys have been eaten. Alcohol consumed. Crackers pulled. So that can only mean one thing. Christmas is over and the Vancouver Metro Soccer League is back in action again after the break for the festive period.

And the VMSL came back with a bang this past weekend, with the six Premier Division matches producing 24 goals between them, leaving the top five teams separated by just three points.

The top three teams were all in action on Friday night, and while they all finished the night unbeaten, it was West Van and Croatia SC who were the big winners, with Rino’s Tigers dropping two points and losing their place at the summit.

West Van moved into sole possession of first place after a 4-0 win at Minoru Park against Richmond FC Hibernian. The Amblesiders took the lead 13 minutes in on an own goal and that’s how it stayed till an action packed second half.

Keith Jackson doubled West Van’s lead three minutes before the hour mark, then grabbed his second, and the visitor’s third, in the 74th minute. Jevin Hills put the icing on the cake with six minutes left.

Croatia kept in touch in second, one point behind West Van, after a comfortable 4-0 win of their own against Pegasus at Newton thanks to a brace from Daniel Davidson and goals from Kyle Kemp and Amara Jr Toure.

Davidson fired Croatia into the lead in the first minute and that was how things stayed until the second half. Kemo doubled Croatia’s lead three minutes after the restart, and then three minutes after that it was game over when Davidson hit his second and Croatia’s third. Toure rounded off the scoring in the 77th minute to secure a comfortable three points in the end.

While those two teams faced off against sides at the bottom end of the table, leaders Rino’s Tigers had a more difficult task at hand against a Club Inter EDC Burnaby side that still harboured some title aspirations of their own. 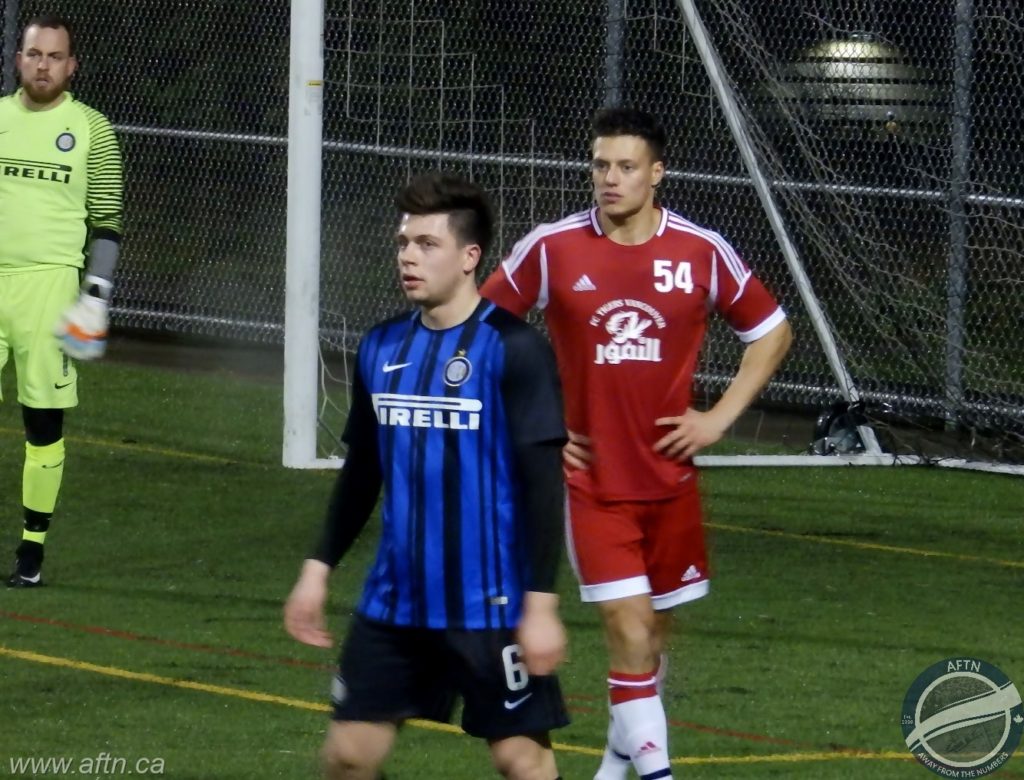 And it was the Burnaby boys that came out all guns blazing in the first half, launching wave after wave of quick counter attacks after stripping Rino’s of possession. The amount of times Inter striker Mohammed Habib was caught offside in the first half was incredible, as the Tigers three man defence diced with destruction.

But Inter only had one goal to show for all their efforts come half time, Habib finally getting to run in on goal to finish an 18th minute chance.

Rino’s Tigers came roaring back into the match after the restart, invigorated by the introduction Matteo Polisi. The SFU Clan striker is just back from injury and showed the difference maker he can be from the moment he came on around the half hour mark, and he certainly made Rino’s tick in the second half.

Polisi was brought down for a penalty in the 67th minute and picked himself up to slot home the equaliser.

At that stage you felt Rino’s would go on and secure all three points, but it was Inter who found another gear, coming close on a number of occasions but unable to find the killer second goal and having to settle for a share of the spoils.

You can see both the goals and some other highlights from the match in our video below:

The result won’t have helped either team and those could be two huge points dropped by Rino’s in particular in their quest for a first VMSL Premier crown. With very little to choose between the top teams, every point counts massively right now and there is going to be little room for error between now and the end of the season, especially with a couple of the chasing pack having games in hand.

And two of those teams were in action on Saturday.

Burnaby Lake was the setting for the first match of the afternoon, with pointless Campo Atletico hosting title chasers CCB LFC United. 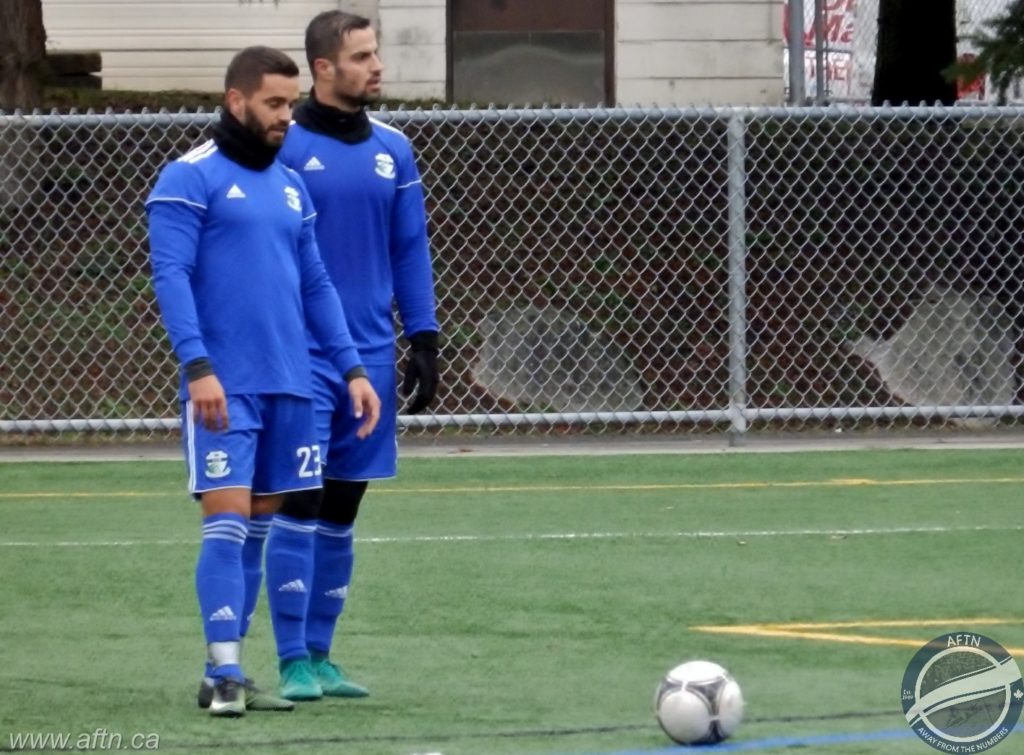 CCB were rampant in this one and played some of the best football I’ve seen in the VMSL all season as they ran out 7-1 winners and had some goals called back for offside along the way.

Ajeet Bains headed CCB in front in the 20th minute, diving to head home from close range after Victor Blasco’s free kick came back off the right post. And 15 minutes later, after piling on relentless pressure, the Surrey side’s lead was doubled when Blasco fired home from the spot.

Two goals in a three minute spell from former Whitecap Yassin Essa saw CCB head into half time with a 4-0 lead, and you feared a rout was on.

Full credit to Campo though who didn’t let their heads go down and kept fighting till the end, despite having very little firepower up front, and they pulled one back five minutes into the second half when CCB’s keeper fumbled an easy through ball and Santiago Sanchez poked home the loose ball.

But CCB just upped their game once again and added three more goals, with Blasco grabbing his second in the 68th minute, and Andy Phillips and Milad Mehrabi adding a couple more in the closing moments of the match.

You can see all seven of CCB’s goals and some other highlights from the match in the video below. We unfortunately missed Campo’s goal as it had seemed pointless filming their attacks by that stage!!

There was a Surrey derby at Newton on Saturday evening, with defending champs BCT Rovers Tigers United making it four wins on the bounce with a 3-1 victory over Guildford FC thanks to a brace from Golden Boot leader Nick Soolsma and one from Pavi Dhillon.

That win sees Rovers Tigers finish Week 16 in fifth place in the standings, three points off top spot but with two games in hand.

The last match of the weekend took place at Charles Best Secondary in Coquitlam, with Metro Ford Wolves and NVFC Norvan playing out a 1-1 draw. Carlo Basso got his ninth of the season for the home side, with former Whitecaps Residency player Jake Ruby getting the goal for the visitors.

And after all that action in Week 16, the current VMSL Premier Division standings look like this: 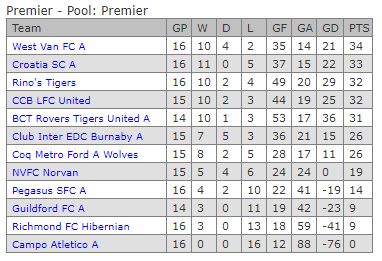 It continues to be tight at the top and that’s not likely to change too much this weekend with only two of the top five sides facing each other, but what a match up that promises to be at Trillium on Saturday afternoon as Rino’s Tigers play host to CCB LFC United. The team are both sitting two points off leaders West Van, with 93 goals between them from their 31 matches. Get along to this one, it should be a cracker. Kick off is 4.05pm.

And something else that’s shaping up to be a cracker is the Division 1 promotion race.

With two promotion places up for grabs and six matches of the season remaining, there’s still all to play for after a dramatic last second 1-0 win for Burnaby Metro Athletic over leaders ICSF Columbus at Burnaby Lake on Friday night.

That win keeps the Burnaby side in the mix at the top in third place, four points behind joint leaders Columbus and Burnaby Selects White Eagles. 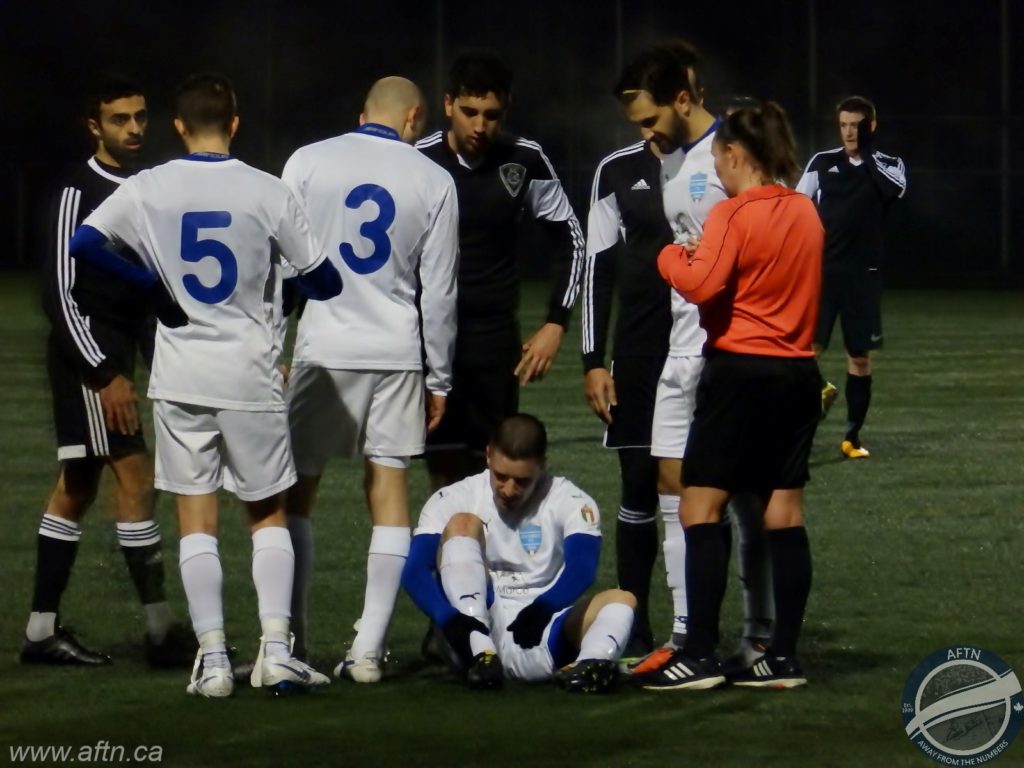 You can find all of this weekend’s fixtures, along with results and standings across all seven VMSL divisions on VMSLsoccer.com and don’t forget to head over to the Take The Piss forums for all your local football banter.

It’s looking like a nice, dry weekend, so get out and support some local soccer.