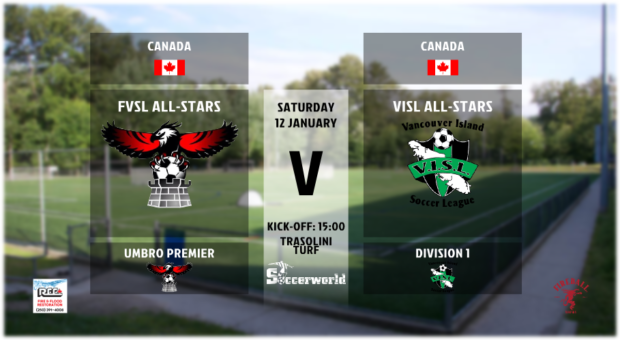 We are officially into the New Year and we’re definitely feeling the excitement in anticipation of what 2019 will have in store for football on the island.

Part of that excitement is the All-Star Summit competition between the VISL and FVSL (Fraser Valley Soccer League) in Port Moody on Saturday afternoon.

Locally, we have had All-Star competitions regularly, and for several divisions, for 15 years. The competition between these two Leagues playing under the BC Soccer umbrella is heading into its 5th year and is a good opportunity to acknowledge individual players, coaches, and referees for the personal progress over the course of the year.

Keeping in mind the standard challenges that amateur players face – families, jobs, time commitments – we are happy to have all make the sacrifice and time for these matches.

There are no points to play for or big money prizes, just a tiny bit of pride (ok, maybe a lot of pride), fierce competition, bragging rights, and camaraderie between the local Leagues when it is all said and done.

The FVSL All-Stars fought back from a 2-0 deficit on the island last year to level and take the match against the VISL All-Stars to penalties, before going on to win the shootout and claim the bragging rights. Can the island boys head to the Valley and get their revenge?

Here are the line-ups for both Men’s squads as they prepare for this year’s clash: