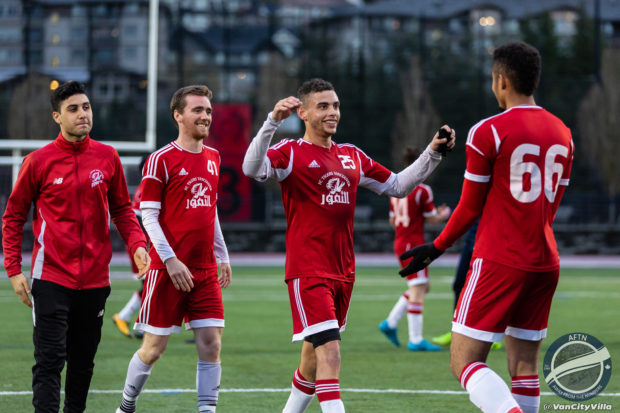 With BCT Rovers Tigers United allowed the weekend to recover after their heroics at the Nationals, there were five VMSL Premier matches played last weekend producing 19 goals and seeing the top three teams consolidate their place at the top of the standings.

The action got underway at Burnaby Lake on Friday night with Club Inter EDC Burnaby playing out a 1-1 draw with NVFC Norvan, to keep both teams’ strong starts to the season going. Bryan Fong gave Inter the lead four minutes before half time, before Colin McDonald brought the visitors back on level terms eight minutes into the second half.

The other Friday night game was out in Richmond where a first half stoppage time goal from Daniel Davidson gave Croatia SC a narrow 1-0 win over Richmond FC Hibernian, maintaining their place as joint Premier leaders after the first six weeks of the season.

Both of the teams still searching for their first points of the season were in action on Saturday afternoon, and by the end of it, they were both still looking to get off the mark.

Campo Atletico’s dismal defensive start to the new campaign continued at home to Pegasus SFC where they went down to a 5-2 defeat, taking their goals against tally to 27 after their first six matches. On the positive side, Campo grabbed two goals for the second week running and took the lead for the second straight match, thanks to Joshua Skurrey-Cradock’s opener a minute before half time.

Pegasus turned it up after the restart though and got back on level terms just before the hour mark through Eric Ray, only for Thomas Kargbo to put Campo back ahead again immediately. But then the Horsemen took over, with Rajan Dhadwal starting four unanswered goals in the 63rd minute, before a brace from Javid Khan in the 68th and 80th minutes put Pegasus in control. Daniel Sagno made it a five star performance for the Surrey side with nine minutes remaining, to wrap up the scoring.

West Van FC kept up their pressure on the leaders with a 4-1 win at Guildford at Newton on Saturday. James Mason got the goals underway on the half hour mark before Paul Kelly doubled the visitor’s lead in the 55th minute. Guildford pulled one back a minute before the hour mark through Pavan Singh. Michael Winter restored West Van’s two goal lead in the 63rd minute before Shane Howard rounded off the scoring three minutes before full time.

That win keeps West Van within two points of leaders Croatia SC and Rino’s Tigers, with the latter running out big winners in the weekend’s ‘match of the week’ on Sunday against CCB LFC United.

The much anticipated meeting between two teams heavily fancied to win the title this season proved to be something of a very one-sided affair with Rino’s running out comfortable 4-0 winners.

Alberto Cirac-Perez set Rino’s on their way after just three minutes, before leading scorer Declan Rodriguez doubled their lead on the half hour mark, taking his tally to the season to nine, sharing the lead for the Golden Boot with CCB’s Milad Mehrabi.

Cirac-Perez grabbed his second of the game, and Rino’s third, in the 51st minute, before Tetsuya Yoshinaga completed the rout a minute before full time.

Very much a statement performance from Rino’s, who lead the division now with 23 goals, and you can probably expect more Tigers goals this weekend as they host bottom club Campo at Trillium on Saturday afternoon.

So all those results leave the Premier Division standings as: 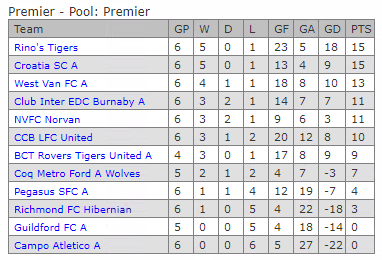 You can find all the latest results, standings, and fixtures on VMSLsoccer.com.