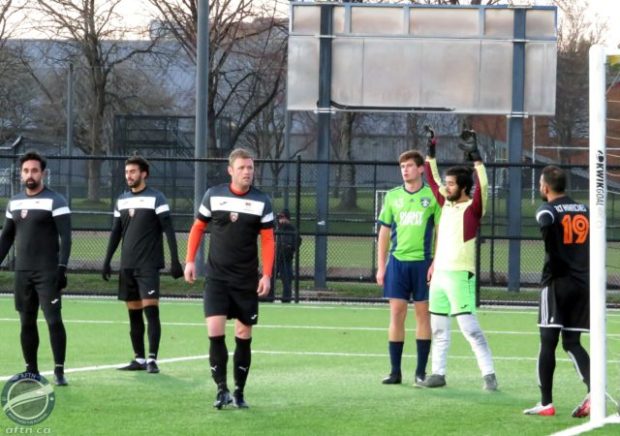 The only thing to beat Vancouver Metro Soccer League (VMSL) Premier Division leaders BB5 United CCB so far this season has been the weather. The Surrey side have now seen three of their 15 scheduled games this season lost to the elements. Two were abandoned, with their game at Inter EDC fogged out 36 minutes in and their game against Coastal last weekend suspended with 16 minutes remaining as the floodlights failed on a wild and windy night. Now this past weekend, their final match of 2021 was deemed a no go as snow covered the pitch at Newton Athletic Park stadium.

GAME POSTPONED DUE TO SNOW! pic.twitter.com/lhruWGxZpG

Despite the weather gods not playing ball, BB5 finish the year top of the VMSL Premier Division standings, with a two point gap over Coquitlam Metro Ford Wolves and Rino’s VSC Coastal, and with three games in hand with the former and two with the latter. It’s been a tremendous campaign for the team so far and they’ll be looking to keep that form going into 2022 aa they look to tie up a league and Imperial Cup double and then move onto the Provincial Cup.

With West Van’s home game with Burnaby Selects White Eagles being rescheduled to Wednesday January 26th, that meant the first actual action on the pitch this past weekend came at South Surrey Athletic Park on Saturday afternoon, with the aforementioned Rino’s VSC Coastal keeping in touch with the leaders, and the battle for second, with a 2-0 win over Croatia SC. Jake Starheim put Coastal ahead five minutes before half time, with Isaac Kyei doubling the home side’s advantage in the 65th minute. It was a two goal lead that Coastal held on to and Croatia’s bad day at the office was added to when Kyle Kemp was sent off three minutes into second half stoppage time for a second bookable offence.

That win moved Coastal onto 28 points, two behind BB5 but having played two games more. They share second place with Coquitlam Metro Ford Wolves who went nap at Fen Burdett Stadium in a 5-1 trouncing of ten man NVFC Norvan on Saturday afternoon.

There wasn’t much between the two teams in the first half, with Dawit Genet’s 7th minute goal the only thing separating the two sides, but things quickly changed five minutes into the second half when defender Adam Swanson was sent off for the denying of a goal scoring opportunity in the box. Adam Jones stepped up to fire home from the spot to give Metro Ford a 2-0 lead and Norvan head coach Darren Rath then followed Swanson in for an early shower when he was sent off by the referee.

Despite being down to ten men, the north shore side pulled one back through Gordon Grice with 15 minutes remaining, but the pack of Wolves then took over, hitting three goals in the final eight minutes through Carlo Basso, a second for Genet, and then a last minute fifth came from Christian Comuzzi.

UBC’s South Turf played host to VUFC Hibernian as they took on BCT Rovers Hurricanes on Sunday afternoon. It really is a horrible pitch from a spectating point of view (and filming as you’ll see below!), with one fan in attendance commenting that she felt she was watching the game though a prison cell with the high fencing all around. You’d think Ken Woods Field would be the far better alternative.

It was an entertaining encounter, with both teams having chances, but it felt that the Hurricanes had the better quality throughout and that shone through in the end with a 2-1 victory.

Cam Hundal shot Hurricanes ahead in the 22nd minute, but their lead was only to last seven minutes before the ball broke to Jack Napier-Ganley, who fired home with power and a nice finish from just inside the box to tie things up again. That was how it stayed until half time, and the winning goal came six minutes after the restart when Nick Soolsma added an 18th to his Golden Boot leading tally, with an easy tap in.

We’re not saying that the Hurricanes are a one man team, but the next highest scorer on the team has 15 less goals than Soolsma!

You can see all the goals and some other brief highlights from the match below and on the AFTN YouTube channel. It’s a crap camera angle unfortunately, we were behind one of the goals, but hey you’re up close and personal! It’s like you were there, but wasn’t great footage so we haven’t used a lot of it:

The final VMSL Premier match of the year took place at Burnaby Lake on Sunday evening and by all accounts, was a cracker to round off 2021, with Inter EDC seeing off MAFC Elite 3-2.

Whitecaps Residency alumni Alan Camacho put Inter ahead just two minutes in, but Mohammad Karimipoursaryazdi levelled for MAFC five minutes before half time. Khalifa Fanne then put MAFC ahead with 15 minutes remaining, but their quest for a much needed three points in their relegation battle was soon to be derailed.

Six minutes later Karimipoursaryazdi was sent off with a straight red for violent conduct after a tackle from Inter’s Edris Najm led to an altercation. Najm was also shown a red card, but it was ten man Inter who adapted better and they tied things up through a Zachari Ouariti-Zerouali goal three minutes from time.

But the drama wasn’t over yet and Ouariti-Zerouali broke MAFC hearts and secured all three points for Inter with a goal three minutes into stoppage time.

So after all of that action, here’s how the VMSL Premier standings look to end the year: 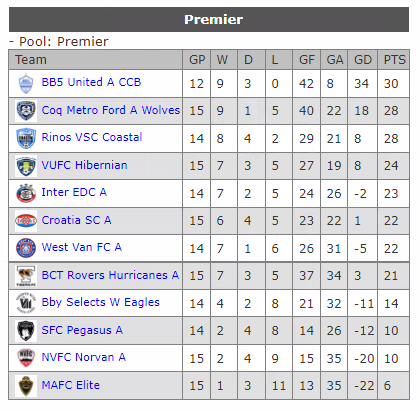 With two teams set to automatically go down and a third facing a playoff with one of the Division 1 runners-up, it’s still looking like a big battle ahead for the bottom three right now to avoid the drop.

Division 1 has been split into two seven-team pools for the season, with both pool winners going up to the Premier, depending on any parent clubs already being there.

Runaway Pool A leaders Columbus FC look set to make a return to the Premier Division after a few seasons away, but they went down to their first defeat of the season at the Jericho Turf on Friday evening with Rino’s Fury coming away with the big 2-1 victory.

Columbus had the chance to go ahead from the spot 10 minutes in, but Ryan Arthur dragged his penalty about eight yards wide of the Rino’s goal. Not to be denied, Columbus did go ahead seven minutes later through Patrick Izett and that was a lead they were to hold till the 65th minute when Mark Norton brought Rino’s level.

The winner came in the 80th minute when Luca Bozzetto put Rino’s ahead for the first time in the match, and although they saw Tenzin Ozaki sent off for violent conduct in the final minute, the Fury held on for all three points.

Despite the loss, Columbus have an eight point lead over second placed Port Moody SC in Pool A, with Westside FC leading the way in Pool B with a two point lead over Rino’s Fury but having played two games less.

It’s been a highly enjoyable season so far, and hopefully one that we get to see play out to its proper conclusion. Games are due to get back under on Friday January 7th, but we’ll see what Covid regulations have in store for us. In the meantime, you can find all of the results, standings, and fixtures across all the divisions at VMSLsoccer.com.