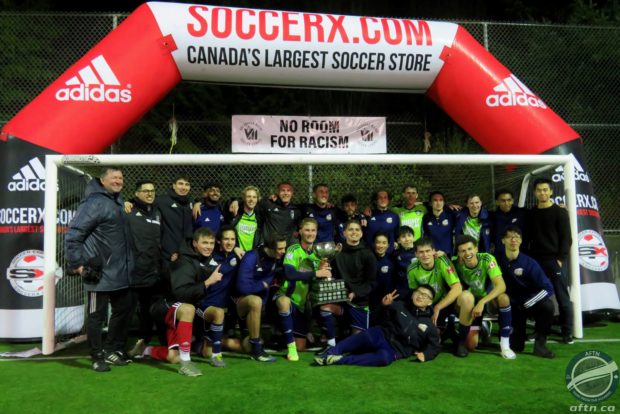 Pride of place was the Imperial Cup, a trophy played for locally since 1913, and the final between VUFC Hibernian and defending champions West Van FC was a closely fought affair, with the Hibs lads coming away with a 2-1 victory to lift their first trophy.

All the goals came in the first half in this one. VUFC looked the more lively in the early going and Sebastian Dzikowski fired them into a 19th minute lead with a lovely first time finish from a swivelling volley.

Nine minutes later and another fantastic goal gave Hibernian a 2-0 lead as Chris Fisher hit a free kick over the wall and past the flying West Van keeper.

The Amblesiders got themselves back into on the half hour mark when Dylan Bams showed some nice footwork in the box and saw his goalbound effort turned into his own net by a VUFC defender.

But that was to be it for the scoring, and with not a lot of real goal threat from either side, Hibernian comfortably saw out the remainder of the game and lifted their first ever Imperial Cup.

You can watch the goals from the game on our YouTube channel HERE or in the video below:

The Division 1 Cup final saw a battle between Pool A champs Columbus FC and 5th placed Pool B side Coquitlam Metro Ford Lupi, but the league standings went out the window in this one in a closely contested match that was still up for the taking right to the last minute.

John McEown put Columbus ahead in the 37th minute and that was how it stayed until the last minute when Arrio Thomas sealed a league and cup double for the Italians with a fantastic second goal in the 90th minute.

It’s been a fantastic season for Columbus and we look forward to seeing what they do upon their return to the VMSL Premier Division next campaign. 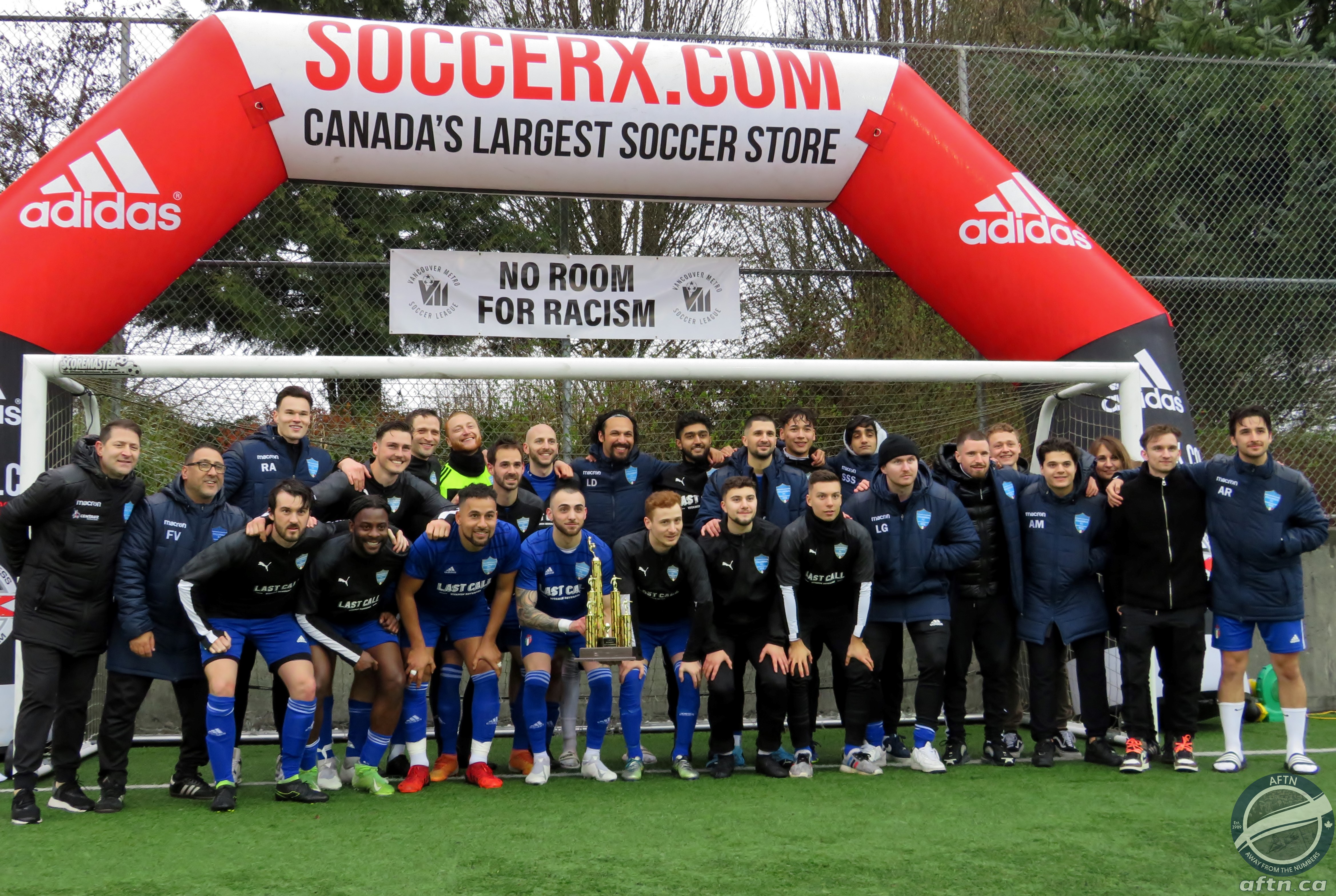 The Division 2 Cup final was another close contest that went down to the wire, with a lot of drama along the way, including two penalties and a sending off.

This was a rare battle between Division 2 and Division 3 teams, and in the end it was Div 2A runners-up Vancouver Harps who got the better of Guildford FC , who were coming off an unbeaten season on their way to winning the Division 3B title, by a 2-1 scoreline to win the club’s first trophy in their 20 year history in front of a great and noisy crowd. 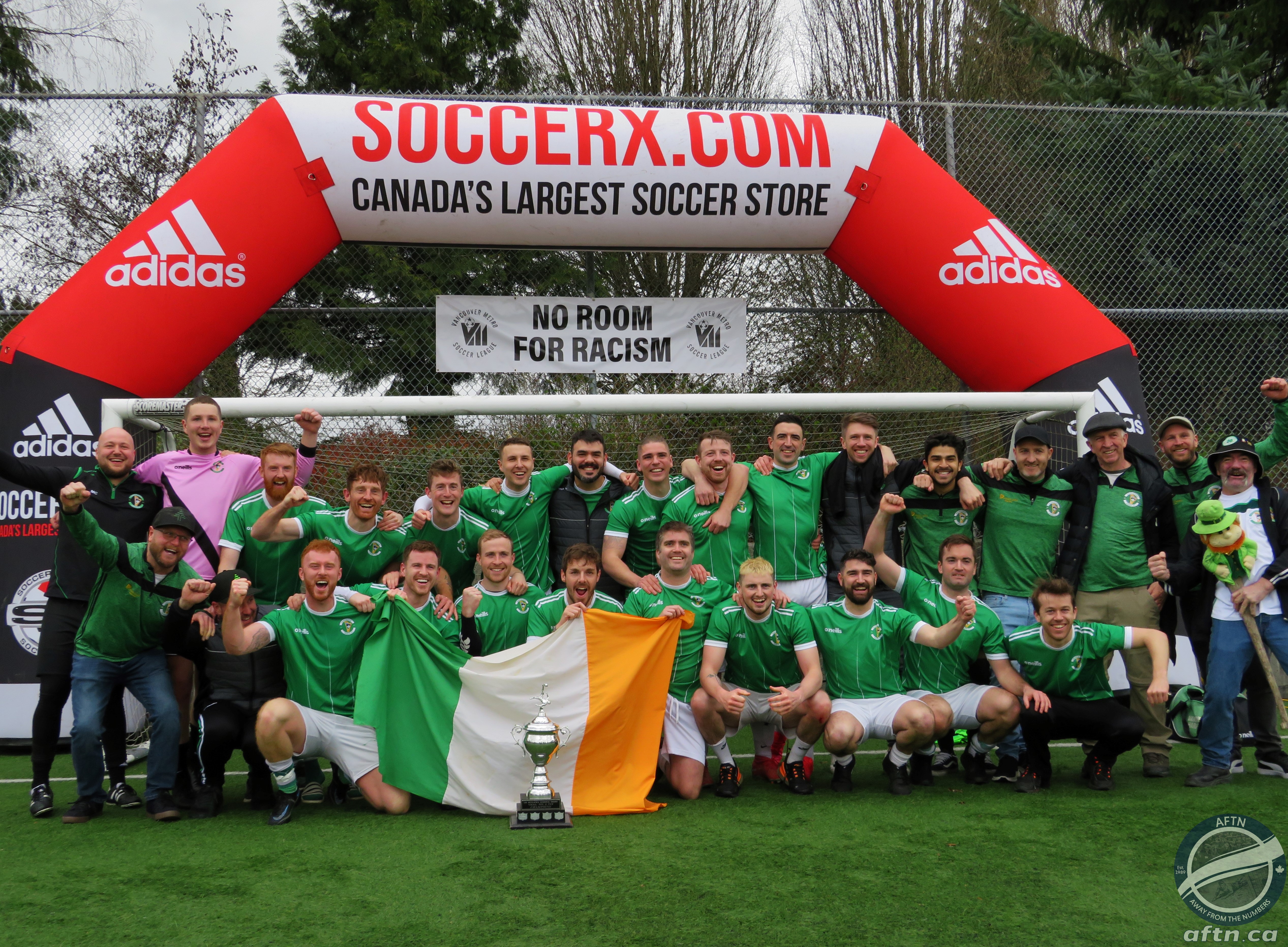 It was Guildford who had the better of the early exchanges and they could have had a penalty just 12 seconds in, but the referee waved away the shouts after a heavy challenge in the Harps box.

After surviving the early Guildford pressure and chances, Harps started to come more into the match and went ahead in the 26th minute through a nice flicked header from Andrew O’Connor.

Both teams had their chances to add to the scoring, but it was Guildford who finally got back on level terms in the 69th minute when Dipinder Gill fired home from the spot after being brought down by a Kenneth Turner lunge.

With the game now very much in the balance, and both sides going for it, Harps got what proved to be the next crucial goal, and it was from another penalty, with O’Connor coolly grabbing his second of the game to give the Irish lads a 2-1 lead and ended up being the match winner.

Turner got a second yellow for Harps with two minutes remaining after kicking the ball away, but Guildford didn’t have enough time for their man advantage to benefit.

You can find our photos from the match on our Flickr account HERE and full, extended video highlights of the game HERE and the trophy celebrations in the video below:

Both teams now move into this year’s BC Provincial B Cup, with Harps getting a first round bye and Guildford FC taking on FVSL side Langley Utd Dynamo today, in what should be an enjoyable encounter in the Preliminary Round.

In the Division 3 Cup, FC Serbia United Narps made it a league and cup double, as the Division 3C champs got the better of Division 3A champs 3-2 in another entertaining match.

Don Ballescas put Mainland ahead seven minutes in but Justin Duck tied things up for Narps in the 18th minute. That was how things stayed until the 73rd minute when Benjamin Jaeger put Narps ahead for the first time in the game and Elkordi Ali gave them a two goal lead with nine minutes remaining.

Fraser Kirkland made it an interesting ending when he reduced the deficit to one in the 89th minute, but Mainland couldn’t find the equaliser and Narps lifted the trophy.

Port Moody Rangers won the Masters A Cup with a narrow 1-0 victory over SFC Pegasus TU thanks to a 7th minute goal from Omari Aldridge. Port Moody then saw Wes Halliday send off for violent conduct in the 18th minute but Pegasus couldn’t break them down in the remaining 72 minutes and Port Moody held on to lift the trophy.

Gastown Astro needed extra time in the Masters B Cup to bring home the trophy in a 4-3 barnburner win over Strathcona Primo.

Eoin Brady gave Strathcona an early third minute lead, before Kevin Boyle tied it up for Gastown two minutes later. A Geoffrey Ryan goal three minutes into the second half and a Daragh Brennan strike four minutes before the hour mark gave Strathcona 3-1 lead and they must have felt comfortable seeing the game out, but Gastown roared back with two goals in two minutes Bryan Hickey and Gido Robbenhaar in the 70th and 72nd minutes and the game was heading to extra time.

Gastown’s comeback was then completed nine minutes into extra time when Stephen Dolhagaray grabbed what proved to be the winner and seal the victory and the cup for the Astro.

Fusion FC lifted the U21 Cup with a 3-1 victory over Langley United. Nathan Yee gave Fusion the lead four minutes before half time and Ravail Nijjar doubled their advantage in the 66th minute. Ben Baker pulled one back for Langley in the 79th minute to set up an interesting ending, but James Jordan struck in the 89th minute to secure the win and the cup for Fusion.

A fantastic day of cup final football, but the action wasn’t finished there as the last game of the day produced more late drama as 10th placed Premier Division side Burnaby Selects White Eagles and Division 1A runners-up Port Moody SC battled it out in a promotion/relegation playoff.

It was a tense and nervy game, with both teams knowing what was on the line, and with the match tied at 0-0 in extra time and seemingly heading to penalties, Jakob Mitchell buried a low one from 20 yards out in the 108th minute to give Port Moody the 1-0 victory and promotion to the VMSL Premier at the first time of asking after making the switch over from the FVSL this season.

🏆Congratulations to @PortMoodySoccer AC Spartans on winning promotion to the @VMSLsoccer Premier Division next season.

Quite the way to end a very enjoyable afternoon of local football and end the VMSL season with a bang.

But the action isn’t over yet for many of the teams with the BC Provincial Cup getting underway this month. There’s eight preliminary round matches in the B Cup this weekend, before all the cups get into full flow after the Easter break. We’ll have full coverage here on AFTN over the coming weeks, so stay tuned for that.