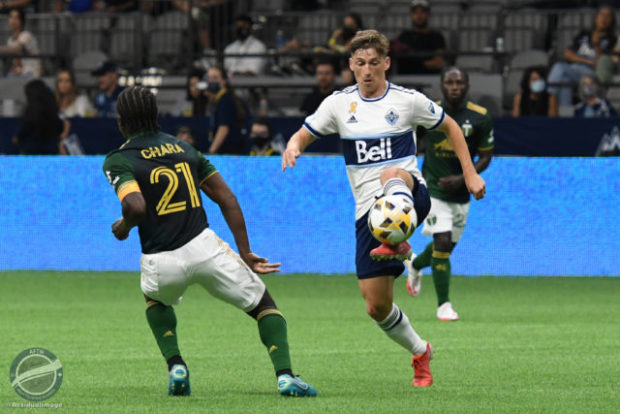 After a terrible start to the season the Whitecaps have slowly started to get their feet under them, and are coming off a match against SKC where – checks notes – they actually outplayed their opponents over the course of the 90 minutes. Ryan Gauld looked closer to his regular self, the defence held strong, and Ryan Raposo finally got his first MLS goal!

I have to admit that I was quite skeptical of Raposo as the left wingback when I saw the starting lineup announcement, combined with the fact that it was Javain Brown out there as the other wingback instead of Cristián Gutiérrez.

I was then made to look a little silly as Raposo got his goal as mentioned and Brown had his best performance of the season so far. It was interesting that it was Marcus Godinho who came in as the late sub rather than Gutiérrez but that’s perhaps a topic for another day. Given that the changes made last weekend earned the ‘Caps their first win of the season you’d expect there will be a similar XI on Saturday for the first Cascadian clash of the season.

The biggest question mark is the health of Tristan Blackmon, as he received a nasty knock to his head in a bout of friendly fire from Ranko Veselinović at the end of the SKC match. He was in concussion protocol earlier in the week but cleared it on Friday, allowing him to participate in training.

If fit to play he might be the first name on the teamsheet of the back three, but if not Florian Jungwirth will likely draw in to replace him with Érik Godoy still on the shelf. Veselinović has played all but six minutes this season with his spot in the middle of the back three secure, while Jake Nerwinski bounced back from some early struggles with a solid performance against SKC.

In the midfield, it’s annoying that Caio Alexandre hasn’t been able to feature, and he’s still yet to make his first appearance since Vanni Sartini took over. He’s the player on the roster with the best chance of being the dynamic #8 that the ‘Caps are crying out for, but he’s out once again this weekend.

With Leonard Owusu and Michael Baldisimo both listed as questionable, it’s likely that we’ll see the return of the Russell Teibert-Sebastian Berhalter duo against the Timbers. It’s not one that wows you, but they were solid enough against SKC, clearly game-planning to try and hit the channels with quick passes that worked on a few occasions.

Neither of those two are dangerous creators, however, which puts a lot of pressure on the front three to do just that. There were signs of life against SKC – Déiber Caicedo consistently impacted the match and Gauld as mentioned was livelier – but with just three total goals on the season so far there is still plenty of work to do.

The biggest question is whether it will be Brian White or Lucas Cavallini who starts. White was fine last weekend, not able to create that clear cut chance but also not dragging the team down or anything. Cavallini was very engaged when he came off the bench, driving action in a way we’re not used to seeing from him but still not really leading to many real chances.

My personal prediction is that it will be White up top once again as the ‘Caps look to re-establish the Gauld-White connection from last season, but that Cavallini will come in relatively early in the second half, potentially to play alongside White if the American forward is having a stronger performance. 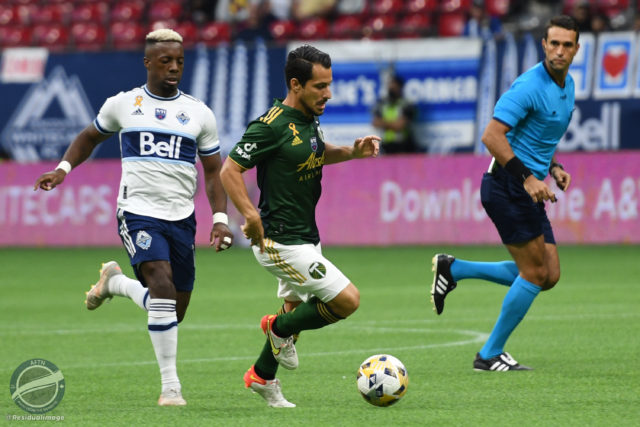 Looking at the visitors, the Timbers also have just one win so far this season, sitting two points ahead of the ‘Caps due to a higher number of draws. They’re coming off a disappointing 3-1 home loss to the Galaxy that saw a player from both sides sent off. Portland has actually received a red card three times already this season, so that’ll be something they look to clean up.

The Timbers could be without two regular defenders for this one as both Claudio Bravo and Zac McGraw are listed as questionable, the former due to a hip issue and the latter due to illness. Forward Felipe Mora is also out as he has yet to make his season debut due to a knee injury.

The Whitecaps don’t have a good recent record against Portland, losing four of their last five meetings. However, they have been very strong at home since the back half of last year with an 8-1-2 record in their last 11 matches at BC Place. Stringing together back-to-back wins would do a lot towards moving past the gloom that surrounded the first few matches of the year, let’s hope they can get it done!