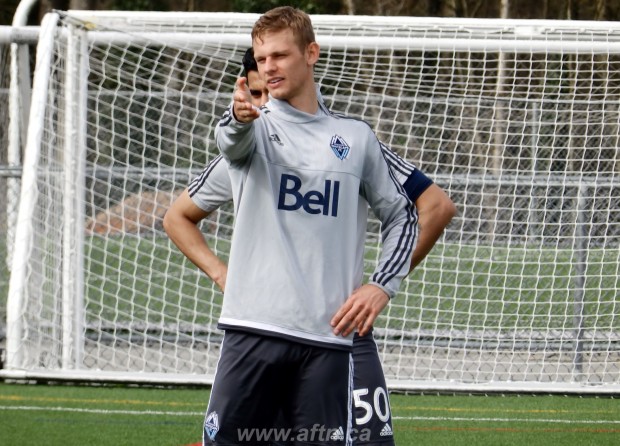 With WFC2’s first USL match a mere two days away, Alan Koch’s young squad are looking eager, sharp and hungry for success. With a number of the players having signed their first pro contracts, captain Tyler Rosenlund has been standing out as the old man of the squad at 28-years-old.

Whereas the Whitecaps might look at their USL team as a development one, as we’ve pointed out before, they will be playing against other teams made up of veterans and experienced pros. The ‘Caps have looked to address the inexperience factor and today they have done just that with the announced signings of striker Billy Schuler and midfielder Ian Christianson (pictured).

Both players have been in the pro game for a couple of years now and come to WFC2 having played MLS minutes last season. That experience, coupled with their hunger and desire to make it back to the top flight, should make them excellent additions to the Whitecaps roster for the USL season ahead.

Schuler is a 5″11′ striker who spent last season in MLS with San Jose Earthquakes, making six league appearances for the Quakes and one in CONCACAF Champions League action.

His MLS debut actually came against Vancouver, coming on in the ‘Caps 3-2 win at BC Place last May and playing the last 11 minutes of the match. He made his one and only start for San Jose in the 1-0 loss at Seattle two weeks later and played 137 MLS minutes altogether.

Capped by the US at U17 and U20 level, Schuler had a successful college career with the University of North Carolina Tar Heels, going on to score 29 goals and contribute 15 assists in 79 appearances and lifting the 2011 College Cup.

That Championship win prompted Schuler to come out college after his Junior year (which was actually his fourth year as he had one redshirt year through injury) and head over to Europe, joining Swedish club Hammarby IF.

After two seasons in Sweden, which included a loan spell with Nacka FF, Schuler decided to head back to the States and joined San Jose last season before being freed in Dominic Kinnear’s reshuffle of the team.

The Quakes’ loss is WFC2’s gain and coach Alan Koch is delighted that the soon to be 25-year-old striker has landed in Vancouver.

“He’s a great attacking player,” Koch told AFTN at WFC2 training on Friday morning. “He can play as a 9, as a 10. We even looked at him in the last session as an outside player too. Great kid, great player. Not quite match fit yet at this stage. It’s going to take another week or two to get where he needs to be, but as soon as he’s ready, he’s going to compete for a starting spot for us.

Schuler is joined as the newbie in the squad by former New York Red Bulls midfielder Ian Christianson.

Christianson has spent the last two seasons in New York, after being selected 22nd overall by the Red Bulls in the 2013 MLS SuperDraft. He made three sub appearances, lasting nine minutes, for New York last season before being released at the end of the year.

Like Schuler, Christianson also has some CONCACAF Champions League experience under his belt, starting two of the Red Bull’s games in their 2014-15 campaign.

Christianson came to MLS from Georgetown University and he captained the Hoyas in both his Junior and Senior seasons, on his way to scoring 14 goals and adding 10 assists in his 78 appearances. His college career came to a heartbreaking end however when Georgetown lost the 2012 College Cup 1-0 to Indiana.

The midfielder is certainly familiar with USL. He spent three of his summers playing PDL, first with Chicago Fire Premier and then with Reading United, and he had a short loan spell with Orlando City last season, making three appearances for the Lions in USL PRO.

Christianson can play both midfield and defensive roles and that versatility will definitely be one of his attributes that appealed to the ‘Caps.

“He’s a silky smooth, left-footed midfielder,” Koch told us about Christianson. “He can also play potentially as a left full-back or as a central defender. Very, very comfortable on the ball. I think he’s going to suit the way that we’re going to ask our team to play.

“Great guy too, just like Billy. They’re both excited to be here. They can see already that we’ve got a lot of young talented players around them. They’re both a little bit older than our teenagers or 20-year-olds and 21-year-olds, so we’re literally speaking that they’re going to give us a little bit of experience, which we’ll definitely need in some intense games.”

It’s unlikely that either player will feature in the starting line-up for WFC2’s inaugural USL game against Seattle on Sunday, but they may feature on the bench and expect to see both of them pushing for starting minutes in the near future.

Their additions and experience certainly round off the USL squad nicely. Now all that remains is to finally get the season off and running.