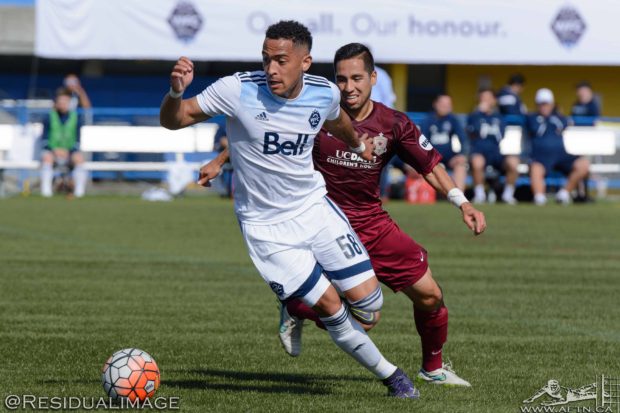 Will Seymore has flown a little under the radar for WFC2 in his 15 months in Vancouver.

That’s certainly one of the pitfalls when you’re a defensive midfielder. It’s a position that’s often key to a team’s success, but not the most glamorous one to stand out in unless you make mistakes (as Jun Marques Davidson would surely attest to).

But Seymore has been a vital cog to the success of Whitecaps 2 this season, and if it feels that he’s somewhat undervalued in some quarters, that’s certainly not the case for Alan Koch, who is very aware of what the 24-year-old brings to his young squad.

“Will’s a team player,” Koch noted. “When you put him in our line-up, he makes the players around him better. If I was still playing, I’d want to play next to him because he makes me look better.

“He does a lot of dirty work, for himself and also for the other guys to allow them to be successful. We definitely appreciate him. We know what he’s good at and hopefully we’ll continue to get a lot of good stuff out of him.”

Seymore’s made 23 appearances for WFC2 this season. If you want to get an idea of how valuable his contributions have been, the team have only lost four games when he’s been a starter, and only won one of their last five to end the season with Seymore out injured.

With the USL playoffs getting underway this evening, the good news for Vancouver is that Seymore is back in training, healthy, and raring to go after missing the last month of action.

It’s just what WFC2 needed to hear, especially coming on the back of Ben McKendry’s season ending injury suffered against Central FC on Wednesday night, and Seymore is set to feature in the game against Colorado Springs Switchbacks tonight.

“I’m feeling really good,” Seymore told AFTN when we spoke with him at WFC2 training this week. “I’m just waiting for the 18 selection, but I was back to full training [on Tuesday] and I was feeling really strong.

“Compared to what it could have been, I’m pretty blessed and pretty lucky to be back at this point and being able to run around and kick and stuff. I’m feeling as close to 100% as I have in the past three weeks or so.”

When Seymore went off injured in stoppage time in the 0-0 draw at Sacramento Republic in August you feared the worst.

As his right leg got caught in the turf and bent horribly, it looked a bad injury. One which had all the makings of a season ending one. But not everything is thankfully as it first appears and the 24-year-old has ended up only missing five matches when it could have been a lot, lot worse.

“I had sprained knee ligaments and then a high ankle sprain,” Seymore revealed. “It could have been [bad]. I thought it was a wrap when I went down, but luckily my ankle and my knee both took the force, so it wasn’t just all on my knee because then I think it would have been a different story.”

Thankfully it wasn’t, and Seymore now gets set for his first taste of USL playoff action. Coincidentally, his return will be in his hometown. A good omen if ever I’ve heard one.

But although Seymore was born in Colorado Springs, there will be no mixed emotions for the midfielder when he makes his return after leaving the city to head to Soham in England at an early age.

“My dad was in the air force and he was stationed on the air force academy there,” Seymore revealed. “I was just born there and I was there for a couple of years when I was a kid. The only thing I remember is the picture books my parents showed me. It feels weird going back, but no real special affinity for it, other than I was born there.” 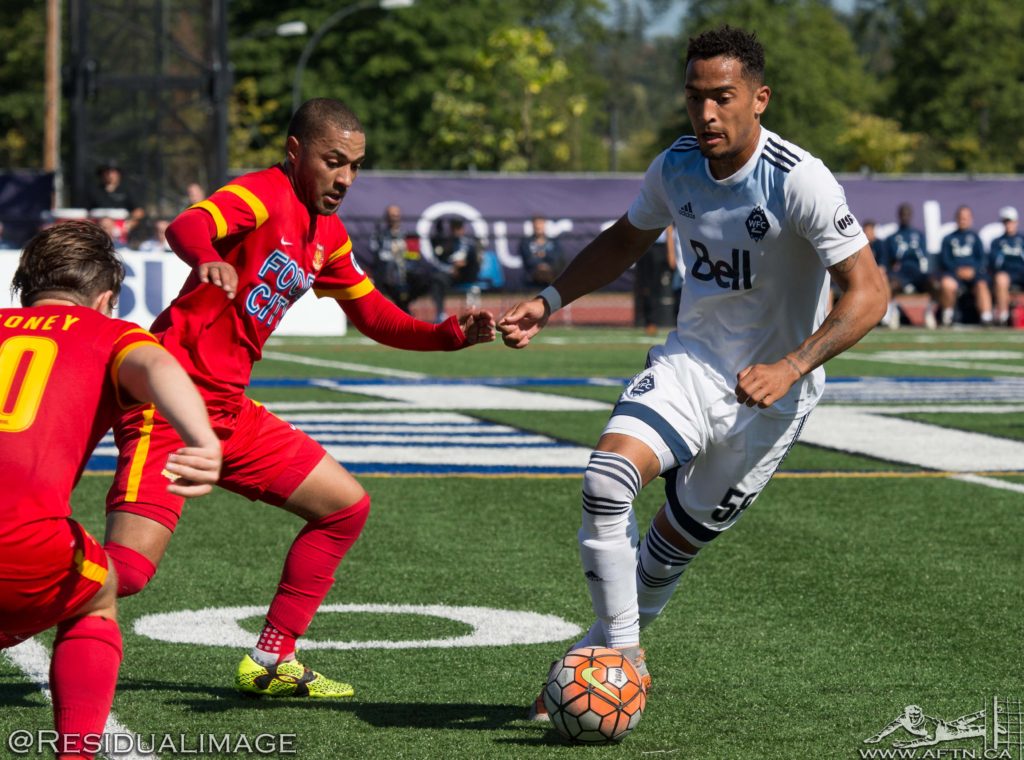 Seymore is certainly well travelled and his footballing path has gone through a few twists and turns before the road eventually led to Vancouver.

A standout defender at Oregon State, Seymore was a four year starter for the Beavers, making 73 overall appearances and captaining the team. Spending his summers playing PDL with Portland Timbers U23s, Seymore impressed, earning a spot at the MLS combine in January last year, before being selected in the third round by FC Dallas at the 2015 MLS SuperDraft.

But as with so many other lower draft picks before him, there was to be no MLS contract at the end of it all, with the Texans deciding they had no plans for the player and he was released before the start of the season.

“I went in the third round and when you don’t go in the top ten, you’re just going in and you’re trying to make a mark,” Seymore readily admits. “I went and I did as best as I could, but on a professional level, I guess they just didn’t have any plans for me.

“It just didn’t work out there, so I left, then went and tried with some other USL teams and I didn’t make those. I just kinda went home and thought to myself that I just needed to mentally and physically take a break and be at home with my family and stuff.”

And that’s where Alan Koch and the Vancouver Whitecaps come in.

“I came back and did some classes at Oregon State,” Seymore revealed. “That’s when I got in contact with Alan. We had mutual friend. I came up here and impressed and played well and they liked me, and they gave me a chance.”

Koch brought Seymore, who was playing PDL soccer for Lane United, to Vancouver last summer. He’s been a regular in the line-up since and the midfielder is enjoying everything about life in the city, both on and off the pitch.

“I’ve loved it,” Seymore told us. “Outside of soccer, I think Vancouver is one of the best cities I’ve been to in my life. It has everything here. On the field, as a player, personally I’ve gotten miles better than what I was. You learn things when you’re in the pro game, on and off the field.

“I’ve learned from great coaches and players. Pa, Alan, Stevie, Raegs. My player growth has only gone up. That’s what I’m looking to do, to go up, but as a team I think we’ve done unbelievably well. Coming from where we were last year to where we are now, everything’s been pretty good.”

It’s certainly been an amazing turnaround for the team this year, and although they struggled to get over the line towards the end of the campaign, there’s a lot of success to be taken from it. And it’s not over yet.

The team look to build on a strong 2-1 victory over OKC Energy to round off their regular season and are heading into the playoffs in confident mood.

“First half [of the season], Alan spoke to us and we played like we were at the bottom and needed to prove ourselves,” Seymore feels. “We went out and played against every team in the first half of the season, making a name for ourselves.

“Second half, we just fell of a little bit. I don’t know really what it was. There’s no excuses or anything like that. It’s just one of those things where we got stagnant or guys were in and out of the line up. The line-up was changing. It’s hard to build a solid team chemistry when you have the line-up changing all the time.

“I think we bounced back really well. The guys did really well in that game against OKC leading into the playoffs, so we have pretty good momentum heading into Friday.”

But as wonderful, and as exciting, as playoff success would be, ultimately it’s all about development and progression to the first team at WFC2. That’s the reason Seymore is at the club, with the lure of coming to a side who actively promotes the progress of their younger players.

The proof of the pudding is already there, with Brett Levis and Alphonso Davies moving up from the USL side this season and signing first team contracts, while Kyle Greig, Spencer Richey, and Sem De Wit have all been called up for Champions League squads.

Seeing and experiencing those progressions first hand have certainly lit a fire under Seymore, with the reward his hard work could produce somewhere down the line within reach.

“As a player it gives you a lot of motivation,” admits Seymore. “It gives you something to look at. Like if he can do it, then all I have to do is play well and hopefully your merit on the field gets you that opportunity.

“It’s great to be at a club where they do give young guys a chance. And whether I get that chance or not, at the end of the day, it’s great for any player here, even Kadin [Chung], Tommy [Gardner] and young players like that.

“That’s the goal. To do what Brett’s doing and to get that chance and go up to the next level, but being at a club like this, it’s great to get those chances when you’re a young player.” 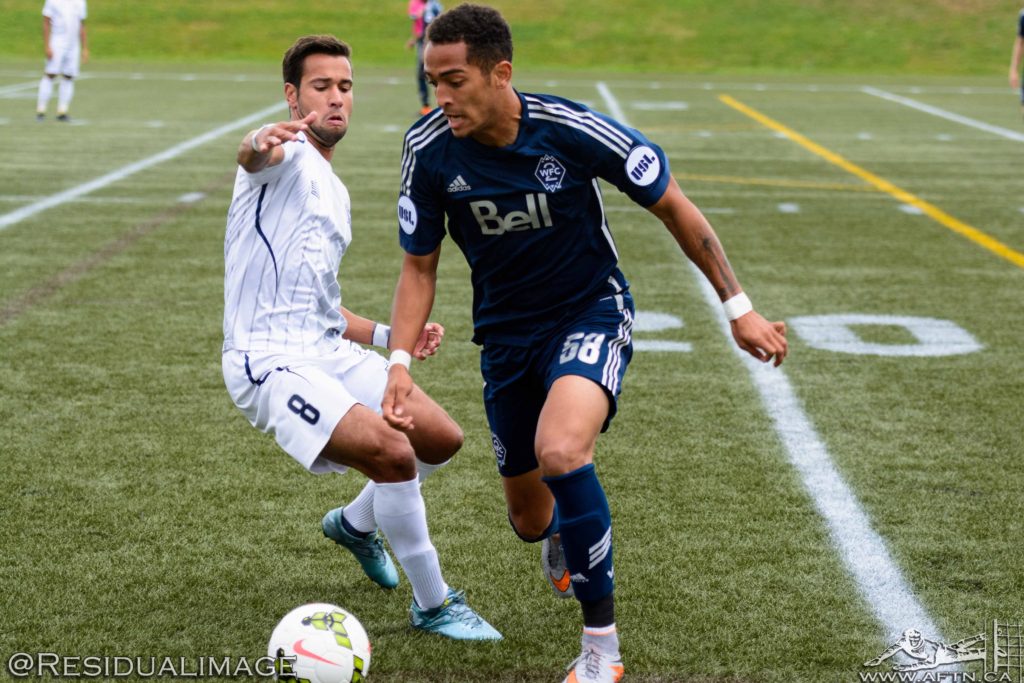