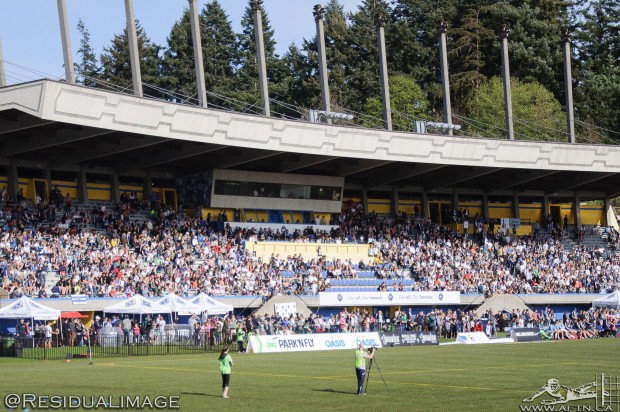 The 2016 USL schedule was released this morning and with a favourable season run in for Vancouver Whitecaps 2, a season to get used to the league under their belt, and an already stronger looking squad, hopes are high that WFC2 will make it to the playoffs this year.

One of the big talking points from the new schedule is that not all of the ‘Caps USL games will be played at Thunderbird Stadium this season, which will certainly please some in the support.

The club will play two matches elsewhere in the lower mainland this summer, at venues still to be confirmed, including a special Monday game for Labour Day on September 5th against Seattle. A new, regular occurrence or testing the waters for a possible move down the road? Hard to say right now, but it’s a welcome idea either way.

There’s a lot of WFC2 games to look forward to in the 29 team league this season, but there was a little disappointment for those of us hoping for more MLS/USL double header away weekends this year.

When we spoke with USL President Jake Edwards on his ‘State of the League’ conference call back in October, we asked him about the possibility of travelling Whitecaps fans getting to see both the MLS and USL sides over the same weekend this season, especially for the Cascadian derbies.

Edwards said the league were “working hard” to have that happen and to select “favourable” dates for the games, but unfortunately, apart from one possible weekend, it doesn’t look like that is going to happen. Disappointing, but with the issues with venue availability and the expanded league, I can only imagine the scheduling nightmare in general.

But enough of that and on to what is happening, and there’s a lot to be excited about for WFC2’s second USL season.

Head coach Alan Koch has already been working hard with his squad this offseason, with a month long camp in November with the re-signed players, Residency talent and some trialists.

Eight WFC2 players are taking part in the ‘Caps preseason camp at UBC this week before the USL team’s own preseason camp gets underway on February 1st.

The ‘Caps kick off their USL season on Saturday March 26th with a trip to Irvine, California to take on Orange Country Blues. That’s the same day as the MLS side are at home to Houston, and is one of nine such scheduling clashes this year. Thankfully there’s no home MLS and home USL matches taking place on the same day amongst that number, but there are three feast of football weekends in store, with three WFC2 home matches taking place the same weekend as the first team are at BC Place.

WFC2 will be away for their first two matches of the season, the second one of which on Saturday April 2nd will be the first of eight Cascadia clashes, when they head south to Merlo Field to take on Timbers 2. Anyone looking to make that trip will be disappointed to know that the ‘Caps MLS team are at home to LA the same day.

Whitecaps 2 will play both Sounders 2 and Timbers 2 four times, with two home matches and two away.

Seattle come a calling on Saturday August 6th at 3pm (MLS team away to Colorado on the same day) and that Labour Day Monday, with trips to Starfire on Thursday June 8th (the day after the Caps host Edmonton or Ottawa in the Canadian Championship) and Friday September 2nd (the night before NY Red Bulls come to BC Place).

Not ideal but the Portland games show a little more hope. Timbers 2 will head to Thunderbird Stadium on Sunday June 19th (MLS team host New England the day before) and for the last game of the regular season on Sunday September 18th (MLS team away at Seattle the night before, so a possible Cascadia double weekend for those heading home). Both of those games will kick off at 2pm.

There is also a potential for ‘Caps fans to take in a Portland double header in May. The MLS team will be taking on the Timbers at Piggy Park in an early afternoon kick off on Sunday May 22nd. The USL sides will meet the day before. BUT…. That USL game will not take place at Merlo Field, but out of town. My best guess would be in Eugene or at the University complex in Corvallis. Still, it’s a long weekend, so depending on where it is, a double dose of derby action could be possible.

Just some other quick game notes….

– WFC2 will kick off their home matches on Sunday April 10th against Sacramento, kicking off at 3pm at the ‘Bird

– Two of WFC2’s home game will not be played at Thunderbird Stadium. The Sunday August 21st game against Arizona and the Monday September 5th Labour Day game against Sounders 2 will be played somewhere else in the lower mainland, at a venue still to be confirmed

– The 30 game season won’t see any cross Conference games, so no matches for Vancouver against Toronto or Montreal

– Of the 15 WFC2 home games, 10 will be on a Sunday, two on a Saturday, two on a Wednesday evening and one on that Monday Labour Day

– Six of WFC2’s last eight matches, and three of their final four, are at home, which could be huge in the season run in

– WFC2 will play on the road to new clubs Swope Park Rangers, Rio Grande Valley FC and San Antonio, with only Swope Park heading to Vancouver

AFTN will once again be bringing you the best WFC2 coverage around this season, starting from preseason camp next week. So be sure to check back on the site and listen to the podcast regularly, and try and get out to as many games as you can. The team is the future of the club and deserves your support.