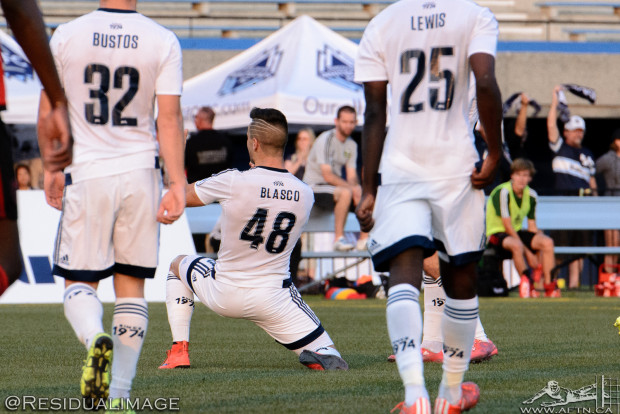 WFC2 made it three straight wins against their Cascadian USL rivals with a come from behind 2-1 victory over Portland Timbers 2 on Friday night.

The win moved the ‘Caps level on points for the last playoff spot in the Western Conference heading into Saturday’s games. That proved to be short lived but with three wins out of their last four matches, the Whitecaps are certainly moving in the right direction and will be in the postseason mix down the stretch.

It was a sparser crowd than usual, just 1128 fans headed along on what was a beautiful night for football, but those that did make the trip took in a proverbial game of two halves.

The ‘Caps looked a little out of sorts in the first half and T2 headed into the break with a one goal lead thanks to a long range effort from Fatawu Safiu, and although Ben McKendry nearly equalised immediately, Vancouver weren’t at the races.

Head coach Alan Koch gave the ‘Caps the kick up the ass they needed during his half time team talk and WFC2 and they were back on level terms two minutes after the restart and captain Tyler Rosenlund grabbed his first goal of the season when he put away an Andre Lewis cross.

It was a much different ‘Caps side now and they deservedly went ahead in the 63rd minute when Victor Blasco and Billy Schuler combined for the third time in two games and the Spaniard curled a nice finish into the net to put WFC2 into a 2-1 lead they didn’t give up.

In fact, they could have added to it and McKendry could only look on as his low effort crashed off the left post and then centre back Craig Nitti tried to lob T2 keeper Justin Luthy from his own half but saw his fantastic effort crash off the crossbar.

Another three points and although Koch was left happy with that, he wasn’t pleased by the Jekyll and Hyde performance from his team.

Also pleasing was Victor Blasco’s third goal in two games. We wondered if last week’s strikes would now spur him on and open the gates for more and it’s looking like it has, although Koch also felt the Spaniard’s performance matched that of the whole team over the 90 minutes.

“In the second half, yes he did [look good],” Koch told us. “I had a chat with him at half time and said the first half wasn’t good enough to be honest if he wanted to build on last week. You expect him to come out firing. He didn’t do it in the first 45 minutes but full credit to him, he did it in the second half.

“He took another step forward in the right direction and hopefully he can keep doing the same thing.”

The game did have some other disappointment for Vancouver, with Brett Levis being stretchered off late on after coming off worse for wear in a 50-50 challenge. The midfielder has been having a good season for the ‘Caps but left the stadium on a cart with his foot and ankle heavily bandaged up and he was unable to put any pressure on it.

A big loss for the team and with Caleb Clarke and Jackson Farmer away with Canada on international duty at the Pan Am Games, the WFC2 squad is getting down to the bare bones. With a busy month coming up, how will they cope?

“The same way we’ve dealt with it all season long,” Koch added. “Obviously when we’re healthy, it’s great and it’s nice and easy. But when you’re players short it gives other guys an opportunity to step in. Caleb was gone today and Billy Schuler stepped in and put in a great 90 minutes work.

“If Brett’s gone for a little while it’ll give somebody an opportunity and they’ll come in and do the exact same thing.”

WFC2 are in action again this coming Wednesday when the previously Western Conference leading Colorado Springs Switchbacks come to UBC. It’ll be a tough game, but this month gives the ‘Caps the chance to make a real push for a playoff spot.

With a trip to Portland coming up next Sunday, and then a home and away set against Tulsa Roughnecks, points are up for grabs against two teams below them in the standings.

Koch is hoping to use the recent results to now push on down the stretch but he’s not looking too far beyond the next game right now.

“We want to make the playoffs,” Koch stated. “That’s our goal. We’d like to push on and see how well we can do this last little bit of the season. We don’t look too far ahead to be honest. We’re going to focus on Wednesday.

“We know next Sunday down at the Timbers will be a tough game, but we know we’ll have a tough game on Wednesday first. So we’ll go one game at a time. We’re not looking too far ahead of that, particularly with the group that we have. We’ll get ready not to take care of business on Wednesday.”

AFTN photographer Tom Ewasiuk was at WFC2’s exciting win over Portland to capture all the action from before, during and after the game. Here’s our “Story In Pictures”, with a full Flickr slideshow at the end. 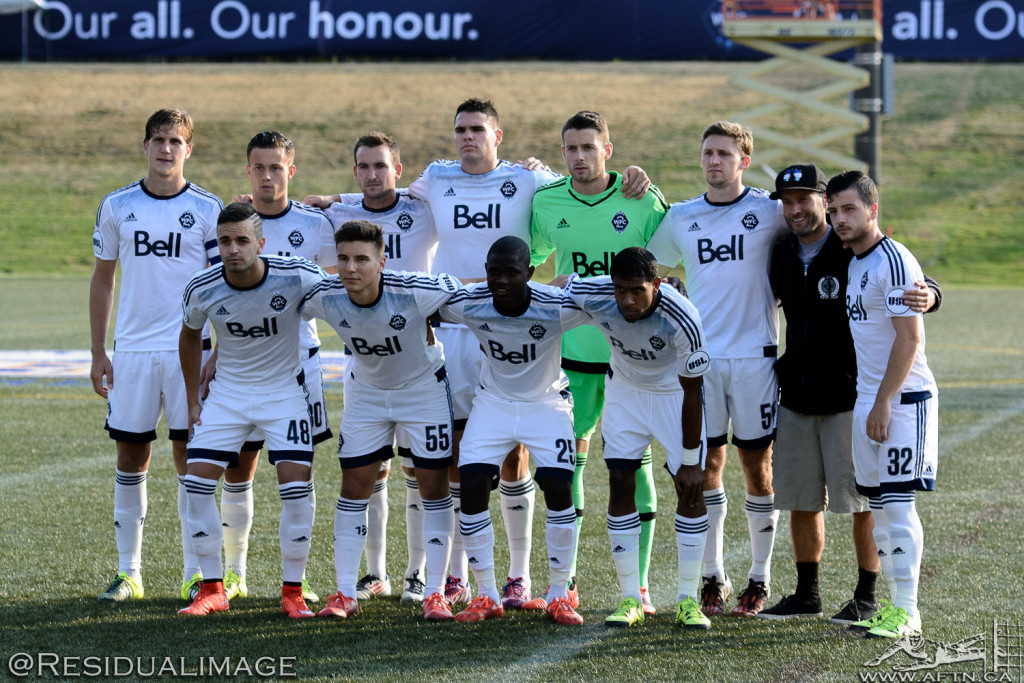 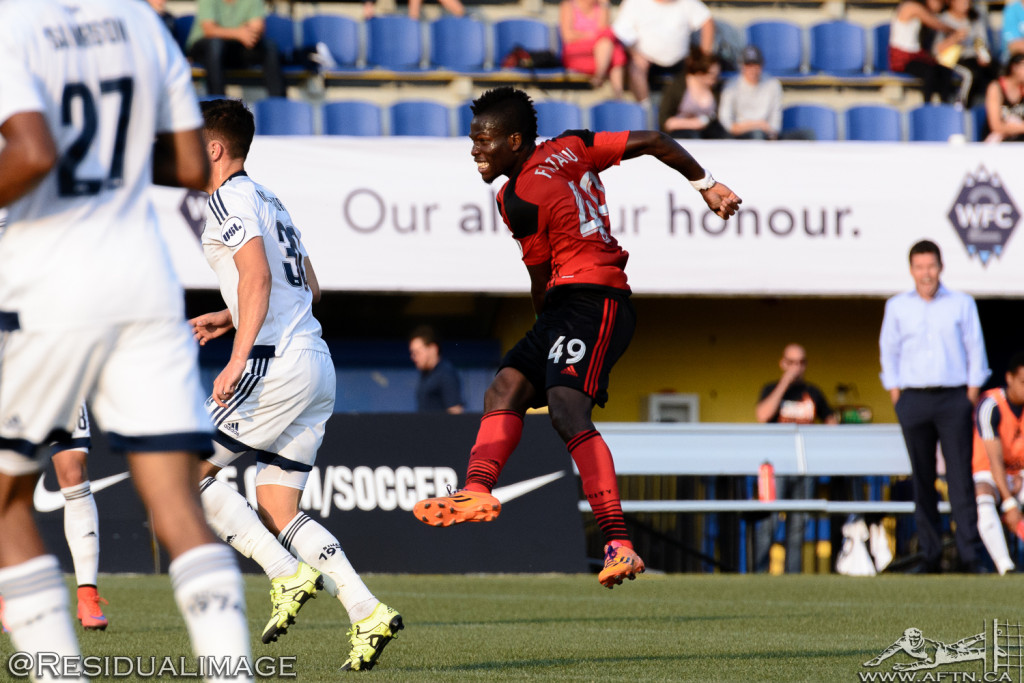 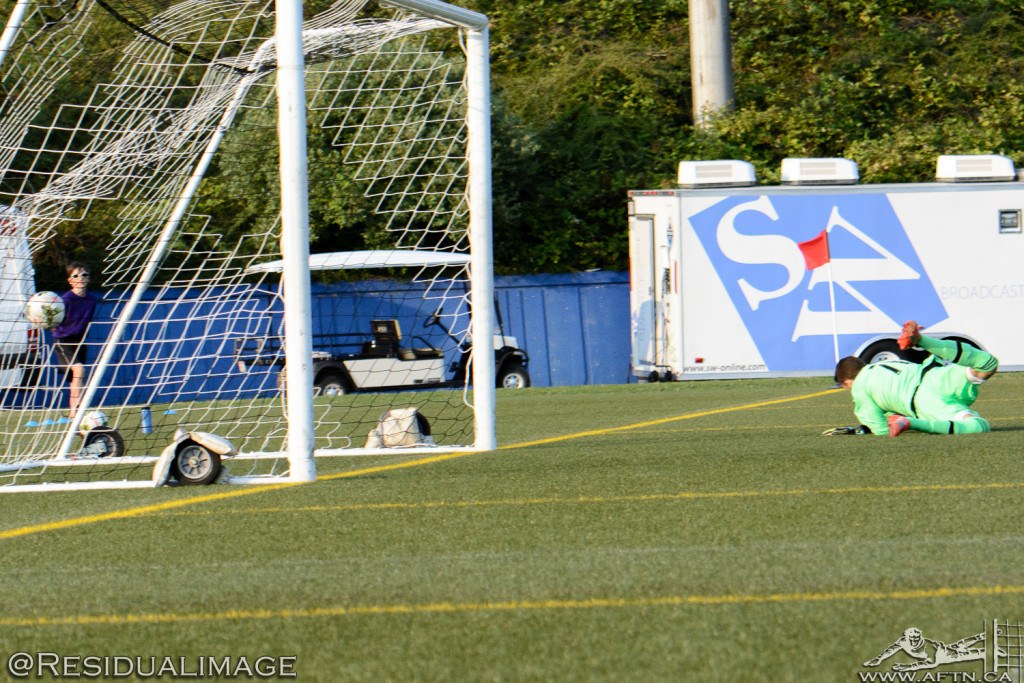 That beats Paolo Tornaghi and nestles nicely in the net 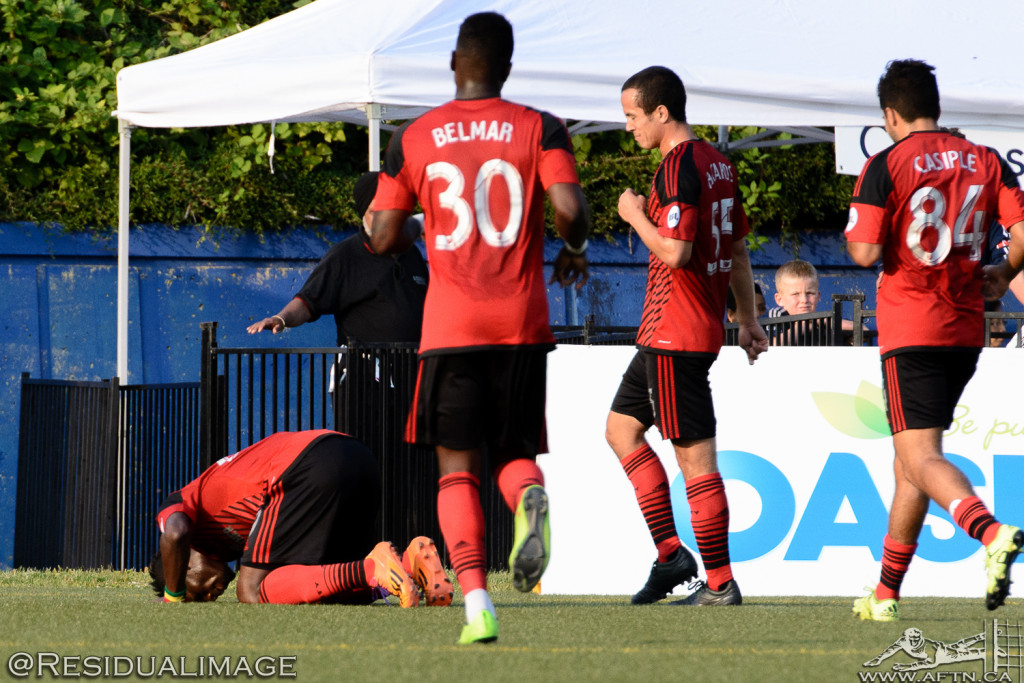 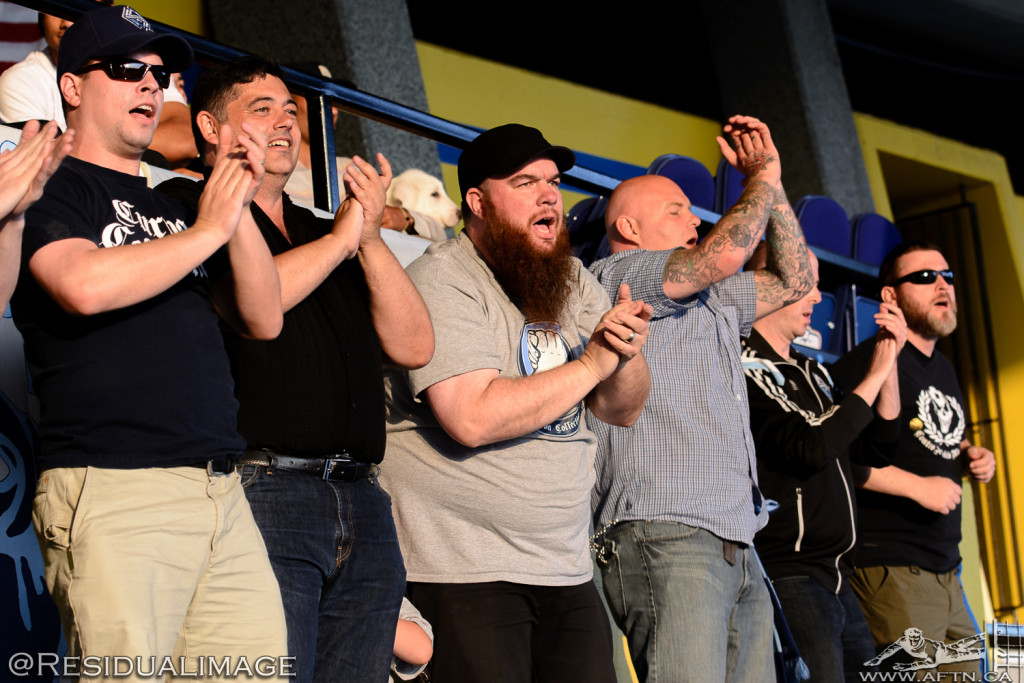 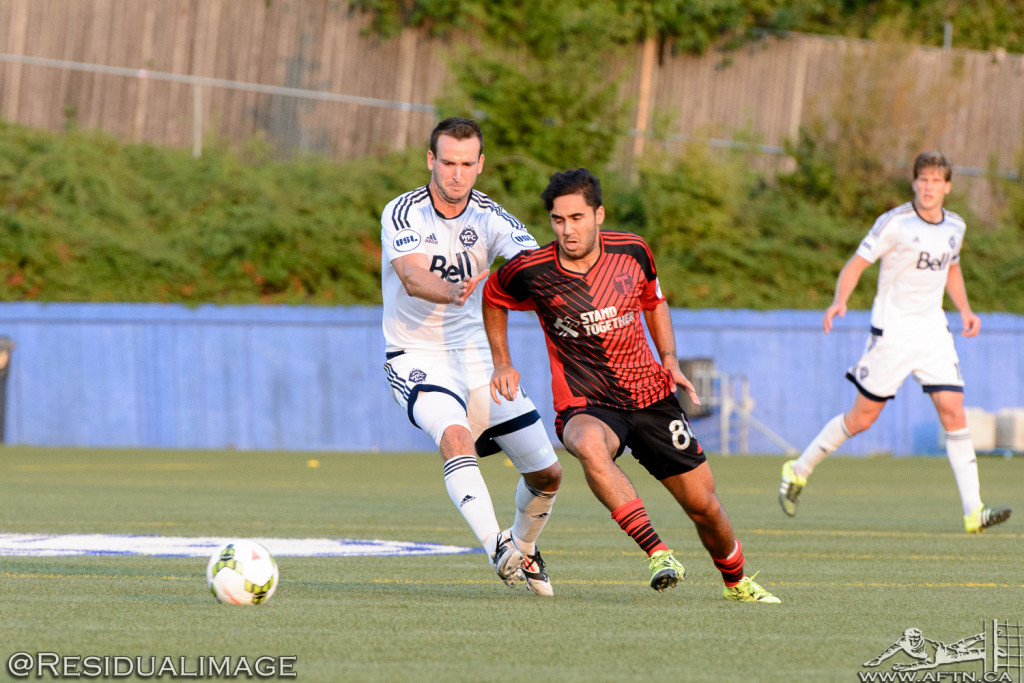 After a half time kick up the ass, the ‘Caps come out firing and Tyler Rosenlund grabs his first of the season in the 47th minute 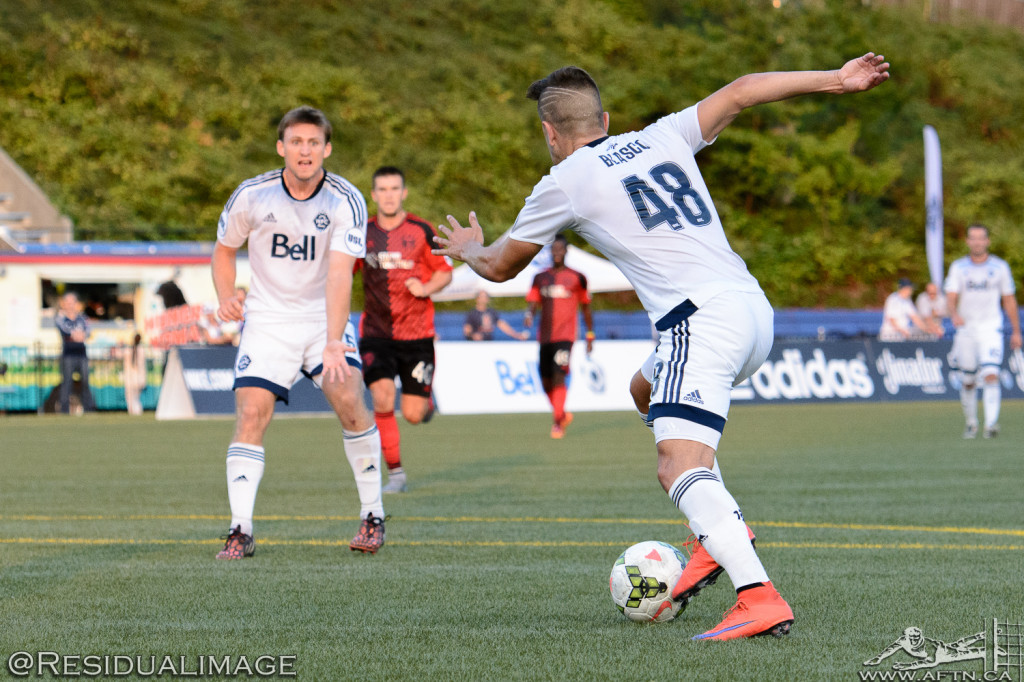 Then in the 63rd minute, the dynamic duo of Victor Blasco and Billy Schuler link up again 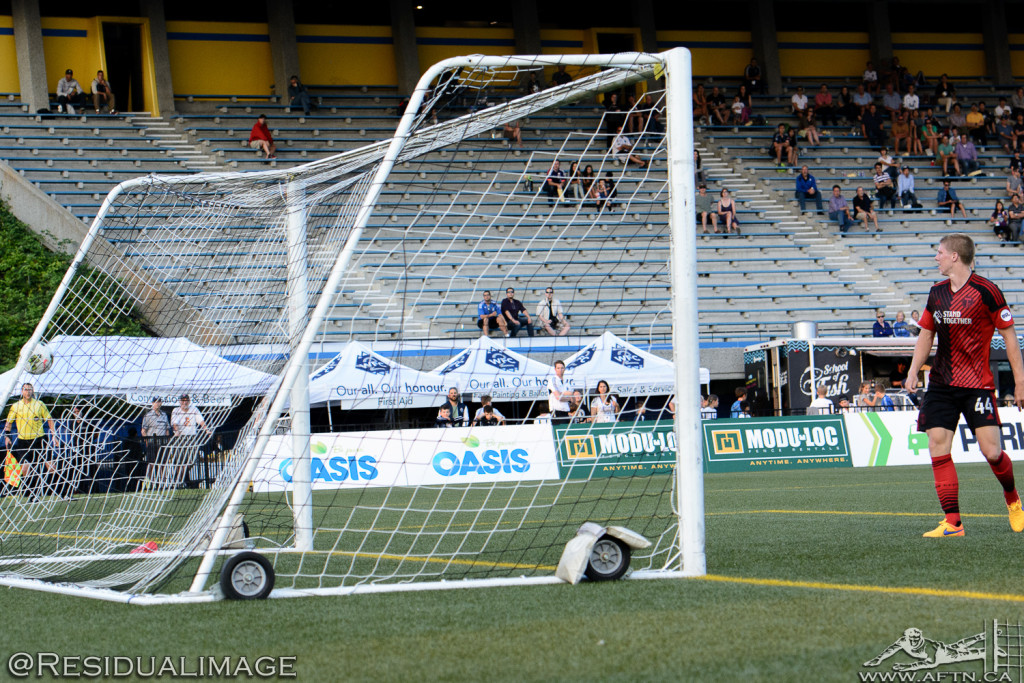 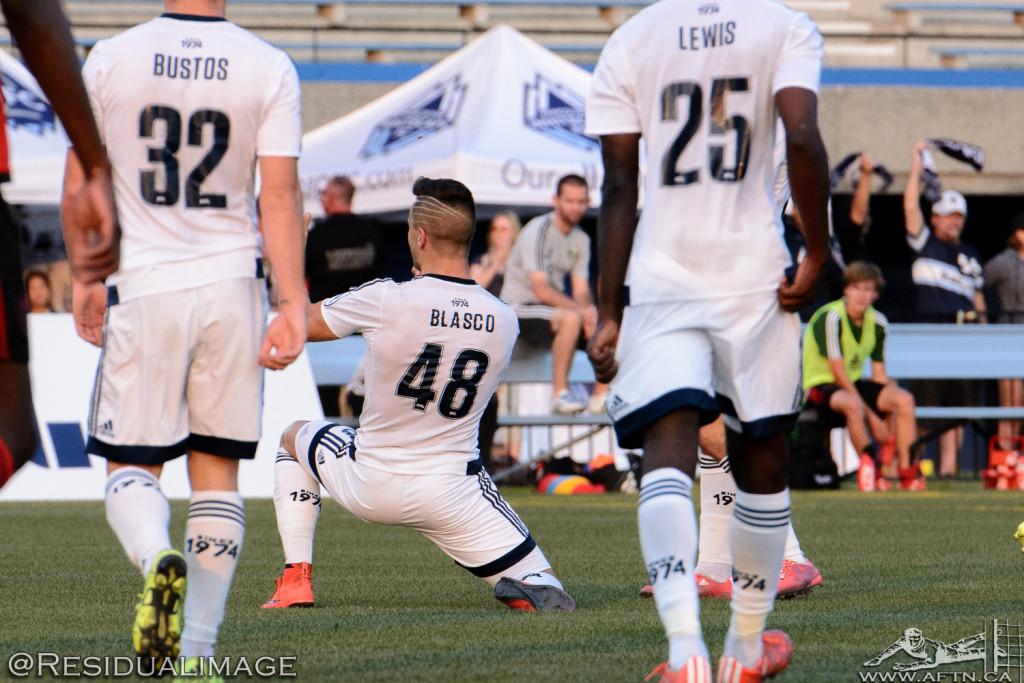 Blasco is blazing a trail this month in USL 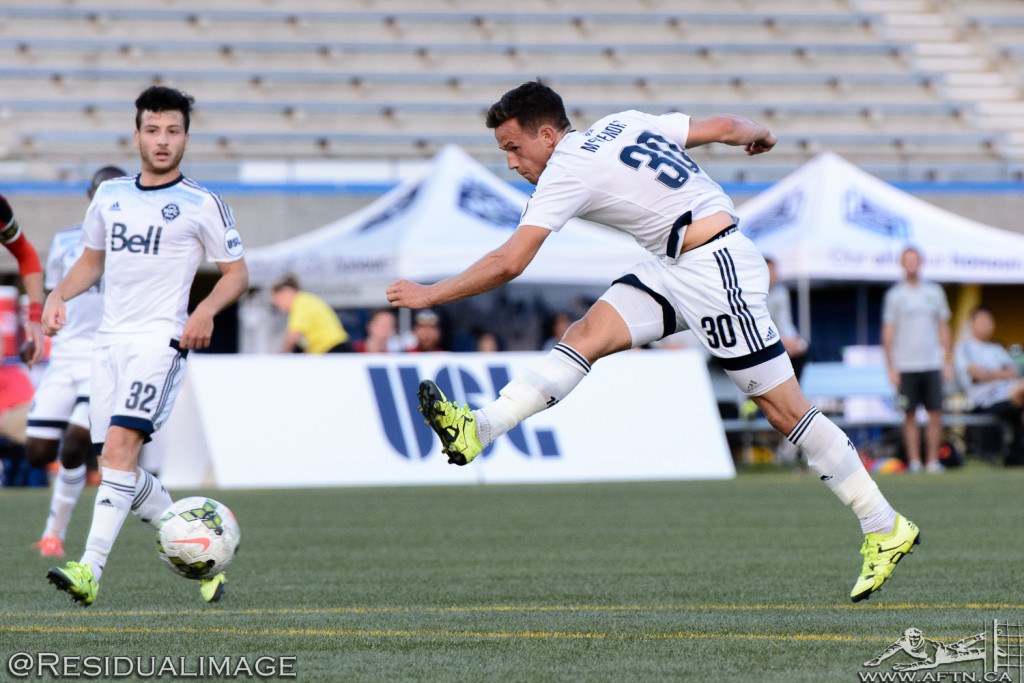 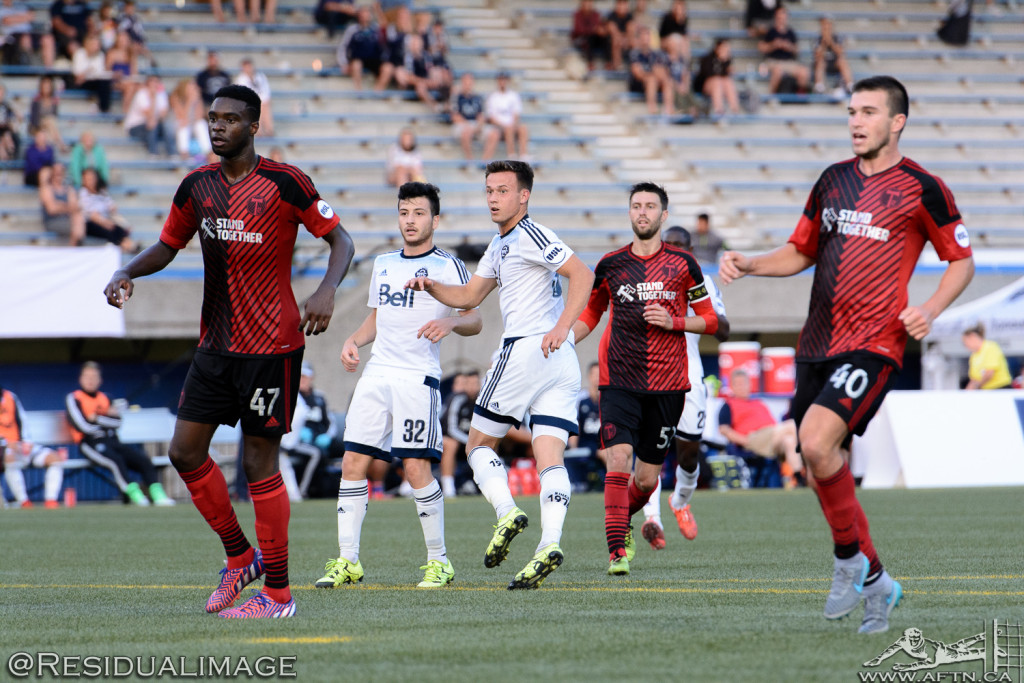 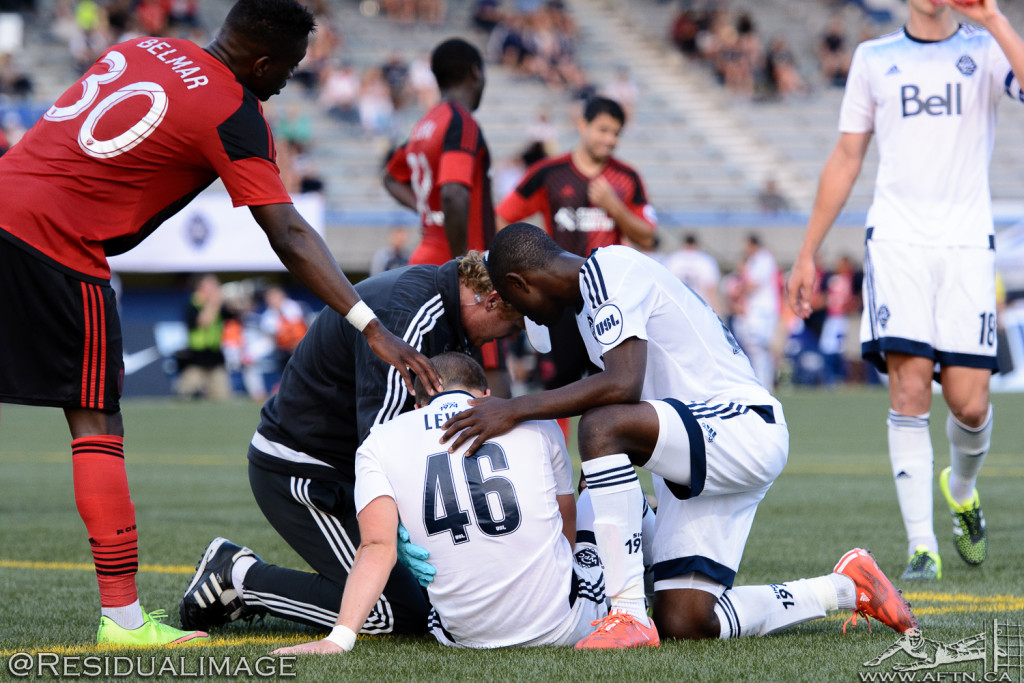 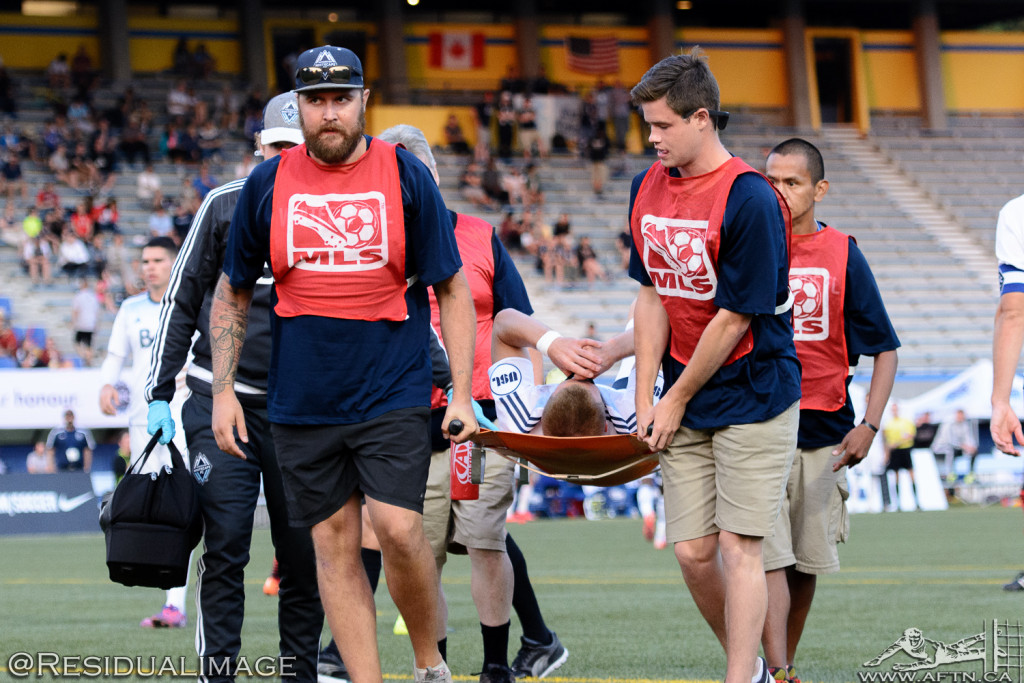 And is stretchered off in some pain 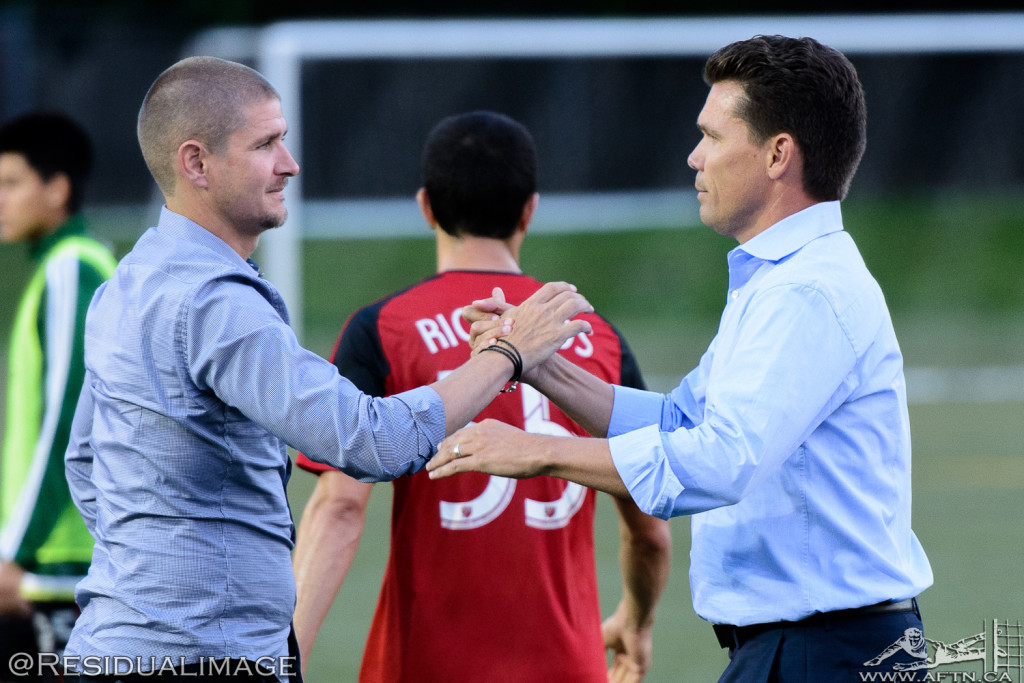 Robbo congratulates Alan Koch on another win against a Cascadian rival. Next weekend they’ll plot a double header down in Portland 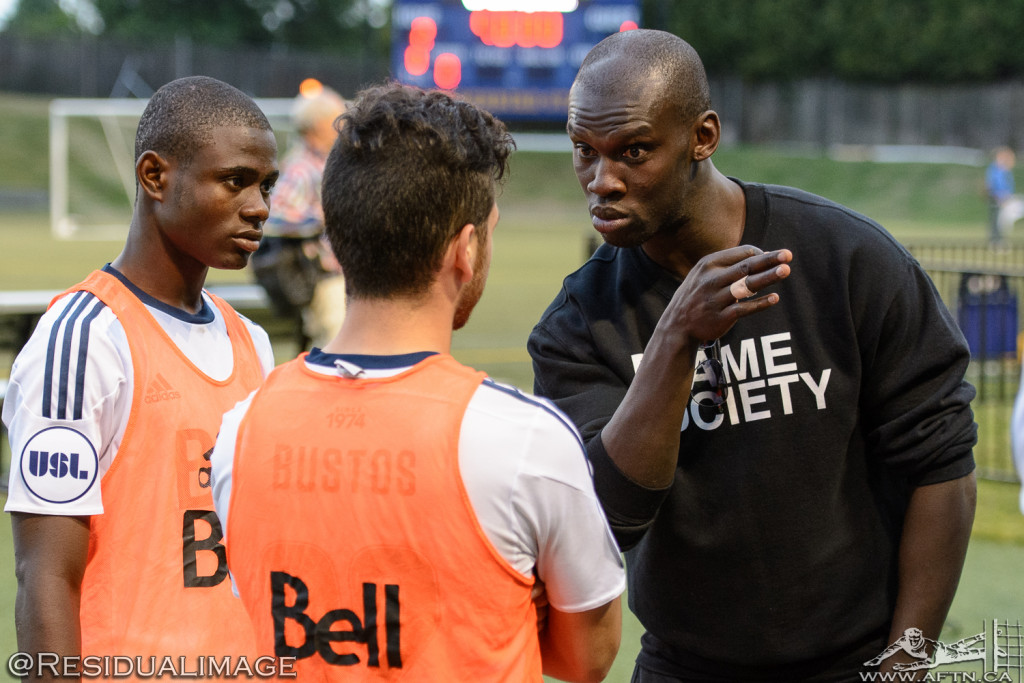 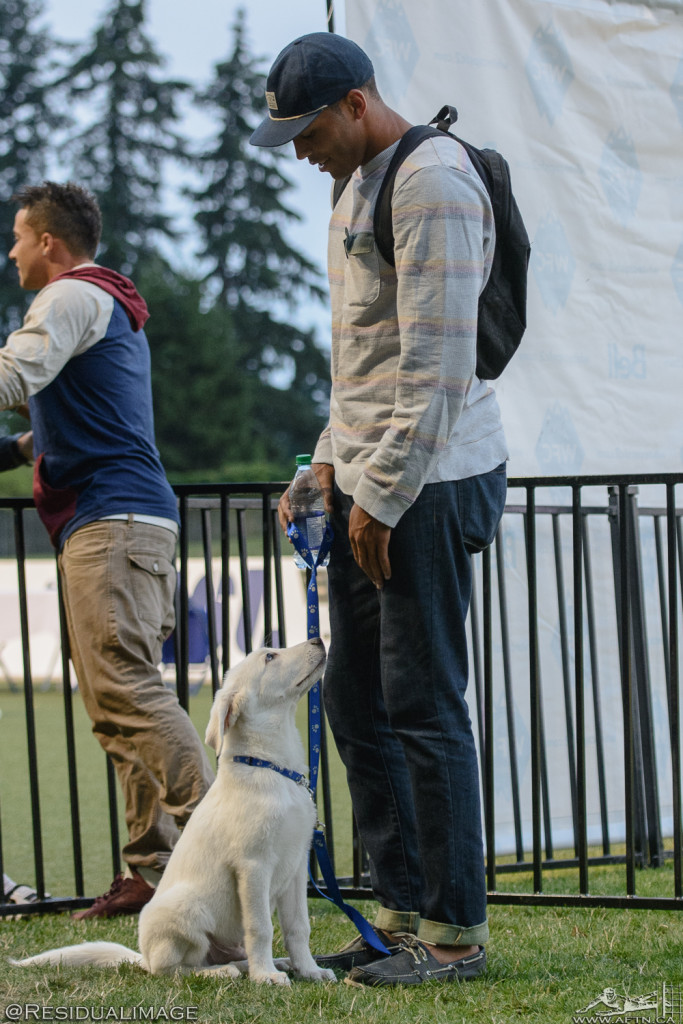 One man and his dog – as if his looks didn’t make Christian Dean a babe magnet already!