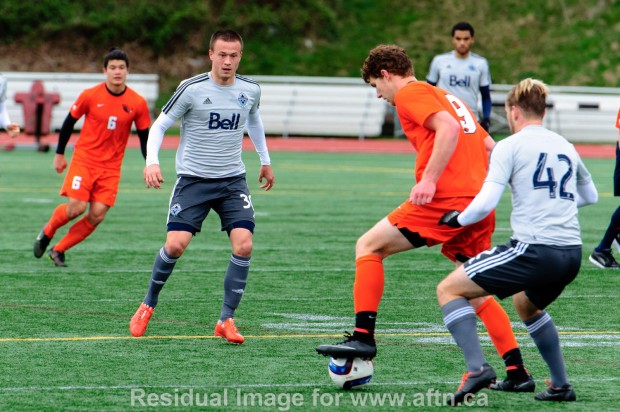 WFC2 wrapped up their month long preseason camp with a hard fought victory over Oregon State Beavers on Sunday.

The victory made it three straight wins in eight days for the Whitecaps, coming on the back of a 4-3 triumph over Seattle last Sunday and a 5-1 hammering of SFU on Thursday.

But they were made to work hard for the win by the NCAA Division 1 side, having to come back from 1-0 and 2-1 down before Jovan Blagojevic grabbed an 84th minute winner to seal a 3-2 victory for the ‘Caps [You can see our Residual Image photo gallery from the match at the end of this article].

There are certainly still some kinks to be ironed out, but overall, WFC2 coach Alan Koch was delighted with what he saw from his side against the two NCAA teams this week.

“The first 25 to 30 minutes against SFU, they gave us a good challenge,” Koch told AFTN after the Oregon match. “Then I think our guys figured things out and picked it up, came out and put in a good performance the rest of the way through.

“Today, and I give Oregon State credit, for the majority of the 90 minutes they made us question ourselves at times and made us have to go out and actually problem solve on the pitch. Having said that, I give our guys credit. It wasn’t a great performance but they figured it out, they got themselves a result. We win and we should move forward now to the season in good confidence and feeling pretty good about ourselves.”

Oregon State started the match strongly, going ahead just two minutes in, as the ‘Caps defence were being given a testing time. But they saw off the pressure and Spanish winger Victor Blasco tied the score up in the 16th minute, after his shot was deflected in off a Beavers defender after some fantastic build up work from Ben McKendry, who had broken up an Oregon attack.

The Whitecaps finished the half the stronger but Oregon State came out refreshed for the second half and went ahead for a second time six minutes in when they headed home a corner.

But the ‘Caps regrouped and then controlled the rest of the match.

WFC2 captain Tyler Rosenlund tied things up again in the 65th minute when the ball came to him on the edge of the box from a corner and he drilled a fine shot into the bottom left hand corner of the net.

You got the feeling that a WFC2 winner was coming and it did with six minutes to go, when McKendry went on a run and played in Blagojevic, who took a touch before burying it past Whitecaps Residency alumni Nolan Wirth.

McKendry and Blagojevic had linked up well, and that was one of the positives to take from a mixed performance, that didn’t see too many players stand out on the day or stake a claim for themselves in next week’s starting eleven.

The WFC line-up for the game was as follows:

Preseason is in the history books and the WFC2 squad now have a week to focus and prepare for their inaugural USL match next Sunday.

Seattle Sounders 2 will provide a stiff test for the Whitecaps at Starfire next weekend. The Sounders kicked off their USL season on Saturday night with an impressive 4-2 win over Sacramento Republic in front of a sold out home crowd of 2,951 fans. All six goals game in a frenetic second half.

But after a preseason which has seen his squad quickly gel and start to show the makings of an impressive attacking side with fierce competition for places, Koch is heading into the USL season in confident mood. The tough part is actually now nailing down what his starting eleven is going to be.

“I think we’re in a good place, ” Koch told us. “We have a good group of players They’re enthusiastic, they’re motivated, they’re fit, they’re ready. We have a good grasp on how we’re asking them to play. At this stage it’s now trying to figure out exactly what the starting line-up is going to be.

Exactly what players from the MLS squad Carl Robinson will want to get regular minutes right now is the unknown quantity in all of this. Several have featured in the preseason matches and training scrimmages, including centrebacks Christian Dean and Tim Parker. While they, and others like Marco Bustos (who is currently injured) and Kianz Froese, will move freely between the two squads, we also expect to see Andre Lewis announced as being loaned to the USL team for the season. This frees up both a roster and international spot, allowing Robinson to finally sign Robert Earnshaw.

But as Koch told us before, competition for places on the team is fierce and he has a couple of players battling it out for every position.

We expect Marco Carducci to get the initial nod in goal, although Spencer Richey has been pushing hard. They may share starts to begin with but Koch has told them both that the best keeper will win out in the end and make the starting spot his. Carducci can still play for the U18s in USSDA action, as he was away doing this weekend.

The defence is a toss up right now, with so many players pushing. Jackson Farmer has looked very good in camp in both the right back and centreback positions and we’re fans of what Chris Serban can bring to the team in either full back role. The two centrebacks could change from game to game with four guys, including new addition Craig Nitti, all wanting and needing minutes.

Captain Tyler Rosenlund should fill one of the DM roles and whether it will be Mitch Piraux or Ben McKendry beside him will have to be seen. All three can also play other midfield roles. Brett Levis has featured regularly in the preseason games but I think he may miss out on a starting spot initially. Victor Blasco may have done enough against Oregon State to see him starting on the right, with Jovan Blagojevic coming on as a sub, although it is Blagojevic who has the contract right now. Marco Bustos will play the number 10 role when fit, but there’s a few others who can step in there right now until he is.

Up front, for me, Mackenzie Pridham has shown much more than Caleb Clarke these past few games, although Clarke did do well against Seattle. Pridham banged four goals in against SFU and hit the bar against Oregon State, and that one looked like it had crossed the line. We all know what Clarke can do, he now needs to start showing it.

So a lot for Koch to think over this coming week. But whoever ends up taking the pitch at Starfire next Sunday, the WFC2 coach is confident they’ll get the job done and the ‘Caps will get their new USL era off to a successful start.

“We’re going in to Seattle,” Koch said. “They played last night and won, so they’ve picked up three points already. They’ve got that first game, first jittery nerves, out of the way already too. But we’ve got a good week [ahead]. We’ll put in a good week of training in together, go out and give it our best shot. We’re feeling good about ourselves, so there’s no reason why we can’t go there and win the three points.”