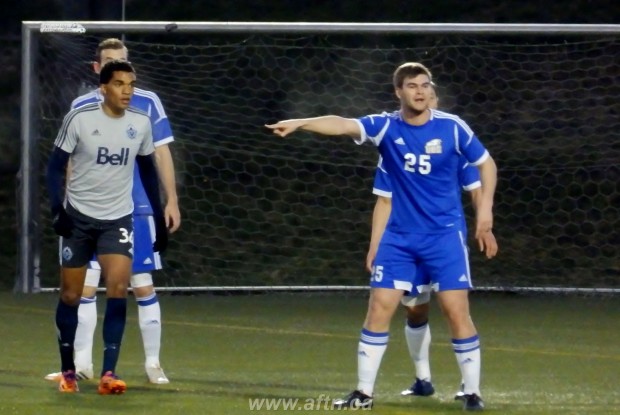 With WFC2’s first ever USL season kicking off in just under three weeks, time is already at a premium in terms of building chemistry and a competitive squad before they head down the I5 to square off with Seattle on March 29th.

As it stands right now, there are only seven players officially named to the WFC2 roster, all of them Canadian – Jovan Blagojevic, Jackson Farmer, Jordan Haynes, Brett Levis, Mitch Piraux, Tyler Rosenlund and Chris Serban. That number will obviously be bolstered by several players from the MLS squad, such as Marco Bustos and Kianz Froese, but there are still a lot of places in the USL squad up for grabs.

Head coach Alan Koch continues to weigh up his options as he narrows the training camp down to his initial squad and the next stage of that process was to run the eye over his players in the ‘Caps first preseason friendly against UBC Thunderbirds on Monday evening.

The game ended 0-0, with both teams having their chances. UBC shaded the first half, with ‘Caps goalkeeper Spencer Richey being forced into a couple of big saves, while Caleb Clarke had WFC2’s best chance, sprinting clear before drilling low into Thunderbirds keeper Luke O’Shea.

The Whitecaps went with nearly an entirely different team for the second half, and dominated proceedings. Bustos was particularly impressive and creating a number of chances and having a shot cleared off the line after a mazy run past a number of UBC defenders and the goalkeeper. It deserved a goal. Kianz Froese also had an effort scrambled off the goalline and the ‘Caps had a number of chances fly narrowly past the post but couldn’t find the back of the net.

For a first run out of his squad, Koch was happy with a lot of what he saw against a talented and well organised UBC side joking with AFTN after the match that “we’ve got a bunch of guys who really don’t know each others names at this stage, some guys do, some guys don’t”.

In jest, but true. While a number of the players are very familiar with each other’s style of play from playing together in the Whitecaps Residency and PDL teams, most of the squad have only been together for two weeks now. That was the thinking behind the make up of the two teams that Koch put out there for the game.

Despite the strong showing, the new ‘Caps coach knows there’s still a lot of work to do to get the team ready for the season ahead.

“We mixed up our group completely,” Koch told AFTN after the game. “We’re obviously trying to figure out who’s going to play for us come our first game in a few week’s time. I thought we were good. We were organised, we were relatively sound defensively, created a few opportunities. Obviously we didn’t have a sense of conviction in front of net. For our first game, you can’t really expect much but we got through it. It’s an exercise in order to get ready for the next game.”

Defensively, Richey and Marco Carducci shared the goalkeeping duties, playing a half each. Farmer was looking sharp in the right back role, getting forward on a number of plays in the first half, while Christian Dean marshalled the centre of defence for that first 45, alongside 2015 SuperDraft pick Craig Nitti.

Described by Koch as “big, strong, eager to learn”, Loyola Marymount University graduate Nitti played with the Portland Timbers U23 in 2013 and has just trained with the ‘Caps for a week following surgery on a foot injury. The club will need to make a decision on him soon. He’s a big lad and certainly looked a dominating presence alongside Dean back there, but that position has so many other strong options right now. Fellow SuperDraft pick Tim Parker played in the backline for the second half alongside Residency alumni Derrick Bassi, and both did well and looked comfortable.

While Nitti will continue to get a look for now, one draft pick who has already left the camp is Canadian centre back Nikola Paunic and there are no plans for him to be with the team moving forward.

Dean played the whole game, switching to left back for the second half, while Ethen Sampson came on and played on the right.

The Whitecaps desire moving forward is for all their teams to play to the same philosophy. Defensively sound, fast paced going forward. For now, that means a 4-2-3-1 formation. Ben McKendry and Brett Levis took on those roles in the first half, with Mitch Piraux and captain Tyler Rosenlund coming on for the second. 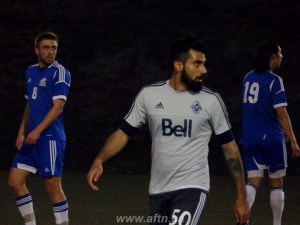 Elsewhere in the midfield, winger Sahil Sandhu (pictured left) got a run out in the first half and has impressed in camp so far. Sandhu has been playing with VMSL side ICST Pegasus and finished second in the VMSL goalscoring charts with 12 goals this season, one behind former TFC player Nick Soolsma of Langley Hurricanes.

What the ‘Caps won’t want to see is WFC2 suffering the same goalscoring woes as the first team. All build up and no finish. It was on display against UBC. The sharpness and clinical eye for goal wasn’t quite there yet, but it’s certainly very early days for the team to gel and the Thunderbirds are not a team that give up many goals at the best of times.

One player who won’t be banging in the goals for WFC2 though is UBC striker Niall Cousens. The former ‘Caps PDL player was in camp initially with WFC2 but has already been released and lined up for the Thunderbirds last night.

Disappointing, as we’ve liked what we’ve seen of Cousens for both the Whitecaps and UBC the last couple of years and he would have added a much needed aerial threat up front.

Koch has Caleb Clarke to call upon in the striking capacity, and 2014 draft pick Mackenzie Pridham (see our feature with him from last February HERE) played the second half last night and looked to have some potential as he battles back from an injury plagued year. But the ‘Caps coach still has his eye out for one or two more additions to his squad, especially up front.

“We are looking at a couple of other guys,” Koch told us. “We’re trying to see if we can get another striker. I think everyone in football is looking for a striker because you need somebody to put the ball in the back of the net, so we’re definitely looking.

“I don’t think we’re in a panic because we didn’t score any goals in our first friendly, but we’re always looking to upgrade, to get better. We’ll work with what we’ve got but we are looking for one or two other players too.”

What Koch definitely has with his current squad though is competition for places. That was clearly evident in a WFC2 intrasquad game I took in last week, with the ‘B’ team, for want of a better description, running out 3-1 winners over a side many could predict would be close to a starting line-up come the first game.

That competition and hunger will continue to increase as the season gets closer and it’s just what Koch and the club want to see.

“There’s a lot of competition,” Koch told us. “We’ve got at least two good players in every position, which is nice, and that’s why in that game there was that competition. Tonight, we’re playing against outside competition, so we had two different groups that played in the first 45 and the second 45.

“The guys know it. They know they’re competing for spots. It adds a little bit of pressure on them and I think some guys played tonight with a couple of weights on their shoulders and I think as soon as they realise they don’t need to play like that and they need to go out there and play with confidence, the better they’re going to be and the better we’re going be as a group too.”

WFC2 have three more friendly matches scheduled before the USL season kicks off in 19 days, travelling down to Seattle on Sunday to face Sounders 2, before finishing off the preseason with games against SFU on March 19th and Oregon State on March 22nd.

By the time those final couple of games come around, we should have a better idea of just what shape and make-up the squad will have going into the opening match.