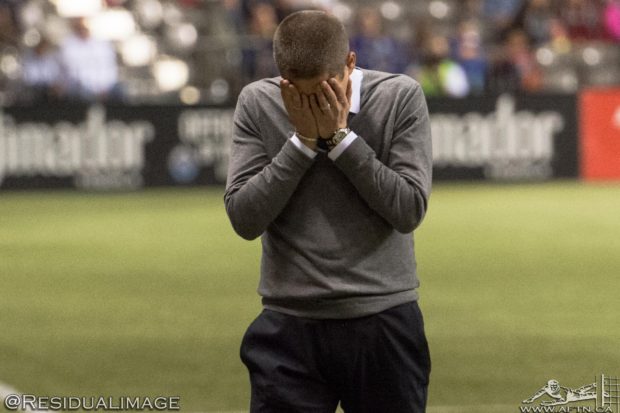 As I sit here in front of my laptop, staring at the blank screen, my mind is wandering. It was another lacklustre heart-free game by the struggling Vancouver Whitecaps. I have lost track of how long it has been since I have been excited to watch this team. I know it is the dog days of summer, but it is really hard week after week, and game after game, to write about this team.

Us bloggers in Vancouver should be used to this midsummer and late season collapse, but it never gets easier. We could all just run the same story every week and just change the name of the opposition. We could keep the same name of the struggling Whitecaps players, talk about the chances they missed, and how the back four was below average at best.

The past three weeks we have really seen this team take a hit online and in the media. The buzz from last season, when the Vancouver Canucks and BC Lions were struggling, is gone. The atmosphere in BC Place has deflated faster than the roof did in the stadium on January 6th 2007.

The locals are mad and they are calling for people’s heads….. And no-one is safe…

Some hardcore Whitecaps supporters on Twitter are calling for #LenarduzziOut. 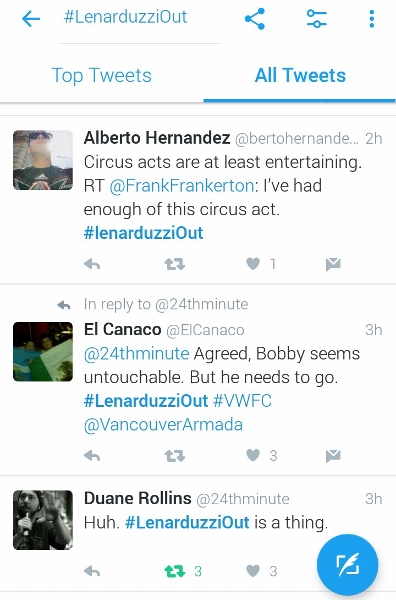 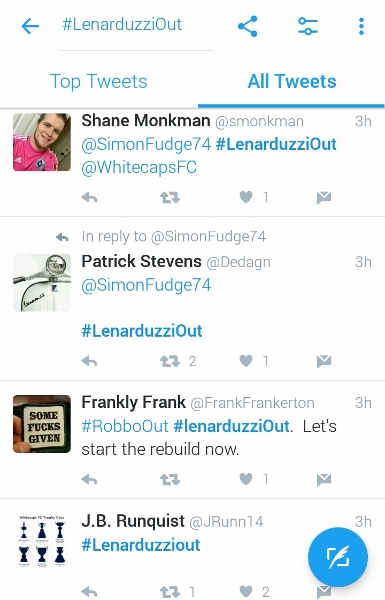 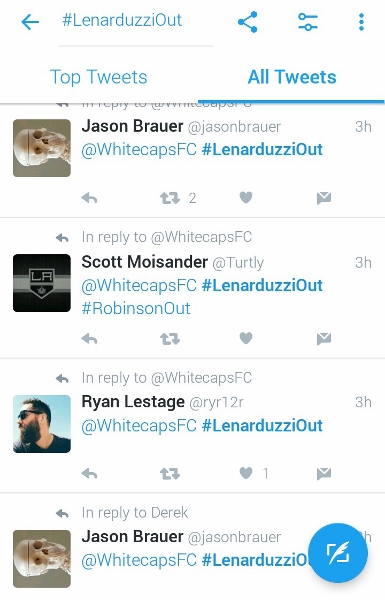 At half-time of the KC game, Bobby Lenarduzzi gave an interview with Perry Solkowski and his lack of effort, excitement and answers that paying supporters wanted to hear riled up the masses. He admitted that they will not be spending millions on a quality Designated Player and will continue to invest in the youth.

Well long term that isn’t such a bad idea, but it hasn’t worked out the past few seasons with getting Residency (or even USL) players up to the MLS first team.

This season we have seen the emergence of Residency players moving on up to the USL Whitecaps 2 side. We have seen Kadin Chung, Alphonso Davies and Matthew Baldisimo step up and give Alan Koch great minutes, and the future is bright with them in the wings. But now we need to see the next step. We need these players to get MLS minutes and make a difference. We are seeing it at a smaller scale with Davies getting minutes and continuing to improve game after game.

But this also is a story we have seen before. Remember Ben Fisk, Bryce Alderson and Caleb Clarke? They were all great Residency players who were supposed to be the ones to make the big jump and be serviceable MLS players. None succeeded, and neither have the Residency graduates that followed them.

But whose fault is that?

Is it the Whitecaps front office committee (“affectionately” known as the Football Death Panel) headed by Lenarduzzi, Greg Anderson and Rachel Lewis?

Do we blame Carl Robinson, who has brought in the players and hasn’t gotten the results he thinks he should get out of them?

Or is the blame solely on the underachieving players, who at times this season have been, I hate to say it, really, really shitty in all aspects of the game? 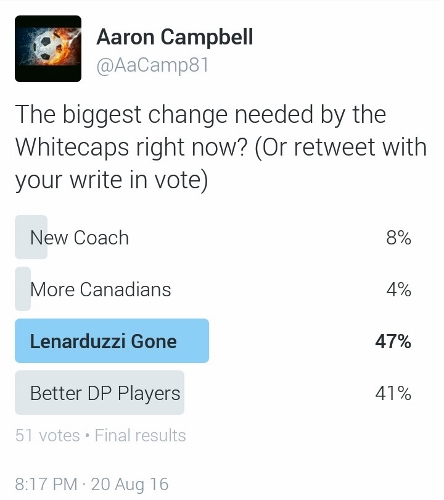 Personally I think the problems this season have been a mixture of all three of the above questions.

And Greg Kerfoot, and the other Whitecaps invisible owners, sorry but those players cost money. Millions and millions of dollars, and sometimes tens of millions of dollars. In today’s world of professional soccer, money talks. Any player will play for any team in any league if the money is right. That is the reason why the Chinese Super League landed a handful of top soccer players this past year.

I know we aren’t spending that kind of money, but $5-$10 million on a world class striker should not be out of the question for a team like the Whitecaps. When you look at the expansion fee paid by the Whitecaps in 2011, and the crazy amount it is now for new teams coming in (and then divvied up) to the league, that’s just a drop in the ocean.

The owners of this team need to be vocal and let the supporters know that this is not acceptable and they understand the frustration. The day to day hardcore supporters need to hear from someone other than Robinson and Lenarduzzi that the future will be bright. They need to reassure the people who spend their hard earned money on tickets, food and merchandise that next year will be different.

These are problems that the casual Whitecaps fans have no clue about, but the complaints are starting to be heard in aspects of the media in Vancouver. 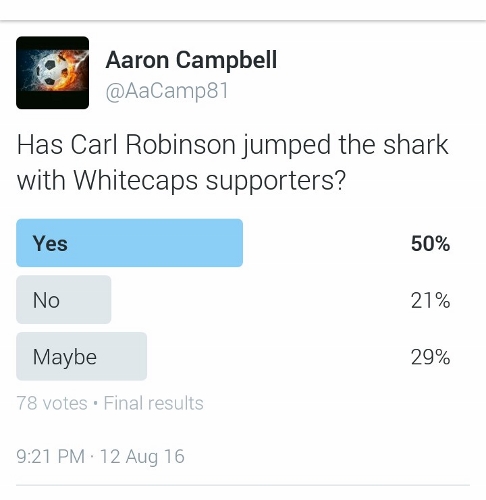 There is something different about Robinson this season. He has seemed to lose his spark and fun he usually showed on the sidelines. He seems to be repeating the same story over and over again about not giving players opportunities in games when they struggle, but then you see a player like Matias Laba and Pedro Morales struggle and get the starts (albeit Laba was finally dropped last night and didn’t seem too happy about it on Twitter). He has continued to put players out of position on the pitch and not put them in the proper positions to succeed.

What the front office needs to know about Robinson is he doesn’t need the Whitecaps. With his experience, contacts in Europe, and young career in front of him, he can get a job in most leagues. Sure he might not get a top notch managerial job right away, but he could get a job closer to Wales and his family.

He has always said he had a seven year plan to be a manager in professional soccer. That plan was fast tracked and it only took three years. There is nothing stopping him from moving over to England and taking a Football League Championship or League One job.

He may not have the pick of the top quality teams, but he could get himself into the door and have a long respectable career over there.

Let’s just hope that the front office doesn’t push Robinson out this off season and blow this whole team up and start all over without a long term plan in place.

With all the struggling players like Laba, Morales, Kendall Waston and Cristian Techera getting a lots of minutes week after week, something has to change and it has to change quick. We know all the players can’t be quality all season long but it also helps when they don’t all struggle at the same time. When they do we get all the exciting football we have seen in the past six weeks.

Maybe the owners, front office and coaching staff will get the message when these “sell-out” crowds start falling faster than Felix Baumgartner’s world record freefall parachute jump. Would they notice if the Southsiders, Curva Collective and Rain City Brigade supporters’ groups protested in silence the next home game? Would they notice if the whole supporters’ section turned their backs to the pitch for the first ten minutes of the next home game?

With all that doom and gloom, we can still advance in Champions League and win a Cascadia Cup this season….

Yippee for that. Am I right guys?…