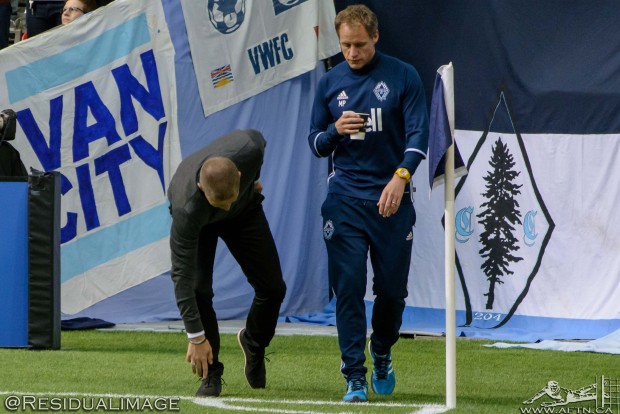 “Whatever is the lot of humankind
I want to taste within my deepest self.
I want to seize the highest and the lowest,
to load its woe and bliss upon my breast,
and thus expand my single self titanically
and in the end go down with all the rest.”

Poor Dr. Faust. He is bored with life and seeks the indulgent pleasures and complete knowledge of the world, but it will cost him. He conjures up Mephistopheles, the devil’s emissary and makes a deal: all the pleasure of the world for 24 years of damnation in hell. It takes a serious amount of suffering to make a deal like that. This past month I was getting to know how he felt.

This is a ridiculous sport. It defies logic, it pulls on the heart, it requires unnameable rites at times to get a result.

There was a moment when a few of us were walking away from BC Place into the rain on Saturday night when we just got quiet for a moment and then tried to put a name on the feeling. We had just beaten the top team in our league 3-0, scored our first goal from open play, witnessed another Jordan Harvey masterstroke, and saw our team emerge from under a cloud of poor form, misfortune and angst riddled football thanks to an unavoidable Dallas mistake. What do you call this feeling?

Last week Russell Berrisford said on twitter that we have looked “not incapable of scoring” which is why our recent run of “totally incapable of scoring” was so perplexing. I was certainly beginning to think it was down to a curse, because that’s the only thing it could have been. We aren’t a bad team. Our players have skill. But lately the team has had all the chemistry of two lumps of titanium sitting side by side. Solid looking, but not much happening.

So it was down to shaking curses. We have been here before. Last season, it was clear that voodoo was required to do something about winning the Voyageurs Cup, a poisoned chalice that had eluded our grasp for a not insignificant 13 years.

We tried all manner of charms including tweeting out our now famous #GTFC hashtag (which stood for Get the Fucking Cup, but then tied us to the fortunes of Grimsby Town Football Club). There was also the fact that I drove 500 miles from Revelstoke to Vancouver to make it home in time for the match, a move which Mark Dailey of From The Backline claimed would be required of all curse breaking situations going forward. It also helped that Robbo started his best XI on the day.

Saturday night required curse breaking. And so some of our Pigeon Casuals refused to participate in the pre-game march. I picked up where I left off by waking up in Albuquerque and travelling by #BlueAndWhiteAirForce to get back for the match. A Bob the Builder action figure that had taken on iconographic significance was given away. Even Robbo got in on the action, ditching the Sea to Sky jerseys and going back to our home whites. A million small things were reconsidered in a concerted attempt to deflect the inevitable.

Rituals completed, the only thing left to do was sing and it didn’t take long for the full voice of the Southside to blow out of the rafters like a katabatic wind, roaring onto the pitch, making every Dallas attack an uphill battle, forcing shots high above the net, and eventually propelling an own goal past Chris Seitz.

In the stands we were nervy to begin with but that changed quickly as the signs began to appear. Pigeons flew through in the rafters among us, an omen which happened right before Pedro Morales scored our second goal in Seattle, and which is considered a good sign in upper 253. Jordan “Goal Machine” Harvey, a talismanic figure if ever there was one, poached an errant clearance and coolly slotted home, just like he promised he would before the match:

@brettness37 I'll definitely be getting in the box!

Kekuta Manneh’s nutmeg of Seitz was the unlikely conclusion to a trio of surprising goals. I can’t remember the last time a Whitecap ever scored by nutmegging a keeper, the mists of time are that thick.

After the match, those who had been on the field, including players and photographers and security stewards remarked on it. There was a fierce energy in the stadium. We were going to will that goddamn ball into the net if it killed us.

The problem with winning through magic is that it always costs a little bit of your soul to get the result. This is why supporters don’t engage in this kind of behaviour every day. Like Faust, we know that the short term gain will cost us, but we nonetheless crave the fulsome experience of a complete victory over our fiercest rivals. This is why we headed out into the rain last night pensive and, if I’m honest, a little wary. Something has been broken and a curse may have been lifted, but that only means there is harder work ahead, and there may well be a price to pay for our souls.