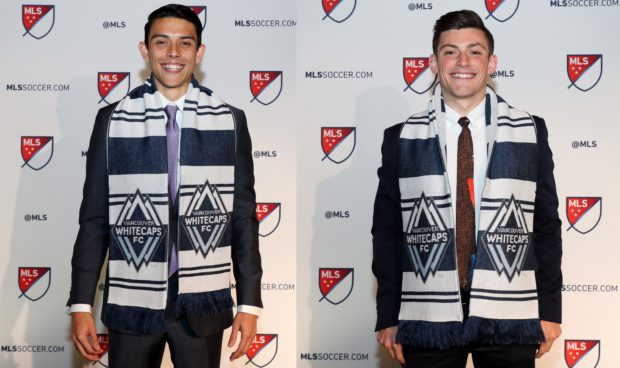 If you were still skeptical around Carl Robinson’s musings about a full blown system and formation change being undertaken with Vancouver Whitecaps this season, Friday’s two SuperDraft picks by the ‘Caps are another indication that change is indeed on the cards.

The Whitecaps selected two attacking full backs, one righty and one lefty, both of whom are very capable it would appear to play as attacking wingbacks in some kind of three at the back formation.

The picks continued the ‘Caps mostly successful strategy of going for defensive players with their first selection. It’s the fifth straight draft that they’ve done so and if either, or both, of Justin Fiddes and Lucas Stauffer turn out to be another Tim Parker or Jake Nerwinski, then the ‘Caps will have struck gold.

“We have [has success with defensive players] and we’ve analysed all the drafts that we’ve had,” Robinson told reporters in a conference call after the draft. “Maybe the defenders aren’t that pleasing on the eye as the forward players or the wide players, and this draft was an example of one or two players that are already dropping down, and that always happens.

“It’s not just one factor that comes into play, it’s a number of factors, and when you get to speak with the guys, first impression in interviews is really important.”

The defensive stock in the draft was high this year. The first three picks were all defenders, with LAFC taking Akron left back João Moutinho at number one and then giving D.C. United $100,000 in both TAM and GAM to get Pacific University right back Tristan Blackmon third overall. Impressive work by the newbies to get two hotly tipped young guns to challenge former Whitecaps Jordan Harvey and Steven Beitashour.

Sandwiched between them was Stanford centre back Tomas Hilliard-Arce, who went to cross city rivals LA Galaxy (remember them?! Remember when they never appeared to care about the draft?!).

Two other defenders went in the top ten, with five trades taking place amongst the first 11 picks, as allocation money was being passed around like it was monopoly money, oh wait…

The ‘Caps were happy to wait, or at least they didn’t want to get involved in splashing the invisible cash.

“We looked at it, but with the consensus going around the place as that we probably would get lucky and find the guys we wanted later on in the draft,” Robinson said. “So we didn’t bother dealing ourselves up and getting involved in that. There were some crazy deals going on and with players dropping as well, that’s why no trade happened. As things worked out, we didn’t get involved in it and we’ve very, very happy with the outcome.”

I’d fancied Blackmon for the ‘Caps. I thought they may trade up for him, but never thought he’d go as high as three. Another right back, Western Michigan’s Brandon Bye was another possible pick for Vancouver, but he went to New England at number eight.

And although the ‘Caps did get a right back with their second pick, their first selection was reserved for a left back, Washington Huskies Justin Fiddes. 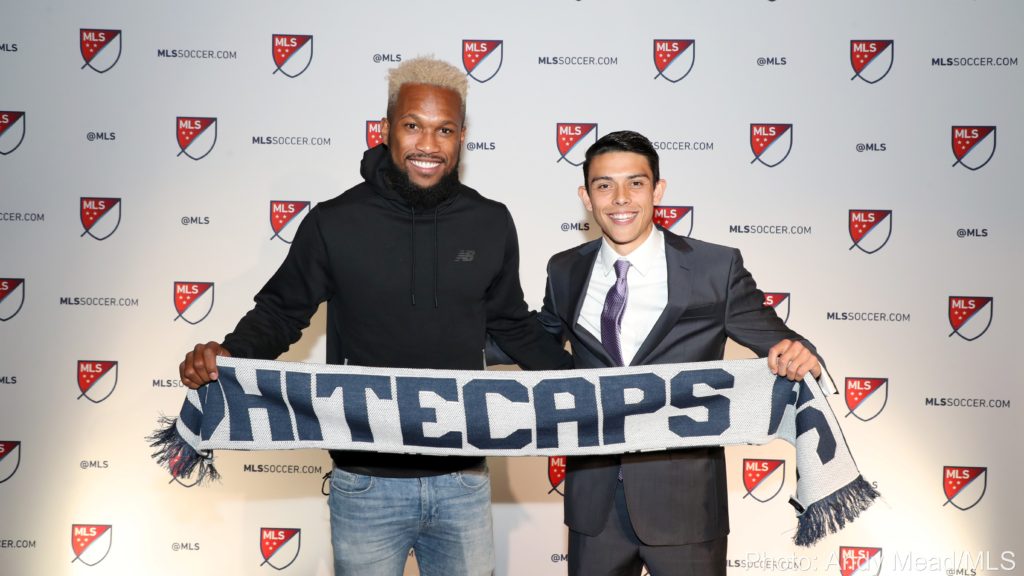 The 22-year-old started 62 of his 70 appearances for the Huskies, contributing one goal and ten assists. Fiddes was the highest rated left back in this year’s draft and Robinson was surprised, but delighted, that he fell to the ‘Caps in the 17th spot.

“Very lucky,” Robinson felt. “I didn’t think he would fall. I thought he was the best fullback in the draft and he was number one for us on our list. As you get to number nine and number ten and you think, can it happen? Then you start getting a few calls and people start talking to you about it and you’re thinking, well, it could be your lucky day.

“What I looked at with Justin, he’s got the talent, he’s very, very quick, and he’s a good size as well. We’ll get coaching him and I think he has all the raw ingredients he needs to be successful. If we can add to what he’s already got, then we’ve got a really, really good player on our hands.”

Defensive ability aside, Fiddes is also fast, recording 3.84 second in the 30 metres dash at the combine and 4.37 second in a 40 yard one at Washington, putting him on a par with starting wide receivers in the NFL. It’s an attribute he definitely feels holds him in good stead for the transition to the pro game and well suited by how the Whitecaps look like they want to play.

“Pace is definitely my strongest suit I would say,” Fiddes told us on the conference call. “I’m looking to bring it into MLS. I know a lot of these teams like to get forward and get high, especially Vancouver with their full backs and their wings back, so I think I can impact the game with my speed.”

And Robinson feels Fiddes will certainly be in the mix pushing for minutes right away this season. He’s not been brought in as a filler or a project.

“He’ll be in with us in preseason,” Robinson added. “He can play right and left back. Having the flexibility to play both is excellent and that’s certainly what he’s got, so it’ll be down to him.

“Brett Levis has not played in a year. The only recognised left back I’ve got is Marcel [de Jong], but depending on the shape I play, the system I play, if Marcel plays as a center back, then we’re looking for that type of player on the left. So it’ll be down to Justin. It’ll be down to him what he does. But I’m really excited to show what he can bring to the table and we’ll get a good look at him in preseason.”

With a left back in place to challenge and push De Jong and Levis, Robinson’s attention then turned to the right side of the park for someone to do the same to Nerwinski. Nine picks later and Creighton University’s Lucas Stauffer was his man. 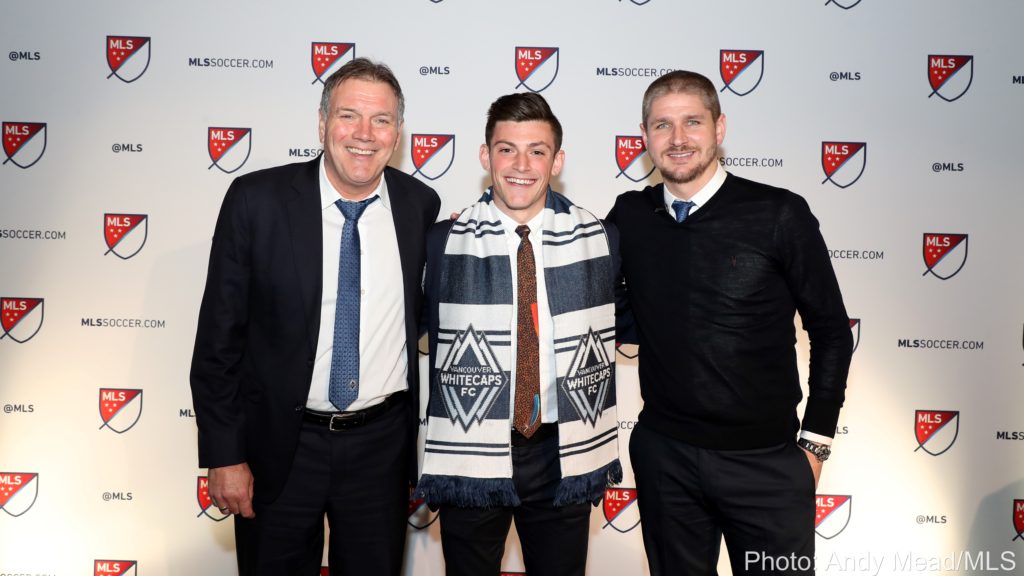 “Lucas, I sat down with him, and he had an unbelievable interview,” Robinson revealed. “He’s engaging, he wanted to learn. He was genuinely on board with what I was trying to say to him and my job and my coaches job is to teach and you’ve got to coach these boys.

Stauffer is another 22-year-old and his college stats certainly show his attacking qualities, with nine goals and 12 assists in his 82 appearances over four years at Creighton. With a wealth of PDL experience and stints over in Europe already under his belt. He could be a bit of a dark horse. That hidden gem Robbo is always looking for, but seldom finds, but coming to a team that likes to play young players is what all these guys in the draft can only have hoped for.

“My main goal is to go into the locker room and hopefully be a part of the team,” Stauffer told us. “I’m excited to work with the guys. It’s just been an all round good experience. In my interview with Robbo, he talked about my incorporation with youth players. He spoke about his time at Wolverhampton Wanderers and related that back to me.

“I think the organization speaks for itself and having young players is a step in the right direction for North American soccer as a whole, and so to be drafted to an organization that prides itself on that is fantastic and I couldn’t be more excited for it.”

I’m genuinely excited to see both of these guys on the pitch this season in a new look Whitecaps system. They seem an ideal fit. Defenders with pace and an attacking mindset. Good at creating. Can they hack it in the pro ranks? Well it’ll certainly be a quick learning curve and Robbo had some advice for both of them.

“The hard work starts now for these two boys, it really does,” Robinson stated. “But I’ve got really good character guys. The interviews tell you a lot and they were both engaging and both wanting to learn, which is what you want from any young player.”

[You can hear Carl Robinson’s comments on the draft and our full conference call chat with Fiddes and Stauffer in AFTN’s latest “There’s Still (Extra) Time” podcast. Subscribe today HERE from only $3.]