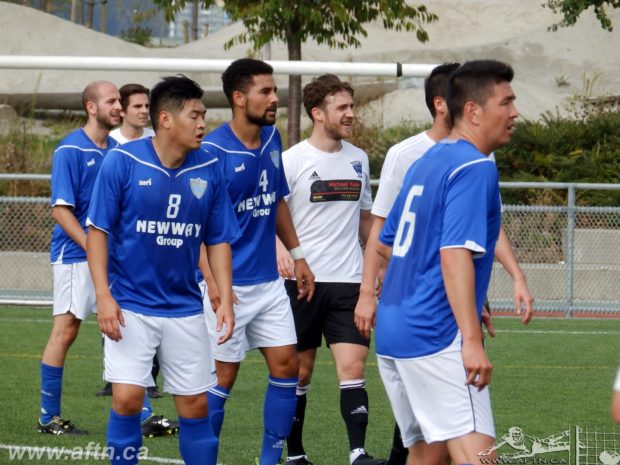 If you’d been told a month ago how the first three weeks of the new Vancouver Metro Soccer League (VMSL) season would have played out, you’d have found some things as you expected and some extremely surprising.

That’s just what we’ve had play out and already the battles in both the Premier and Division 1 are shaping up to be both intriguing and enjoyable propositions as the long season unfolds.

In the Premier Division, seeing last year’s third placed finishers BCT Rovers Tigers United and Imperial Cup winners Pegasus FC unbeaten and leading the way, isn’t too much of a surprise. At the other end, seeing both the promoted teams filling two of the bottom four places doesn’t come as too much of one either.

But you would be forgiven for looking at the table twice after seeing back to back champs Coquitlam Metro Ford Wolves languishing third bottom of the standings, with only one win and two defeats to their name already this month.

What a start to the season it’s been.

The match-up of the weekend took place at Coquitlam Town Centre on Friday night, as old rivals Metro Ford and Pegasus FC squared off once again. Azad Palani scored his third of the season to give the Horsemen a 1-0 victory and keep Pegasus’ unbeaten start to the season in tact, with a seven point haul from their first three matches.

That’s good enough for second place in the standings, two points behind the only team in the Premier to still have a 100% record – BCT Rovers Tigers United.

But Rovers Tigers were made to work hard to keep their perfect start to the season against newcomers Campo Atletico at Newton on Friday night, coming away with a 3-2 victory in the end, after twice fighting back from going a goal behind.

Edson Castro fired Campo ahead but the home side quickly equalised. Ivan Colin restored Campo’s lead from the spot before Rovers Tigers pushed hard, levelling again and then going on to get the win. Cam Hundal, Chetan Jhooty, and the prolific Nick Soolsma (pictured below), with his first of the season, doing the damage for the Surrey side.

An own goal gave Club Inter a 1-0 at EDC Burnaby on Friday night, moving them up to third place in the standings and continuing their good form heading into next week’s nationals in Surrey.

Two goals from Markus Nickol and one from Cathal O’Connor gave West Van their first win, and points, of the season at the only winless side in the Premier, CCB LFC United. While Richmond Hibernian put an end to Westside’s unbeaten start to the season with a 3-0 away win, thanks to a three goal second half blitz from Matteo Serka and a brace from Alan Chivers.

The match of the weekend though took place at Trillium on Saturday afternoon. Croatia SC were the stronger team, but some defensive lapses led to a barn burner of a game away to Rino’s Tigers, before Croatia came through in the end as 5-4 winners.

David Malamura and Emile Saimovici both grabbed a pair of goals for Croatia, with Mark Malamura scoring one. Rino’s had a brace from Whitecaps Residency alumni Declan Rodriguez and single counters from Jakob Lensky and Dylan Dailly but it was to no avail.

And all those results leave the Premier Division standings looking as follows: 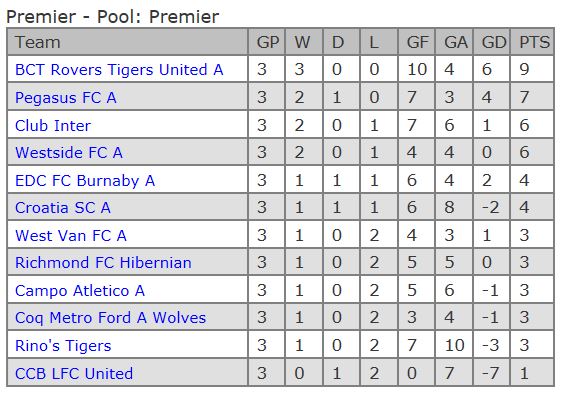 It’s already shaping up to be a cracking season of football ahead. And the same can be said for Division 1, where four sides have 100% records and three teams are still searching for their first points of the new campaign.

Burnaby Metro Athletic continued their strong form after back to back promotions, but were made to work hard for the victory at GN Sporting Club. Amandeep Badyal looked to have given GN the three points after slotting home a penalty, with Metro squandering a chance to equalise with a penalty of their own. With the game deep in stoppage time, the Burnaby side came up huge with goals from Anthony McCullough and Tarogh Sayfaei giving them what looked to be the unlikeliest of victories.

Guildford continue to look impressive as well, coming away with a 2-0 victory at Richmond Royals on Saturday, with Viniel Chand grabbing his fourth of the season and Indervir Gill getting the other.

Those two sides meet at Burnaby Lake on Friday night (9pm kick off) in what should be a cracker.

NVFC Norvan Lions beat GN North Delta 3-2 on Saturday to keep their undefeated start going, but the biggest winners of the top four were ICSF Columbus, who thumped an out of sorts looking Rino’s Fury side 4-0 at Empire.

Columbus were dominant throughout, opening the scoring from Adriano Clemente off a 26th minute corner. That was how it stayed until half time, but the recently relegated Columbus turned it up a notch in the second half with three goals in the last 30 minutes from Matteo Iuele, Steven Deblasio, and Stefano Bortolussi.

We took in the match on Saturday afternoon and are pleased to bring you our first video of the new VMSL season, capturing all four Columbus goals and a couple of other chances and incidents.

That defeat sees Rino’s rooted to the foot of the table, winless and pointless from their first three matches, along with NVFC Norvan Storm and GN North Delta, the latter of which have played a game less. 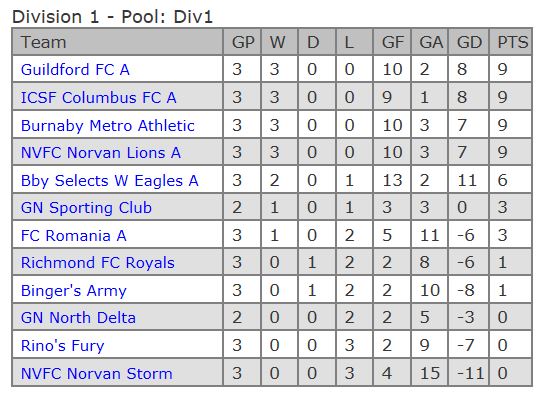 Only one point separates the top five sides in Division 2A, with Bombastic FC and Coquitlam Metro Ford Lupi the only two remaining unbeaten teams, while Rino’s Bulldogs and newly promoted Royal City SC still looking for their first points of the new season.

We took in a bit of the Bulldogs match with 13th Legion on Saturday on the adjacent pitch at Empire to the Columbus-Fury game. 13th Legion were seldom troubled in their 3-0 victory and on that showing, it looks like being a tough season ahead for all three of Rino’s team this year. 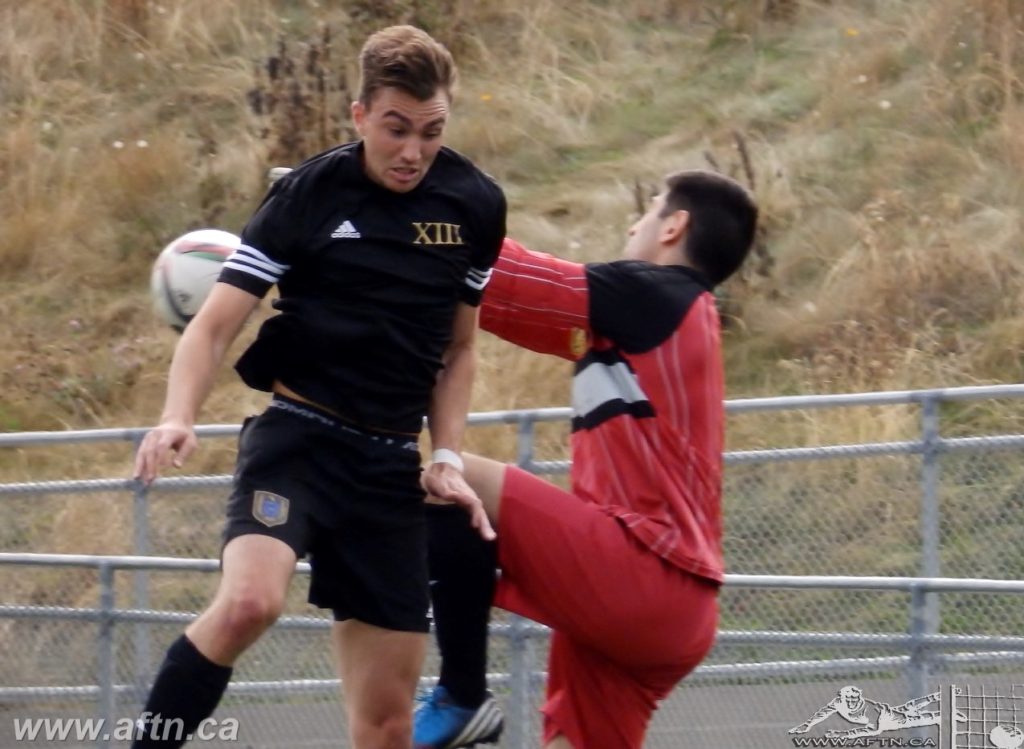 The top three in Division 2B are all unbeaten, with Shaheen FC the only side with a 100% record remaining. They sit top on nine points with Gastown FC and Provincial B Cup champs Vancouver Greencaps two points behind. Twin Arrows are rooted to the bottom in search of their first points.

Westside FC Black Aces and France FC lead the way in Division 3 pools A and B, while Richmond FC Olympics and North Delta United share first place in pool C. The Olympics in particular are in some amazing form, hitting 24 unanswered goals in their three matches so far, with two 9-0 and one 6-0 victories to their name.