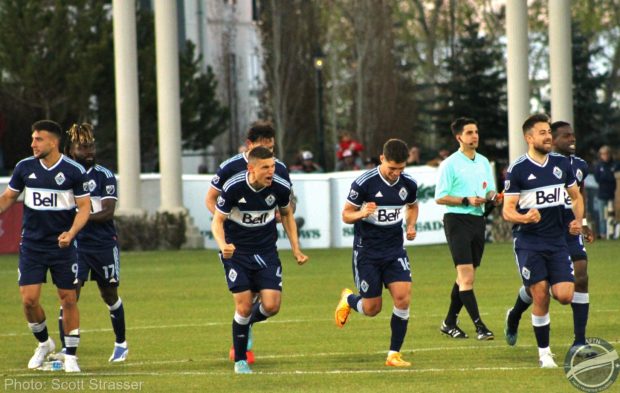 A 5-3 penalty shootout victory ensured the cup-sets of 2019 and 2021 did not happen again for Vancouver Whitecaps on May 25, as the MLS side overcame Cavalry FC in the quarterfinals of the Canadian Championship.

Following a 1-1 draw after 90 minutes, Vancouver scored all five of their spot kicks, while Cavalry managed to score on three of their four attempts.

Having just been able to rejoin with the team the morning of the match after coming out of health and safety protocols, goalkeeper Cody Cropper saved Cavalry’s fourth penalty shot from Ali Musse to put Vancouver in a shoot-to-win situation, and Cristian Gutierrez slotted the ball home on the following shot to win it for the ‘Caps. 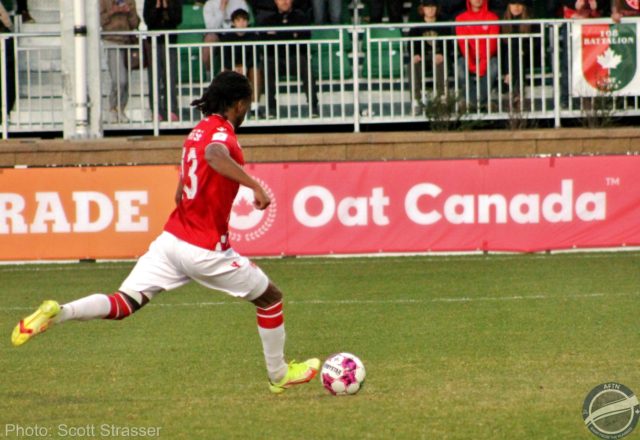 “Honestly, I have to give the credit to the back-room staff for doing their homework on penalties,” said Cropper.

“Statistically speaking, guys go to certain sides, and in this case, we did our homework and [Youssef Dahha], the goalkeeping coach, was on the sidelines and we were working together to try and go the right way each time,” Cropper said. “Fortunately, on the fourth one, I went the right way.”

Head coach Vanni Sartini added that, similarly to before Whitecaps played Valour FC in the previous round of the Canadian Championship, the players practiced spot kicks in the lead-up to the match against Cavalry.

“We actually did the sequence, coming from the centre of the field in order to prepare the guys in the best way,” Sartini said. “The thing is that Cody wasn’t there yesterday for the training session. He joined the team this morning, so probably practiced by himself in the mirror at home.”

In terms of the match itself, Vancouver and Cavalry traded momentum swings throughout the 90 minutes. While Cavalry narrowly edged Vancouver in possession in the first half, the visitors certainly looked the team more likely to score, generating nine shots in the opening 45 minutes compared to Cavalry’s three attempts.

Colombian winger Deiber Caicedo – who enjoyed an energetic evening on Vancouver’s left wing – nearly put the visitors in front in just the fourth minute, looping a header off the top of the crossbar following a cross from Lucas Cavallini. 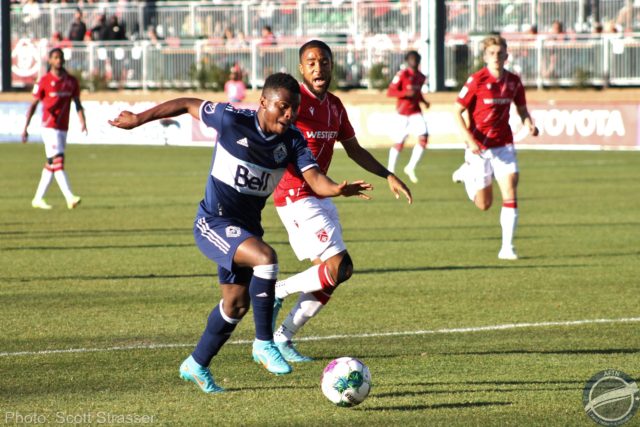 Cavallini had his own chance to break the deadlock with a header in the 11th minute, but his effort was saved by Cavalry ‘keeper Marco Carducci.

Carducci had to come to Cavalry’s rescue yet again in the 39th, blocking a close-range redirect from Ryan Gauld off a lay-off from the left side.

“I think in the first half we actually performed very well,” Sartini said. “We had chances and should have been up in the score. Marco Carducci made a couple of very good saves [for Cavalry].

“In the second half, the game changed. We were almost in confusion in our build-up. We weren’t finding the space and didn’t create any problems for Cavalry until they created a problem for us, scoring that fantastic goal.”

The goal Sartini alluded to was a rocket of a shot from Myer Bevan – his fourth goal for Cavalry and his third of this season’s Canadian Championship – in the 72nd minute. Finding space between two defenders on the left side, the former Vancouver Whitecaps 2 striker struck a shot from 25 yards out that flew into the top corner of Cropper’s goal, clipping the crossbar on its way in. 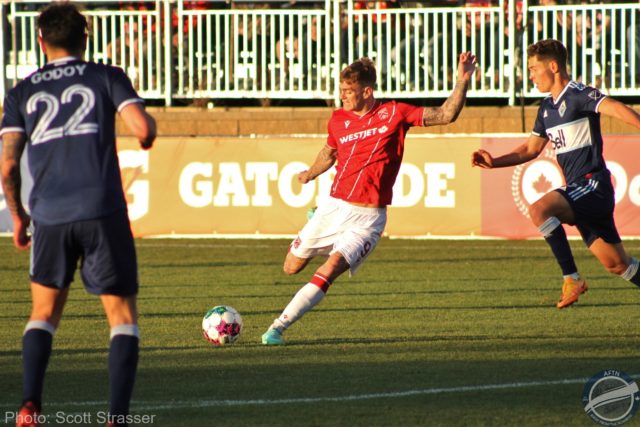 Myer Bevan broke the deadlock in the 72nd minute with this stunning strike into the top corner.

Spruce Meadows was rocking after Bevan’s strike, and with the clock ticking down, it seemed like Cavalry was going to once again claim a win over the Whitecaps, repeating the most famous feat they achieved in the inaugural 2019 season.

But Whitecaps centre back Eric Godoy managed to silence the crowd in the 87th minute, getting on the end of a near-post corner kick from Caicedo and flicking his header past Carducci and into the net to bring Vancouver level.

Sartini said Bevan’s goal had shaken the Whitecaps awake and spurred the team forward to find an equalizer in the remaining minutes. Even before Godoy’s equalizer, Caicedo had come close with a lob over Carducci in the 84th minute, but the ball was cleared off the line by Cavalry centre back Karifa Yao.

“[Cavalry’s goal] woke us up and luckily the goal came in minute 70 instead of minute 85 or 86,” Sartini said.” It woke us up and we had chances again.

“At the end, in the penalties, it could go one way or the other. In the grand scheme of things, we had more chances than them to score so probably deserved to win, but Cavalry put up a fantastic fight. In the end, if they would have won, it would have been deserved.” 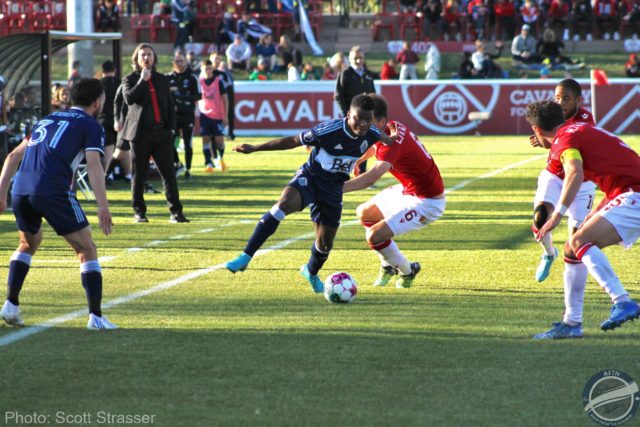 After the match, Cavalry captain Mason Trafford said that even though the hosts lost on penalties, Cavalry’s players could hold their heads high.

“It’s tough to go out on penalties like that but I’m really proud of the boys and the performance,” he said. “I thought after that beautiful goal that Myer scored that we were going through 1-0. Obviously, we were disappointed to concede on a corner kick.

“But we played a good team. There were some quality players out there, and we gave as good as we got. It comes down to those fine margins and unfortunately it wasn’t our day today.”

The ‘Caps will now move on to the semi-finals of the Canadian Championship for the first time since 2018. They will face yet another CPL side in York United, who advanced thanks to their own penalty shootout victory over Pacific FC. 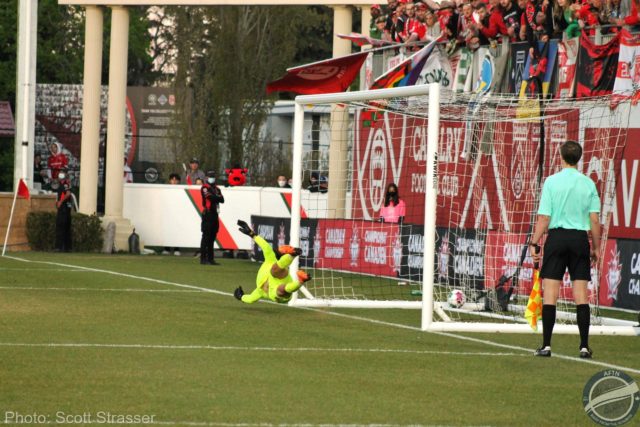 Marco Carducci dives for the ball during the penalty shootout. 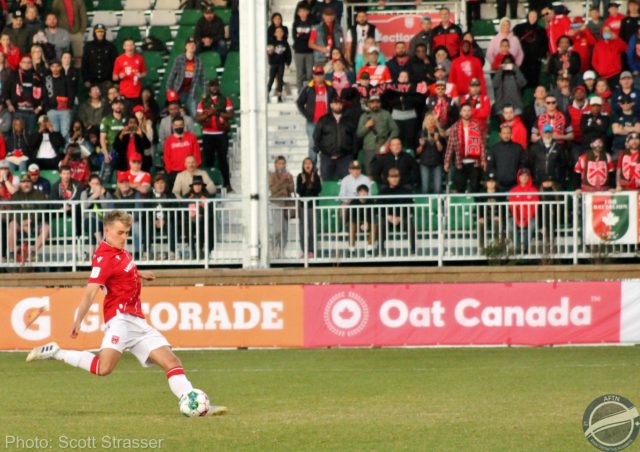 Elliot Simmons scores for Cavalry during the shootout.