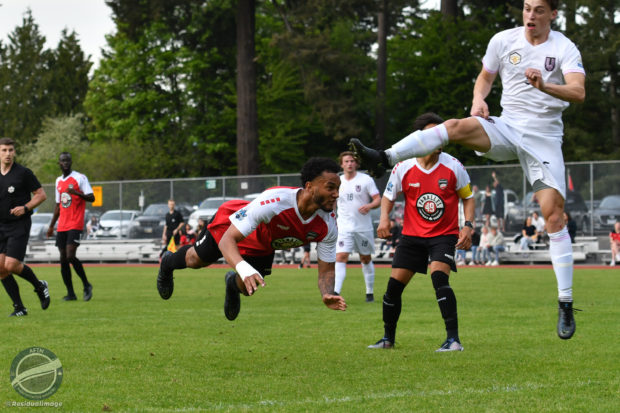 You can’t always read too much into the opening weekend of any league season, especially when it’s a brand new league with six teams playing their first ever matches in it. Teams still have to mesh, chemistry needs to be found after just a few weeks together, and no-one really fully knows what to expect of their opponents.

Sunday may just have been week one of the inaugural League1 BC season, but I think it’s fairly safe to say that we’re going to have one hell of a battle between the seven teams in the men’s division after three draws in the opening weekend action.

We’ll have a much better idea as who will likely be championship contenders by the end of June, but right now, these look like some very evenly matched teams and the first gameday through up some highly entertaining matches, some cracking goals, and red cards in every game. It was a great advert for the league and for what’s to come.

History was made at Ken Woods Field in Vancouver, up at the NSDC complex at UBC, as Vancouver Whitecaps and Victoria Highlanders played the first ever men’s match in L1BC history and what a proverbial tale of two halves this one was, as the two teams battled to a 2-2 draw. 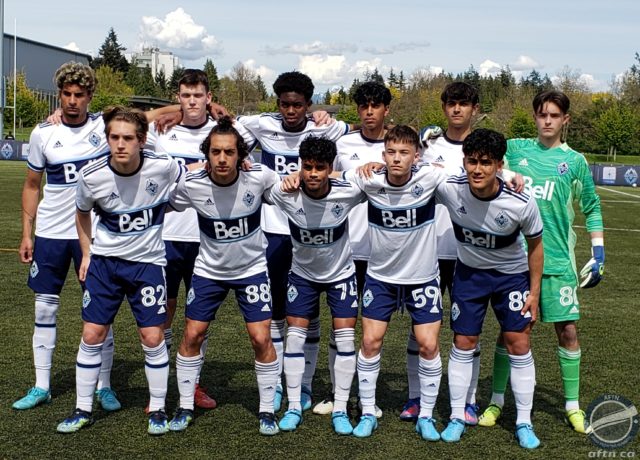 The Highlanders came out strong and took the game to the Whitecaps from the off, opening the scoring 10 minutes in when Javier Sagaste wrote his name in the history books with the first men’s goal in the league, burying a Kensho Ando pass.

The Highlanders doubled their lead when Cody Gysbers fired home a stunning free kick from 35 yards out, that beat Marshall Herald all ends up in the 27th minute.

The Victoria side had chances to add to their tally, with the impressive Hussein Behery running the show and in the thick off all the action, but they had to settle for what at that stage of proceedings looked like a comfortable two goal lead at the half.

Whitecaps head coach Rich Fagan made a couple of offensive changes at half time, and they had an immediate impact, with the home side looking a whole different animal after the restart, dominating the play.

Tomas Pena was pushed more into an attacking position and he reaped the reward in the 51st minute when he pulled one back for Vancouver, burying the rebound after his first effort was blocked by a Highlanders defender.

Pena turned provider in the 74th minute when he sent a dangerous corner into the box, which bounced around a little before Josh Tome buried it to bring the ‘Caps level.

The Whitecaps were in the clear ascendency now and you felt that if any team was no going to push on and grab the winner, it would be them, but their momentum was thwarted in the 76th minute when Joven Mann was sent off for a second yellow and the home side were reduced to ten men.

That brought the Highlanders back into the game and the final ten minutes saw some breathtaking end to end action, but neither side were able to find the winner and had to be content with a point apiece.

“I think with 11 [players] we probably had momentum to go on and get more,” ‘Caps coach Fagan told AFTN after the match. “We had to change things when we went down a man, which to be fair to the boys I think they did a really good job of quickly organising, adjusting.

“Then they even created a few chances down a man, but then if we had not had Joven sent off when he was, I felt we had good momentum and we probably could have got more than a point.”

Fagan was delighted with the way his young ‘Caps side fought back after a sluggish start that saw them two goals down by the half hour mark and being bossed out of the game in phases. A learning point for his team that they overcame well in the second half.

“I think we had some nerves,” Fagan revealed. “Obviously they’re young. They’re 18, there’s maybe one 19-year-old in that group and a 21-year-old. So they’re a young team. I feel that it was just nerves, but I would agree that it was flat. We spoke about it at half time and to their credit, they came out in the second half with a lot more energy, a lot more purpose, more intensity, and that was a big part of how we managed to pull back the two goals.”

Kamloops was the venue as Rivers FC and Altitude FC got their inaugural L1BC seasons off and running in front of a very good crowd of around 700 to 800 at Hillside Stadium. 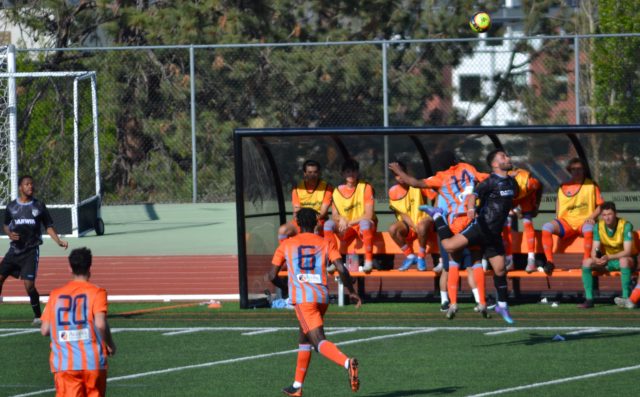 There was drama all the way to the end in this one, with the 10-man home team earning a hard fought point with a stoppage time penalty in a 1-1 draw.

Brandon Bangambee opened the scoring for Altitude in the 45th minute, swivveling to fire home the club’s first ever goal on the stroke of half time from close range, after Tiegen Kyle had headed on a Sairoob Sairoob corner.

Altitude had been the better team in the first 45 minutes, looking lively throughout with their overloading wingbacks causing the Rivers defence a whole host of problems and they easily could have been a couple of goals to the good.

Trailing by one at the half, Rivers’ task was made all the harder when half time sub Aziz Yousef was sent off four minutes after the restart when his very high boot straight into the face of Kosta Adzic drew a straight red card, and the Somalian international could have no complaints.

The game was still in the balance as it headed into stoppage time and the home side were thrown a lifeline when they were awarded a last gasp penalty, which was duly dispatched by Daniel Sagno.

A penalty in the 90+3 secured a point for @goRiversFC men in @League1BC. They did well to stay in the game after having a player sent off in the 49th minute. pic.twitter.com/wAp4WWtP6K

It was a tough one for Altitude to have two points snatched away from them three minutes into stoppage time, but they can take a lot of positives from their first outing, as can Rivers who showed great fighting spirit till the end and didn’t let the game get away from them.

The third and final men’s match of the opening weekend was at Swangard Stadium between TSS Rovers and Unity FC. The teams played out an entertaining affair that saw Unity take the lead late in the first half before immediately being reduced to ten men, TSS tying the game up and pressing hard for the winner in the second half, but the visitors holding firm, forcing both teams to settle for a point in a 1-1 draw.

TSS had shaded the opening 45 minutes but it was Unity who took the lead in spectacular fashion when Sidrit Vukaj curled in a fantastic 20 yard free kick that beat Rovers keeper Justin Sidhu all ends up in the 42nd minute.

Immediately after however, he’s sent off for a red card.

That was to be the last action for Vukaj however, as he picked up a second yellow for his celebrations that saw him kick the corner flag and Unity had to see out the remainder of the match with ten men.

TSS took the game to Unity after the restart and got back on level terms in the 56th minute when Devin O’Hea capitalised on a rebound to tie things up.

The Rovers pushed hard for a winner but couldn’t find another way past Sebastian Colyn and Unity’s solid defensive display and both teams had to settle for a point apiece.

“This is a set piece and transition league, just like the USL,” Rovers head coach Will Cromack told AFTN after their first ever L1BC match. “We talked about it and really I thought we had it under control. Probably could have taken advantage of our chances in the first 20 minutes, where we had complete control, then gave away a silly, unnecessary free kick.

“To be fair, the lad did a really good job. What a wonderful free kick that was and I’ll be honest with you, I don’t think that’s a red card. Not that it ruined the game or made the game, it certainly didn’t make their life any easier, then we had to try and break down a block.

“When you’re not gelled and you don’t have all the ways to figure out how you can break it down, you have to rely on individual brilliance. We got the goal, so we get a point. Probably wanted more out of that one when they go down to ten, but with that said, we didn’t lose, so we’ve started out decently.” 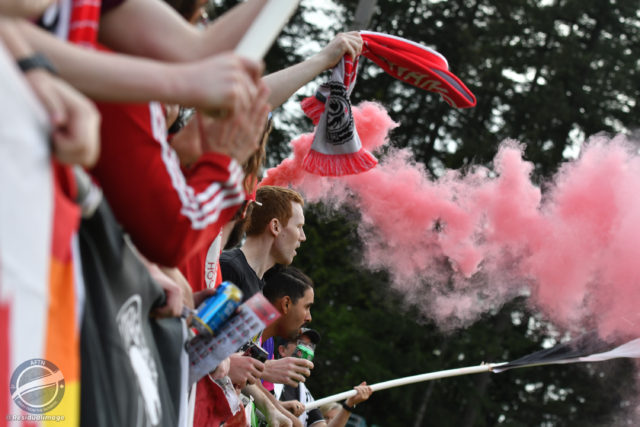 You can see all of our photos from the TSS v Unity match over on our Flickr account.

And catch up on our round-up of the opening weekend in the women’s division HERE.