It was great to see action from the Whitecaps pre-season match up against the LA Galaxy in Arizona yesterday. Just another thing to get us excited about the upcoming season.

Despite the 2-0 loss, it was good to see the highlights from the game and the Caps wearing my preferred all blue strip. It looks smart. The choice of music over the highlights leaves a lot to be desired though. What’s wrong with natural noise?

There were certainly some positives to be taken from the game. We’re creating chances, which is good, and we seem to have a couple of pretty commanding midfield maestros stepping up to the plate. We’re looking pretty assured on the ball in the middle and it was nice to see us stroking the ball about all over the pitch and not just playing aimless long balls.

Some pretty robust tackles out there too. Surprising to see, but nice at the same time.

For anyone who hasn’t seen the action yet, here ya go…

Just over three weeks away and we still have no one that looks like they’ll be doing the business in front of the goal on a regular basis. Starting to get more than just worrying.

Although today’s Countdown To Kickoff video, “Just Imagine” seems to be showcasing our two new strikers. They seem to have problems actually getting the ball into the net as well though.

We should release a spoof version of it. “Just Imagine if we had a goalscorer”

********************
I’m really liking the MLS 101 series on the official Caps website. Great not just for new fans, but also people like myself who have never had that much interest in Major League Soccer and are frankly baffled by the number of seemingly nonsensical rules that they have governing the League.

I personally don’t care if the Caps sign a big name DP or not. As we’ve said countless times before, all we want is the right player to fit the team and drive us on to success. A showy big name may attract some but if that’s what they need to feet off their ass and support the team then that’s not the kind of fans we need.

When the Caps start of an article by saying “No club in Major League Soccer have won a title with a Designated Player in their side” I’m guessing we’re not likely to be seeing on in a Whitecaps jersey any time soon.

No big deal to me and if others think that if we don’t have then we’re a lesser team for it, then it’s up to Teitur and the guys we do have to prove otherwise.

Part of the extended footage video featured John and Pat Titos talking about how their daughter Cyndi used to draw pictures of the players. From what we saw in their scrapbook, these pictures were amazing.

Thanks to AFTN reader and Southsider, SoccerSue, we can now bring you another one of Cyndi’s wonderful pieces of artwork: 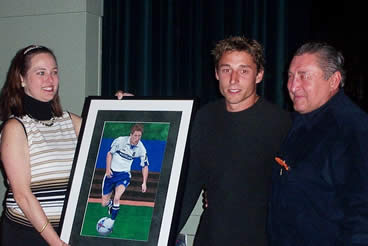 Cyndi and Sue go back to before the 86ers days and this photo shows Cyndi presenting Steve Kindel a picture she did of him at a supporters club awards banquet.

Thanks Sue. Great to see and who knows, we may bring you some more down the line.

A lot of people have been getting behind it and a huge thanks to the Southsiders, especially Piltdownman, for keeping it alive on Twitter.

On Friday, the human cannonball, Joe Cannon himself, tweeted:

@JoeCannon1love : If we can get 10,000 people to tweet it, I would seriously have to consider shooting out of a Cannon!! #shootjoecannonoutofacannon

Fucking awesome!!! That’s the spirit Joe. So you all know what you need to get online and start doing now.

This will happen! We’re even working on a mini site for the whole thing. Unfortunately having a life has gotten in the way, but hey, we’ll work through that!

I’ve had a lot of people get in touch with me since yesterday’s article regarding ticketing problems and I’ll try and cover some of those on the show tonight.

You can listen and watch the live podcast from 7pm PST HERE or listen in to it any time after the event.