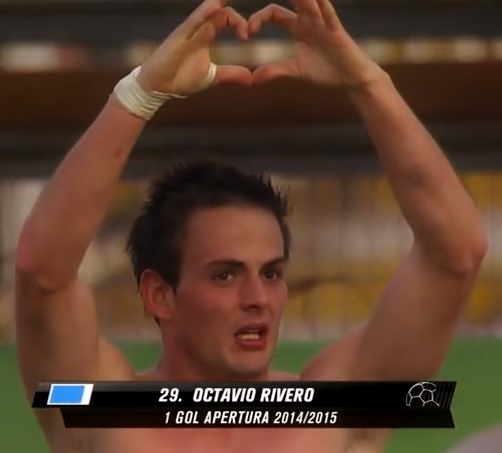 Santa Claus does read our letters!

When we recorded our podcast Christmas special we posed the question, “what would your dream football gift be in your stocking or under the tree this Christmas?”. For many Whitecaps fans, it was a prolific and consistent goalscorer.

Well Mr Claus came up with the goods and delivered Caps fans a shiny, new striker for their Christmas this year, in the shape of 22-year-old Uruguayan Octavio Rivero. As you can see from this photo, the gift came unwrapped!

And what a signing this could prove to be.

Rivero has been playing his football in Chile’s Primera Division with O’Higgins FC for the past six months, where he scored 10 goals in 16 Torneo Apertura appearances and his performances had reportedly been attracting interest from top Chilean sides Colo-Colo and Universidad.

You can see some of what was generating that interest, and what the Whitecaps have added to their squad, in the highlights video below:

The striker came through the youth ranks with Uruguayan club Defensor Sporting before making his pro debut with Central Espanol in the 2012-13 season, scoring three goals in his 18 games. He made another move the following season, joining CA Rentistas, where he notched 10 goals in his 17 appearances for the Montevideo side.

Rivero joins the South American ranks in the Vancouver locker room and comes to the Whitecaps as a young Designated Player, which on current terms would mean a cap hit of $200,000. As always, terms of the deal and transfer fee are currently unknown, but earlier reports out of Chile indicated that the player had a $3 million transfer fee attached to him.

The striker will have at least one familiar face in the ‘Caps dressing room in the shape of fellow Uruguayan Nicolas Mezquida, with the pair playing together for Uruguay’s U17 side in 2009.

Rivero’s signing comes after undergoing a medical in Mexico earlier this week and the striker will arrive in Vancouver next year where he will be officially introduced to the media. For now, he is just delighted at the opportunity the move to the Whitecaps and MLS affords him.

Now, in the clamour for the Whitecaps to add a goalscorer, it will be easy to expect immediate results and pile the pressure on Rivero to perform. He will undoubtedly be expected to hit the ground running and although a new league and playing environment always takes a bit of getting used to, MLS seems to suit South American talent and he has shown that he has what it takes to perform and score in top level leagues.

We’ll soon see and know if that can transfer to MLS with ease.

By getting this signing done early, it will give Rivero a full pre-season to train and settle into his new environment, as well as coming in match fit.

He will no doubt also have to live with constant initial comparisons from some quarters with Camilo, but the ‘Caps look to have added just what was missing to their attack and there could be some more to come soon.

At 6’2″, Rivero is the big target guy that Carl Robinson was crying out for all last season. His highlight video above shows some really nice and composed finishes, along with some headed goals. The partnership he could form with Pedro Morales and Mauro Rosales and the potential damage the three of them could do in MLS next season really is mouthwatering.

The spine of the Whitecaps side for 2015 is looking very promising. With David Ousted in goal, Kendall Waston running the defence and Matias Laba just in from of him in the DM role, that’s a solid defensive core. Add in Morales, Rosales and now Rivero and the attack is looking strong too.

Robinson described the addition of Rivero as being “another piece to the puzzle”, as he continues to build the squad he wants, adding “His skill set fits well with the way we want to play.”

Robbo and his assistant Martyn Pert were recently both in South America on a scouting mission. Robinson was in both Uruguay and Chile and it is believed that Rivero was his number one target from the trip. He got his man.

What other pieces come out of the clubs South American and European scouting trips remain to be seen. Right now, Rivero become Vancouver third DP alongside Morales and Laba, but it has yet to be confirmed whether Laba will retain DP status next season.

If he doesn’t and the Caps can use allocation money to buy his salary down, that would free up another spot for Robinson to fill from his European reconnaissance. Which could be in the shape of another striker or winger. Factor in having another former DP in Rosales and that’s a formidable side for what will be a formidable Western Conference next season.

So well done Santa. Thanks for delivering the goods. Now, about that bike I asked for in 1978….