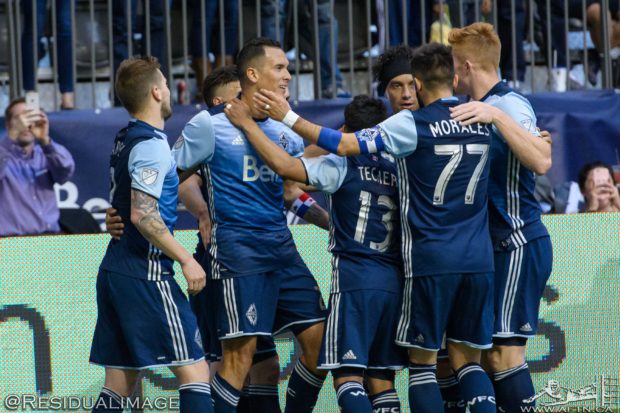 Pedro Morales’ training ground bust-up with David Ousted last month was played down by Vancouver Whitecaps as nothing more than two passionate players fired up by a disappointing season. All very understandable after a tough year that saw the ‘Caps perform well below expectations.

You can read a lot into how things played out before, during, and after the incident, and as such, it really isn’t hard to take the next leap to asking whether it was a sign of something deeper in the Whitecaps locker room and a split between the English speaking players and the large Spanish speaking contingent?

That may seem quite the leap to some, but not if you’ve spent a lot of time around the team this season. One very noticeable trait after training sessions is that the South and Central American players gather in a group as they unwind, speaking Spanish and excluding the others. It’s happened the past three seasons, but what we saw several times as this season limped to its end was it drawing looks and head shakes from other players on occasion.

During Carl Robinson’s first two years in charge in Vancouver, much was made about the Whitecaps having the best locker room atmosphere most players had been a part of. This past season there’s not been a peep around that. Russell Teibert told us a few months back that that was because it now went without saying, but is it more a sign of some disharmony within the squad?

“There might be,” Robinson admitted to AFTN as the season ran down. “In any football club you’ll always have certain cliques. What they do, there’s no difference, it’s similar to what we had last year. Football’s about winning and if you’re winning you tend to brush under the carpet certain things.

At least it isn’t until tensions boil over. 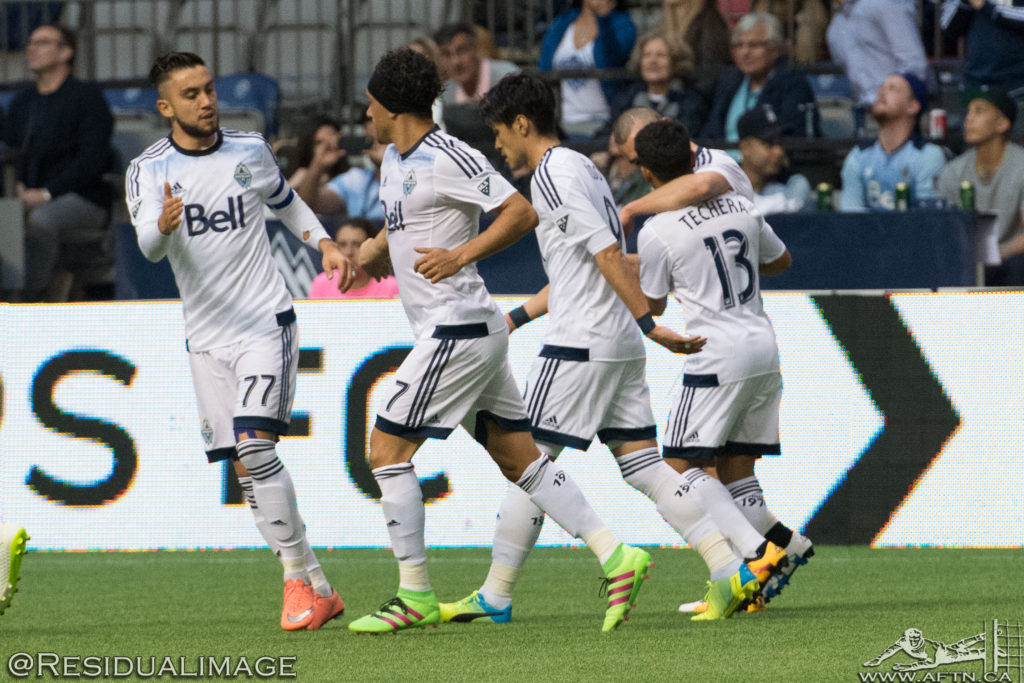 Having such a large number of Spanish speaking players certainly helps with team bonding in some aspects, allowing players fit in to their new surroundings much quicker, but it also raises concerns around communication in general. And we include chatting with the media in that.

There is also the cultural side of it, where Latino players are often said to be less vocal and prefer to do their talking with their feet on the pitch and not their mouths. Morales always came across as such and was never a good choice as club captain.

All of this wasn’t an issue when the Whitecaps were winning, but now that times are tough, the cracks are beginning to show. Robinson doesn’t see that as a reason to move away from his signing of Latino talent too much, but the ability to converse better in English is certainly something that would help prospective signings.

“Is it something that we’ll change? Yeah, maybe,” Robinson mused. “I don’t look at what language players speak when I bring them in. I tend to look at what quality of players we have and what we can bring to the group that we already have.

“We’ve got some fantastic young talented English-speaking North American and Canadian players and we want to try to add to that. I don’t think we got it quite right this year, but we’ll get it right next year.”

Robinson and his assistant Martyn Pert were already back down in South America on a scouting trip, heading to Brazil and then on to Argentina as soon as the Whitecaps season wrapped up. There are also plans to head to Europe, with Robinson mentioning a possible trip to Portugal, but it’s clear that the Whitecaps pursuit of South American and Central American talent remains strong.

It’s been a bit of a mixed bag for Vancouver with their South and Central American signings so far. The likes of Matias Laba and Nicolas Mezquida have done well and will be kept around, but DP Octavio Rivero didn’t fulfil expectations and returned to club soccer in Chile, while ‘Caps Captain Morales looks on his way out.

Jordan Smith was a mixed bag, finally starting to come on to something of a game, but it was too little, too late and he’s rejoined Saprissa in Costa Rica. Then there’s the curious case of Diego Rodriguez. The Uruguayan center back had something of a nightmare time of it in MLS last season, making just four appearances before his loan ended.

Sometimes players are good in their own environment, but MLS is simply not the league for them. That’s something that Robinson acknowledges, but he also needs to learn from it.

Some of the South and Central American talent just hasn’t clicked this year, with Cristian Techera being the main name to jump out, and the task for Robinson and his team now is to get the recruitment right to add players who will stick around the team and MLS for at least a couple of seasons.

“That’s something that I’ve got to look at,” Robinson admitted. “The guys that have come in for two, three years have done very, very well. Sometimes when things don’t work out, and some things haven’t panned out this year, you have to be self-reflective enough, and honest enough, and make changes, and I will be making changes.

“Where I’ll be trying to find my difference makers from, I can’t guarantee one place or the other at the moment, but I’m certainly looking all over Europe. We’re looking in other areas as well to see if we can get a decent deal because we are working within certain parameters, which is why Central and South Americans have come into the equation over the first three years.”

In other words, it’s far cheaper to get talent from there than from Europe, where even the lower league players command salaries too high for the Whitecaps in MLS salary cap land.

Ultimately, Robinson doesn’t particularly care where he finds the players he’s looking for, he’s just keen to find the difference makers the Whitecaps need, particularly in the striker, attacking midfielder, and right back positions. Just as long as Vancouver’s budget allows.

The risk being that spending money does not in any shape or form guarantee success. Three of this year’s MLS Conference finalists would beg to differ of course, but then you have the likes of New York City FC, LA Galaxy, and Orlando City, whose end results this year were so not value for money spent.

Whether the Whitecaps are willing to drop some serious cash on some real difference makers or continue to go with a diamond in the rough policy is what many are waiting to see play out. I think we all know the answer though.

What really matters is that the scouting and recruitment is correct to not only bring in four or five players that will really make a difference to this team, but have the right chemistry and communication skills to bring the whole squad along with them. 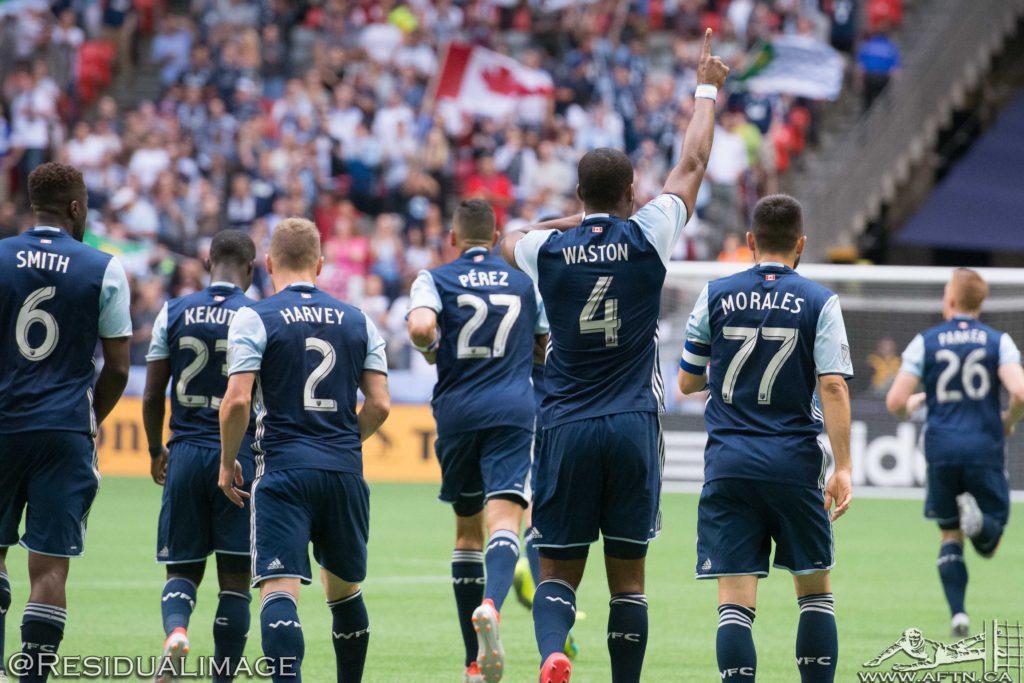