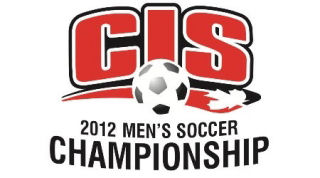 It was the final that fans of palindromes wanted – UBC v CBU – and British Columbia saw more football success thanks to an early first half goal from Steve Johnson.

This was Cape Breton’s first appearance in a Championship game, but they were second best in a match dominated by UBC from kick off.

When Steve Johnson hit home the opening goal in the 8th minute, it didn’t seem that that would be the match winner, but so it proved.

Brandon Bonifacio and Reynold Stewart had chances to add to the Tbirds lead in the first half but an off target shot and a deflection put paid to that.

CBU seemed to adopt a ‘if you can’t beat them at football, try and kick them off the park’ approach in the second half and they were simply outclassed on the day.

Stewart and Paul Clerc had shots saved as UBC tried to increase their lead, but it was a pretty flat second half and the Thunderbirds ran out pretty easy winners.

The CIS Mens Soccer Championships began in 1973. Finals week features eight teams from the 45 that compete over the season in the four Conferences.

UBC Thunderbirds were already the most successful side in the Championship’s 41 year history and today’s 12th win adds to that. Victoria Vikes have also brought Championship success to the province five times, including last year.

UBC feature Whitecaps PDL players Gagandeep Dosanjh and Reynold Stewart and both of them were instrumental all-season long in the Thunderbird’s run to the Cup.

Dosanjh was captain of the Whitecaps U23 side last season and he continued that leading by example with the Thunderbirds, netting 13 goals and 10 assists in 16 regular season games. Stewart chipped in with four goals and six assists in his 15 games, only eight of which he started.

They were both dominant in Finals week, and the pair were responsible for all three goals in the Tbirds 3-0 semi final success over hosts Laval on Friday.

Dosanjh was named the MVP for the CIS Championship week, making the All-Star team alongside Stewart and four other of their Thunderbird team-mates.

With UBC’s success and the SFU Clan still in NCAA Division 2 Championship reckoning, this is a great time for university football in Vancouver.

Let’s just hope that the Whitecaps are keeping a very close eye on their prospects and their team-mates, and we’ll see a few more of these guys in a Whitecaps strip soon.