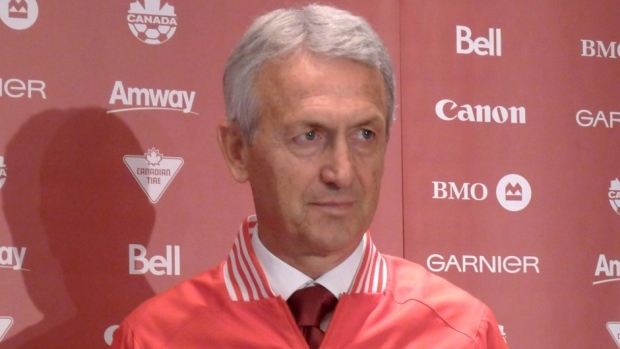 Looking at Canada’s 24 man squad for the current camp and two friendlies in Austria, it’s fair to say it’s not exactly packed with household names.

It brings to mind the old joke that the guys in it aren’t even household names in their own house.

Of course, if we’re being brutally honest, even if Canadian head coach Benito Floro did have his first choice, full strength squad at his disposal, there are many in Canada who still wouldn’t know who they are.

That sadly is just how it is for Canadian football these days.

A lot of that comes down to the fact that there isn’t a plethora of the current young crop of Canadians who are first team regulars for their sides. It hampers their development and it hampers the national team, a point which Floro rued over during a media conference call this morning.

“Only three or so are playing in a good team,” Floro told us. “The second group is playing in the second division or third division but it is our situation. We cannot stop that. For that, the camps are very important for us because we need to improve the level about our system but it is a handicap. That is true.”

At least the recent Canadian Championship semi finals provided some valuable competitive minutes for a host of Canadians. Not many of them have made it into this squad, and some are with the U20 camp, but it does give some hope for the future.

Minimal minutes, but Floro is happy to see the players get them and just wishes that there was more.

“The first round was nice because we saw several players in good condition but we need more games to study from because we need to have a good group.”

One of the players missing is Vancouver Whitecaps’ Russell Teibert. The 21-year-old captained the Caps’ in the recent Voyageurs Cup games and there has been rumours that Floro was none too happy with Teibert’s attitude at a camp last year.

This time, at least, the reason for Teibert’s absence can be simply explained by the fact that Vancouver need him to play against Seattle this coming Saturday. That also explains some of the other absences.

Canada will play two matches in Austria, against Bulgaria on Thursday and Moldova next Tuesday.

Can Canadian fans expect to take much from either of the games?

“This camp is only for players in Europe with two or three players from MLS or from Canada,” Floro explained on the conference call.

“The objective is the same for every camp: to prepare players on our system of play because we need to improve our level in attack and defence. At the same time, we want to take the young players because the experienced players are good at teaching them how to work as an individual and in a collective.”

Bulgaria and Moldova may not be exciting opponents in the grand scheme of things, but they will give this young Canadian squad a couple of good, and very different, tests.

“We realize it is very difficult because the level of Bulgaria is better than our level. For us, the most important question is to play well and play as if it was an official game.

“Moldova will be another situation but we need to win because it is very important for us to improve our psychology and mentality. For us, there are two games that are very important.”

It’s all about the building process ahead of the next round of Gold Cup, Olympic qualifiers and World Cup qualifiers. Some of those may feel a liftetime away right now, but keep a core group together for a number of years, and blooding them young, is a method worth continuing pursuing.

And of course, there is also the little carrot of a possible spot at the Copa America when it is held in the US in 2016.

“We’ve planned in three stages,” Floro commented when asked about the tournament. “The first is finishing now, with this camp and the second is to prepare the team for the Gold Cup and we’re always thinking about doing a good job at the Gold Cup and trying to get to the finals.

“After that, if there’s the possibility to appear and qualify for the new American Cup it will be better for us because we could play a lot of official games which is better for us to improve our level.”

With Canada currently sitting 111th in the last FIFA World Rankings (up one spot!), then anything that can improve that level is worth pursuing indeed.