The Whitecaps Residency kicked off their 2011 USL PDL season with a 2-0 loss to Kitsap Pumas at Empire Field on Sunday afternoon.

You can see our photos from the game HERE.

The match was open to the public and free to attend, but only a sparse crowd of around 50 people came out to see the match on a glorious Sunday afternoon. Those that did turn up won’t have left taking too much from the match from a Caps perspective but certainly shouldn’t have been downheartened. 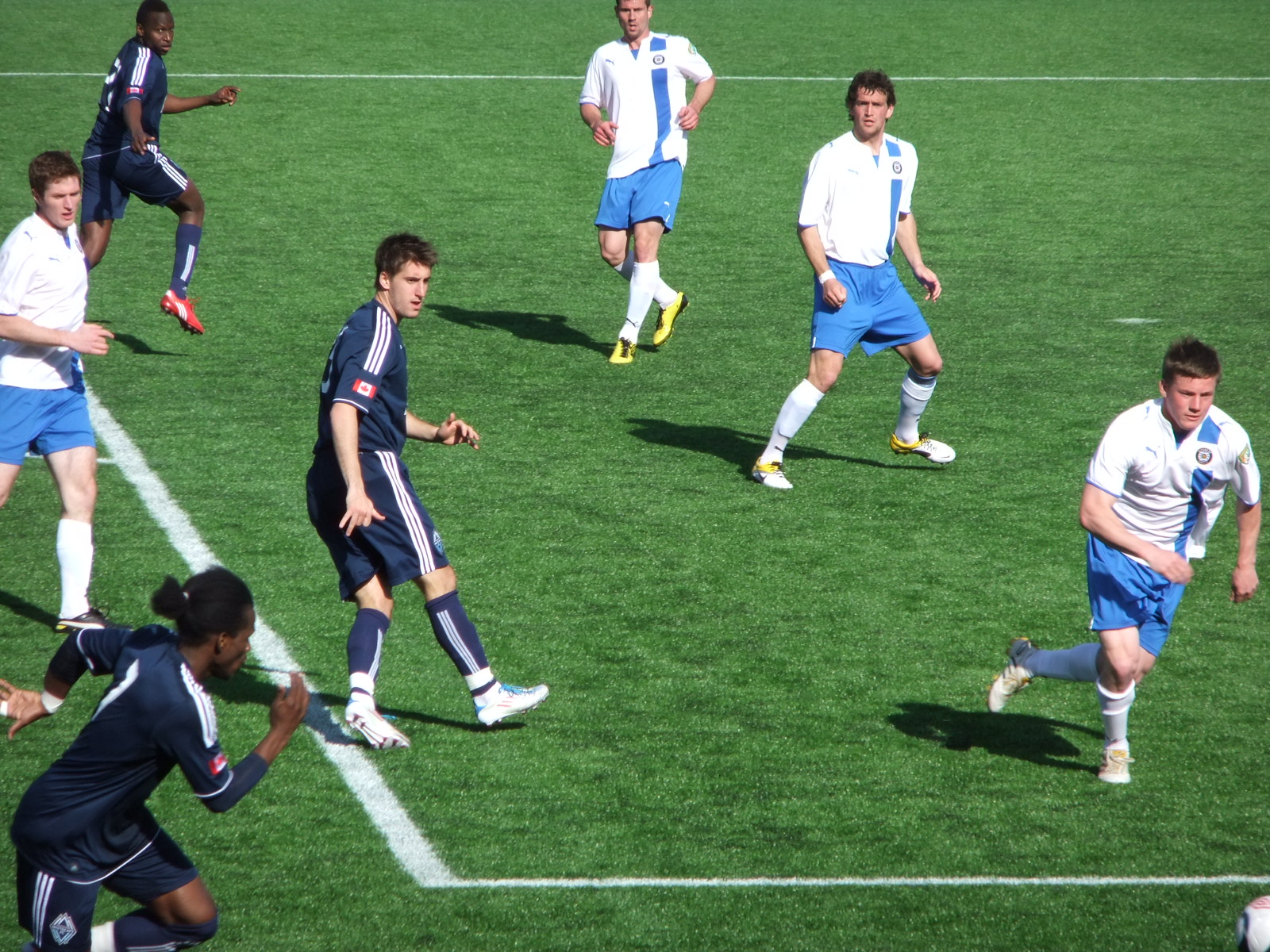 I have to admit that it was the first PDL match I’ve attended over the years, but I’ll certainly be back for more. There’s not much better ways of spending a lazy Sunday afternoon that watching some live football.

The USL Professional Development League is the top under 23 League in North America and features 64 teams across the US and Canada. There are four conferences, of which Vancouver are in the Northwest Division and finished sixth last season.

Although primarily for under 23 players, you can play older guys and the Kitsap Pumas 22 man squad featured seven players over the age of 23 and none in their teens. The Caps were all 23 and under, with 20 of the squad in their teens – a testament to the Whitecaps excellent investment in the future.

So it wasn’t quite a case of men against boys, but close.

For those most used to the MLS Caps, you may be surprised to see Alex Morfaw and Philippe Davies there. Those that followed the D2 Caps will also recognise the names of Cornelius Stewart and Doudou Toure.

And therein lies the whole premise of the PDL from a Caps point of view. It’s not about winning the whole League or even the Conference or individual games, the Whitecaps are using these games to take a look at guys and develop them.

When you see the impact a former residency player like Russell Teibert has made in MLS, you can see just how important this is to the Whitecaps. You’re not going to find players like Teibert every season, but there are certainly a few guys that we can have high hopes for.

Canadian international Bryce Alderson is one of them and he was one of the strongest on show on Sunday, looking very composed in the middle of the park. 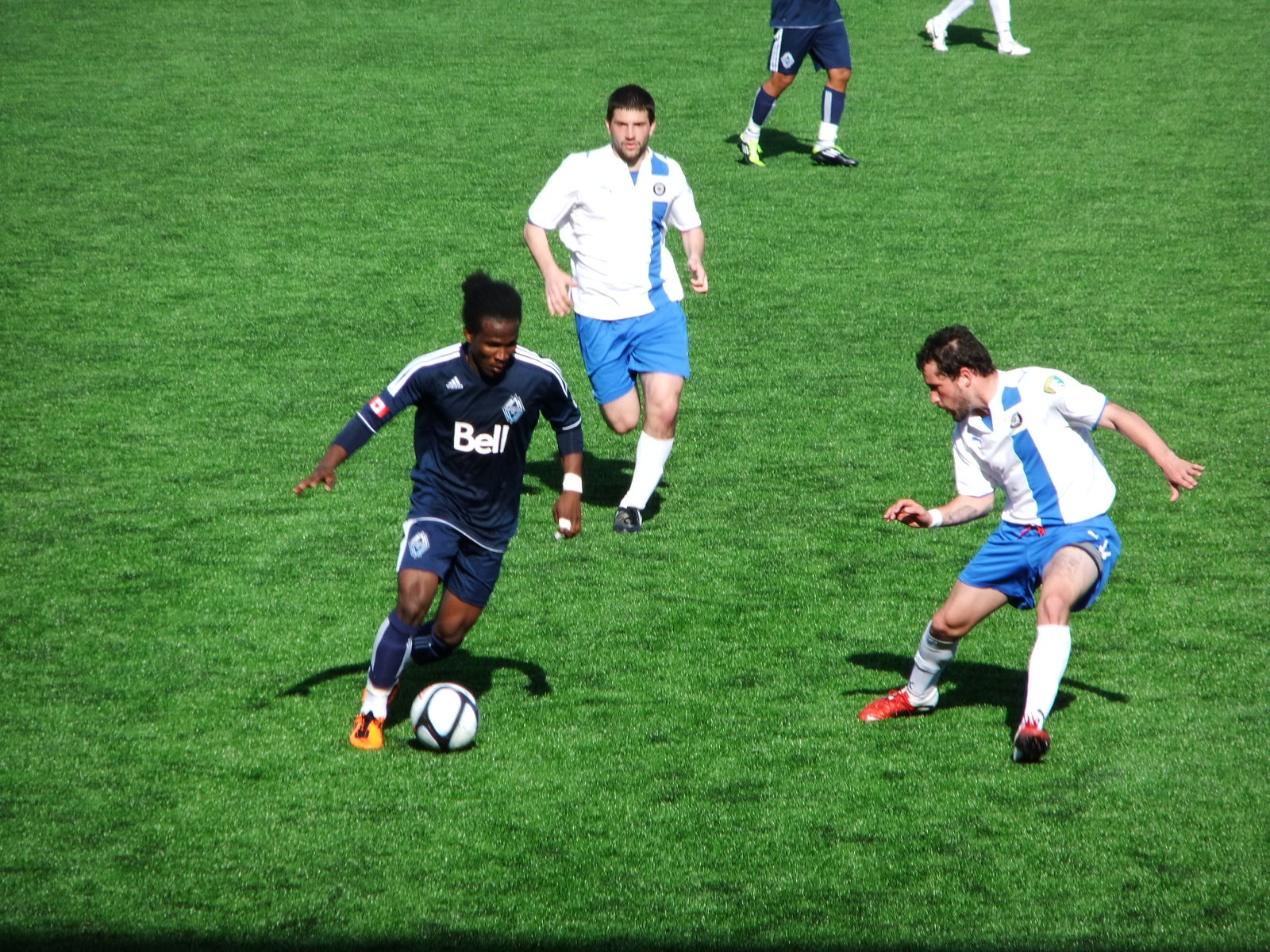 Philippe Davies had an awful first half for a player of his standard, but was the machine that most of the play went through in the second. I think the jury has to be still out on him.

Alex Morfaw was by far the best Whitecaps in the first half and looked a class above the rest out there, which he is. He faded in the second, understandable after he is coming back from his wrist injury and hasn’t played much. He does seem to get bundled off the ball a bit too easily at times.

Many with have a sentimental place for Cornelius Stewart, but to be frank, if he can’t shine and have an impact in PDL, he’ll not find a place in the Caps MLS plans.

Kitsap dominated a lot of the game and it was only really in the second half that the Whitecaps started to boss spells of the game. Like their more illustrious team-mates though, they had trouble finding the net.

A few of the younger players looked a little lost out there at times and needed a lot of direction around where to be and where to go. This is the only way these guys will fully learn and develop in some cases. The 17 to 19 age is a key time for many players as to whether they can forge out a career in the sport. At so many Clubs all over the world, players hearts are broken when they’re told they’re just not good enough.

Football is a harsh sport for kids and their dreams. There’s no point pussyfooting around it. Some of the guys on display on Sunday will never make it to D2 level even.

That’s why it’s important to see what they can do and for the players to take their chance.

I’m certainly looking forward to seeing how they develop over the course of the season. You should too.

Get along and support the future. Who knows where you’ll be seeing some of these guys in a few years time.