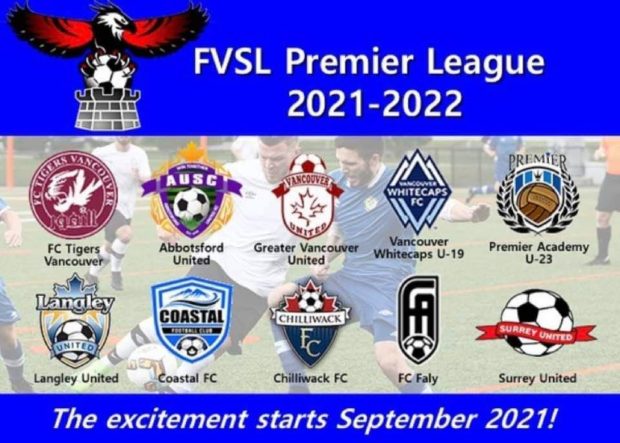 Can you feel it? Football is almost back to normal in the Lower Mainland and with that comes the anticipation of a new Fraser Valley Soccer League campaign just ahead. After the most challenging of times, the FVSL is excited to welcome back all of its member clubs and teams for the upcoming season, kicking off in September. Before we do that, though, we would like to take a moment to thank all of the essential front-line workers who helped us all get through this pandemic to the best of our ability.

We will have more details as the season approaches. However, see below for information on each of the FVSL’s top flight sides and their current preparations for the season. We look forward to seeing everyone back on the pitch soon and best of luck to the teams currently competing in the FVSL’s abbreviated Spring Season.

It’s great to be back!

The current holders of both the Fraser Valley Soccer League Premier Division title and the Pakenham Cup are gearing up to try and keep their trophy cabinet fully stocked. Led by head coach Alan Alderson and manager Mike Leclerc, United will hope that they can continue to lean on their strong connection with the University of the Fraser Valley to ensure they remain top dogs in the FVSL.

After returning to the FVSL’s top flight following their runaway Division 1 championship run in 2019/20, Chilliwack will be looking forward to making a proper reintroduction to the Premier Division. The handful of games they were able to play under the Return to Play protocol in the fall of 2020 have only whet their appetite for more and, with the chance for a proper pre-season this summer, you can bet they will be raring to go come September.

While it was a very small sample size under unique conditions, Coastal FC demonstrated once more during the few FVSL Premier Division matches played in 2020 why they have earned the mantle of “perennial contenders”. Led by Corrado Lenzi and overseen by Program Manager Steven Duffy, Coastal will be aiming to reclaim their Premier Division title as well as any other trophies they can lay their hands on in 2021/22.

One of the new additions to the Fraser Valley Premier Division is FC Faly. They are led by former French youth international Faly Basse and their presence in the Lower Mainland has grown significantly since their founding. Their flagship team has won the BC Soccer Doug Day Men’s U21 Provincial Championship as well as the Vancouver Metro Soccer League U21 league title. Most recently FC Faly competed in the VMSL Division 1 during the abbreviated 2020/21 season.

Also join the FVSL Premier Division for the upcoming season, the league is excited to welcome FC Tigers Vancouver. As part of partnerships with other Lower Mainland soccer clubs, FC Tigers won the Vancouver Metro Soccer League’s Imperial Cup, the Vancouver Metro Soccer League Premier Division title and reached the final of the BC Soccer Men’s Provincial A Cup. FC Tigers are spearheaded by Dr. Mohammad Abu Aish and coached by former Charlton Athletic and AFC Bournemouth player Adam Day, who has obtained the prestigious UEFA A-License certification. Now entirely self-managing, FC Tigers will be hoping to carry their past successes into their newest endeavor as part of the FVSL.

Returning for their fourth season in the Fraser Valley’s top division, Greater Vancouver United will be looking to continue the growth they have experienced over past seasons. The club, first established in 1988 and currently overseen by manager Bhav Chauhan, remains a pillar of Surrey’s Indian community and will hope to take another step forward in building their FVSL reputation this season.

One of the Fraser Valley’s most storied franchises, Langley United will be ready welcome the FVSL Premier Division’s newest additions with open arms, as well as perhaps a stiff challenge or two! Led by former BC Provincial Cup Champion Azad Palani, Langley will be looking to blend their veteran experience with the right amount of youthful exuberance as they seek more silverware to add to their long trophy list.

Another new addition to the FVSL Premier Division for 2021/22 is Premier Academy U-23. Based in Port Coquitlam, Premier Academy are coached by Shawn Agnew, who is an alumni of Trinity Western University’s illustrious soccer program, trained and played in Portugal and Brazil, and holds USSF coaching certifications. While focusing on the development of younger players, Premier Academy will be hoping that a handful of senior players with semi-professional experience will be able to guide those younger players while also making Premier Academy a force to be reckoned with in the FVSL.

For more information on Premier Academy U-23 visit: https://www.premieresocceracademy.ca/home/teams

Three-time BC Soccer Provincial Cup Champions Surrey United have made some changes to their men’s program for the upcoming campaign. Surrey have welcomed in former FVSL Premier Division side Sullivan Athletic Football Club Red Bulls, along with manager Brock Dybhavn. United will continued to be coached by Rob Wilson and the club is looking forward to this new chapter in their illustrious history.

Rounding out the new additions to the Fraser Valley Soccer League Premier Division are Vancouver Whitecaps U-19. The Whitecaps are synonymous with soccer at the highest level in the Lower Mainland and the FVSL is looking forward to being the platform where the stars of tomorrow get their chance to shine today. Whitecaps U-19 are led by Head Coach Nick Dasovic who is a former Canadian Senior International and played professionally with Dinamo Zagreb in Croatia, St. Johnstone in Scotland and Montreal Impact and Vancouver Whitecaps in Canada, among others.

For more information on Vancouver Whitecaps U-19 visit: https://www.whitecapsfc.com/