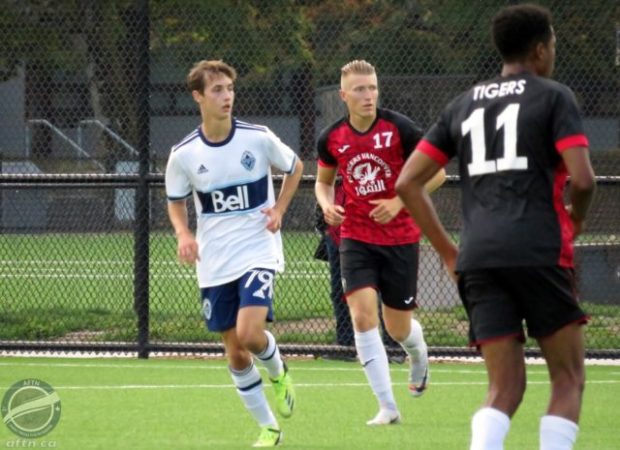 The teams are already old foes after a series of matches this summer, the latest of which came last weekend, which saw a Farivar Torabi hat-trick lead the Tigers to a 4-1 come from behind victory in the Soccer City League Cup, after Tomas Pena had fired the Whitecaps into an early lead.

The @WhitecapsFC U19s kick off their @FVSL1 Premier Division campaign at UBC on Saturday night with title favourites @FCTigersSoccer the visitors (6pm ko). The teams met last weekend in cup action, with Tigers 4-1 winners thanks to a Farivar Torabi hattrick. Here's his third goal pic.twitter.com/YUPwnlSjRM

That was the Whitecaps’ third cup game to start off the new FVSL season and after a pair of comfortable high scoring victories against academy sides, the Tigers test will be a good wake up call for the young ‘Caps that it’s not going to be a series of rollovers in the league this season.

Tigers and Abbotsford United make up the favoured trio with the Whitecaps that are expected to be battling for the FVSL title, both of whom have a higher average age of player than the other teams in the league.

The Whitecaps started off their season with a 9-0 victory over Premier FC at Cloverdale on September 11th.

Christopher Album (main picture above) opened the scoring in the 20th minute, with Alesandro Comita making it 2-0 three minutes later. Album added a second in the 29th minute and William Antoniuk gave the Whitecaps a four goal lead by half time when he fired home in the 34th minute.

Album completed his hat-trick five minutes after the restart, with Antoniuk making it 6-0 in the 54th minute. That sixth goal also saw the Premier goalkeeper sent off for a foul in the build up, and they played the rest of the match with ten men.

A strong start to the season and you can see the whole match in the video below.

The following Saturday, FC Faly were dispatched 4-0 at UBC thanks to another Christopher Album hat-trick and a goal from Tomas Pena.

The Whitecaps have joined the FVSL for this season after the USSDA ended operations last year and the pandemic saw the choice made that the new MLS Next set up was not an option for the ‘Caps group at this time.

But those early results have made some question just how much competition and development that the young ‘Caps will get this season in the league and whether it’s the best preparation for the club’s young talent looking to make a move up to the MLS roster.

While there is a lot to question, it should be noted that in seasons past the Whitecaps U17s and U19s regularly handed out multi-goal trouncings to a number of sides in the USSDA that were clearly not at the same competitive level. You’ll certainly see that the in the FVSL this season, but Whitecaps Sporting Director Axel Schuster still feels that in the current climate, the league is the ideal landing spot for the U19s at this point in time.

“For this year, everything is a little bit more complicated,” Schuster told AFTN. “A lot of leagues haven’t really played and teams were struggling with the Covid restrictions, and we also had to respect all of them. So it’s not the only league and competition that we want to participate in.

“We are up to play with our U19 team in the future BC1 League and I think that will be a much higher competition and a much higher level. And also much more of a challenge for our young guys to play in that league.”

With a shake up of the youth system, many MLS sides no longer have U19 teams, but with a new MLS reserve league coming next season for U23 teams, Schuster feels that having a team at that level is a necessary bridge and a huge asset to the Whitecaps.

“We have decided to have U19 for various reasons,” Schuster told us. “The same way we have decided to have a U16 team. They are not teams that you are mandated to have. MLS only ask to participate in U15 and U17 and the new U23. We think it is very important to have other groups, because the steps are so big.

“So the same as our U16 is the next U17, which is a very important team, and the U19 is a pool of players that are not just ready to play in U23, but need minutes and maybe some late developers or just some guys that are still very young and just coming out of the U17, because the step between U17 and U23 is very big.

“If you look at the results now, some players played in the team right now that are probably later U23 players, but because the U23 right now is not playing, those players play in the U19 to get minutes, so I don’t think this is the final group of the U19 that competes in those leagues. Maybe now, some of the competition is not strong enough to really challenge our guys, but in a Covid year, with all the problems we have, we are lucky and happy to have any form of competition.”