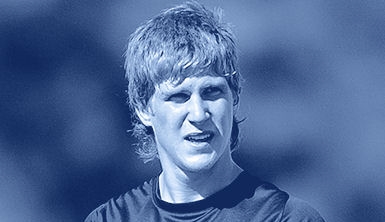 The addition of Rodriguez brings the Whitecaps’ current South American contingent to six, but looks to signal the end of two other centrebacks in the process – veteran central defender Andy O’Brien and Honduran Johnny Leveron.

Vancouver’s defence was one of their strengths last season, with the team leading the way in MLS with 13 clean sheets. The Whitecaps will now move into the new season with a new, and obviously so far untried and untested, central defensive pairing of Rodriguez and Kendall Waston.

Two potential beasts at the back for the ‘Caps, and how quickly they find their feet together will be a major key to Vancouver’s success early in the season, with head coach Carl Robinson indicating there are more new faces to comes.

Rodriguez comes to Vancouver as an unknown quantity. He spent three years with La Liga side Malaga, making 42 appearances for their reserve side and scoring five goals, before returning to play with Uruguayan Primera Division side Juventud last season.

He’s not exactly a household name in Uruguay, never mind Canada, but his highlight video (which we’ll put at the end of this article), experience and his obvious skillset certainly seems to indicate that he has what it takes to be a success in MLS. The proof will come on the pitch of course.

Robinson identified Rodriguez on his scouting trip to South America in December and watched the defender play and train on three separate occasions and feel he will fit right in with the ‘Caps style of play.

“Excellent signing for us,” Robinson told reporters on a conference call on Wednesday afternoon. “Got experience of going to Europe. He was over there for two years with Malaga. Manuel Pellegrini had recruited him. He had the background, he had the potential, without playing any games for their senior team.

“One of the hardest positions to find is a central defender who nowadays enjoys defending and he’s got a huge upside in him being so young.”

Although he feels Rodriguez still has work to do in his game, Robinson liked what he saw and what he can bring to the Whitecaps.

“He’s a good talker and has got a presence with him as well,” Robinson added. “The fundamentals you want any player to have and to do, he does very well. His footwork is excellent, his strength and his dropping. He’s a defender, He loves clearing balls and he loves putting himself in situations to block the ball from going into the goal.”

But what of those weaknesses?

“He should have more attacking attributes than he’s got,” Robinson noted. “One of my observations was that he probably should score more goals. In one of the games that I watched, he probably should have scored four goals from set pieces. He will bring an element of aggression in the opposition box as well as Kendall and Octavio. It’s something we need to improve on as we haven’t been good at set pieces for a long time now and we’ll try and address that.”

Robinson has often talked about bringing in players with the correct character and the right mentality and he feels he’s found another such player in Rodriguez, highlighted by their first chat together.

“He wants to learn,” Robinson said of Rodriguez’s desire to improve. “One of the first questions when I sat down with him that he aimed at me was “how can you make me better?”. From a manager’s point of view, that’s actually refreshing to hear. A player is asking you the question as to how you can make him better and what can you do to let him progress to the next level. He’s got the right mentality and mentality in this game is a major thing.”

So all in all, it looks like a good addition for the Whitecaps. But there are some concerns, aside from establishing an immediate chemistry with Waston.

As we mentioned, the Whitecaps defence last season was strong, solid and stingy. It was also quite unsettled in the centre, as it has been for the past few years. Robinson will be hoping that will come to something of an end now, with Waston and Rodriguez marshalling the middle of the box moving forward.

We know that Waston is going to pick up at least a couple of suspensions over the season and could also be missing on international duty. Let’s not even look at any possible injury jinx hitting that spot yet again.

There will be changes in the backline as the season progresses due to the sheer volume of games as well in MLS, Champions League and Canadian Championship action.

As things currently stand, the Whitecaps are heading into training camp next weekend with just three signed centrebacks, with Christian Dean making up the trio. O’Brien and Leveron were both taking up international spots and last season took home $371,187 between them.

Veteran O’Brien took home the bulk of that on $280,000 and we’re led to believe that the Caps offered him the chance to return to Vancouver this season on around half of that.

Whilst O’Brien loved being with the ‘Caps and was prepared to take some kind of cut, the feeling was that this was just too much of a reduction for him to consider and it looks pretty certain that the former Irish international won’t be back.

“Over the last few weeks, we’ve had very, very good discussions with Andy but we’ve been unable to come to an agreement,” Robinson sadly admitted. “We’re probably going to be moving in a different direction now and Andy’s exploring things over in Europe at the moment.

“After having discussions with Andy and his agent on a number of occasions, there was some very good talk. We have to be a club that moves forward at some time and the time is probably now for us. Unfortunately we haven’t come to an agreement, so we move on.”

A player, media and fan favourite, O’Brien’s departure will leave a void in the locker room as well as the middle of the defence. Sure there were times last season where he was starting to look his age, but his experience helped the younger players both on and off the pitch and we would have loved to have seen him come back and take on some kind of player/coach role.

O’Brien made it clear though last season that he wanted to play and he still felt he had another good season of playing in him. The chances were he was going to have more of a bench role and the Whitecaps couldn’t afford to pay big bucks to someone for that. They also couldn’t risk signing a big money deal and then O’Brien going down injured with a season ending injury like DeMerit. Always a risk with a 35-year-old.

But O’Brien looks set to not be the only defender moving on and Robinson admitted that talks with Johnny Leveron have not progressed well, with the indication being that the Honduran international is another one not likely to be back in Vancouver for the new season.

“We’re still speaking to Johnny at the moment,” Robinson added. “We’re going to have 40 plus games next year, so I want to build a strong squad. If that means that’s with Johnny, then great. If that means it’s not with Johnny, then we’ll move on. At the moment we’re in talks with him and his agent but we’re not very close to agreeing anything. We’re just keeping our options open on that one.

“I don’t know if we’ll come to an agreement or not, which is why I’ve made the move [for Rodriguez] now.”

So, the Caps are down to three central defenders, but this isn’t likely to be the situation for too long.

“Ideally I would like to have five centrebacks on my roster because I know it will be a very long season and there will be injuries and suspensions,” Robinson continued. “I’ve got three [signed]. The minimum I will require is four, so I hope over the next few days we can add a fourth. There could be a fifth.”

Whilst the Whitecaps have some age and experience in the fullback positions through Steven Beitashour and Jordan Harvey, it’s a fairly young central defensive mix right now. Waston is 27, with Rodriguez 24 and Dean 21. They need to have an experienced head in there and Robinson hinted that that might be coming and it won’t be from overseas.

“It’s a tricky dilemma bringing in international players, as we all know, because we only have a certain amount of players. Ideally I like to try and bring in international forward thinking players. My belief, and my coaches belief, with Diego was too good to pass on because he brings a quality that I think we’ve been missing and I know that he will step up to the plate.

“Having said that, I’ve got Kendall, who is an international centreback, and also Diego now. It is important that we do keep some core guys, some American guys, some Canadian guys, which obviously we’ve got a lot of younger ones of them, but domestic players.

But before the pro-Canadian player crowd get too excited, it doesn’t look like Whitecaps Residency alumni, and current Canadian U20 international, Jackson Farmer is going to be that guy just yet.

The Caps may also look at adding a centreback from Thursday’s MLS SuperDraft, with Robinson admitting that they’ve identified five or six possible options from their scouting.

In amongst all of this centreback upheaval, it should also be remembered that the Whitecaps’ offseason additions are still in their early stages. Rodriguez is only the second new player to be added so far, but he’s far from the last.

“I’m still looking at two or three new additions,” Robinson said. “There will be more faces coming in. Can I give you a definitive timeline on that? No. But we are in the works with a few targets.”

So with less than two months till the new season kicks off (CBA pending of course!), what does Robinson see as still the main areas of concern in the Whitecaps squad that he needs to address?

“I want to try and build this squad as strong as I can,” he said. “I want to have a pool of players I’m comfortable with, whether they’re young or old. There are still three areas that I’m looking at.

“Hopefully I’ll be able to do that by the time training camp starts. If it means me starting tomorrow by getting the player I want or have identified, then I’ll do that. There will be four or five news paces, including the picks we have tomorrow, coming in in preseason.”

The Whitecaps player report back to training on January 24th. Exactly who will be there still remains to be seen.