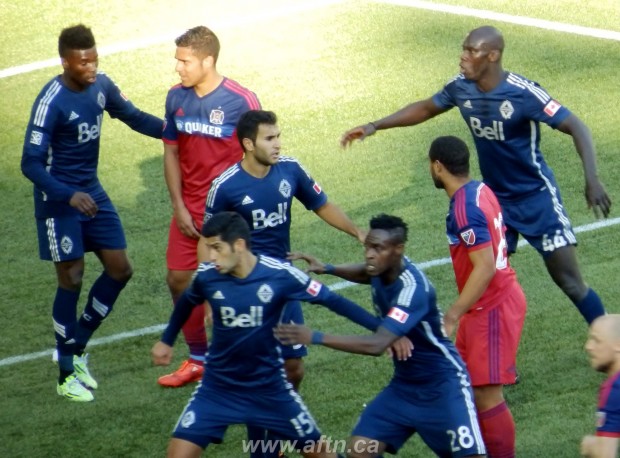 Preseason came to a close for Vancouver Whitecaps in a gloriously sunny, but chilly, Portland on Saturday afternoon. It looked like a third straight win was on the cards for the ‘Caps but a last second Fire goal cancelled out Pa Modou Kah’s first half effort and both teams had to be content with a 1-1 draw.

We bring you our match report and all the Whitecaps locker room reaction….

Vancouver Whitecaps preseason was wrapped up in a gloriously sunny Portland on Saturday afternoon with an uninspiring 1-1 draw with Chicago Fire.

The ‘Caps had already won the Portland preseason tournament for the second straight year heading into the game and they turned in a performance that felt like there was nothing on the line, whereas a place in next week’s starting line-up against Chicago should have been on everyone’s minds.

A first half header from Pa Modou Kah, his second in two games, looked to have won the game for Vancouver before Shahdon Winchester’s low long range drive in the final seconds saw a share of the spoils.

Vancouver went for another strong line-up, with Mauro Rosales and Erik Hurtado not dressing for the game having picked up knocks over the week’s action. Chicago also went for a near opening day line-up, as both teams hoped to nail down some final team chemistry before the season hopefully gets underway next Saturday.

The game was being played at a pretty pedestrian pace in the opening stages before Chicago’s Quincy Amarikwa nearly brought the game to life in the 8th minute with a shot that forced David Ousted into a diving save.

Ousted was called into action again in the 17th minute, producing an instinctive one-handed diving save to keep out a Kennedy Igboananike header off a cross.

Vancouver had possession but were struggling to do anything with it, and looked to be missing the creative output of Rosales out wide.

They won a corner at the half hour mark, which was eventually cleared out to Russell Teibert. The Canadian’s fierce shot looked like it may fly wide but it went on a straight course to Pa Modou Kah’s head and the Norwegian grabbed his second goal off the game when his header wrong-footed Fire keeper Sean Johnson. 1-0 to the Champions!

The Caps now had the edge and Nicolas Mezquida got past his man in the box before drilling a shot that Johnson had to turn around his near post for another corner, which this time came to nothing.

The half then played out to an uneventful end. You could say typical preseason fare, but we’ve seen a lot better from the Whitecaps up to this point.

The second half continued to be pretty uneventful. Vancouver had the best chance early on when Octavio Rivero played a low ball across goal that just begged for Pedro Morales to put it away but the ‘Caps captain made a poor effort at it.

The Whitecaps made their first few changes of the match in the 62nd minute and moments later the ball fell to Chicago’s Lovel Palmer in front of goal, ten yards out, from a corner but he blasted his and over.

Vancouver went up the field and Octavio Rivero should have doubled their lead when he was played in by a nice Kekuta Manneh ball but the Uruguayan hit the ball straight at Johnson as he tried to lob over him and it went out for a corner.

There’s was a mini flare up after Manneh tackled Fire DP Shaun Maloney, Chicago’s players taking umbrage at the Gambian standing over the Scot as he lay on the ground.

The Caps had a couple of chances with 15 minutes remaining. First Morales tried to round the keeper and score, but was thwarted, before Rivero blasted a Sam Adekugbe cutback wildly over.

With time running out and it looking like another win for Vancouver, Chicago sub Shahdon Winchester grabbed a draw for the Fire with almost the last kick of the game, drilling a low shot from the edge of the box past Ousted.

So a 1-1 final and while Vancouver will be happy to have finished the tournament undefeated, it was a pretty lacklustre performance at times and not ideally what Carl Robinson would have been looking for going into the last week of preseason camp.

There were a few highs in this game but overall it’s been a good week for the Whitecaps. Competition for places is fierce but you would have expected some of the guys to have done more in this game to try and force their way into the reckoning.

On the last game of preseason and the performance:

“Overall I think we’ve had a very good week of work. Obviously conceding in the last minute is never nice. It’s happened to us before and I’m sure it’ll happen to us again. We looked a bit tired at the end but it was important I got some guys 90 minutes, which is why I didn’t make any extra changes. I’ll give them that one.”

“In the first half I didn’t think we played as well as we could. I thought we were a little bit slow and sloppy at times. The last 15 minutes of the first half, when we played the ball correctly, we cut them open. Again we missed a couple of chances but we’re creating chances so I’m not too worried about that.”

On losing that goal:

On the adventure that is a Pa Modou Kah performance:

On whether Octavio Rivero needs more time to get up to speed:

On the game livening up after the substitutions:

“Three subs come on today. Sam, Koffie and Darren and were fantastic, in their attitude but also their playing. They’re knocking right on the door to start games. I’ve got some good decisions to make.”

Any concerns that the game a bit uninspiring at times with places on the line?:

“I think it was uninspiring for 90 minutes if I’m honest. I said to the guys at half time, it must be tough to play in because it was tough to watch. It was a fixture that seemed like it was the first preseason game. Actually it was the last preseason game, but it’s been a long week for us, a long nine days. I don’t hold that against anything. We’ll be ready for next week without a doubt. Again, you can take the positives and say we scored, we were unbeaten but it was important that we got guys minutes and I’ve got some good decisions to make.”

On the line-up decisions now facing him:

“I’ve got some great decisions to make and that’s good, because I didn’t have them last year.”

On whether any injury concerns lingering over Mauro Rosales:

“No, no doubt, he’s fine. I left it to him. I asked him if the season was to start today, would he be able to play, and he said yes, but I didn’t want to take a risk as he’s too important for me to lose first game.”

Did lack of creativity show important to team of Rosales?:

“He’s going to be missing in certain games this year through tiredness, through manager’s decisions, through injury or suspension, so other players will get chances. Is he the type of player we need in our team? Yes. We’ve got Nico that can play there. We’ve got a number of players who can, so I’m not too worried.”

What’s the key focus now going into the last week of preseason?:

“Just tidying up a few things. There’s a few areas I think we need to improve on which we were a bit slow and sloppy on today, but we’ll get to work on that next week because we haven’t really touched on them. Set pieces. We’re a threat from set pieces now, so we’ll tidy up on that. I’ll just make sure that they’re ready and happy going into next week’s game because if my group plays when they’re happy and with a smile on their face, then they’re enjoyable to watch.”

Does he expect a strange week with CBA negotiations up in the air?:

“No, week as normal. I’ll see you guys Monday and we’ll go from there.”

Where does he see the team at going into last week of preseason?:

“Looking back at the game against Portland, not necessarily this game, but the Portland game, I thought everybody looked good, I really did. There are a few things we need to sharpen up on but other than that the intensity was there, the energy was there and I think come March 7th the energy will be there and everyone will be ready to go.”

Is Kah the new defensive goalscorer on the team?:

“Yeah, preseason, two for two. He’s getting his head on everything. Set pieces, him and Kendall should be a wrecking ball in there, so it’ll be nice going forward.”

On what Waston and Kah will mean to his goalscoring chances:

“With those two guys on set pieces, it’ll open up a lot more opportunities and for me, it’s also that second ball. Hopefully I can get my head on a few this season, but if those guys are going to get their head on the ball, I’m going to pick up the pieces hopefully.”

How strange a week will it be with all the CBA negotiations?:

“We’re going to approach it like any other week going into a game, but yeah, we’re going to have that in the back of our heads and hopefully we can come to an agreement.”

“All the bargaining committee members from each team will be flying in [to DC], so that’s really all I can go on from that.”