I’ve been going to football matches for over thirty years now. From the early days of my grandad taking me to see Glenrothes Juniors to watching East Fife and Vancouver Whitecaps today.

I thought I’d seen most things but last night’s Caps game was a first for me, with the match being played in a thunderstorm and delayed mid game for nearly two and half hours to let the thunder and lightning move away.

When the match resumed from the enforced break, the torrential rain, the uncovered terracing, the empty spaces in the grandstand and the tremendous echo of the Southside chants around the stadium made me feel at home. It was just like being back watching East Fife!

With the Caps having only two wins in nine, and their away form poor, three points at home to Puerto Rico Islanders was a must, no matter what the weather conditions were.

As the game started, there was just the odd spit in the air and the Southside were in fine voice, with the Caps shooting that way for the first half. The former didn’t last for long though and seconds later it was monsoon conditions.

On the pitch, both teams looked hungry and keen from the off and had some early half chances that they couldn’t convert. Vancouver’s best early chance came from Charles Gbeke, who beat the Puerto Rico offside trap three minutes in, but was unable to round keeper Michael Behonick.

The rain seemed to suit Vancouver though and they took the lead a minute later. it wasn’t a pretty goal, but hey, they all count!

Marcus Haber pounced on a poor header back and knocked the ball past Behonick just inside the box and managed to slide it in from one yard out to cue soggy celebrations in the Southside.

The conditions surprisingly weren’t spoiling the game and both sides continued to attack. There were some fierce blocks and tackles flying in from both sides, but no real shots threatening either goal.

As half time approached, so did a thunderstorm. The seemingly endless weeks of sun and mid to high twenties temperatures were taking their toll on the city and lightning could be seen over the mountains. Lots and lots of lightning! So much so in fact that the players were taken off the pitch with two minutes of the half still to be played. 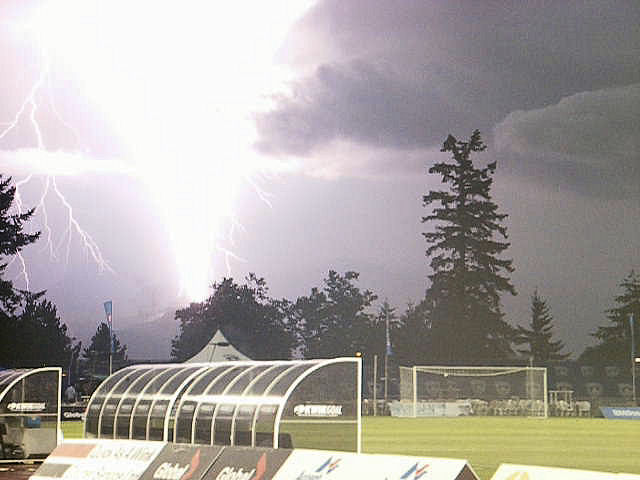 As fans were being encouraged to make their way from the metal seating in the east and south sides of the stadium, the extended half time interval began and went on and on and on, well you get the picture.

As the minutes ticked by we were informed that the game would not recommence until thirty minutes passed without thunder – the lightning didn’t seem to be an issue! Each time we got a few minutes into this time, another flash of lightning filled the sky and another peel of thunder rumbled.

To me, it was amazing to see that they planned to finish the game no matter what. In the UK, they’d have just called it a day after about fifteen minutes! They obviously breed them hardier in Canada.

The delay was too much for some though and many made their way home. Those brave, keen souls that remained though were rewarded after about 135 minutes when play finally resumed just after 10 o’clock local time.

The grandstand was pretty empty, but the Southsiders made their way back to the open air and wet bleachers to take our place for the second half. Top marks to the Club for rewarding our hardyness with some free beer, which was a great touch and much appreciated. I’d also got a free hot dog during the break, so all in all it was turning in to a great night out!

The first half was completed and the second half got underway immediately, and what an entertaining second half it was. Five goals and action galore.

Vancouver doubled their advantage on 51 minutes when the Islanders’ Kyle Veris headed Tyrell Burgess’ dangerous corner into his own net. 2-0 Caps.

The Whitecaps started to pressure the Puerto Rico goal and took up camp in their half. After a few close calls, they got their third after 64 minutes and what a beauty it was.

Collecting a through ball on the left from Gordon Chin, Marlon James cut inside, ghosted past the Islanders defender and unleashed an unstoppable 25 yarder past a helpless Behonick. 3-0 caps and the best goal most Caps fans won’t have seen!

The Caps started to pepper the Islanders’ goal and came close on a few occasions. It was the Islanders who scored next though when Marco Reda took the feet from under Josh Hansen in the box and the ex Cap picked himself up to slot home the penalty after 76 minutes.

Vancouver restored their three goal advantage six minutes later and it was James again who met Burgess’ cross with a bullet of a header for 4-1.

Hansen and Puerto Rico grabbed a flattering second goal as the game ticked into injury time, but the Caps ran out easy winners when the final whistle came and ended a very eventful evening.

Puerto Rico’s minds were on the forthcoming Champions League qualifier against Toronto and rested eight first team regulars. Don’t let this take away from Vancouver’s performance though as they worked hard as a team and got their just reward.

With the next three games being away from home, this is now the make or break time for Vancouver’s season and making the playoffs. Good job they’ll be going into it full of confidence.