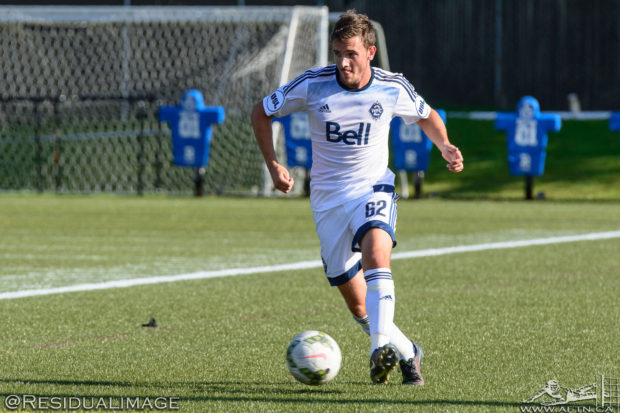 The WFC2 squad officially grew by three on Friday with the announcement that defenders Deklan Wynne and Chris Serban, and striker Thomas Sanner had all been re-signed for the upcoming season.

For 21-year-old New Zealand international Wynne, this will technically be his third season with the Whitecaps, but having joined the team towards the end of WFC2’s inaugural USL season in 2015, injury and international call-ups have limited the defender to just 14 appearances for the Whitecaps to date.

It may feel that we haven’t seen what Wynne has to offer the Whitecaps yet, but he’s back, healthy, and hoping that this coming season will change all that.

“When I first started, I only joined at the end of that season,” Wynne told AFTN. “I only got a few games in, then last year I had a groin injury for eight months, so I only played about 12 games. This is really a season where I hope to stay fit and play as many games as possible and definitely try to catch the eye of the first team if I can.”

After the success in moving on Alphonso Davies, Kyle Greig, Brett Levis, and Spencer Richey up to the MLS team, you can be sure that that’s on the mind of all the WFC2 players right now, and Wynne certainly has the attributes to make it at the higher level of the game.

Born in South Africa, Wynne emigrated to New Zealand as a 14-year-old in 2010. It’s a move that opened doors to international football, bringing both joy and heartbreak along the way so far in his fledgling career as he’s represented the All Whites at U20, U23 and senior levels on the world stage.

Wynne made his senior debut for New Zealand in a friendly in November 2014. The following year he was selected for the Kiwi’s squad for the FIFA U20 World Cup, to be played on home soil. A dream come true for any young footballer.

Wynne played in all four matches as New Zealand made it out of their group to advance to the knockout stages, narrowly losing their Round of 16 tie with Portugal 2-1. It was a great learning experience for the young All Whites, and one they hoped would set them up nicely for the 2016 Olympics in Rio.

The 2015 Pacific Games took place two months after the World Cup in Papua New Guinea. The competition also doubled as the Oceania Football Confederation’s Olympic qualifying tournament. Wynne was again selected for the All White’s team and New Zealand looked well on their way to qualification after beating Vanuatu 2-0.

But Vanuatu claimed Wynne was not eligible to play for New Zealand, and despite the All Whites getting approval before the tournament started, they were crazily found to have fielded an ineligible player in Wynne and were kicked out of the tournament, thus missing the Olympics.

At one stage it looked like his international career with the Kiwis was over before it had really begun, but in a further twist, FIFA found in New Zealand’s favour months later.

By that stage it was too late for Rio, but Wynne is now officially eligible to play for New Zealand. Some consolation, but the initial decision and expulsion was hard for everyone at the time, especially Wynne.

“It was definitely tough when we first heard it because we were still in Papua New Guinea when it happened,” Wynne told us. “When they let us know that we couldn’t play the semi-final everyone was obviously quite upset. It was just one of those things.

“That happened just before I came here, so it was good to come here and get away from all the media and stuff. So it was good that I just came over and now I’m playing here.”

It was Wynne’s performance in that summer’s World Cup that put him on the Whitecaps radar to begin with.

“After I played in the U20 World Cup that was in New Zealand, me and Sam Brotherton, we had a trial here,” Wynne revealed. “We both trialled with the first team and then eventually I came down here and they asked if I wanted to sign for WFC2. The city’s really nice so I agreed to sign here and all’s good.”

Brotherton ended up going to college with NCAA Big Ten’s Wisconsin Badgers and playing PDL the last two summers with Des Moines Menace. At the start of this month, he signed with Sunderland, where he’ll initially be involved with their U23 development side.

Wynne stayed in Vancouver and has a great chance to impress this year under new head coach Rich Fagan.

“First and foremost, I’d love to see him stay healthy,” Fagan told AFTN. “He’s got that potential. He’s a good defender and technically he’s sound, he wants to get forward, he wants to join the attack. So we see the potential for sure, we just need a good run of health. With that comes rhythm, with rhythm comes confidence. We’ve yet to see the best of him.” 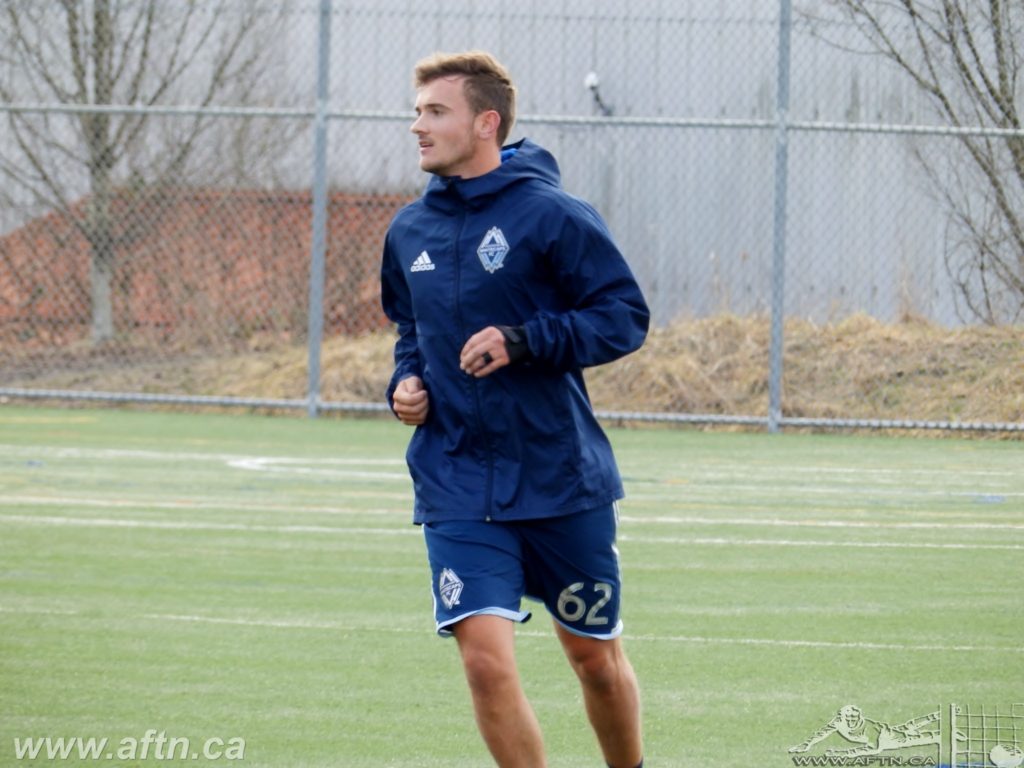 This will be the season that both Wynne and Fagan will hope will remedy that.

He may have only played a handful of games for the ‘Caps so far, but with trips to the likes of Rio Grande, San Antonio, Phoenix, and Sacramento in amongst those away matches he’s played, Wynne’s certainly had a testing introduction to the league, but it’s only left him looking forward to more.

“It definitely gave me a taste of what it’s going to be like,” Wynne said of his USL experiences so far. “Travelling to all these places where it’s really hot or whatever. It’s something I haven’t experienced. It was a good experience.

“I hope to play every game this season. I just want to be involved. That’s my main goal. To get as many minutes as possible and to help the team win.”

Wynne’s used to being in a developmental set up. After playing his youth football with East Coast Bays, he made the move to Wanderers SC, a club that intrigues me and should do all fans wondering what can be done to help Canada’s young players develop better in the pro game.

The SC doesn’t stand for Soccer Club as you may think. It stands for Special Club.

Wanderers were founded in 2013 and both Wynne and Brotherton were amongst the first players to go there. It was created solely to develop players for the New Zealand U20 team, featuring only players younger than 20-years-old. The goal was to keep the players together longer, developing a more cohesive unit than bringing in players from around the globe that may have been getting developed at different paces.

The team was dissolved in 2015, but could such a club work in Canada, perhaps in the Canadian Premier League? And did it actually help the New Zealand program? That’s for another day, but Wynne certainly enjoyed his Wanderers experience.

“We don’t have much,” Wynne said of the soccer scene in New Zealand. “We only have one professional team in New Zealand, so it’s quite hard to make it anywhere. But it was definitely good for us for the World Cup because we were all playing together. We played together for two years. You’re playing with your best friends and you’re just training every day. It was two of the best years of my life. I’ll never forget that either.”

We saw Wynne last year play both as left back and on the left wing. He’s an attacking player with a cultured left foot who really enjoys getting forward, but despite the dual roles last season, he sees himself firmly as a defender.

“[I’m] definitely a left back,” Wynne is quick to reply. “When I’ve played for New Zealand, I’ve always played left back. Now that we’ve started three at the back with wing backs, when I go into that camp I play more of a wing back position, so I like getting up and down.”

Wynne will certainly get a lot of minutes on the ‘Caps backline this season, and he’s going to have a fellow Kiwi in there alongside of him in second round SuperDraft selection Francis de Vries.

The pair knew of each other from the New Zealand program, but had never met before taking to the pitch in Vancouver, but you just have to spend a few minutes watching them together to see that they’ve already formed an immediate bond both on and off the pitch.

“It’s always good to have someone from close to home,” Wynne said of having another All White at the ‘Caps. “Just talking to him makes me feel a lot happier. You can really tell we’re going to be good friends. It’s just good to have him here.”

At 22, de Vries will be one of the older players on the WFC2 squad this year! It’s going to be a young team, which could lead to a tough season, but on the flip side, there’s a real team chemistry and understanding there and many of these players have already played together for years.

There’s going to be ups and downs for sure, and I maybe wouldn’t expect another run to the Western Conference final, but never say never. The talent is certainly there and Wynne is excited by what the team may produce this coming season.

“We’re all young, 20’s, even 18’s and 17’s,” Wynne told us. “It’s obviously a young team and other teams recognise that but even the young guys are experienced from last season. They played a whole season at USL, so they all know what to expect. We’ll do well.” 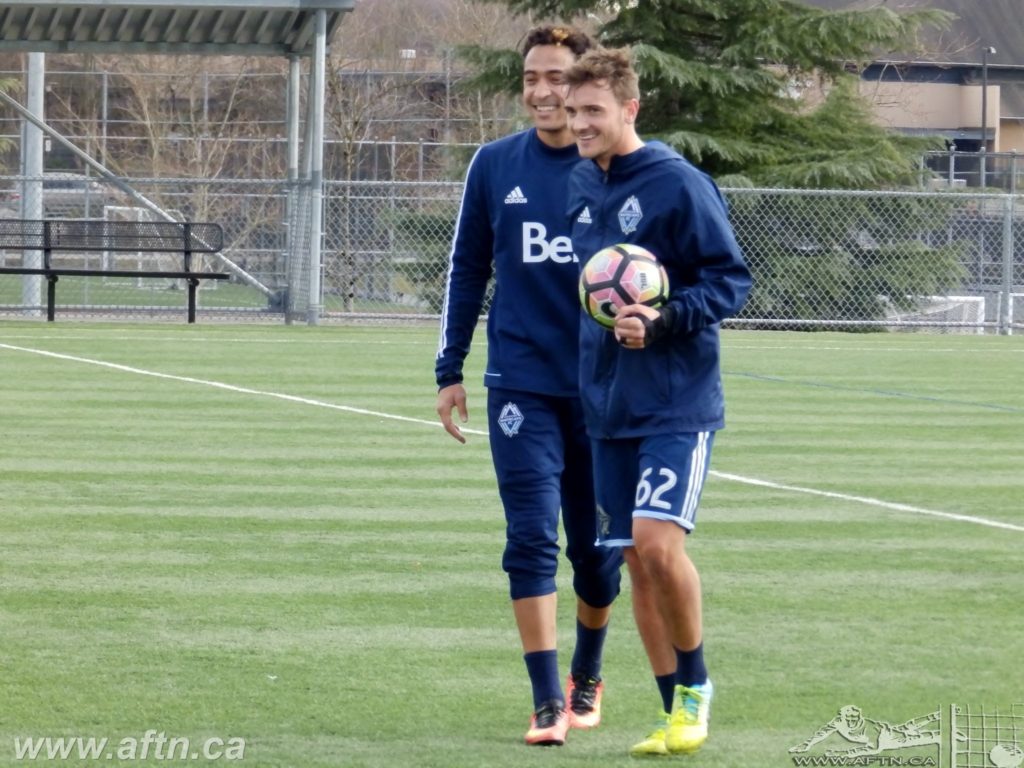