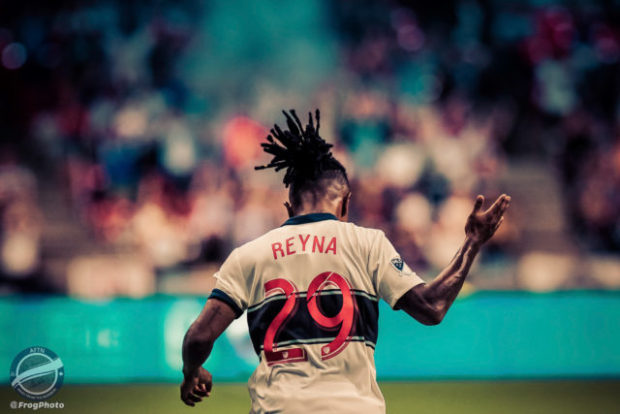 Vancouver Whitecaps forward Yordy Reyna and defender Jasser Khmiri have been fined by the club and forced to self quarantine for a fortnight after breaking physical distancing protocols by briefly taking part in a group game of football in a local park on Tuesday.

The pair, who share an apartment building and are regularly seen in each others company, were out for their personal workout session when a group of people recognized them at Vancouver’s Andy Livingstone Park and invited them both to play in their pick up game.

The Peruvian and Tunisian foolishly agreed and although they only played for around five minutes, any such group gathering breaks the strict rules put in place by the BC Government during the current virus and goes against the firm policies expected of the players by the Whitecaps.

Unfortunately for the pair, their brief return to the football pitch was captured by Global TV cameras, who happened to be filming at the park at the time for a piece around people being keen to have restrictions relaxed, highlighting those who were already flouting the rules.

Reyna was initially spotted in the Global piece and his involvement was flagged up to the Whitecaps, who had no other option but to act, fining the forward and placing him in quarantine for 14 days.

“It’s unacceptable,” Whitecaps Sporting Director Axel Schuster told media on a hastily arranged Zoom conference call on Wednesday afternoon. “He’s a public person. We have to be role models at this time and he made a lot of mistakes there. He apologized and knew that immediately and was very open and honest with us.

“It was bad for a lot of reasons what he did, but he is a human being. He didn’t go out to not give a shit about all of that and disrespect all the rules. He was there and there was a group of guys.”

The Whitecaps were first alerted on Tuesday evening, speaking to the player on Wednesday morning and liaising with the league as to what protocols needed to be followed. The team announced Reyna’s fine first on Wednesday afternoon, but footage soon came out showing Khmiri involved in the game as well and a further statement was issued later that evening dishing out the same punishment to the centre back.

Schuster is satisfied that the resultant fine and quarantine is an appropriate punishment for the pair, with Reyna said to be embarrassed and apologetic for the incident.

“The moment we called him he was lying on the ground and saying ‘sorry, I made everything wrong’ and ‘it’s absolutely my fault’,” Schuster revealed. “He didn’t even know that it had become such a story. We were proactive and immediately said to him it doesn’t matter if you apologize, it doesn’t matter that somebody else noticed it, we will fine you and we have to make you an example.

“He was the first one to make a mistake and I’d be really happy if no-one made a mistake, but the first one is an example for everyone else not to do it the same way. That was why we had to make it public.”

Reyna and Khmiri’s quarantine period means that they will not be able to take part in any training that the Whitecaps undertake in the next two weeks. This will be a further setback for the Tunisian who has seen little game time for the ‘Caps and was recently seen in the team’s training facility further rehabbing his injured knee.

MLS were allowing clubs to have players back for voluntary individual workouts from today, May 6. Although the Whitecaps were not immediately able to adopt that policy due to local restrictions, the hope is that this situation may shortly change.

The Whitecaps have been community leaders during the current pandemic with their fundraising efforts for Vancouver Aquarium and Vancouver Foodbank highly praised over the last couple of weeks. Schuster was keen to stress that the incident was a one-off, but it will allow the club to reinforce the role that they want the players to play during these testing times.

“I think our guys did a great job in the last month, weeks, and we have to be a role model, especially now on that pathway back onto the pitch,” Schuster said. “We have to be the role model. We have to be top of the top to give the right message to all the kids.