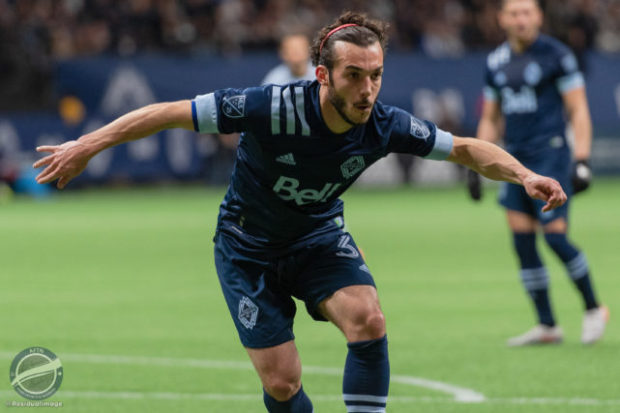 Over the month of December, we debated which players would make a Whitecaps of the Decade XI for the 2010s. Unsurprisingly that team only featured one Canadian player – Alphonso Davies.

So that got us thinking. Which players would make a Vancouver Whitecaps All-Canadian XI from the MLS era so far? Could we actually fill each position with a Canadian player? How would that team line up formation-wise and how competitive would it be? A lot to ponder.

We were also curious how the MLS team would shape up to Whitecaps All-Canadian teams from the past in the D2 (CSL/USL) and NASL eras, so we’re going to bring you a breakdown of those over the next couple of weeks, along with All-American and All-International Whitecaps MLS XIs.

For those teams of the past, it’s a more straight forward job. Those eras are done and dusted and long in the history books. For MLS though we have the quandary of what eligibility criteria do you go with?

Do you just look at appearances and longevity? Do you primarily look for contributions in terms of goals, assists, clean sheets etc? How much does the player’s individual quality and performances elsewhere factor in if they aren’t/weren’t with the Whitecaps for long (Lucas Cavallini being the prime person to fall into this category)? Do you just pick a player for their position or could a player be played slightly out of position if we’ve seen them cover more than one position for the team?

So here’s what we’ve decided. All of the above will come into play!

Our final XI is based mostly on their contributions on the pitch for the Whitecaps, but on a couple of occasions we’re looking at their quality too. Are they one of the best players to have pulled on a Whitecaps jersey, even if they haven’t clocked up the appearances? If so, they’re in based on past, present, and future potential, with what they’ve achieved elsewhere and will hopefully bring to the team.

Basically, we’ve gone for who we feel are the most talented 11 Canadians to pull on a Whitecaps jersey from 2011 to 2020, lining them up in a 4-2-3-1 formation . Here’s who we settled on. There may be a couple of contentious inclusions and omissions, so let us know below if you disagree! 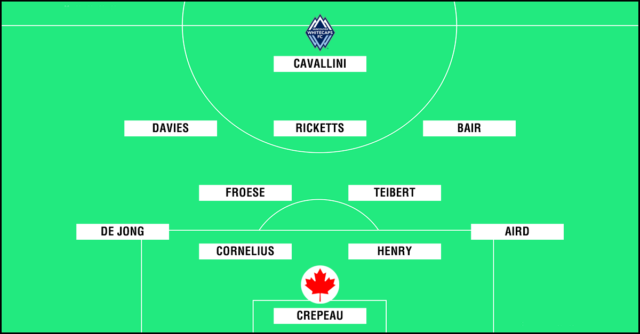 GOALKEEPER – MAXIME CREPEAU: He’s only in his second season with the Whitecaps but he’s already shown his importance to the team, past, present, and future. Despite there being several Canadian keepers on the ‘Caps books over the years, Crepeau is also the only one to have actually played a MLS match. He’s made 28 league and two Canadian Championship appearances to date, keeping six clean sheets, making 116 saves, and setting a MLS save record in an individual match. And you feel the best is still to come from the 25-year-old.

RIGHT BACK – FRASER AIRD: Now Aird may be a surprise to many for his inclusion and I went back and forth on it. Canadian right backs was a shallow pool to pick from. I considered slotting Doneil Henry or Derek Cornelius in there, but their performances there were not covered in glory, although neither were Aird’s to be fair. A three in the back formation was also considered, but slotting in the rest of the team around that then became difficult. So Aird it was.

He only spent once season with Vancouver, making 18 MLS appearances, 16 of them starts, and six other appearances during his stint on loan from Rangers. No goals, no assists, and nothing to make him stand out, we’re not saying it’s a de facto pick, but…. He had a mixed time after going back to Scotland and is now back in Canada with Valour FC in the CPL.

CENTRE BACKS – DONEIL HENRY AND DEREK CORNELIUS: A potentially power pairing that played one season together in 2019 on a defence that was one of the worst in the ‘Caps MLS era when it came to goals conceded. That doesn’t scream all-stars admittedly, but individually both Canadian national team players are in on merit for their performances. David Edgar would have slotted in as well if we’d gone with three at the back or moved one of these two to right back, but he only made eight appearances here in his two seasons that were curtailed by injury.

Henry spent two seasons in Vancouver, clocking up 39 league and five Canadian Championship appearances, the third most of any Canadian in the ‘Caps MLS era, which is telling in itself! He registered four goals and one assist, all in 2019, before moving on this past offseason to Suwon Samsung Bluewings in Korea.

Cornelius is in his second season with the club and has 18 league and one Canadian Championship appearance to his name, with one goal. He really started to come onto his game in the second half of last season and the future looks bright for the 22-year-old at both club and international levels.

LEFT BACK – MARCEL DE JONG: Whereas the right back position was devoid of any real competition, the other wing saw the likes of Sam Adekugbe and Brett Levis edged out by the veteran Canadian international. De Jong is tied with Henry for the third most MLS appearances for the ‘Caps by a Canadian with 39, with another 12 appearances across other competitions before moving on to Pacific FC in the CPL at the start of the 2019 season. He had no goals but tallied four assists in his two and a half seasons in Vancouver, and was a steady feature on a defensive ship that certainly needed that at times.

DEFENSIVE/CENTRAL MIDFIELD – RUSSELL TEIBERT AND KIANZ FROESE: No matter what formation we went with, one player guaranteed to be in any Whitecaps Canadian XI of the MLS era was Russell Teibert. The only player to play in every season, the homegrown star leads the way among his countrymen with 164 MLS appearances, and is the second highest of any player behind Jordan Harvey. With a further 32 appearances in other competitions, Teibert has been the Canadian face of the team for the past 10 seasons, tallying three goals and 17 assists in league play. At 27-years-old, he should still have a lot left in his tank to add to those numbers.

Slotting in beside him is another Residency product, Kianz Froese. Much was expected of the Manitoban native when he signed a MLS deal, but circumstance dictated otherwise and he only made 15 MLS appearances in his three seasons on the first team roster, scoring one goal. He made nine appearances across other competitions, tallying another goal in Champions League action, and that was enough to get him into this team ahead of the one-season Terry Dunfield. Froese headed to Europe and has done well, currently making a name for himself with German side FC Saarbrücken.

RIGHT MIDFIELD/WING – THEO BAIR: Bair may be another surprise inclusion for some, but the nature of the line-up, and the limited players available to pick from to begin with, sees the 20-year old academy alumni make it in, but he’s also there by merit based on his excellent 2019 breakout season, where he had two goals and two assists in 17 MLS appearances, 10 of them starts. That appearance number actually places him 8th among Canadian players in the ‘Caps MLS era. There’s a lot more to come from the forward, and his development over the next couple of seasons will be interesting to watch.

LEFT MIDFIELD/WING – ALPHONSO DAVIES: One of the first names anyone is likely to pencil in to an all-time Whitecaps XI, never mind just the MLS era, Alphonso Davies has left an indelible mark in the team’s folklore, and not just from the transfer fee his departure brought. His two and a half seasons in MLS with Vancouver will certainly be talked about for many years to come, especially as he continues to go from strength to strength over in Europe.

He places second in all-time MLS appearances for the Whitecaps by a Canadian player after Teibert, playing in 66 matches, with only just over half of them being starts. He scored eight goals and added 12 assists in those appearances though, making another 16 across other competitions, where he added another four goals.

ATTACKING MIDFIELDER/SECOND STRIKER – TOSAINT RICKETTS: He’s only been with the Whitecaps for nine months and over half of those were the offseason, but Tosaint Ricketts’ contributions during that time see him make his way into the team. He has 10 MLS appearances for the ‘Caps, spanning two seasons, but in that small amount of time he’s scored two goals and added two assists.

There are only three players above him in appearances that don’t make it into this 11, and one of those (Adekugbe, Levis, and Dunfield) are attacking players. Ricketts’ inclusion works with this team in both a 4-2-3-1 or a 4-4-2 formation, where he’d move up top. Part of the reason for his inclusion is also future potential. He’s going to be around for the next two seasons and although his minutes may be limited, you feel his contributions won’t be.

FORWARD – LUCAS CAVALLINI: And if we’re talking future potential and inclusion based on past performances elsewhere, that’s why we have Lucas Cavallini in the team. He has two appearances for the ‘Caps so far, with no goals and a missed penalty to his name. But he’s shown what he can do in Uruguay, Mexico, and on the international stage, plus in preseason with Vancouver. He is the most talented Canadian striker the team has had in its MLS era. That has to count for something. The future will hopefully be bright for the Tank as he steamrollers the opposition here for many years to come.

Is that a team that could compete in MLS? How much of a damning indictment is it that in ten seasons there is such a limited player pool to pick from when it comes to Canadian players making a meaningful contribution and not just the odd game here and there? Let us know your thoughts below.