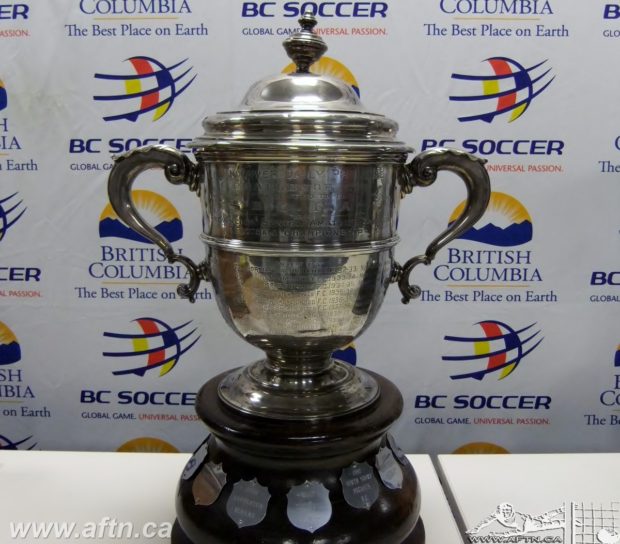 There’s an exciting weekend of BC Provincial Cup action coming up. The A Cup and Doug Day U21 Cup are at the semi-final stage, with the larger B Cup and Masters competitions at the quarter-final stage.

You can check out our round ups of both the A Cup and B Cup action from this past weekend on the site, along with a couple of video highlights from two of the Keith Millar B Cup matches.

And here’s Canucks4Ever’s preview of this weekend’s B Cup quarter-finals.

Lost in all of the Aldergrove hype has been a helluva performance in the tournament by Langley Utd. It’s Langley who are hosting the Nationals for the FVSL in the Fall and damned if the hometown team isn’t a win away from being in the competition. These guys have ground out a pair of tough 1-0 wins away on the Island against the VISL Champions and against a heavily favoured VMSL juggernaut in Rovers Tigers last week. Perhaps it has been the unflashy nature of these victories that have kept Langley out of the spot light, but there is no hiding now. Inter too have been less than spectacular in their own pair of 1-0 victories. They saw off the defending Provincial Champions, Pegasus, and then just slipped past another FVSL team in Port Moody in a match that had to be rearranged due to lighting issues. Port Moody felt like it was a chance wasted as Inter were perhaps at less than their best, possibly taking the Tri Cities boys lightly. Inter live for big games though and they are now one win away from a chance at redemption after losing the Provincial Final two seasons ago. The Italians always seem to do just enough, so don’t bet against yet another 1-0 score line. Langley will be boisterous and expect a charged up atmosphere at Willoughby, surely, but Inter is famous for this and I’ll take their pedigree to see them into the final.

This is the Match of the Round and possibly one of the biggest, if not the biggest, match in the FVSL’s history. Fraser Valley Champions Aldergrove have a chance to progress to the Provincial Cup final, which is a big deal given that the last time the league was this close North Delta lost on penalties to Inter and then bolted for the VMSL themselves. However, this season, this semi-final carries more weight because a win qualifies the team for the Nationals, a tournament that the FVSL is hosting in October. BC is getting two berths, so a finals appearance would be enough to make Aldergrove the FVSL’s first ever entrant at a National Championship.

Standing in their way is not VMSL Champions and Provincial favourites Coquitlam Metro Ford, but rather recently promoted Westside FC, who finished seventh in the VMSL and had to win a playoff just to get into the competition. It seemed everything had to go the Vancouver boys’ way to get past Coquitlam last round, but Aldergrove won’t be bothered one bit by the Westsiders good fortune. They will be no doubt confident of their ability to knock off these mid-table Cinderellas especially as it seems that they have reached an agreement to keep talisman Connor Hildebrandt in town and away from PDL duties this weekend.

These two teams play completely different styles and Westside will hope that their controlled build up will net them results against Aldergrove’s direct play. Maybe the pressure gets to the FVSL boys, it’s surely all on them. They just simply cannot lose as a Champion to a team from the middle of the table of a league that has, for so long, had its foot on the neck of the FVSL. This is what they have been building to and they cannot let the significance of the occasion get to them. This is the changing of the guard, the passing of the torch, this the FVSL’s time. Aldergrove cannot bottle it, can they?