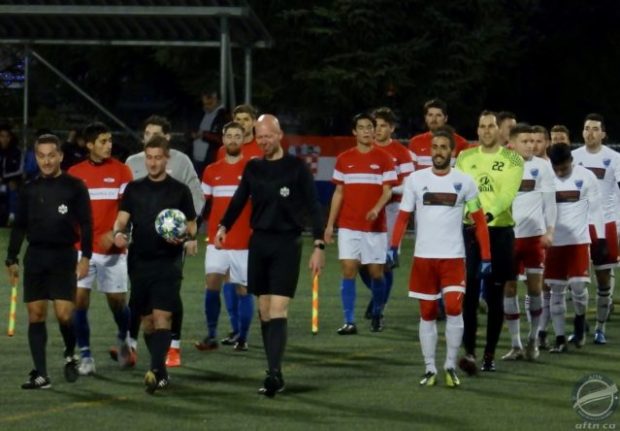 The weather may have had its now seemingly annual disruption to the Vancouver Metro Soccer League (VMSL) season, but it’s certainly made for an exciting finish to the 2019/20 campaign in many of the divisions with many of the championship, promotion, and relegation issues still up for grabs.

Four of the 12 VMSL Premier teams will wrap up their league campaign on Friday evening, including current leaders Rino’s Tigers. As things currently stand the title, one of the relegation spots, and three of the league’s Provincial Cup berths remain up for grabs, although a lot may be decided by the end of today.

The race to be crowned 2019/20 VMSL Premier champions has been a two horse race for a few weeks now, with both Rino’s Tigers and Croatia SC stuttering to get over the finishing line.

Defending champs Croatia are heavy favourites to go back to back. Sitting in second, two points off top spot but with two games in hand, they need two wins from their last three matches to retain their title. But as we saw with CCB LFC United last season, who were in a very similar position but faltered down the stretch, nothing can be taken as a foregone conclusion.

Croatia haven’t looked world beaters the past few weeks, losing to West Van and then scraping by lowly Burnaby Selects White Eagles and Guildford FC FASA by a solitary goal in league play and crashing out of the Imperial Cup at the quarter-final stage to bottom side ICSF Columbus a week ago.

They face a resurgent Club Inter EDC Burnaby at Burnaby Lake tonight (kick off is 8.10pm on Field 3), with matches at fourth placed BCT Rovers Hurricanes and Columbus still to come this month. On paper, Croatia should get the points they need to lift another championship, but any points dropped against Inter could make this a very interesting few weeks.

Waiting in the wings to pounce are current leader Rino’s Tigers. Having just been pipped to the title by a last day loss to Croatia last season, they lead the league by two points right now, but only have one game remaining – tonight’s clash with fifth placed SFC Pegasus at Newton Athletic Park (kick off 9.10pm on the stadium turf).

Rino’s have also stuttered over the finishing line the past few weeks, losing to West Van at the start of February then dropping two points to Coquitlam Metro Ford Wolves a few weeks later, highlights of which you can see below.

They’ll look to finish off their league season tonight with a victory, then sit and wait to see what Croatia do in their remaining games as they prepare for another crack at the BC Provincial Cup in April.

They won’t have it their own way against Pegasus, however, with the Horsemen battling to keep their own season alive and clinch a Provincial Cup spot of their own.

The VMSL earns six spots in the Provincial A Cup. The top four in the Premier Division plus the two Imperial Cup finalists secure those spots, but if any of the latter are also a top four finishing team then the 5th and possibly 6th place finishers in the league will earn a place instead.

We’ll have more on the Imperial Cup next week ahead of the upcoming semi-finals, but as one of those semis guarantees either CCB or Columbus a Provincial Cup place, things have suddenly got very interesting in the league standings.

Right now, Rino’s, Croatia, and West Van have secured their berth at the Provincials. BCT Hurricanes are currently in fourth place in the division on 35 points, with Metro Ford fifth on 32, and Pegasus sixth on 31. All three teams have two matches remaining and with none of them playing each other.

The Hurricanes are still favourites to lock up fourth. They face already relegated FASA tonight but then round off their season against title chasing Croatia. Metro Ford have to play West Van then the White Eagles, while Pegasus face Rino’s then CCB.

Metro Ford also play West Van in an Imperial Cup semi-final next weekend, so have two chances at getting back to the Provincials.

At the bottom end of the table, Guildford FASA are second bottom but are already relegated with one game remaining. Last placed ICSF Columbus may look down and out, eight points adrift of safety, but they have four matches still to play. Win all four and they are safe from relegation, sending the White Eagles down, and they will be buoyed by their shock Imperial Cup win last week against Croatia.

So much football still to be played and so much still to be decided, but some should become a lot clearer after tonight. Here’s how the standings look right now. 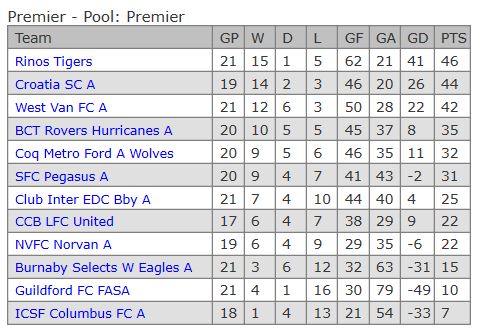 Here’s this weekend’s Premier fixtures if you fancy getting out to a game.

The race to go up to the Premier from Division 1 is also far from over.

Richmond FC Hibernian had already clinched one of the two promotion spots a few weeks back, and the UBC second team continued their unbeaten season by clinching the Division 1 title on Sunday in a hard fought 2-1 win over Burnaby Metro Athletic at Burnaby Lake.

Dallin Akune fired Richmond ahead in the 13th minute, with Sebastian Dzikowski adding a second on the hour mark. Burnaby Metro gave themselves some hope with ten minutes remaining, and despite a frantic late push they couldn’t find another, in a loss that could also hit their own promotion hopes hard.

The Hibs still have two matches remaining in their quest to go undefeated for the season and you can see both of Richmond’s goals from the Metro Athletic game in our video below.

Burnaby Metro still sit in the second promotion spot on 43 points, having completed their season. Coquitlam Metro Ford Lupi are third, three points behind and with a game at home to Rino’s Fury tonight. If they win that, they could be in a promotion playoff game with Metro Athletic.

But fourth placed Westside are also still in with a shout. They currently sit four points back of Metro Athletic with two games left to play. They finish their season at Richmond Hibernian tonight and then take on Rino’s Fury next Saturday. Two wins and they’re promoted, a win and a draw and they’re in a playoff.

Exciting stuff, and remember you can follow the latest news, scores, standings, and fixtures all season long on VMSLsoccer.com and don’t forget to check out TakeThePiss.com for all your local football banter.