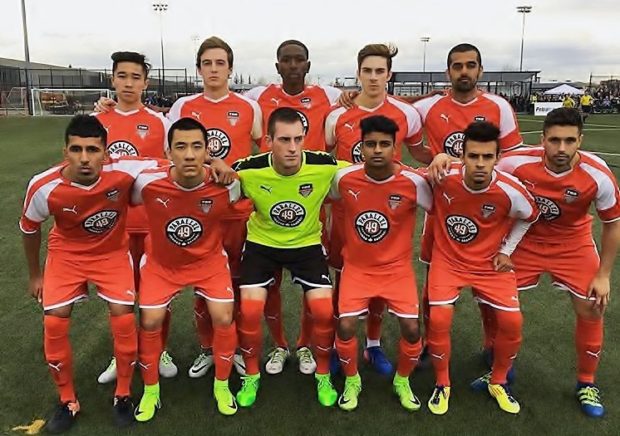 It started off like a dream but ended in a nightmare.

TSS FC Rovers first ever PDL match looked like being the stuff of fairytales, with the BC boys jumping out to a three goal lead before letting it all slip away at last season’s Western Conference champions Calgary Foothills on a balmy Friday night, going down 4-3 to a stoppage time winner for the home side.

An emotional rollercoaster of a match, it was the veritable tale of two halves, with TSS dominating the first before Calgary got a bollocking at half time from head coach Tommy Wheeldon Jr and came out all guns blazing in the second, launching an aerial bombardment into the TSS box, wearing the visitors down, and playing some football the old Crazy Gang at Wimbledon would have been proud of.

It wasn’t pretty, but it was effective. Heartbreaking for TSS Rovers, but head coach Colin Elmes could at least take a number of positives out of his team’s first ever competitive match.

“Gutted, for sure, about how it all unfolded,” Elmes told AFTN after the match. “But some very, very positive things. Our fight mechanism for good portions of the match, was very good. We were very calm in possession in a lot of instances.

“We played our way out of very tight spaces and created some opportunities that in our previous preseason game we weren’t able to accomplish. We’ve moved the bar here.”

TSS Rovers needed just over a minute to make their mark on the PDL. Daniel Davidson was the man to secure his name in the history books, scoring the team’s first ever goal when he headed in a cross at the second attempt 72 seconds in, after his first effort crashed off the bar.

TSS’ depleted squad were in dreamland. It was the perfect start and it got even better for them in the 23rd minute when Davidson turned provider for Connor MacMillan this time, allowing his UFV Cascades, and former Kitsap Pumas, teammate to fire home the second, after the Rovers pounced on a giveaway.

The newbies were firing on all cylinders, but they suffered an injury blow with ten minutes of the half remaining as former SFU Clan captain Ryan Dhillon went off injured with what appears to be ligament damage. He’ll be fully assessed when the team heads back to Vancouver, but he’s going to be missing for at least a few weeks, which is a massive blow to TSS’ hopes.

He was replaced by striker Kristian Yli-Heitanen, a player who was TSS’ most recent addition and who was playing in the Richmond Summer League just eight days before.

And the Capilano Blues forward made his presence immediately after being set up by MacMillan and firing home a third low into the net with two minutes of the half remaining.

Three goals against last year’s PDL Championship runners-up was a start above everyone’s wildest expectations, including the coaching staff, but their joy was somewhat tempered a minute later when Calgary pulled one back from the spot after Whitecaps Residency alumni Kyle Jones went down a little too easy in the box after a tackle before picking himself up and burying the penalty.

So 3-1 at the half, but then everything was soon about to change in quite dramatic circumstances.

“The first half, both team were trying to play football,” Elmes told us. “We clearly did a more effective job when we got around goal and got up to 3-0 and then obviously to 3-1 just before the half. Then our opponents chose to drastically change their tactics and we had trouble coping with that over the next 45 minutes.”

Those tactics saw Calgary take the game to TSS right from the start of the second half, launching wave after wave of attacks and playing real route one football. The midfield playmakers were basically taken out of the game.

The TSS defence was under constant pressure, hardly getting any time on the ball, never mind getting it out of their half for any lengthy spells of time. They were bending and bending and eventually they broke in the 62nd minute when they failed to clear the danger and the ball came back through to Ajeej Sarkaria in the box, and the forward showed good composure to make the room to fire past Andrew Hicks in the Rovers goal.

You felt then that Calgary were going to tie things up, and they did with ten minutes remaining, when another flop in the box conned the referee, and the home side got their second penalty of the game, which Jones buried once more to make it three apiece.

The parity spurred TSS on and they took the game to Calgary but couldn’t find a way through. Just when it looked liked the Rovers were going to get a point in their first ever outing, they were left heartbroken two minutes into stoppage time when another Whitecaps Residency alumni, Ali Musse, rose to superbly head home a cross for the dramatic late winner and seal Calgary’s astonishing comeback.

“They clearly found a way of changing the dynamic of the game,” Elmes said. “It wore us down frankly and made it difficult for us. We got caught up in it and started to play in a similar fashion for parts of the game. Momentum. Goals change and the dynamic momentum shifted and they started to believe and we started to go, uh-oh.

“It pinned us back really good. Outside of the ten minutes after it went to 3-3, we were back on our front foot a little bit, and then the late goal kind of finished it off.”

Elmes wasn’t a fan of the direct approach taken by Calgary. It’s not how he wants his team to play football, but it worked and ultimately, TSS had no answer for it, even if that meant the game lost a little as a spectacle.

“The game, albeit exciting and played with a lot of adrenalin and a lot of action, the game itself optically kind of lost it’s way a little bit,” Elmes said. “There were a lot of long, diagonal balls played that led to aerial battles that turned into second ball battles, third ball battles, and what not. To their credit, the change worked. Clearly.”

But despite not being a fan of Calgary’s tactics, and their soft penalty awards, Elmes gave Foothills full credit for their fighting spirit and for grinding out the victory.

“Coming back from 3-1 down is not an easy thing to do at any given time and they did a good job at it,” Elmes added. “But the game itself wasn’t terribly attractive I don’t think from a football perspective. It was exciting and the home team got a positive result out of it and probably a real boost.”

TSS don’t have long to wait for revenge, with their second PDL match of the new season coming in Calgary on Sunday.

The Rovers travelled with a depleted squad due to injuries, registrations issues, and some players not yet with the team. With Dhillon now out injured, chances to change the starting line-up are limited, but Elmes is confident the day and a half between matches will be ample time to see his young players recuperate.

Wheeldon has already said he needs his team to come out and play the way they did in the second half on Friday. Whether that will just be intensity-wise or whether that means more route one football, we have to wait and see. Whatever it is, Elmes knows it’s going to be a tough match.

“We’re going to have to go to war again here on Sunday,” Elmes said. “We’re hoping that both teams try and play. We’ll have to see how it all unfolds.”