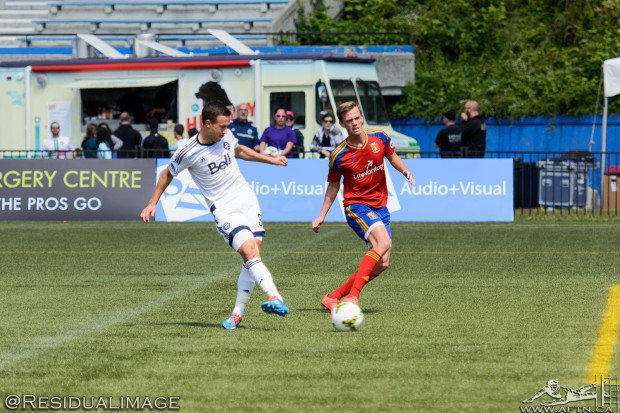 McKendry has been part of the Whitecaps since he was eight years old. First as a fan in the Southside at Swangard, then as a key midfielder in the club’s Residency program, before coming out of college a year early to become Vancouver’s latest MLS homegrown signing in January.

It was a goal that you sensed was coming from McKendry’s recent performances, and he came agonisingly close to grabbing it on a couple of occasions against OKC Energy last weekend.

For a player who often plays more as part of the two man defensive midfield shield, McKendry has a very strong attacking element to his game. He’s very much a box to box midfielder and scored 14 goals (five of them match winners) from his 61 appearances with New Mexico Lobos in NCAA action. 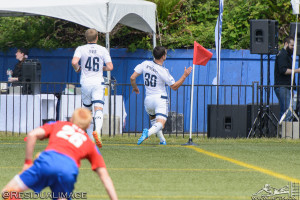 Watching him these past couple of weeks, you could sense his desire to find the back of the net, and now that he has, it’s a weight off his shoulders.

“It’s huge,” McKendry admitted to AFTN after the match. “It’s a bit of a relief to be honest. A little bit of a monkey off the back. I feel like I could probably have had one last week and this week I just wanted to come back with the same mentality and when I got my opportunity I wanted to take it, and I did. Credit to Victor [Blasco] it was a great ball across, and I think [Chris] Serban was also involved on the wing there.”

McKendry has been a staple of the Whitecaps’ USL team this season, starting all nine of their matches and logging the most minutes of the side with 723. He is also second on the team with shots (11) and third with shots on goal (5).

Despite those numbers, McKendry hasn’t been completely happy with how he was playing with WFC2 to begin with.

“I think it was a little bit of a slow start,” McKendry feels about his initial performances with the ‘Caps USL side. “For not only me, but probably the whole group, to the season. But slowly we’ve all gotten better and I think you can see that, especially these last few games. You just got to keep your head down, keep working and things will pay off.”

What’s been interesting to see these last couple of weeks is how well WFC2 have played when it is the core USL group and there’s not been as many MLS players in the line-up, just the regular guys that have been loaned down like McKendry.

The chemistry is much better, and although all the chopping and changing hasn’t been ideal, McKendry sees both the MLS and USL squads as one big, combined unit.

“Obviously it’s not ideal having guys in and out of the group,” McKendry admits. “But you saw Diego [Rodriguez], he came in and he was fantastic I thought. I think we get on well with the USL guys. We hang out off the pitch and stuff and credit to them, they’ve been great about us coming and playing with them.”

WFC2 coach Alan Koch has been pleased with McKendry’s performances of late and delighted to see him get on the scoresheet on Sunday.

“It’s great for Ben to score,” WFC2 coach Alan Koch told us after the win over Real Monarchs SLC. “That should give him a bit of confidence in terms of getting in to the final third. His energy’s always good.

“First half he played probably a little bit higher than we’d like him to but then he found better shape in the second half. But full credit to him. He got the goal and we keep moving forward. He’s played very, very well the last few weeks so it’s nice to see him getting rewarded with scoring the goal.”

McKendry picked up a booking for his celebration after he scored, as he ran to the corner flag and knocked it over. That in itself came as a surprise to him, having done it numerous times before without caution.

“That’s my go to celebration, hitting the flag,” McKendry told us. “I don’t quite understand why I got a booking for that. I’ve never had a yellow for hitting the flag over but that’s ok.” 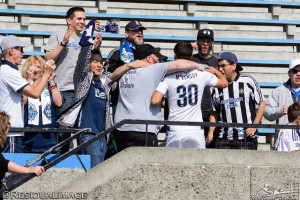 One celebration that didn’t get him in trouble came after the match, when McKendry went into the stands to celebrate with Curva Collective and do their now traditional match winning ‘Humba’, but as Ben explained to us, that in itself has been a long time coming!

“It was brilliant,” McKendry enthused. “I was actually meant to do it the first home game if we won. Again the second home game. Again the third home game. We just kept on tying so today we got the win so I was finally able to do it with Zach [Meisenheimer], which was awesome. It was special.”

Sunday’s goal was just another part of McKendry’s journey with the club. It’s a journey that still has a long way to go, with the next step being minutes with the MLS side.

The Whitecaps had monitored McKendry’s progress closely at New Mexico and ‘Caps coach Carl Robinson has long stated that he is a fan of the 22-year-old, citing the fact that the club offered him a MLS contract and not just a USL deal as an indication of how much.

McKendry has yet to feature in a gameday squad so far this season, not even for the Voyageurs Cup games against Edmonton. That would be the next step but the ultimate goal is to make his MLS debut and earn his first minutes.
It’s a tough midfield to break in to and he has Matias Laba, Russell Teibert and Gershon Koffie ahead of him, with young Honduran Deybi Flores also seeing time on the pitch before him this season.

As frustrating as it must be to sit and bide your time, McKendry knows that how he plays in the USL games will shape how and when Robinson wants to use him and give him his debut. Making the USL ‘Team of the Week’ will help too, and with a tough five game road stretch coming up and with players set to leave on international duty, June and July’s games may give him his chance.

It’s certainly something he’s thought about.

“Yeah, absolutely,” McKendry says. “Of course that’s what you’re working towards. I’m happy to be getting minutes here and I’m just going to keep working and good things will come.”

The man that holds the answer to when McKendry will get his chance on the MLS stage is obviously Robinson, but the ‘Caps coach is happy with what he’s seen from the Residency alumni in both training and USL play and hinted that that chance may come soon.

“He is [pushing for minutes],” Robinson told reporters at training on Tuesday. “He’s getting better and better each week. The last two weeks have been excellent for him, they really have. Last week’s game in the USL was excellent and he produced another one on Sunday.

“You see him in training, he’s getting used to playing with our first team group of players and looking stronger. With the games coming up, I’m sure he’ll get his minutes, but it’ll be because he deserves them. If they’re not ready, I’ll won’t put them in. If they are ready, and they deserve them, then they’ll get their minutes and Benny’s certainly knocking on my door.”