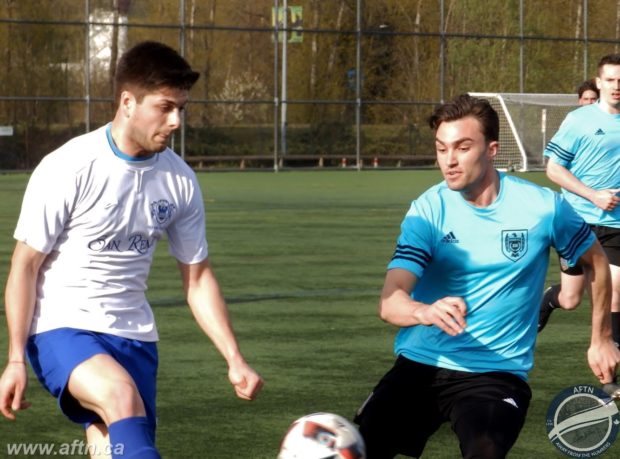 Eight teams remain in this year’s BC Keith Millar Provincial B Cup after an action packed weekend that saw a lot of drama and a lot of goals, 34 of them to be precise.

All five leagues will be represented in the quarter-finals. The Vancouver, Richmond, and Burnaby leagues each have two teams still representing, with the Island and Fraser Valley having one side left standing.

The action got underway at Friday night at Hugh Boyd in Richmond with a clash between two RASA teams – champions Westcoast United and Graduates FC. The four previous meetings this season saw both sides get wins, so it was no surprise that this turned out to be a close affair between two teams that know each other so well. In the end, it was the champs from Westcoast who advanced with a 1-0 win.

They’re joined in the second round by another RASA side, previous B Cup winners Richmond All Blacks. After stunning defending champions Vancouver Greencaps in last week’s Preliminary Round, they headed to the island on Saturday afternoon for a tough test against a high scoring Gorge-Us Guys team that had 57 goals to their name this season.

Unsurprisingly the goals flowed, and the islanders looked to be cruising when they went in at half time with a 2-0, having also rattled the crossbar. But Richmond came storming back in the second half with three goals to run out 3-2 winners. Nan Yang grabbed a brace, with Zac Bowman getting the deciding goal with a long range screamer with around 15 minutes remaining.

Saturday was a busy day for B Cup matches this past weekend and the Matsqui Recreation Centre played host to a FVSL v VMSL battle between Abbotsford United B and Vancouver Strikers. Abbotsford led 1-0 at the half, but the VMSL side fought back in the second, banging in a pair of goals in the last six minutes for the 2-1 victory thanks to a last minute winner.

Their reward is a trip to Richmond on Friday night for a quarter-final match up at High Boyd against Westcoast (kick off is 9pm).

It was a good day for Burnaby teams, with two BMSL side advancing to the last eight following victories over two VMSL teams.

Sierra SC beat Gastown FC 2-0 on the Point Grey Turf and the league is guaranteed one representative in the semi-finals after BMSL champs Impero Calcio advanced to set up a meeting of the two Burnaby teams in the next round.

We headed to Burnaby Lake on Saturday evening for Impero’s clash with VMSL side 13th Legion, and what an entertaining and eventful game that turned out to be. Seven goals, some contentious calls, and five sending offs for the Legion (three players and two coaches) as they went down 4-3. Cup football. Love it! 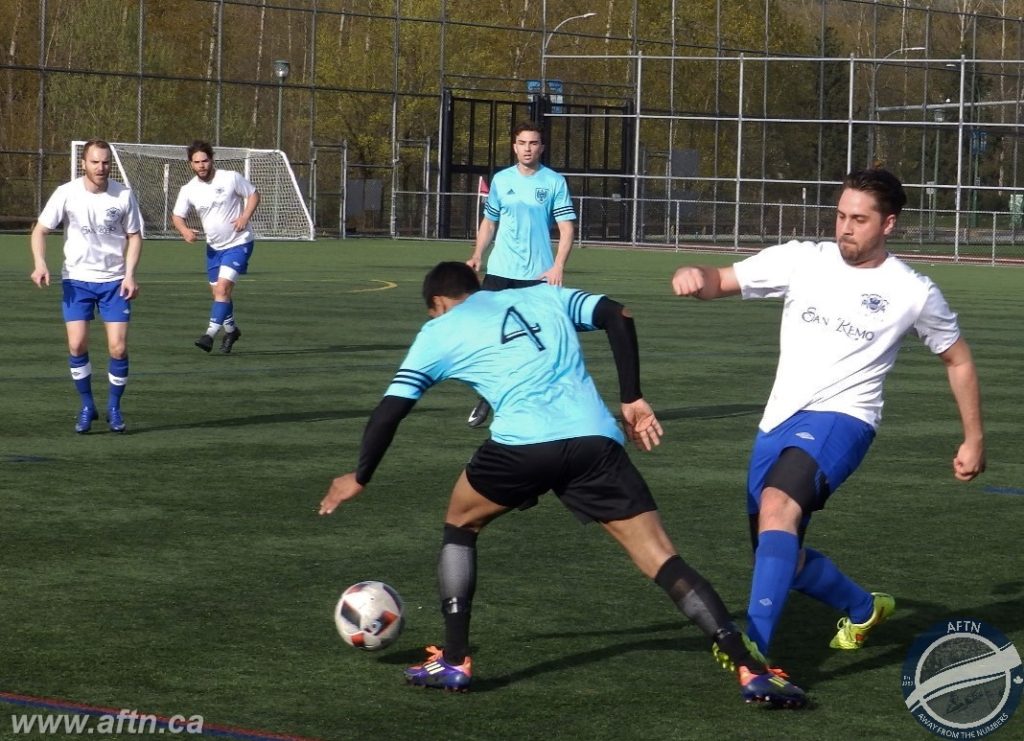 Impero won the treble in the Burnaby League this season and it only took them six minutes to get their Provincial Cup campaign off and running when Bruno Teixeira tucked away a penalty after a Legion handball in the box.

It was an entertaining match, with the action going from end to end, and it wasn’t long for more goals to start coming. Impero’s Lucas Sweda was looking particularly dangerous every time he was on the ball, along with Teixeira, and he made it 2-0 in the 14th minute when he tucked away a low Anton Krapic ball to the near post.

Legion were stunned but they pulled themselves together and pulled a goal back three minutes later, heading home a corner.

You felt the next goal could be crucial and Impero were having the better chances to get it. They added two in quick succession just past the hour mark, the first when Teixeira poked home a loose ball in the box after the VMSL side failed to clear a free kick and then Sweda hit the goal of the game, firing home a belter into the postage stamp corner to give the Burnaby boys what you thought was an unassailable lead. 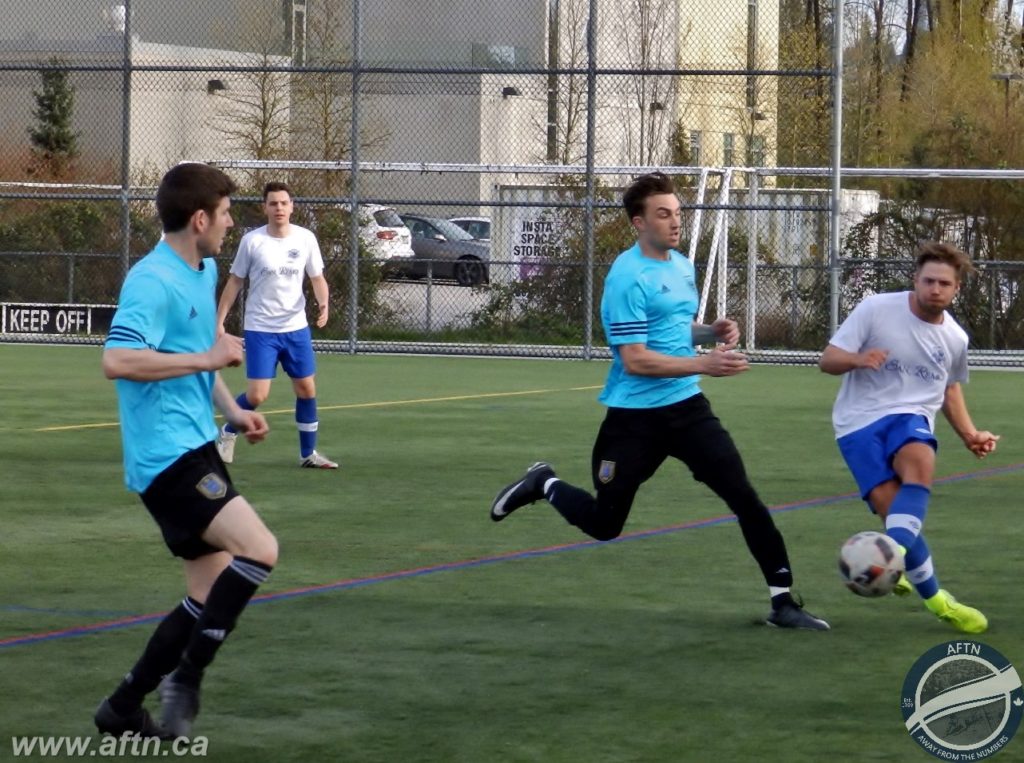 The Legion weren’t done yet though and scored either side of half time to make a game of it, the first from the spot in the 41st minute and then reacting quickest to a rebound from a save off a free kick in the 51st.

13th Legion felt they should have had a penalty following a shoulder charge in the box with 11 minutes remaining. The ref ruled fair challenge, much to the anger of their bench, which ended with one of their assistants being sent off. The Legion’s discipline then left them in the last 10 minutes.

A fierce tackle in the 81st minute led to a coming together of the teams, and a double sending off for the VMSL side, one for the tackle and one presumably for dissent.

Four minutes later and 13th Legion were down to eight men after an off the ball reaction to a collision. Again the teams came together and the Legion coach came onto the pitch to try and keep the players apart, earning a sending off himself for his efforts.

Credit to 13th Legion though. Their eight men kept pushing till the end and had a couple of late half chances to grab the unlikeliest of equalisers. It wasn’t to be and Impero move into the quarter-finals to play Sierra SC, the team that finished just three points back of them in the league. It should be a cracker at Burnaby Lake on Saturday morning. Kick off is 11.30am.

You can see our video highlights of the match below. Probably not suitable for work if you work with sensitive souls that don’t like swearing!

The final two first round matches took place on Sunday.

Over on the Island, VISL Division 3A champions Powell River Villa came through a close one with the FVSL’s Fraser Valley Blue Devils 2-1, needing extra time to get the job done, while ten man VMSL Division 2A champs Coquitlam Metro Ford Lupi showed their class with an impressive 6-2 win over FVSL surprise package Mission SC.

Mission took the lead before Coquitlam wrapped things up and then got a red card just before half time. League and Cup double winners Lupi had lost only one game all season. Could the shock be on? Well, no as it turned out. Mission had some early pressure to start the second half but Metro Ford took over and hit five goals, before the visitors got some late consolation.

All that sets up some tasty looking quarter-final match ups this weekend. We’ll bring you our preview later in the week, but for now you can find all the fixtures and results on the BC Soccer website.