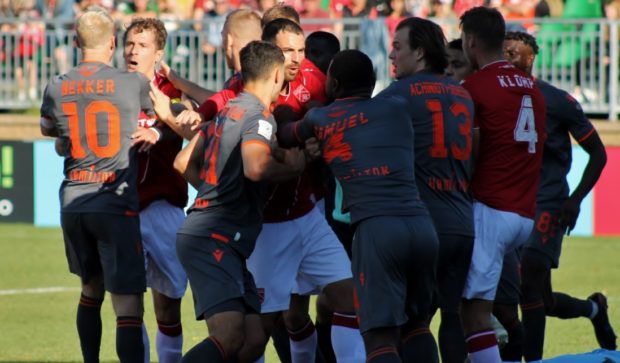 It’s all still to play for.

Cavalry FC and Forge FC held each other to a 1-1 draw at Spruce Meadows on Oct. 15, in the first of their two-legged Canadian Premier League (CPL) semi-final series.

Though the hosts didn’t come away with the momentum of an all-important win as they prepare for a rendezvous with Forge next weekend, Cavalry FC head coach Tommy Wheeldon Jr. said it was overall a solid team performance – particularly defensively.

“I think it’s important in a two-legged affair that it doesn’t get too lopsided too early, because it changes the narrative,” he said. “Now it’s just ‘win-and-we’re-in’ in their house. That’s where the game was always going to be decided. It was important that it was close.

“We had our chances and didn’t take them, but I think we cancelled each other out.” 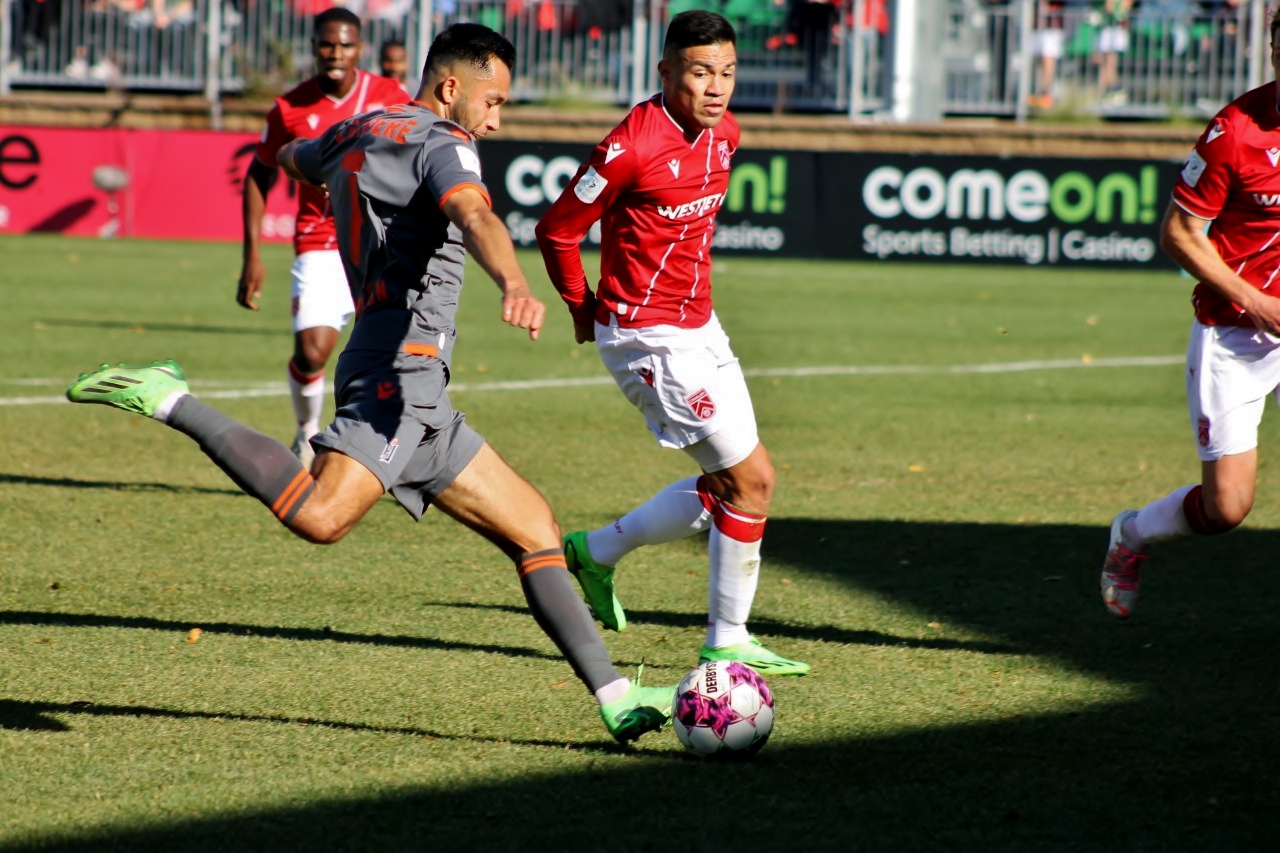 Forge FC started the proceedings on the front foot, and the Hamiltonians nearly took an early lead after Alexander Achinioti-Jönsson struck the ball off the crossbar in just the second minute of the match.

Cavalry’s first chance of the game came 12 minutes later, when Mason Trafford headed a near-post corner kick from Roberto Alarcón over the bar.

Striker Joe Mason had a similar chance for Cavalry in the 24th, heading a cross from José Escalante into Forge goalkeeper Triston Henry’s hands.

While the Hamiltonians controlled most of the run of play and boasted 66 per cent of possession in the first half, it was the hosts that struck first. Daan Klomp headed home a right-sided cross from Mason in the 42nd minute to cap off a successful counter-attack that put Cavalry up 1-0.

“Possession is only part of the tale,” Wheeldon Jr. said. “It’s what you do with it that counts. I think we had bigger chances. They got drunk on possession, that’s part of their style.” 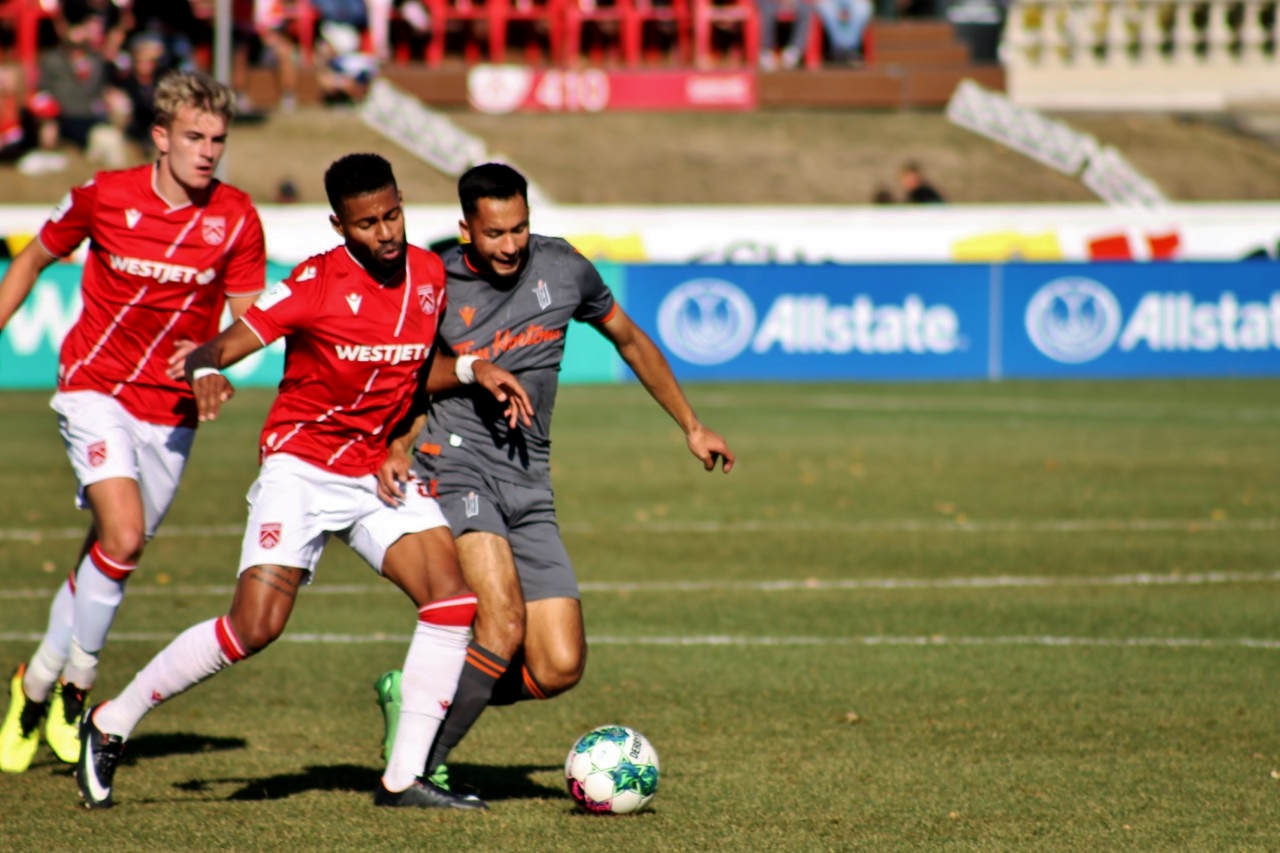 But Forge responded positively, equalizing just a minute into the second half. Woobens Pacius placed a header past Marco Carducci off a pinpoint freekick cross from Kyle Becker, who was an easy pick for man of the match.

The goal broke a two-month scoring drought for Pacius, who despite being Forge’s top scorer with 11 this season, hadn’t found the net in the CPL since the team’s 1-0 win over HFX Wanderers on Aug. 6.

“I thought we were brilliant in moments,” said Forge head coach Bobby Smyrniotis. “We got into deep positions that we usually get into to give us a high percentage of [getting chances on goal], so we just needed to continue that. We’ve been here twice before this year, and we’ve gone down in the match and been able to bring back the score.”

Smyrniotis said the message in the dressing room at half time to his players was to just continue doing what they were doing. 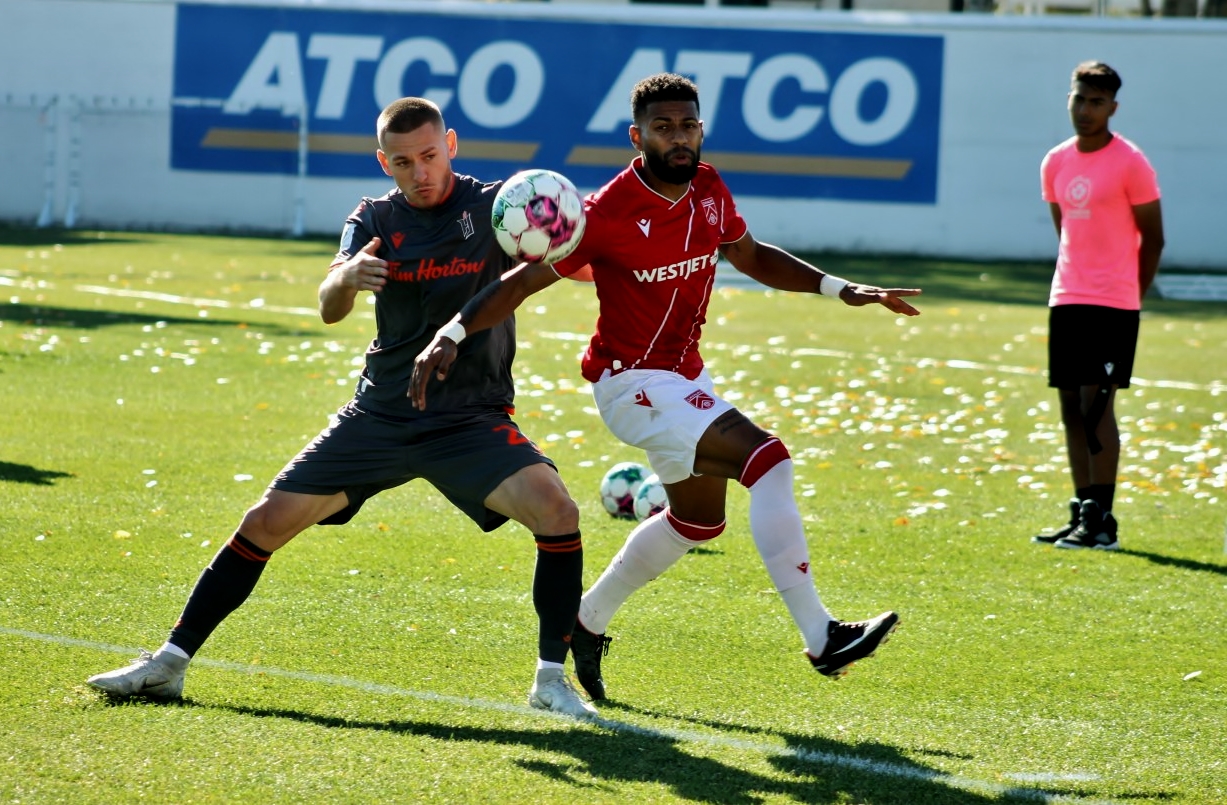 “It’s obviously excellent to get that tying goal to start the half early on,” he said. “That settles things a little bit, because when you look at playoff games, it’s all about the little details. There’s always a bit of nerves. I think it was very good for us, that early goal in the second half. Both teams had some good chances in the second half.”

As usual when these two teams play, the ongoing rivalry between Cavalry and Forge was on full display in the second half, as the fouls started to tick upward. The feistiest moment of the match came in a scuffle between players after Cavalry’s Mason Trafford kicked Forge goalkeeper Triston Henry when going for the ball. 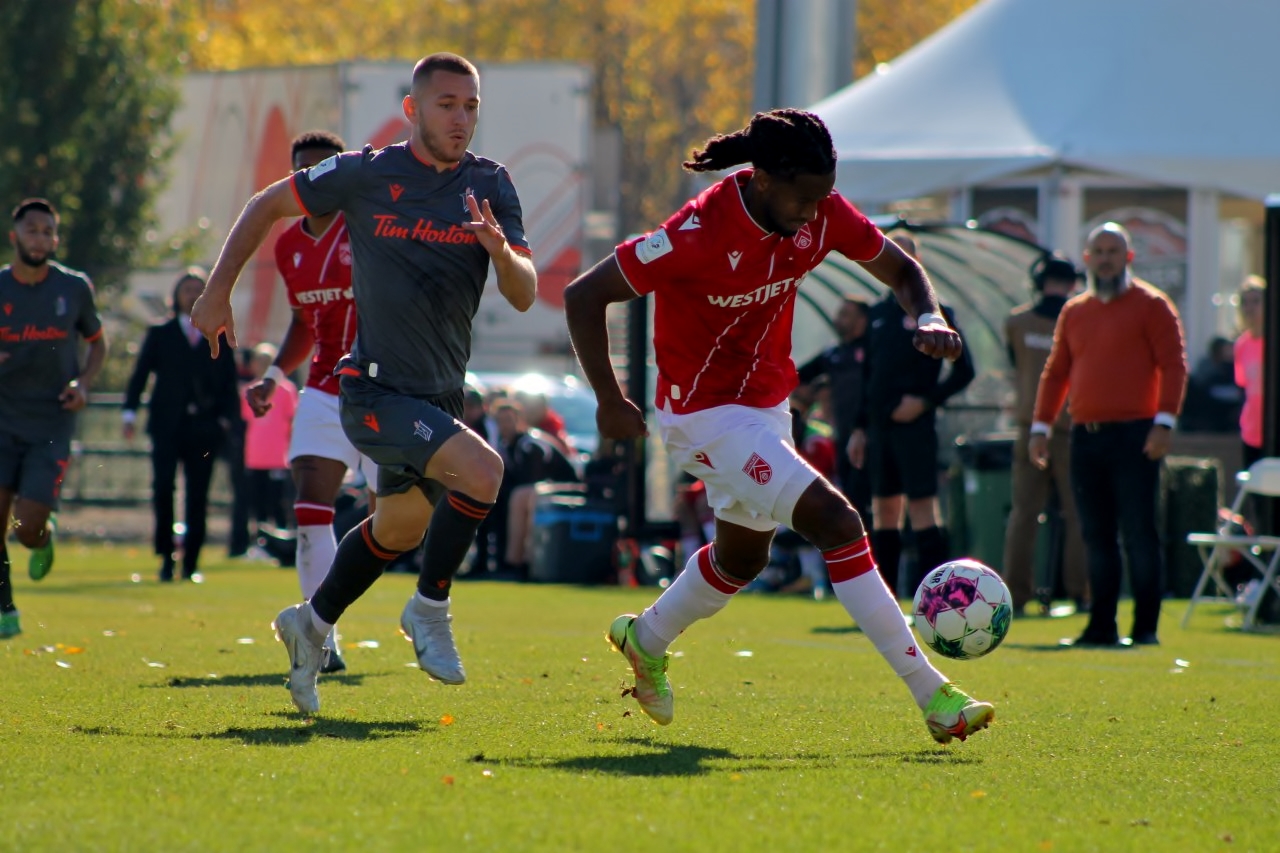 “You have to be [positive],” Wheeldon Jr. said. “We didn’t lose the game and we’re still in the game. We’ve got 90 minutes more to go win the game. Forge are a very good team, but they’re beatable. To have 90 minutes of playing our way in their house, the pressure is on them. It was a decent performance, we defended absolutely brilliant, and we had some exciting attacks.”

The two teams will face each other for the sixth and final time this season when they resume the series in Hamilton on Oct. 23. The Sunday afternoon match gets underway at 3 p.m. MST.

“It’s not an easy place to go, but we actually, strangely, like to go there,” Wheeldon Jr. said. “It’s a bigger pitch, it’s wide open, and one of the better turf pitches in the league. The pressure is on them now, because they’re expected to beat us in their home. It flips the switch and we look forward to it.” 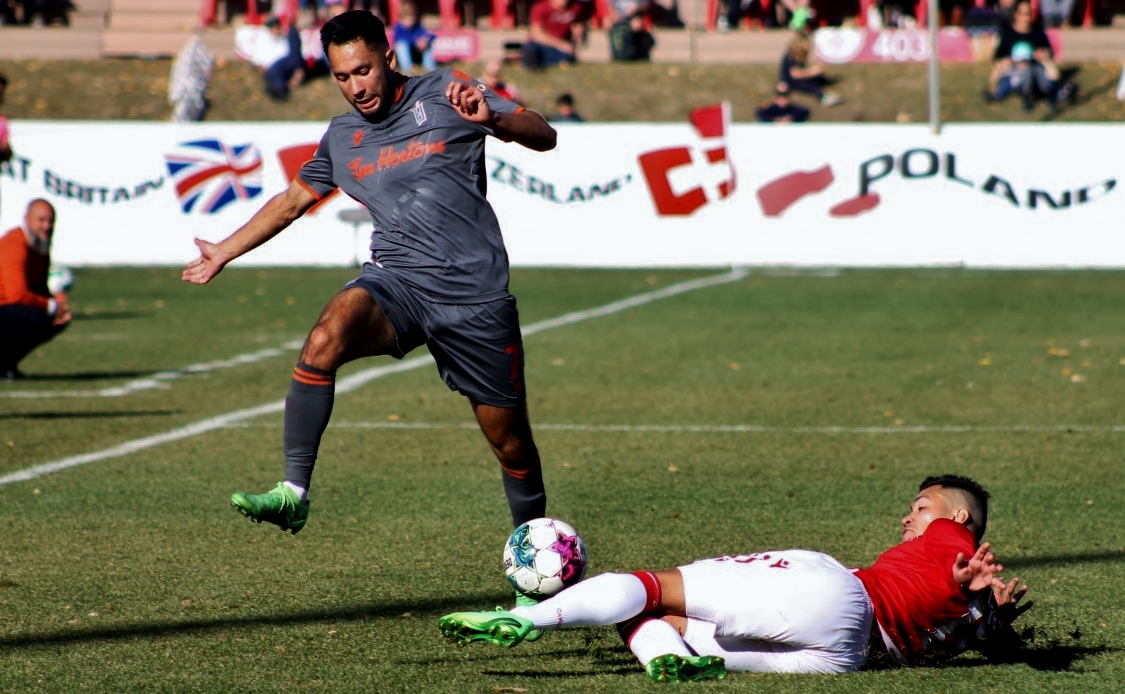