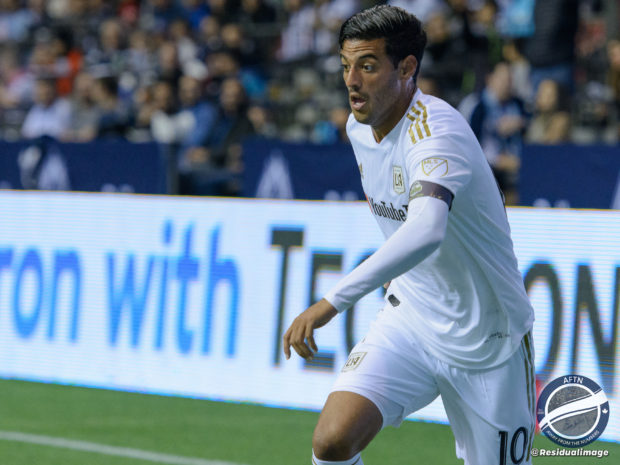 When Carlos Vela was announced as Los Angeles FC’s first ever Designated Player in August of last year, it was a statement of intent from the expansion club.

Vela was heading to LA and Major League Soccer with an excellent pedigree, still in his prime, and looking to feature in this year’s World Cup in Russia with Mexico. It was an excellent signing. The kind you wish the Whitecaps could afford and deliver.

The 29-year-old hopes to call LA home for a while, following a professional career that has seen him play in the English Premier League with Arsenal and West Brom, and in La Liga with Ossasuna and Real Sociedad. His impact has been immediate, with four goals and two assists in his first five MLS matches. It’s been a smooth transition.

“I’m really happy to be here,” Vela said after LA’s win over the Whitecaps on Friday night. “It’s a competitive league and I am here to help the league be better. I’m working hard to show every game I’m a good player and I am trying to be the best in this league. So I work [hard] and I hope I can show that every game.”

Vela may be here to help make the league better and he’s also hoping the new challenges ahead make him a better player in return, just as La Liga did, where he had 72 goals across all competitions for Real Sociedad and had a combined total of 105 goals and assists over the last seven seasons.

“It’s a strong league,” Vela mused. “Everybody is really prepared to run, to fight. It’s strong and if you don’t work and if you don’t prepare your body and your mind to play well, it’s difficult to play. I’m happy. The league is helping me to be a better player and I hope this season I can do great things for my team.”

So far he is, playing every minute of every match and impressing head coach Bob Bradley.

“Carlos is still a player who, at any moment of the game, can take a ball, go by people,” Bradley said of his striker. “His ability when he gets closer to the goal in terms of his finishing with his left foot and within our team in terms of the quality he brings every day. His personality, his professionalism, has been so important in the way he’s come in and embraced everybody.”

Vela has also struck up a deadly striking partnership with fellow DP, 20-year-old Uruguayan Diego Rossi. The pair have eight goals, four apiece, and six assists between them through the first five games. Both scored against Vancouver on Friday and you feel they’re only just warming up.

“I feel a really good link with him,” Vela said of his partnership with Rossi so far. “We are Latin players, we are similar players, and we understand how we are and how we play. It’s easy to play with Diego, with Marco [Urena], with Benny [Feilheiber]. We understand the same football and it’s easy for us to play [together].

“We know when we are winning and have the possession, we always have the chance to create because we have quick strikers. That’s important for us. We always have to be in a good position to be strong at the back, then we have space and we have chances, we are a real dangerous team.” 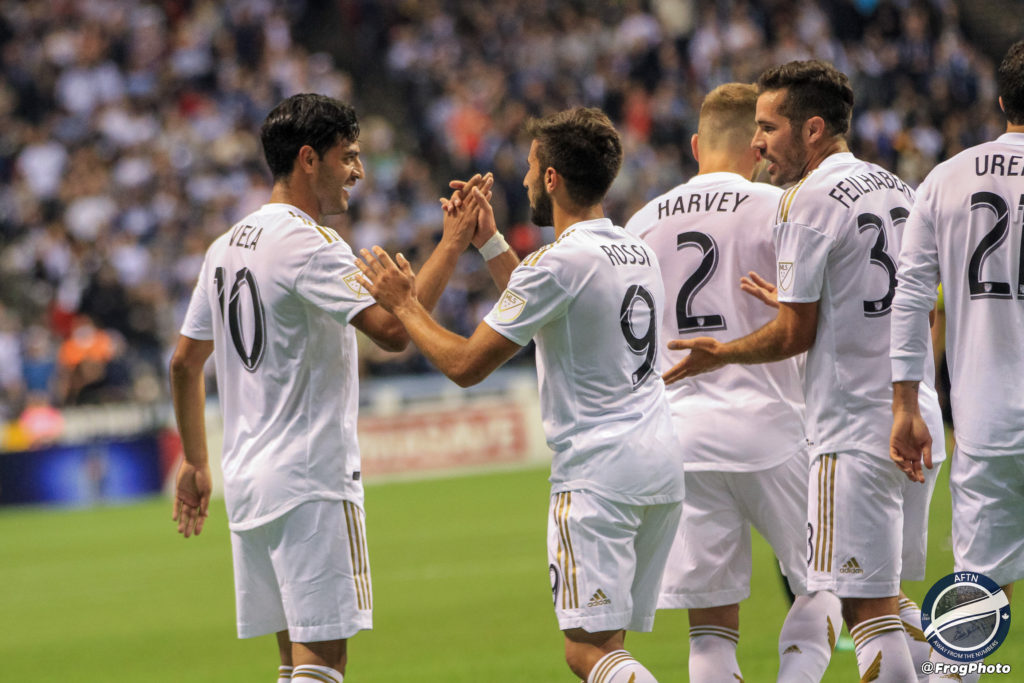 Vela ran the show in the second half at BC Place on Friday night, scoring a curling beauty in the 59th minute to open the scoring, as the Whitecaps defence just stood and watched. Knowing his talent and what he’s capable of, a surprise, even for the player himself.

“They are really a strong team at the back,” Vela said. “You expect not to have a lot of space to create your chances or shoot, but for me it’s good. If you let me have space, I can think and I can prepare my shot.”

It’s been a solid start to LAFC’s first season in the league. They currently sit four in the West, one point behind the Whitecaps but having played two games less.

There’s been a couple of speedbumps along the way, one in the shape of a 6’5” Swede, but Friday’s win put an end to LA’s two game losing streak, handing Vancouver their own one for the first time in 40 matches.

After giving up nine goals in their last three halfs of football, having both of their main strikers scoring and keeping the clean sheet was the perfect response for the black and gold.

“I think it was a big game for us,” Vela said of the ‘Caps match. “We talked about it this week, and how we had to change something. We lost 5-0. We lost one game when leading 3-0. We did something wrong in the past. We talked about we have to defend better. We have to be a team. We have to be compact. And then, up front, we have good players and we have to take our chances, and we did it, so that’s nice.”

And it was clear they had done their homework on how to negate the Whitecaps at home.

“We know they play really direct football,” was Vela’s view on Vancouver. “We worked to try to press, to try to play really easy, and then we played as a team. That’s important. When you play on the road, you have to be a strong team, a tough team. And we do it. Then we had three or four chances and we took two, so it was a good win.” 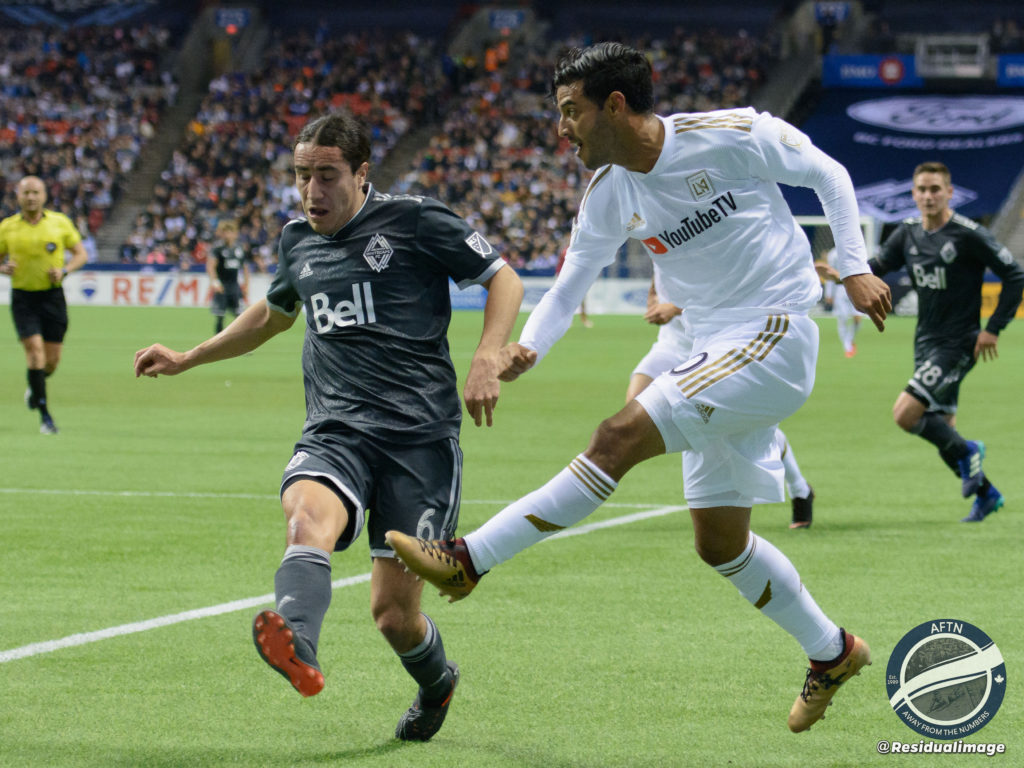 The pair have known each other for a long time and were part of the Mexican teams that won the 2005 FIFA U17 World Cup, where Vela won the Golden Boot, and the 2009 Gold Cup.

Their footballing careers may have taken them to different continents, but their paths have crossed once again here in MLS.

“He is a good friend,” Vela said. “We played in the national team under 17 team. A long time [ago]. I was happy to see him again because when you are playing in Europe and he is in Mexico, you lose a little bit of that communication and it’s difficult. Now, we can talk.

“I always follow my teammates, my friends. It’s the only way I can be in touch. When he’s playing good, I’m happy.”

Vela has been in and out of the Mexican national team these past few seasons, but featured in nine of their ten group games in the Hex during the recent World Cup qualifiers, scoring against the US and Honduras. He’s now looking forward to representing his country in Russia this summer, but he’s not looking too far ahead and knows his form with LAFC could play an important part him achieving that dream.

“It’s a great year for me,” Vela enthused. “I’m working hard first to do well with LAFC and then if I do well here, I have a chance to go to World Cup and help Mexico.”