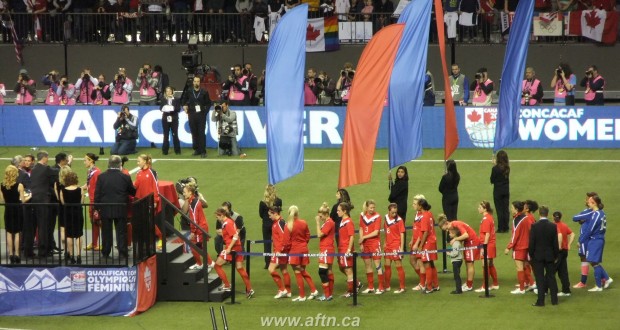 Today’s Olympic Qualifying “final”, was to all intense and purposes a glorified friendly. When Canada meets America at any sport, at any level, there’s always something at stake.

Canadian fans went into this match more in hope, than expectation. By the end of it, it became clear just how much work the team still need to do to move up to the top level.

Despite Canada dominating the early proceedings, it only took four minutes for the US to get on the scoresheet.

Abby Wambach played a perfect ball through to Alex Morgan, who outpaced and out-muscled Shannon Woeller and Candace Chapmen, before easily slotting past Erin McLeod, who got the surprise start in the Canadian goal ahead of Karina Leblanc.

If you thought this was a sign that the floodgates were about to open for the Canadian girls, then far from it.

They dusted themselves off and went back to taking the game to the US, tackling hard and controlling possession.

A free kick deep to the back post had Hope Solo scrambling in the 15th minute. Two minutes later and Canada came the closest yet to restoring parity.

Christine Sinclair played in Christina Julien, but her control let her down and Solo came out to block, but not before taking a kick and spilling the ball, as the American defence cleared the danger.

Solo was soon scrambling again when a cross from the left carried under her crossbar and she had to palm away, as Sophie Schmidt closed in.

Canada were made to pay for not taking their chances.

Kelley O’Hara fired over from just inside the box, before Wambach doubled the US lead in the 24th minute.

Megan Rapinoe surged forward, and set Morgan free on the right. The American goalscorer ghosted past the Canadian defence, hit the byeline and sent in a perfect cross to the head of Wambach, who finished clinically past McLeod in the Canadian goal.

It was Wambach’s fifth goal of the tournament and her 130th international goal, moving her to joint second highest international scorer of all time.

Four minutes later and she claimed that second spot on her own.

A long range strike from Carli Lloyd cannoned off the right hand post, straight into the path of Morgan, who cut inside for Wambach to easily finish.

3-0 to the US and a rout was starting to look on the cards.

Again, Canada fought back, and they should have reduced the deficit a minute before half time.

Kelly Parker sent a defence splitting ball through to Julien, and again she was unable to finish, taking too long and allowing Solo to come out and block, with the rebound hitting off Julien for an American goal kick.

It was a chance which would have sent the Canadians in on a high. Instead, it’s impossible not to wonder what would have happened had Julien’s two chances fallen instead to Sinclair, or even Melissa Tancredi, who was on the bench for this game.

Julien was maybe still feeling the effects of a disgraceful off the ball, punch in the kidneys from the US’ Rapinoe a few minutes earlier.

It was the last chance of the half, and the US went in three goals up and showing the difference that taking your chances makes.

Canada had made three changes from Friday’s winning starting line-up and made one substitution at the break, with Tancredi coming on for the booked Kaylyn Kyle.

The Canadian girls came out to a rapturous welcome for the second half and immediately went on the offensive, and although both teams had half chances, neither goalkeeper was being tested.

The US made it four in the 56th minute, with the goal of the game.

A long punt upfield saw Woeller slipping and allowing Morgan to sprint free and bare down on goal. Despite pressure from Rhian Wilkinson and Woeller tracking back, and McLeod coming out to try and dispossess, Morgan was not letting ball away from her feet and twisted and turned clear before firing into an empty net.

The crowd, and the players, were looking for a consolation goal, but America were still keen to add to their tally and McLeod produced a stretching save to deny Lauren Cheney in the 74th minute.

Cheney had another chance to make it five, in the 78th minute, heading narrowly wide.

Both sides pushed for goals in the closing minutes, but none came and 4-0 it was to finish.

As the final whistle sounded, the Canadian girls will feel a little downhearted but they shouldn’t. They did themselves and their country proud and achieved what they set out to do.

A win against the Yanks might have been the cherry on top, but it was a mighty fine cake they served up throughout the rest of the tournament.

It was a brave try from Canada but the gulf between 1st and 7th in the world was very clear to see. I would liken the game to watching a FA Cup tie where the plucky lower league minnows take the game to their more illustrious visitors but ultimately pay the price for the lack of overall quality in their team.

If Canada want to see their women’s team progress then they need to put more investment into not only developing their current players, and those of the future, but making sure none of them slip through the net and go and pledge their allegiance elsewhere.

The tournament may have ended on a slightly sour note for Canada, but with another record crowd of 25,427, the tournament has been a clear success on, and off the field.

Canada are heading to the Olympics. That was the overall goal, and they achieved it in some style.

They may not come home with gold, but you certainly get the feeling that with this group of players and under the tutelage of John Herdman, there are going to be making one hell of a spirited fight of it, and a medal of some kind is a distinct possibility.

It’s been an oft used term in this tournament, and I’m sure we’ll hear it a lot again, but you know this group won’t leave one ounce of Canadian out on that pitch in London come the summer.

Good luck to them. Do your country proud, once more. 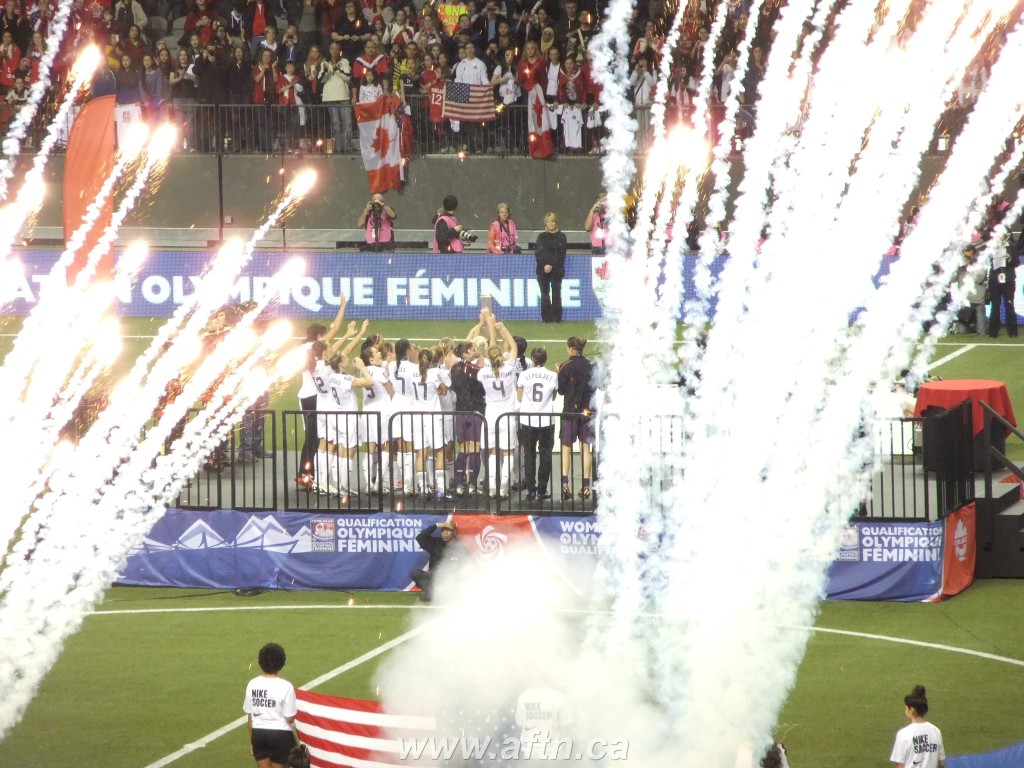