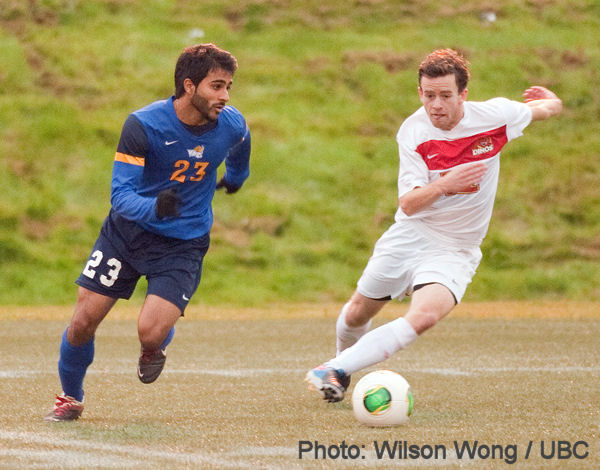 The Canada West Final Six tournament kicked off at UBC’s Thunderbird Stadium this afternoon, with the two quarter final matches seeing Fraser Valley and Victoria advancing to make it three British Columbia universities battling it out in the semis.

The UFV Cascades came through a tough encounter for a late 1-0 win, whilst UVic Vikes dominated against Calgary but needed extra time before finally running out 2-1 winners.

The first game of the afternoon kicked off at 1pm between the University of Fraser Valley Cascades and the University of Alberta Golden Bears and it took an 86th minute winner from Whitecaps PDL player Colton O’Neill to break the deadlock and send the Cascades through to a semi final match up with UBC Thunderbirds. 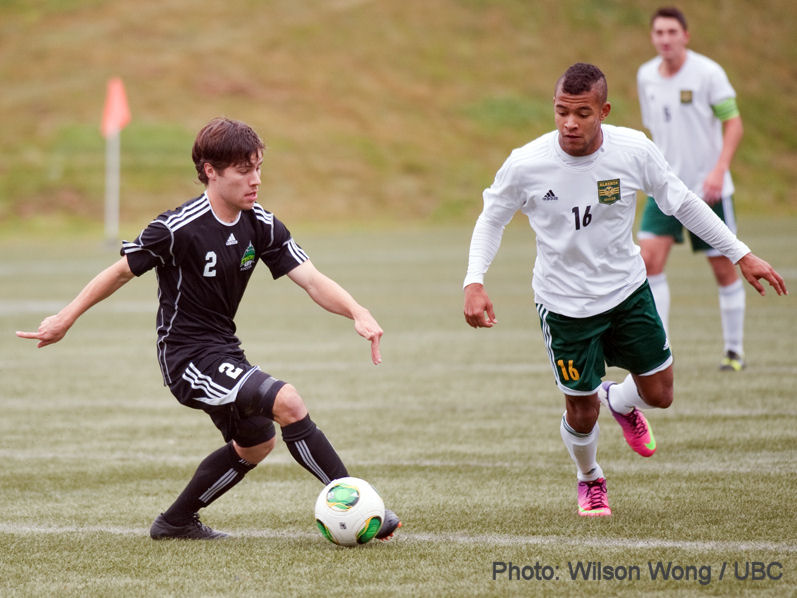 Alberta, who finished second in the Prairie Division, started the first half well but UFV soon started to find their game and had the best chances. Ravi Singh forced a good save from Alberta keeper Jay Vetsch and Ethan Claibourne-Collins had a good shot go over. With seconds of the first half remaining, Colton O’Neill just failed to get on the end of a dangerous ball across goal and the teams went in level.

The Cascades continued where they left off in the second half and Claibourne-Collins had a great chance to open the scoring in the 55th minute when he was put through but could only look on as Vetsch saved the first shot and he put the rebound wide.

Alberta went up the pitch and had their best chance of the game so far when Marcus Johnstone streaked clear but drilled his shot at the legs of UFV keeper Mark Village.

Jermele Campbell headed off the line as Fraser Valley pushed but Alberta should have gone ahead in the 84th minute when they wasted a two on one break Ryan Liddiard snuffed out the danger.

They were made to pay two minutes later when Fraser Valley scored the winner when Josh Brown sent in a cross from the left and O’Neill was at the back post to slot home and send the Cascades through to a semi final meeting tomorrow evening against number one seeds UBC.

The second game of the afternoon saw the University of Victoria Vikes take on Calgary Dinos, as they attempted to make it a BC semi final hat trick.

Despite dominating throughout, it took them an extra 30 minutes to finally see off the Dinos. A Gavin Barrett double being the difference in a 2-1 victory, that saw an inspired display from Calgary keeper Jordan Unreiner.

Vikes goalkeeper Elliot Mitrou stood tall to block a Izak Lawrence shot in the opening minutes and Victoria had their first chance of the game two minutes later when Sam Prette curled a spectacular effort off the crossbar, with the Dinos beaten.

UVic had chances from Craig Gorman and Alex Redpath saved before Calgary had their own woodwork woes on the half hour mark when Lawrence’s blocked shot looped over the head of Mitrou and off the left post in a rare foray forward.

Whitecaps PDL player Cam Hundal was played through in the 34th minute but Unreiner pulled off a great save and repeated the feat moments later from Gorman, as the Vikes pushed for the opener.

Victoria pushed and pushed but couldn’t find a way past the Dinos keeper, who turned a Prette shot around for a corner and made a goalline stop in the closing minutes of the half following a scramble in the box.

The action dipped in the second half, but UVic still dominated and had a double chance in the 65th minute that they just couldn’t put away.

The Vikes finally got their breakthrough in the 75th minute and it came from a set piece, with Barrett rising well to head home a free kick in from the left.

Victoria tried to kill the game off and were looking comfortable but Calgary equalised from nowhere with three minutes remaining when Kieran Hay headed home a Kieran Lane-Oppenheim cross to force extra time.

With no scoring and little of note in the first half of extra time, Victoria came out all guns blazing for the final fifteen. Cameron Stokes forced a save from Unreiner a minute in from a fierce free kick, before Barrett’s cross-come-shot was just tipped away.

UVic pressed and Hundal nearly put away a Prette pass but Unreiner’s leg save forced a corner.

Victoria retook the lead from the resultant corner, which originally crashed off the bar before Barrett grabbed his second of the game with a looping header that gave Unreiner no chance in the 112th minute.

The Vikes looked to kill the game off this time but once again found ‘man of the match’ Unreiner in the way, with the keeper producing a spectacular one handed save to turn over a Dominic Colantonio drive.

Calgary nearly grabbed another late equaliser but Victoria held on for the win and tough game with the winners of the Prairie Division.

Both semi finals will take place at Thunderbird Stadium on Friday, with Saskatchewan Huskies taking on UVic at 4.30pm, followed by the all British Columbia clash between UBC and Fraser Valley at 7pm.

Admission is $15 and covers both games.