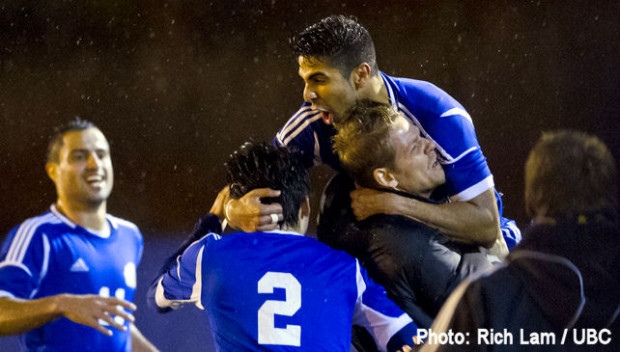 Sunday’s CIS Canada West Championship game will not be an all BC affair after it was the number one seeded UBC Thunderbirds and the Saskatchewan Huskies who came through their semi finals Friday in two hotly contested games that had action galore and even a streaker!

Saskatchewan were looking down and out before hitting an 83rd minute equaliser and going on to win 2-1 in extra time, with the winning goal coming from Victoria Highlander, and Whitecaps trialist, Brett Levis.

They will now meet UBC in the Championship game after the hosts and defending CIS champions came through a tough test against the only team to have beaten them this year, Fraser Valley. A goal in each half from Whitecaps PDL player Harry Lakhan getting the job done.

There was little to separate the teams in the opening stages but Victoria took the lead in the 21st minute when Craig Gorman headed home a Cam Hundal cross.

Saskatchewan should have grabbed an equaliser seven minutes later when Mitch Bauche hit the byeline and cut back a dangerous ball to Luigi Bekwayo four yards out, but the midfielder could only slice his effort over under pressure from a defender.

Gorman nearly grabbed his second when he got on the end of an Andrew Ravenhill cross in the 32nd minute but couldn’t get his header on target.

Vikes keeper Elliot Mitrou came up big for his side with three minutes of the half remaining to keep out Bobbi Nicholat and send Victoria in with a half time lead.

Gorman was played in five minutes into the second half but could only put his effort just wide of the left post from a tight angle.

Saskatchewan made a game of it and did a lot of pressing but neither side was posing too much danger, with Cameron Stokes coming closest when he had a dipping shot tipped over in the 77th minute.

The Huskies turned up the pressure and got their reward with seven minutes remaining. David Brown showed some tremendous footwork in the box to waltz past several Victoria defenders, but just when it looked like he may have taken it too far, he cut the ball across from Nicholat to poke it home from close range and force extra time.

After fighting back it only took three minutes of the extra period for Saskatchewan to take the lead and grab what turned out to be the winning goal.

The Huskies pounced on a horrible attempted Vikes backpass in the slippery conditions and Brett Levis coolly slotted past Mitrou.

Victoria pushed hard to get back on level terms and Bobby Eng could only look on in disbelief as his two sweetly struck shots, either side of extra time half time, were brilliantly turned over from Michal Bandula in the Huskies goal.

Levis nearly put the game out of sight for Saskatchewan in the 108th minute but his shot crashed off the left post and Mitrou pulled off an amazing point blank save from the rebound.

A frantic final 15 minutes came to an end when the Vikes’ David Brown was sent off for a late lunge at keeper Bandula in the last action of the match.

Saskatchewan’s win means that the Huskies have secured a place at next week’s CIS national championships in New Brunswick.

Milad Mehrabi had the ball in the net for UBC in the 9th minute when he headed home a deep free kick but was flagged offside.

There was controversy in the 13th minute when Ryan Liddiard’s 25 yard free kick crashed off the left hand post and seemed to get past Richard Meister and over the line in the wet conditions before being cleared, but no goal was given, much to the Cascades fury.

Play was racing from end to end and Mehrabi had a fierce shot from just outside the box tipped over by Mark Village 20 minutes in.

The pace continued but it took a freak goal for UBC to open the scoring in the 36th minute.

Whitecaps PDL player Harry Lakhan played a long free kick deep into the Fraser Valley box, which took a bounce, eluded everyone and ended up in the net.

The action dropped a bit in the second half but Sean Einarsson had a great chance to double UBC’s lead on the hour mark with a long range shot that just zipped past the post.

Things were then livened up with a streaker in the 62nd minute who was last seen heading naked out of the stadium onto campus!

Fraser Valley really went for it in the last 20 minutes, peppering the Thunderbirds goal with shots and forcing corners, but they were unable to find a way through.

As the game headed into stoppage time, Canada West MVP Reynold Stewart streaked up the left wing and sent in a perfect ball to an unmarked Lakhan, who made no mistake in hitting home from ten yards and send the Thunderbirds back into the Canada West Championship game and the defending champions back to the nationals.

Fraser Valley will now take on Victoria in the bronze medal game at 11am, with the Championship game between UBC and Saskatchewan kicking off at 1pm.

Get out to Thunderbird Stadium if you can, support local football and see some of the best young players in BC in the process.