The Vancouver Metro Soccer League (VMSL) is back for the 2022/23 season, with the traditional Premier League opening weekend festivities taking place at Newton Athletic Park in Surrey on Saturday.

All 12 teams were in action at Newton, and not a draw in sight, with the six games producing 23 goals and some close contests.

The action got underway with a pair of games at noon.

The big winners of the afternoon were BCT Rovers Hurricanes, who came away with a 5-1 victory over Coastal FC. Rahid Rahiem returned from a strong League1 BC season with Unity FC to score a brace for the Hurricanes, with Akash Sharma, Javid Khan, and Pavi Dhillon also on the scoresheet for the Surrey side. Sean Northcote got the lone counter for Coastal.

While that game was playing out, it was a much closer affair between VMSL Imperial Cup champs VUFC Hibernian and newly promoted Port Moody SC. Goals from Bradley Richardson, Farzad Ali, and Kyle Dent gave Hibernian the 3-2 win, with Brayden Rose and Quinn Dawson on target for Port Moody.

Next up at 2pm were another two close ones, both of which were decided by one goal margins.

Sahil Sandhu’s goal gave SFC Pegasus the narrow 1-0 win over Columbus FC, but it could have been so different with last year’s Division 1 champions missing an early penalty and playing some of the better football.

Another one of the three newly promoted sides, Westside FC, were in action at the same time, going down to a 2-1 loss to Inter EDC. All the action came in the second half of this one, with Justin Lee firing Westside ahead from the spot. Inter came roaring back though and goals from Andres Rojas and Ernesto Arteaga saw them get their new season off to a winning start.

The final two matches of the opening weekend were also decided by a one goal margin, with Emile Saimovici’s goal giving Croatia SC the 1-0 win over West Van.

Defending champions BB5 United were made to work hard to get their defence off to a winning start against Coquitlam Metro Ford Wolves, but their stacked line-up came away with the 4-3 victory in the end.

Nic Morello, Riley Pang, and a brace from new addition Farivar Torabi saw the Surrey side get off to an impressive start, and Torabi already looks to be the guy to stop in the Golden Boot race as he makes his return to the VMSL. Jovan Blagojevic, Kyle Jones, and Sang Hwang were on target for the Coquitlam lads.

So after all of that action, the very early VMSL Premier League standings look as follows: 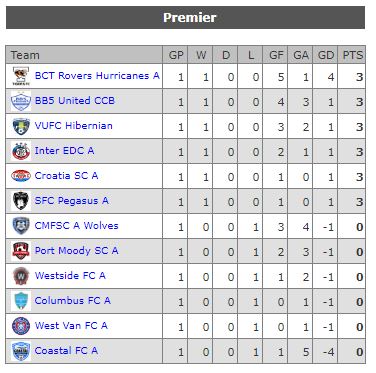 There’s six more games lined up for this weekend, three on Friday night and three on Saturday. Who’ll be leading the back after these ones? 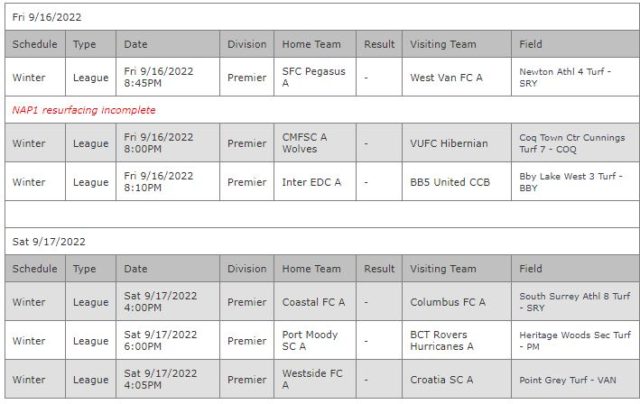 You can find all the results, fixtures, and standings across all of the VMSL divisions on vmslsoccer.com.