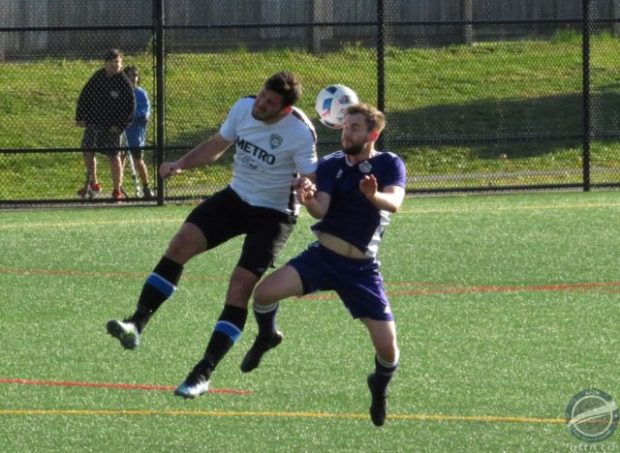 After an exciting weekend of BC Provincial A Cup action, the semi-finals are all set and we are guaranteed to have a Vancouver Metro Soccer League (VMSL) versus Fraser Valley Soccer League (FVSL) match-up in the final at Swangard Stadium on May 15.

There was drama and twists and turns galore over the four quarter-finals, with two of the matches needing extra time to settle them, and three of the games being settled in the end by a single goal.

The action kicked off at Newton Athletic Park Stadium in Surrey on Friday night as defending Provincial and National champions BB5 United CCB of the VMSL took on FVSL side FC Faly.

The VMSL champions were the heavy favourites going into this one, but Faly pushed them all the way after a stirring second half comeback that saw them have chances of pulling off the upset before BB5 regained control of the match in extra time. 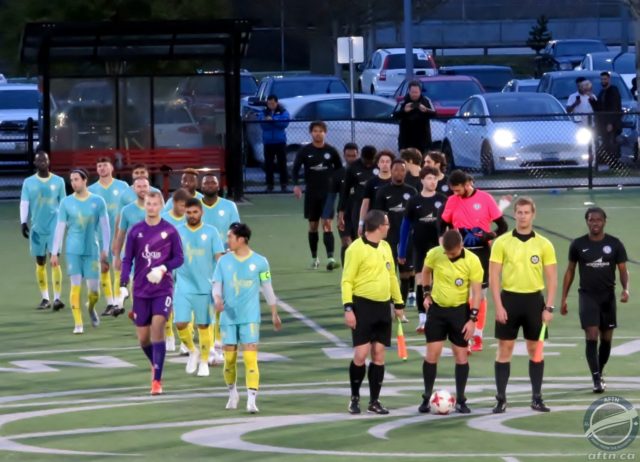 BB5 came out of the gate fast and were 1-0 up with less than two minutes on the clock when Faly’s defence went awol and a wide open Bobby Jhutty sidefooted home a Nic Morello cross.

Jhutty turned provider on the second goal in the 13th minute chipping the ball in to Connor Glennon, who capitalised on defensive hesitation from Faly’s Rafael Elias de Oliveira to drill the ball home and seemingly have BB5 coasting to a comfortable victory.

And they certainly had chances to add to their tally before the half was out, but that failure to finish them off was to come back and haunt them in the second half.

Faly’s half time team talk transformed the team who came out all guns blazing in the second half and they pulled one back in the 58th minute when Sairoob Sairoob fired home a low free kick around the wall that BB5’s Andrew Metcalfe in goal really should have done better with.

The game was going end to end now, but Faly’s pace was causing huge problems for BB5 and they tied things up in the 76th minute when Wonder Tarr ran on to a lovely chip forward from Sairoob Sairoob and got to it just before the home keeper to nick it past him and into the net.

BB5 could have gone back ahead moments later after an amazing sequence in the Faly box (missing from our highlights below as I was changing the camera battery!) that saw a good save from a Morello shot followed by Mark Talisuna crashing the rebound off the crossbar.

Both teams had chances to win it in normal time but couldn’t find the breakthrough and we were heading to extra time.

After being the ascendency for much of the second half, Faly started to fade and BB5 eventually took back over, going ahead three minutes into the second half of extra time when Morello showed nice composure and footwork in the box to curl one past the Faly keeper.

It was a lead they weren’t to give up and Talisuna put the icing on the cake for BB5 two minutes into stoppage time when he quickly pounced on some slow play in the Faly defence to make it a 4-2 final.

You can watch our highlights from the match on our YouTube channel HERE and in the video below:

Full credit to FC Faly who made BB5 work very hard for their win but the VMSL champions now advance to an intra-league semi final with Rino’s VSC Coastal, who were also pushed all the way in their semi-final at South Surrey Athletic Park on Saturday afternoon.

Like BB5, the VMSL side looked like they had put the game to bed against Bays United from the Vancouver Island Soccer League, but after knocking out another VMSL side in West Van last week in the first round, Bays fancied their chances in this one and came storming back before giving up a late goal to lose 3-2.

Coastal were in control in the early going and Jake Starheim put them into an early lead that they held until half time, as Bays slowly got themselves back into the match.

Coastal started the second half strongly again and when Isaac Kyei put them 2-0 up, they must have thought that was the job done but the VISL side had other ideas and launched a fantastic comeback. Bays pulled one back with just over 15 minutes remaining and then around 10 minutes later the islanders tied things up with a great finish.

With extra time looming Coastal found their groove again and they grabbed the winner in the closing minutes when a wide open Sean Kamensek headed home at the back post from a corner. There was still time for Coastal to get a late penalty, that was saved, and after a late scare and a fighting performance from Bays, Coastal booked their spot in the final four with a 3-2 victory.

That now sets up a tasty all-VMSL semi-final on Saturday at South Surrey Athletic Park with Coastal hosting BB5 United (4pm kick off). The two teams finished 12 points apart in the league, with BB5 getting the better of their two games by 4-0 and 4-1 scorelines. BB5 will certainly head into the semi as favourites, but they’ve had to work hard in their first two matches and will be hoping they can get all their players healthy to play in this one, especially Caleb Clarke who missed Friday’s quarter-final.

The island’s last hope of a place in the last four was Nanaimo United, and although they gave FVSL treble winners FC Tigers a battle at Burnaby Lake on Saturday afternoon, it was the home side that came through the tie 2-1.

It was a tight first half, with Nanaimo putting in a solid defensive showing, but the Tigers wore them down in the 43rd minute when Erik Edwardson broke up the right and sent a cross in to Farivar Torabi at the near post. The FVSL Golden Boot winner seemed to get a slight touch as the ball went through to Ivan Meija, who ran in unmarked and made no mistake from six yards out to give Tigers the 1-0 lead.

The islanders kept it to a one goal game until the 85th minute when the Tigers grabbed their second and once again it was Edwardson who was in the thick of the action, when his shot cannoned off the left post and the rebound hit an unfortunate Nanaimo defender on the line and into the back of the net.

Matthew Mehrassa headed home a long free kick for Nanaimo a minute into stoppage time to make the last couple of minutes interesting, but there wasn’t enough left on the clock for the VISL runners-up to find the dramatic late equaliser and the Tigers roar on.

You can watch the full match on Sports Media BC’s YouTube page HERE (they don’t allow embedding on websites so you’ll have to watch this over there instead).

The last quarter-final was the one we felt was the match of the round at Matsqui Recreation Centre in Abbotsford on Saturday evening and it didn’t disappoint. 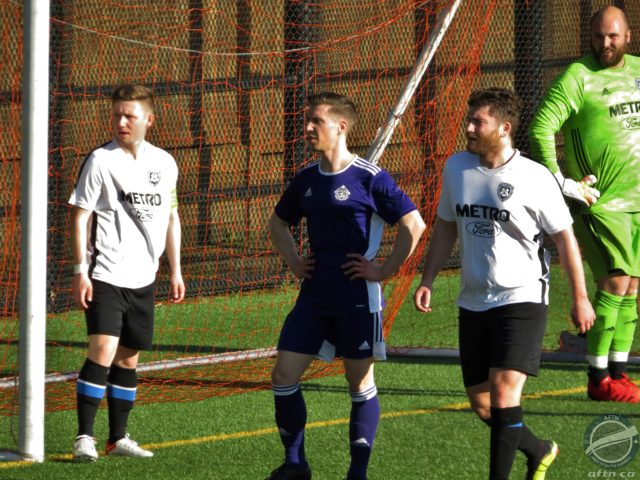 It was a FVSL v VMSL battle as Abbotsford United played host to Coquitlam Metro Ford Wolves and the teams needed 120 minutes to find the winner in this one.

Both teams exchanged chances in the first half, but Abbotsford were looking the slightly more dangerous side and controlled the majority of the play. The FVSL side were rewarded with the opening goal three minutes before half time when Wolves keeper Dillan Fogliato saved a Connor Hildebrant shot but the rebound fell to Colton O’Neill, who pounced quickly to fire Abbotsford ahead from a few yards out.

The goal lit a fire under Coquitlam who came out looking a much different team in the second half and they tied things up in the 51st minute when Kyle Jones curled the equaliser in straight from a corner.

Metro Ford almost took the lead moments later but were denied by two goalline clearances and although both teams had their chances to win it in normal time, the game headed for an extra 30 minutes.

It was still a wide open game, with both sides fancying their chances of grabbing the win before penalties, and they both had early chances to go ahead but the VMSL team’s task was made more difficult when Connor Moe was sent off three minutes into extra time for a contentious last man tackle on Daniel Davidson. The Wolves bench weren’t happy and it saw coach Alfredo Valente given his marching orders by the ref.

Abbotsford turned up the pressure on the ten men and they got the breakthrough in the 103rd minute. Fogliato denied Davidson with a leg save, but the rebound once again fell to O’Neill, this time six yards out in front of goal, and he had time to compose himself and fire home what proved to be the match winner.

The home side had the opportunity to put the game to bed two minutes later when Davidson was brought down in the box, but Folgiato saved the striker’s spot kick and it set up a nervy final 15 minutes. Coquitlam tried to find the equaliser but couldn’t and Abbotsford advanced to the last four.

You can watch our highlights from the match on our YouTube channel HERE and in the video below:

Abbotsford’s victory now sets up an intriguing all-FVSL semi-final clash with FC Tigers at Hjorth Road Park in Surrey on Sunday (kick off is 3pm). FVSL treble winners Tigers are looking to add another trophy to their cabinet and will face an Abbotsford side they finished 18 points ahead off and beat three times in the Premier Division standings. Their last meeting, however, was in April’s Pakenham Cup final with the Tigers needing a stoppage time goal to secure a 2-1 victory, so you can be sure Abbotsford will be up for this one.

You can find all the results and fixtures for all the men’s and women’s Provincial Cup games on the BC Soccer website HERE.