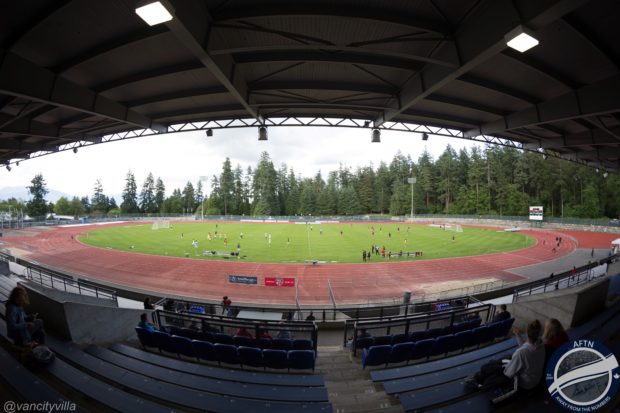 The inaugural League1 BC season is now less than three week’s away. So far on AFTN, we’ve brought you a quick primer on all seven teams, and introduced you to the coaches on both the men’s and the women’s side. We’ll also be bringing you some squad profiles and interviews on the podcast in the coming weeks, but for the next few days we’re going to take you on a groundhopping trip around the seven grounds and stadiums that the teams will be calling home this summer, kicking things off with Swangard Stadium – the home of TSS Rovers. 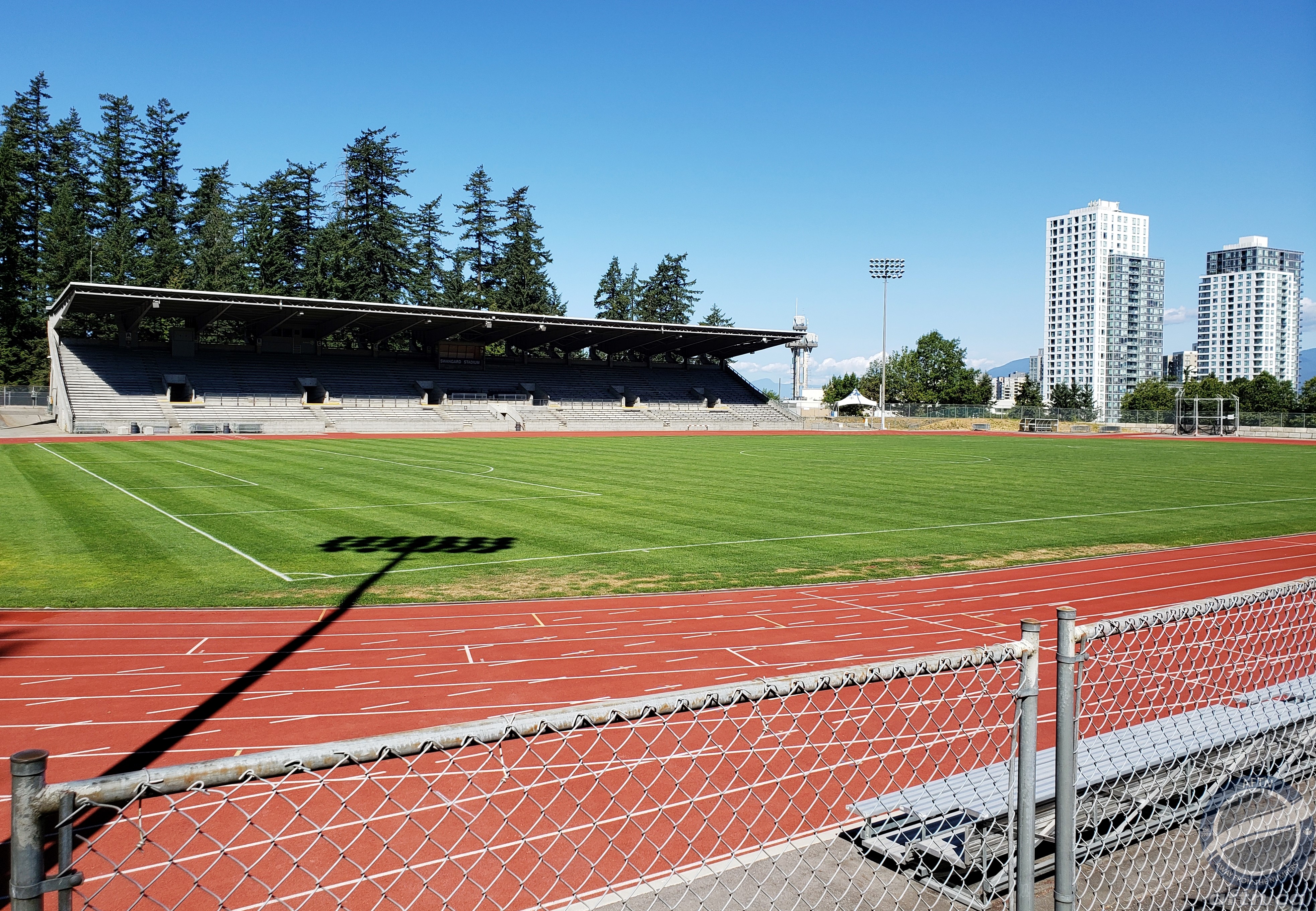 Swangard Stadium really is a jewel in the crown of football grounds in British Columbia.

Swangard will always hold a special place in my heart. It was the first stadium I saw a football match at in Canada, during a vacation to Vancouver in October 2001. It was then the place I called home for my football watching when I subsequently moved to Vancouver six years later, making many friends among the Southsiders back in those fun days of the Whitecaps in the USL.

With one of the best playing surfaces in Canada, Swangard Stadium hasn’t seen the use for football in the last 5 to 10 years that it really should have. But that all now appears to be changing. This year alone Swangard is the new home for Whitecaps FC 2 in MLS Next Pro, has hosted a couple of BC Soccer showcases, and will host the men and the women’s BC Provincial A Cup finals this month.

But the tenant we’re most interested in here is TSS Rovers, who have called Swangard Stadium home since 2017 and will continue to do so in League1 BC this summer.

Let’s have an in-depth look at the wonderful stadium. 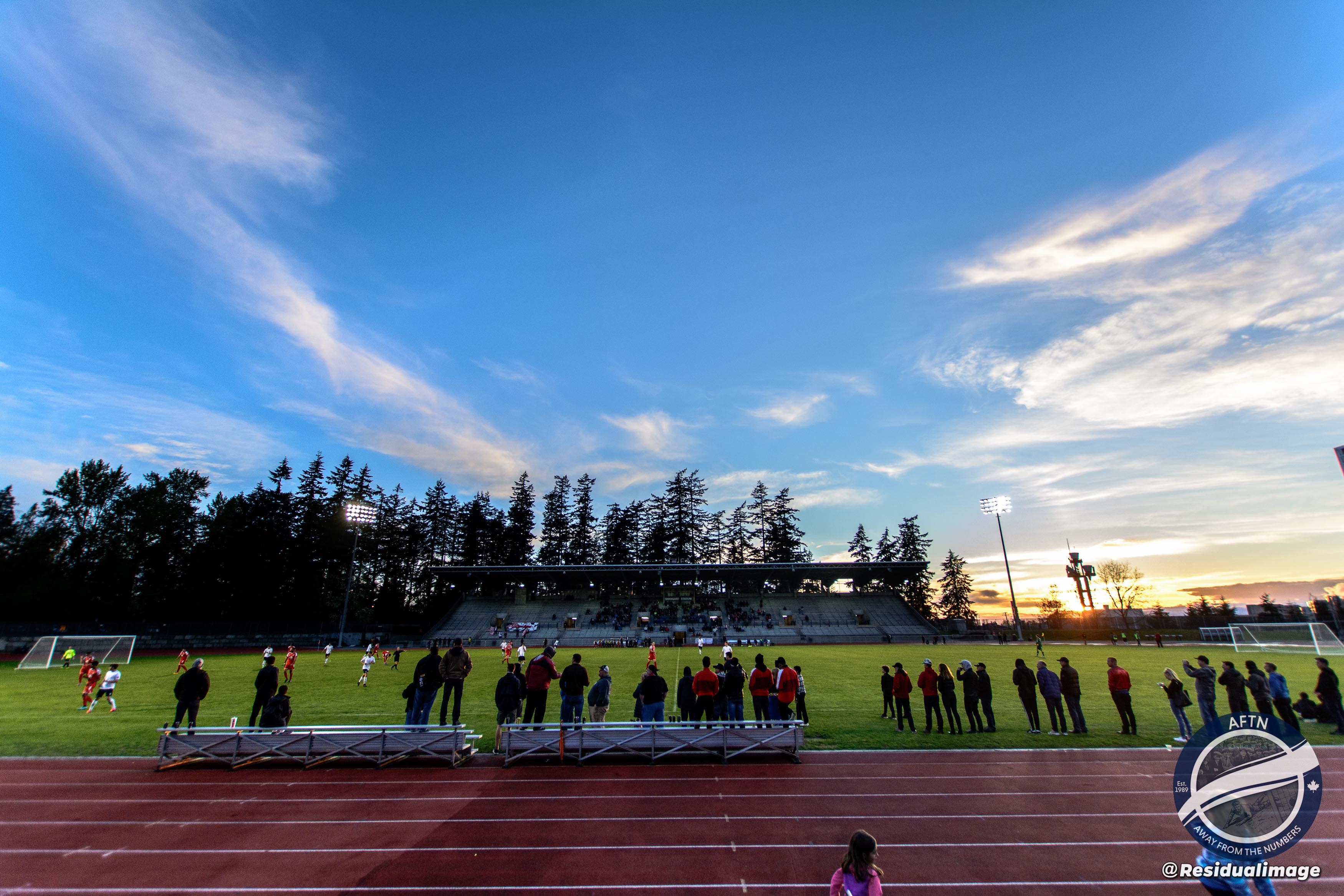 Swangard Stadium – view to the west 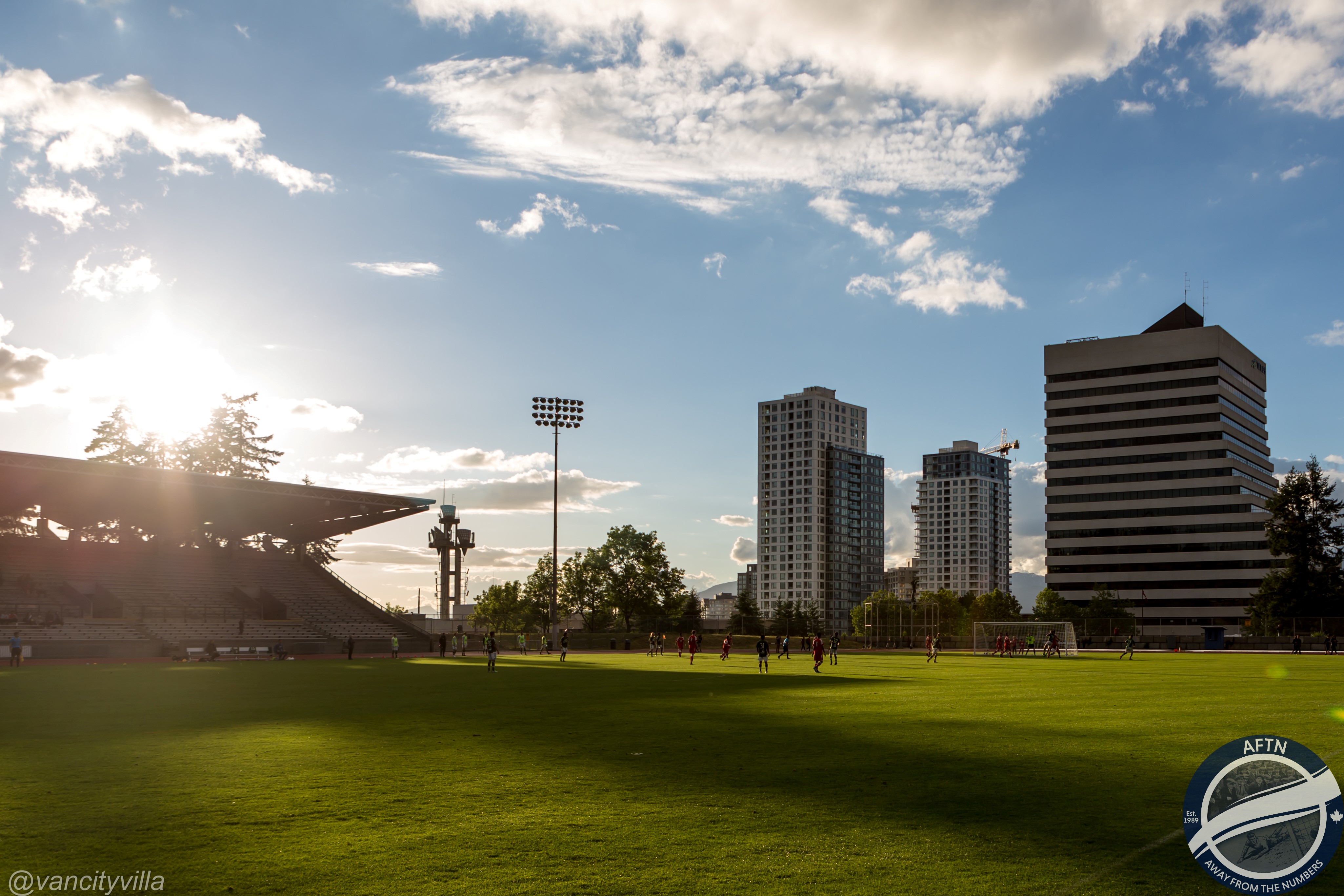 Swangard Stadium – view to the northwest 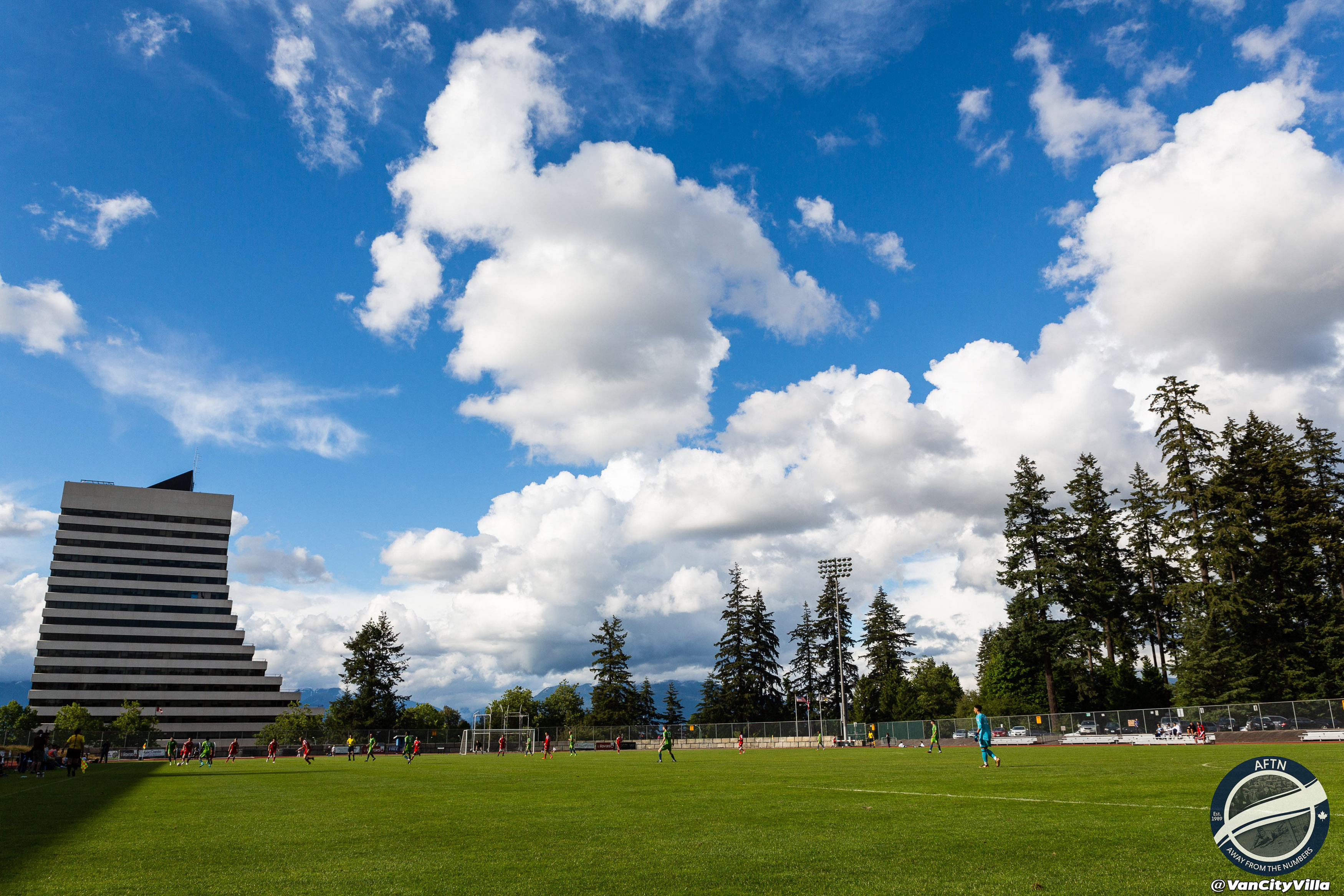 Swangard Stadium – view to the north

History: Swangard Stadium was officially opened on April 26th 1969 after Vancouver Sun Managing Editor Erwin Swangard led a campaign to raise $1 million to enable the stadium to be built, one of many such sports-based campaigns the German helped to make happen in the Vancouver area.

Swangard was a remarkable man. After fleeing to Canada to escape the Nazi regime in the early 1930’s, the former sports editor of both the Vancouver Sun and Vancouver Province wanted to make Vancouver a sporting hub and his work earned him a place in the BC Sports Hall of Fame and Burnaby’s stadium take his name.

Initially imagined as an athletics stadium with the ability to be used for a number of different sports, Swangard’s first event was actually a soccer match, a cup final between local side Burnaby Ramblers and the wonderfully named North Vancouver Burdett Black Beavers (as per BC Sports Hall of Fame curator Jason Beck’s recent tweet). The match was broadcast live on CBC and finished 2-2 after extra time.

Swangard was home for the Vancouver 86’ers from 1987 to 2000 in the Canadian Soccer League, the American Professional Soccer League, and the A-League, before the team reverted to the Vancouver Whitecaps name in 2001. The Whitecaps then played at Swangard in the A-League, the United Soccer League, and the USSF Division 2 league until the club joined Major League Soccer in 2011 and moved away from the stadium for their first team matches. The club still played some reserve league and PDL games at the ground over the subsequent years, returning this year full-time with WFC2 in MLS Next Pro. The club’s women’s team also called Swangard home in the 2000s.

Swangard has also seen it’s fair share of international matches, playing host to the Canadian national team in many World Cup qualifiers over the years, often with crowds of over 10,000. The stadium also hosted seven matches in the group and Round of 16 stages at the FIFA U20 World Cup in 2007. 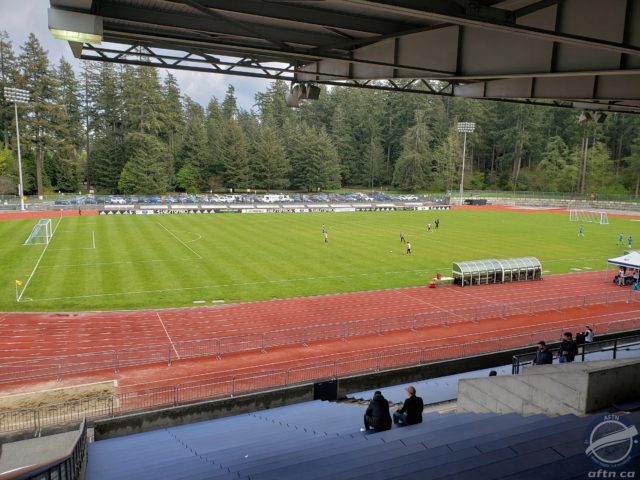 Swangard Stadium – view to the east towards Central Park 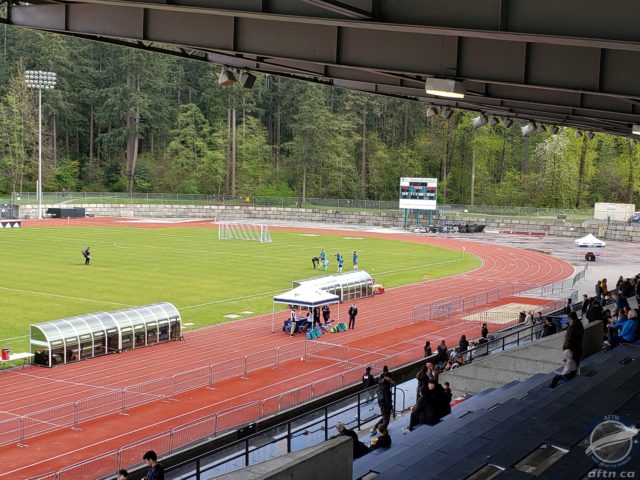 Swangard Stadium – view to the south towards Central Park

Facilities: Swangard has one main grandstand on the west side of the stadium that seats 4,500 on primarily bench seating, with a handful of actual plastic seats in front of the press box in the middle of the stand.

The stadium has four dressing rooms, a concessions, and permanent men’s and women’s toilets all situated under the grandstand. There is one scoreboard located at the south end of the stadium.

The stadium is multi-use, hosting field sports and community festivals, along with a number of full track and field events. The grass pitch is surrounded by an eight lane 400 metre Olympic regulation running track, which was replaced in 2019, and there are sandpits for long jump and triple jump athletic events. There is also a steeplechase pit, and high jump and pole vault facilities. 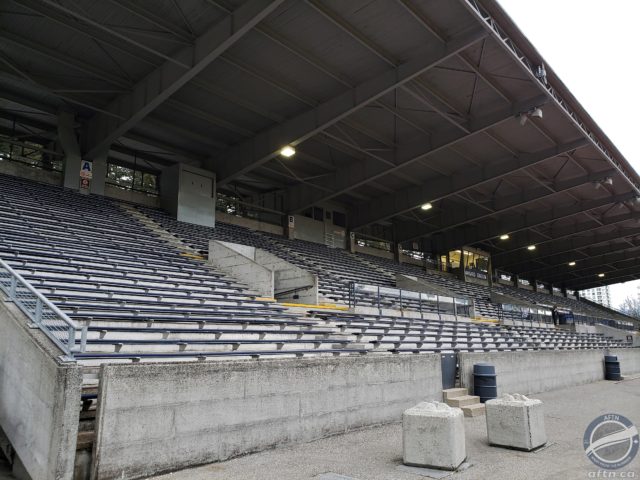 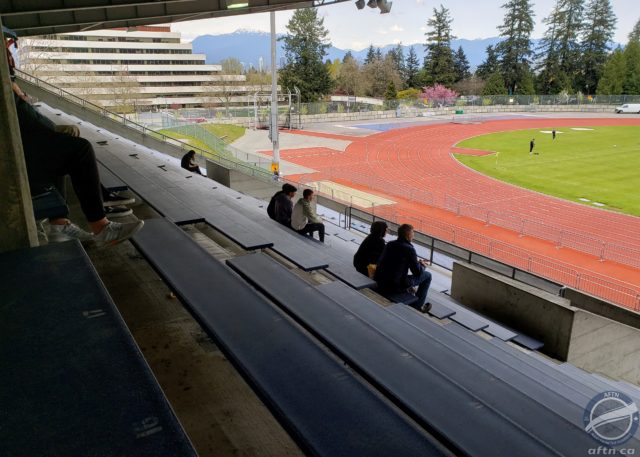 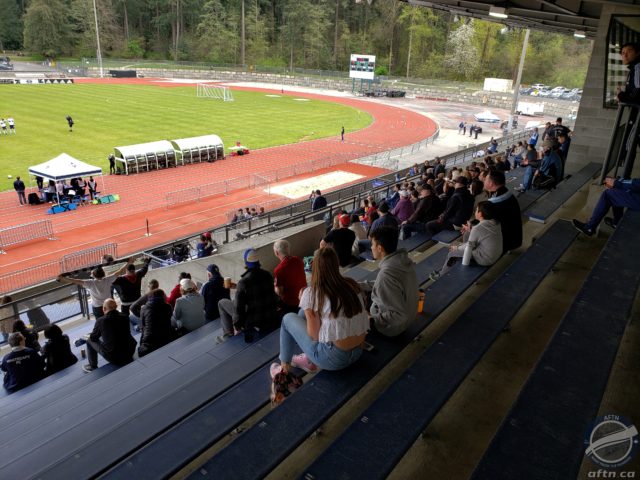 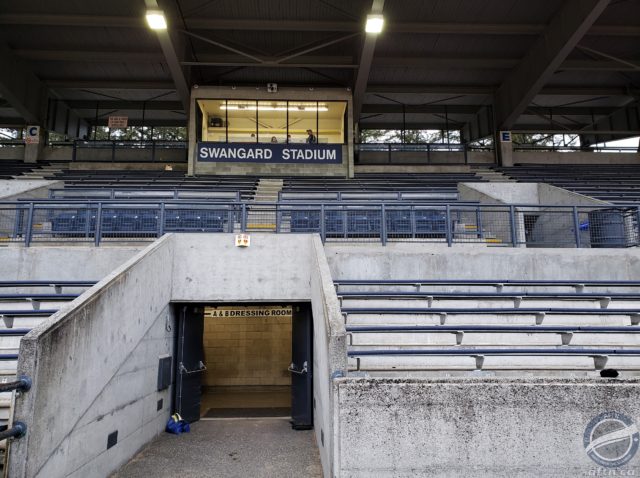 Swangard Stadium – centre grandstand view up to the press box 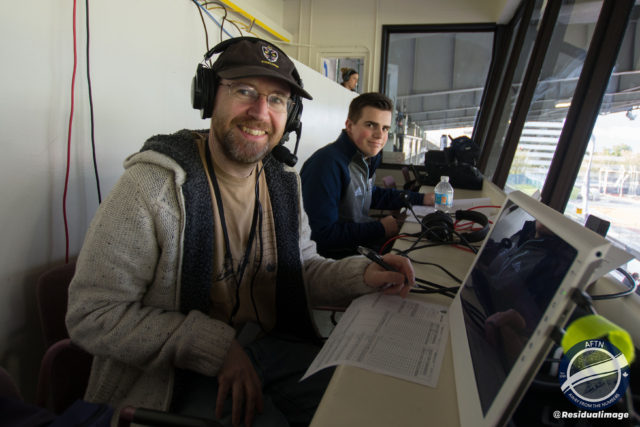 Swangard Stadium – inside the press box 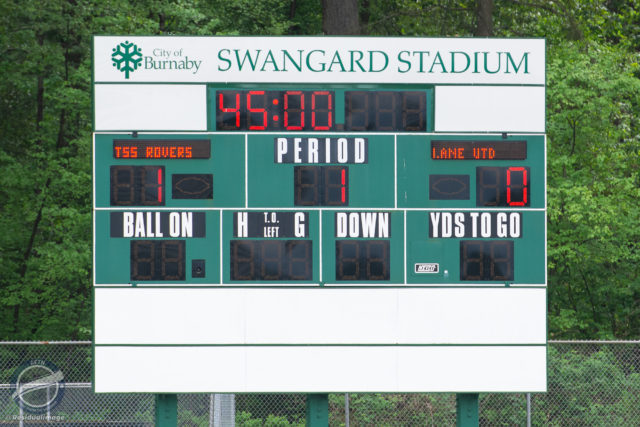 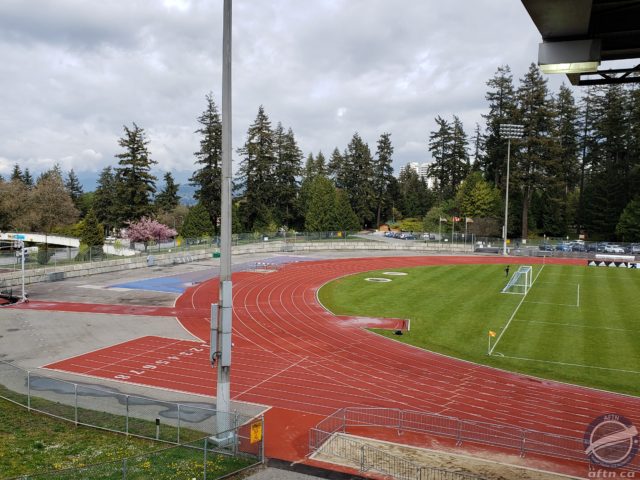