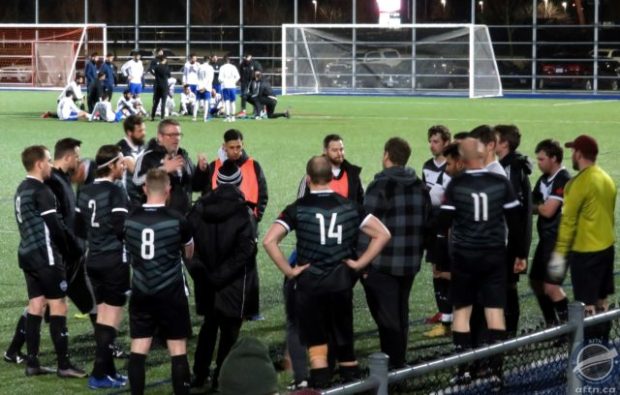 The first adult BC Provincial Cup action in three years took place over the weekend with eight preliminary round matches in the Keith Millar B Cup playing out across the lower mainland and the islands.

With teams representing five leagues across the province, the B Cup is the most diversely represented trophy in the BC Soccer arsenal as teams from the Burnaby Men’s Soccer League (BMSL), Fraser Valley Soccer League (FVSL), Richmond Adult Soccer Association (RASA), Vancouver Island Soccer League (VISL), and the Vancouver Metro Soccer League (VMSL) battle it out for glory.

VMSL side Metropolitan FC won the trophy the last time it was played, defeating FC Serbia United 3-0 in the 2019 final in Langford. As a Division 1 side now, Metropolitan are not eligible to compete in this year’s tournament, but 24 teams were in the pot at Fraser Mills Taphouse in Port Moody for the draw on April 2.

The action got underway at Willoughby Community Park in Langley on Friday evening with FVSL Division 2B champions taking on VMSL Division 3B champs and Division 2 Cup runners-up Guildford FC.

Guildford have come into this year’s Keith Millar Cup looking to do some damage after a fantastic VMSL campaign that saw them have an undefeated league season and narrowly lose the Division 2 Cup final. On the results of their performance in a big 4-0 win over Langley Utd Dynamo, they could certainly be a team to watch this year in the provincials.

The early action was fairly even in this one, but after Shubh Malhotra fired Guildford ahead five minutes before half time, there was no looking back.

Jaskaran Bal tucked away a ball across goal in the 57th minute before a very nice double from Harvir Padda in the 65th and 68th minutes rounded off the scoring.

You can watch our highlights from the game on the video below:

Saturday saw four preliminary round match-ups, kicking off with VISL Division 3A runners-up hosting Abbotsford United B at Forrest Field in Ladysmith. It was the FVSL Division 2A side that triumphed in this one, coming away with the narrowest of 1-0 victories.

Burnaby Lake played host to two matches on Saturday evening, with BMSA runners-up Mundiavocat coming through a barnburner 3-2 against FVSL Division 2B side Surrey FC Punjab and VMSL Division 2A champions VUFC Snipers coming away with a 3-1 victory over We’R United of the BMSA.

Sunday’s action kicked off with VISL Division 3B side, and George Pearkes Challenge Cup runners-up, JDF Kings pulling off a bit of a cupset with a 2-1 win over FVSL Division 2A runners-up Ridge Meadows SC United at Royal Bay in Victoria.

It was an even bigger trip for FVSL Division 2A side Aldergrove United Highlanders who headed over to play FVSL Division 3B champions Saltspring FC, but it was all worthwhile after they came away with a comprehensive shock 3-1 victory.

So with those games now in the books, that sets up the following eight First Round matches:

Those ties are scheduled to be played over the weekend of April 22 to 24 and with all five leagues still represented, there should be some cracking games in there.

You can find all of the results and fixtures across all of the BC Provincial Cups on the BC Soccer website HERE.