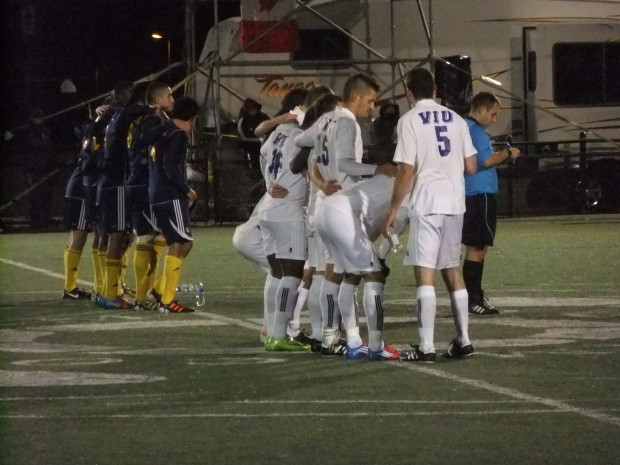 The 7th seeded PacWest side were looking to make it two Championships in three years but went down 7-6 on penalties to Ontario’s 5th seeded Humber College Hawks.

The teams were tied 2-2 at the end of normal time. Neither side could break the deadlock in extra time and the dreaded spot kicks loomed.

As the shoot-out went to an eighth round, VIU defender Dan Cato was the unfortunate Mariner to have his penalty saved by Hawks keeper Euginio Garro. That set the scene for midfielder Yousif Yousif to step up and fire his kick home to win a third CCAA Championship for Humber College.

It was an exciting and enjoyable match, and a great advert for the college game in Canada. Despite the cold weather, there must have been around 400 fans in attendance and they were served up a cracker.

The Canadian Colleges Athletic Association National Soccer Championships have been held since 1983 and for the first four years it was held as an invitational before becoming a fully fledged National Championship in 1987.

Both of this year’s finalists had already lifted the silverware. VIU in 2010 and the inaugural 1983 competition when they were Malaspina College, and Humber in 1995 and 2001.

The 2012 final was an entertaining end to end affair and although both teams had spells in the ascendency, VIU will be disappointed not to have wrapped the game up before penalties, having dominated the second half and extra time.

It was Humber Hawks who were the better team in the first half and should have gone in to the interval a couple of goals up. As it was, they were lucky to go in level.

The Hawks looked the faster and more skillful side from the start and nearly took the lead just eight minutes in when Marcus Nunes ran straight through the Mariners defence before blasting over.

Humber College were looking the more dangerous team, but it was Vancouver Island who opened the scoring in the 18th minute.

Chris Merriman hit a free kick to the back post which looked as if it would drift out of play. Dan Cato managed to not only keep the ball in play but headed it across goal to an unmarked Romain Martin six yards out and he had the easy task of heading home the opener.

Humber nearly responded immediately and Nunes again used his pace to close in on goal. One on one with the keeper, Robbie Cochrane produced a fine point blank leg save to keep the Islanders lead intact.

The Hawks tried to find an equaliser but VIU were holding firm and they did so until stoppage time in the half, before Humber’s Daniel Brago hit a stunning equaliser from 30 yards out to send the teams in level.

The Mariners regrouped at the break came out for the second half more adventurous and were soon the better side.

They fell behind though on the hour mark after the Hawks had forced a corner.

Cochrane produced two great saves to keep the scores tied, but the danger just couldn’t be cleared and as Humber played the ball in again, Matthew Rios headed home from close range to give the Ontario college the lead for the first time in the game. 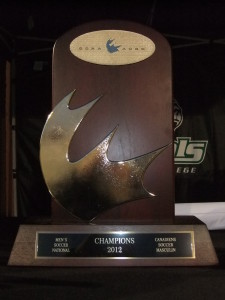 Fighting for their Championship lives, VIU turned up the pressure and they got their reward in the 76th minute when Garro couldn’t handle a long range shot from Jamie Taylor and helped it into his own net.

It was a complete howler but the keeper certainly made up for his mistake later in the shoot-out.

With Humber on the back foot, VIU sensed blood and launched attack after attack, and they nearly won it with four minutes remaining when Jordan DeGraff was allowed to get off another shot from outside the box which he crashed off the left hand post.

So close, but not close enough to stop the game going in to extra time tied at two, and there only ever looked like being one team that was going to go on and win it in that extra period and they were the Mariners.

VIU had brought on the speedy AJ Kambere towards the end of the second half and the former Whitecaps Residency prospect was tearing the Hawks defence a new one, as they struggled time and again to handle his pace.

The first period of extra time belonged to him and he nearly set up the go-ahead goal with three minutes of that first half remaining.

After receiving the ball on the left wing, Kambere cut inside and went past two Mariners defenders with ease before slipping the ball through to Stephen Ewashko. The midfielder turned superbly to put himself free but with the goal gaping he pulled his shot wide right.

The break came at the wrong time for VIU and their momentum was killed for the final fifteen minutes, with both sides having half chances due to some poor defending but neither able to capitalise.

The Hawks were reduced to ten men in the 116th minute when Nunes was sent off for a second booking. With their only player that looked likely to cause the Mariners defence any problems now off, Humber were happy to sit back and take the game to penalties.

There was confusion minutes later when VIU’s Blaze Roberts picked up a booking, but despite having announced as being booked earlier, he remained on the pitch and saw out the game!

The final whistle brought the penalty shoot-out and as cliched as it now is, after such a good game, it was a shame that one side had to lose like that.

Next up for VIU was captain Matt Mehrassa, but he blasted his kick as high into the night sky as you’re ever likely to see a spot kick. He was distraught as he made his way back to the centre, but his pain was cut short by his team-mates cheers as the Hawks’ Roberto Galle stepped up and inexplicably did the same thing, just not as high.

The Islanders’ Romaine Martin and the Hawks’ Marcelo Cappozolo ended the first five kicks tied at four apiece and it was now sudden death.

AJ Kambere and Davis Stupich hit home for VIU and Gerardo Magno and Thomas Santibanez-Esponsa did the same for Humber, before the deciding penalties from Dan Kato and Yousif Yousif, which you can watch below:

As you can see, Yousif’s winning penalty sent the Ontario college into raptures, although their moment was soured a little by them goading the VIU supporters, with goalie Garro pointing to his jersey and yelling “remember this name”.

Having seen the mess he made of VIU’s second goal, we’ll get back to him on that one.

This was my first taste of CCAA action, and although not quite on the NCAA or CIS level, there was some good football on display and my ‘man of the match’ was VIU’s Robbie Cochrane, who looked solid throughout and couldn’t be faulted for either Humber goal.

A great game though and unfortunately VIU fell just short of bringing some more CCAA success to BC, leaving their alma maters such as the Whitecaps’ Simon Fudge, and my wife, disappointed.

BC teams have won 14 of the 30 Championships and with today’s win by Humber, the OCAA have won ten.

Let’s see what next year brings, but hopefully some more BC success.