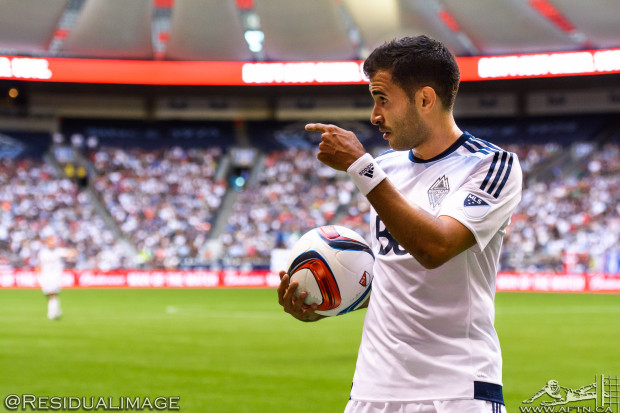 More than a week after the trade rumours first surfaced online, Steven Beitashour is now officially a Toronto FC player.

Actually, quite a rich bastard after what TFC have decided to fork out for the right back, but more on that later.

Why it took so long for the trade to become official, who knows? Maybe Beita woke up last Friday, took a look at TFC’s ignominious nine-year history in MLS and thought to himself, “what have I done?”.

Toronto have certainly been busy this offseason. Once again. And we all know what a successful formula that’s proved to be for them in the past.

Beitashour joins Drew Moor and Will Johnson in becoming TFC players this week, while Vancouver Whitecaps have…. well they’ve been enjoying the festive season, opening their chocolate advent calendar and making sure that Santa’s healthy, gluten-free cookies are all set to go with some unsweetened vanilla cashew milk to wash them down.

Looking at how previous seasons, and offseasons, have panned out, you’d think that Whitecaps fans wouldn’t be pushing the panic button quite yet at the lack of player acquisitions, but a cursory glance at Twitter the last few days (always that accurate bastion of public opinion) tells a different story.

Apparently despite achieving their best ever season in MLS, the sky in Whitecapsland is falling because they have failed to add any unwanted journeymen or overpaid players to their squad for 2016.

Make no mistake. There has to be some key additions and quality ones at that, but this is December.

The Beitashour trade has generated a lot of chatter. Understandable when a club gives up it’s starting right back for not even the equivalent of a bag of balls. Coming the other way is TFC’s second highest, second round draft pick. At least a bag of balls is more likely to see out the season. Of course, it could have been worse. They could have sent the ‘Thrush’ out west (don‘t you just hate in-jokes?!!).

Yes, it looks on paper that the ‘Caps got well fleeced but that’s simply not the case. It‘s actually very prudent salary management by the Whitecaps.

Beitashour could have gone into the Re-Entry draft (or taken himself out of it altogether) and gone for nothing. Yeah, they didn’t get much more than that, but they were never going to and people have to understand that.

Could they have traded him to another team and got a better return? Highly unlikely considering what TFC are going to be paying him. It’s hard to see any other team putting the monetary value on Beitashour that Toronto have.

Coming to the end of his second year in Vancouver, the Iranian international had entered an option year. Beitashour was on a guaranteed salary of $197,166.67 this past season, a $20,000 increase on the year before. That option was an even greater amount. An amount he is simply not worth in the MLS world of the salary cap.

You have to trust us when we say sources have confirmed to us that he is getting a lot more than even that option amount at TFC.

It will be interesting to see the actual amount shown on next year’s salary list and whether allocation is used to pay him down a little make the final total visually appear to be a lot more palatable. If it isn‘t, then people will balk. This is a player that was making $49,612.50 in his last year with San Jose.

Toronto need to badly improve their back end. Beitashour will be an upgrade, but a costly one coming at way over the market price.

It’s all relative and perceptions of course. What value do you put on a strong backline? Robinson puts a lot on it at Vancouver, which is why he’s built his team around a solid defensive footing, but he knows that has it’s limits in the MLS environment.

His departure will leave a hole. I’m not going to argue otherwise. Beitashour was second on the Whitecaps this past season with five assists. A staggering stat considering the other players in the ‘Caps squad and the attacking deficiencies of the right back.

Not a banner year for the player, who had six in 2012 and seven in 2011, but a vast improvement on what had gone before in the past two seasons. Two goals in six MLS seasons though and none with the ‘Caps. That in part is why Robinson wouldn’t pay the silly money to keep the player here.

Robinson wants his team to play a certain way and part of that is to ideally have attacking full backs that are also solid defensively. Looking at the four main players he has/had at his disposal in that regard, shows up the problems he was facing.

In Beitashour and Jordan Harvey, Robinson had two veterans that were excellent in the latter and patchy in the former.

Sam Adekugbe, is excellent going forward and strong at the back, with a lot to learn and a lot of career ahead of him. The left back slot is sorted.

The right, as it has felt for much of Vancouver’s MLS era, is where the problems lie. Jordan Smith has shown some great attacking prowess and tough tackling. He’s even been used in the midfield. But the Costa Rican international struggled in MLS defensively. He looked slow, a step off, clumsy and was burned. Teething problems? A recent call up to the Ticos hopefully indicates yes, but the jury is still out.

Right now, he is Robinson’s starting right back after Beitashour’s departure and that is a scary thought.

Beitashour’s departure will likely see Robinson dip into the transfer market for a new right back, unless they take a swing on USL player Chris Serban. That’s likely to be too soon for the homegrown prospect, but that’s a time not too far away.

Robinson will look for a player with some experience, likely within MLS and coming in at the $70-80,000 mark. Someone to battle it out with Smith and to free up a whack of cap space to be spent on a new right winger (we’re taking it that Mattocks’ inevitable departure makes way for the new striker or two!).

So we now come back around to the quietness of the Whitecaps in terms of player additions so far this offseason.

When we sat down with Carl Robinson for our second annual State of the Whitecaps pod cast chat, he told us that “nothing’s imminent” in terms of player signings, so hold tight people.

I’d rather wait till the roster is finalised for First Kick before I go into judgemental panic mode, but if you want to do otherwise, knock yourself out. But it is a futile endeavour right now.

Looking at what has been done so far, Kendall Waston has been extended, Pa-Modou Kah re-signed and it’s looking fairly certain that Cristian Techera will be back, along with Deybi Flores.

Not perhaps the most exciting December ever in Whitecapsland, but it is par for the course.

It might feel like an age ago now but if you look at the two previous preseason’s with Robinson in charge, he likes to build his squad in January and February and sometimes even later than that.

Last season, apart from Octavio Rivero’s Christmas Day announcement, all the initial action came in January and when it happened the signings came thick and fast. Robinson hinted to us that you could see another three in three days in a few week’s time.

If you look at the key difference makers in the current Whitecaps squad. Pedro Morales and Matias Laba were signed in the month of February. Cristian Techera in April, David Ousted in June and Kendall Waston in August.

I’d much rather we wait patiently and get more signings of that ilk than rush into making the wrong move or a kneejerk reaction to what others are doing. If you’ve learned anything about Robinson these past two years, it’s that he doesn’t operate that way and everything is done with a long term plan in mind.

Things are certainly not perfect with the Whitecaps player acquisition model, but there’s certainly no need to get your knickers in a twist at this point in time.

The owners do need to open those purse strings a little bit wider and attract some real attacking difference makers. You get what you pay for a lot of the time.

And when a key problem is identified midseason, as has been the case for the past two years in the goalscoring department, something has to be done to fix that sooner rather than later.

If you look at last season’s team, the core is there. It just needs some fine tuning and some right additions. Beitashour’s departure just makes that include a right back to go with the right winger and the striker.

As long as the right additions are made before First Kick 2016, I really couldn’t give a toss whether they happen in December or late February.

The great thing about Beitashour’s departure is the money it now frees up. Let’s hope it is spent wisely, productively and successfully. For if it isn’t, that’s the time to start panicking.