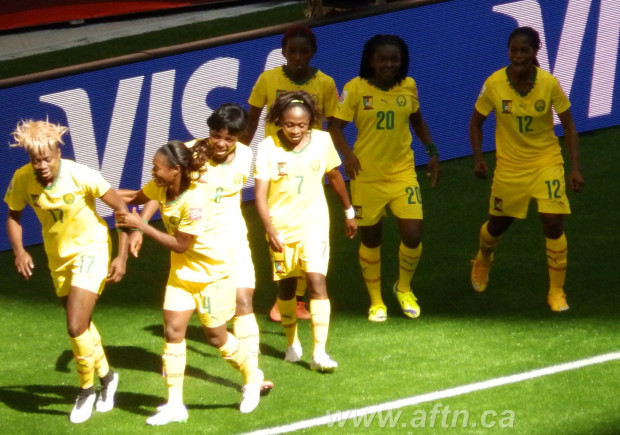 Every World Cup, whatever gender and whatever age group, fans want to see the underdogs have their day. To triumph over the odds and produce a Cup upset that will see them talked about for years to come.

The men’s World Cup usually throws up a few shock results over the years, but the women’s game, not as many, with the gulf between the elite teams and the chasing pack narrowing at what appears to be a slower rate. But narrowing it is all the same.

This year’s tournament has already shown the results of both the gulf (Germany’s 10-0 steamrollering of the Ivory Coast) and the narrowing (Nigeria’s 3-3 draw with Sweden coming to mind).

As Vancouver gets set to host their second set of doubleheaders in Group C, one country is already dreaming big with a bit of giantkilling, as the Lionesses’ of Cameroon look to build on their 6-0 thrashing of Ecuador when they take on defending Champions Japan at BC Place tonight.

Cameroon are no strangers to World Cup shocks. They have thrilled football fans worldwide with their play in the Men’s World Cup in recent times. In particular, their fantastic Roger Milla inspired run to the quarter-finals of Italia ’90 will long live fondly in my memory and many others.

While the Indomitable Lions have qualified for six of the last seven World Cup Finals, the women are appearing in their very first ones here in Canada, after qualifying as African runners-up to Nigeria.

Their appearance builds on their first ever qualification for an Olympics in London three years ago and sees the continued rise of the team under their charismatic coach Enow Ngachu. He never seems to be without a big smile on his face. 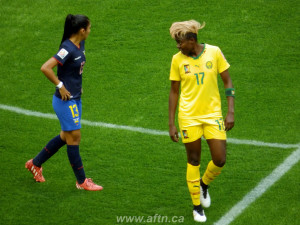 Ngachu has been the coach of the team since 2004 and his building work is now reaping some real rewards and producing some impressive talent, perhaps none more so than Monday’s hat-trick heroine Gaelle Enganamouit (pictured).

For the Cameroon coach, it was all about showing that continued improvement on the world stage.

“Our main objective was to do better than 2012,” Ngachu told reporters at Thursday’s pre-match press conference. “In the last Olympics games in London, we conceded 11 goals, scored only one and had three defeats.

“We’ve been working with this group for the past seven years together. They started with the under-17. After the game against Ecuador, they have started dreaming, but we need to be humble. We have attained our objective.”

So just what has been behind the team’s turnaround and recent successes?

“As a coach, after each game, you must go back to the drawing board and see what went wrong and we discovered that in 2012,” Ngachu added. “We made tactical errors. Everybody was young.

“We’ve worked very hard. We want to exist on defending first before attacking. We’re quite happy because in the last African Nations Cup, we conceded less goals and we had the best goalkeeper in the tournament. So it means we’ve improved a lot and can only be happy.”

Going into the Ecuador game, it was hard to know what to expect from either side. Ecuador were ranked 48th in the world, Cameroon 53rd. You wouldn’t have been surprised by a draw or a narrow win for either side. But the Africans produced a hammering that caught, I think, pretty much all of us by surprise.

Right now, we don’t know if that 6-0 scoreline was because Cameroon were good or Ecuador were just really, really bad. Maybe it was a mixture of both. What 19th placed Switzerland do to the South Americans in the first game this evening, will perhaps be a better indicator as to how Cameroon might fare in the second against Japan.

It’s a match Ngachu and his squad are relishing, no matter how daunting it may be and how much of a one-sided scoreline could be doled out by the defending champs and the side ranked 4th in the world right now.

“It’s a dream come true playing against the Champions,” Ngachu said. “It’ll be another experience for the Cameroon national team. We know it’s going to be very tough but the best team will win.”

Japan looked exciting and patchy in their narrow 1-0 win over Switzerland on Monday. It took a debatable penalty for them to get the job done and they had a few narrow escapes and had to thank some poor Swiss finishing for coming away with all three points in the end.

They should make it six out of six tonight. On paper, there is only one possible result. But football’s not played on paper.

Japan coach Norio Sasaki genuinely seemed concerned about Cameroon’s attacking firepower in his own press conference on Thursday. Ngachu countered by saying he was concerned by both Japan’s attack and defence.

Cameroon played relaxed and were a joy to watch against Ecuador. With no pressure, comes more free-slowing football and Ngachu said you can expect the same against Japan.

“They’re quite excited but we don’t have pressure on our side. The Japanese will be having that pressure. We don’t have any pressure, so we’ll play as usual and if we can have a positive result then fine.”

Whichever side wins, they’ll be guaranteeing themselves a spot in the Round of 16. But after banging in six goals in their first game, barring two horrible defensive collapses, Cameroon look set to be a top third placed finisher at the very worst, no matter how they fare against Japan and Switzerland. 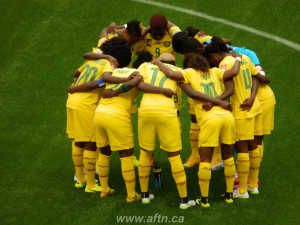 Do the squad dare to allow themselves to dream and look beyond the group stages at what may lie in store? Striker Gabrielle Aboudi Onguene doesn’t want to get too carried away but the goal deluge against Ecuador has certainly got them believing.

“I would say that mentally it is a good thing to score,” she told reporters in translated French. “It shelters us, it protects us a little bit. As was said, we came here with the objective of doing better than 2012. We dream of making it out of this first round. We’re going to stay focused. So why not? Keep scoring, so that we can advance.”

Ngachu knows Japan head into the game as very heavy favourites and should win comfortably, but whatever the result in this one, the impact that his Cameroon side have made back home has already been immense and if they can advance beyond the group stages, then what it will do for women’s soccer in the country will be seismic.

“Football is full of surprises,” he said. “If we can create that by going through to the next round, then it’s going to be very fine, and I believe if we do that, it’s going to have a positive impact back in Cameroon.

“From the feedback we’ve been getting, many young girls have started playing soccer and that is the target for the individual Lionesses of Cameroon.”