The Vancouver Island Soccer League (VISL) is back in full swing this upcoming weekend.

With the added Island pro team in Pacific FC, there is no shortage of soccer action on the Island, and there is no doubt that players are motivated.

Our top flight, Division 1, has the following games on tap for the weekend: 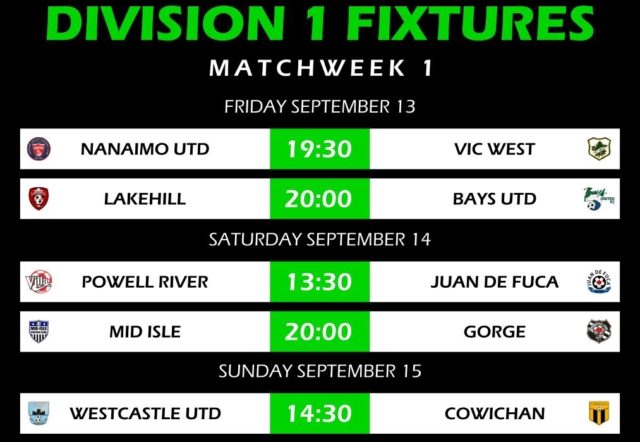 There are many questions to ask in starting out the year.

– Will Nanaimo United and Vic West regain their form from two years ago?

– Will a loaded up Lakehill team start strong and finish strong?

– Will Bays Utd keep up with the rest of the pack?

– How will the two promoted teams, Powell River Villa and Juan De Fuca All Flows, fare?

– Will Mid Isle and Gorge pick up from their disappointing form last season?

– Can Cowichan be a six time repeat Division 1 Champion and lift another Garrison Cup?

– Will the Westcastle group get back to the big dance?

We obviously look forward to the weekend and answering these questions and more.

Our VISL Game Of The Week should be a beauty and takes place on Sunday afternoon at Victoria’s Royal Athletic Park.

Besides being a League game, it will also double up as the Cup Winners Cup. Playing for a trophy that originated from 1904, it is in its second year of competition, with reigning Jackson Cup champions Westcastle hosting the Division 1 champions Cowichan. Kick off is 2.30pm.

You can find all of this weekend’s fixtures, and a lot more, on VISL.org.